Look!  We have real food today! 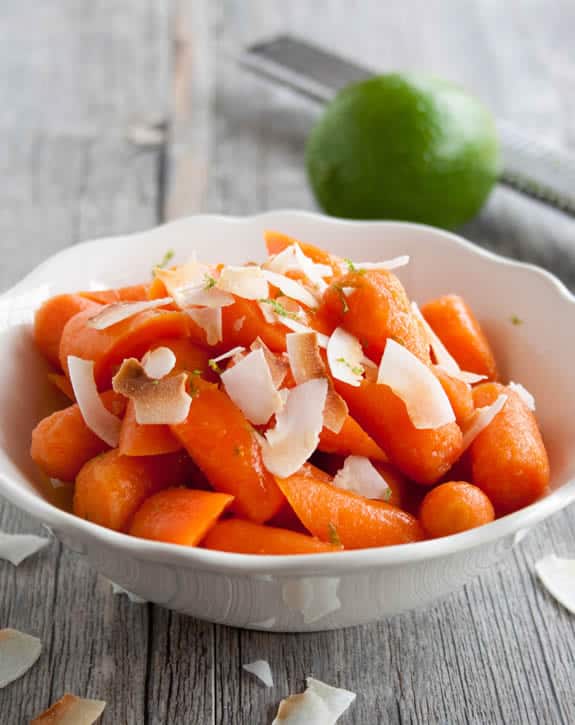 Okay, it’s still on the sweet side, but it’s not dessert.  Today, we’ve got Pineapple Coconut Glazed Carrots. Normally, I would go the orange route with the glaze.

But having made Orange Olive Oil Cake and then Orange Buttermilk Pancakes with Fresh Citrus Syrup, I thought I’d move on to another fruit flavor and make something new.

I’ve actually been testing some recipes with pineapple and coconut, but they aren’t ready for prime time just yet. This one, however, worked out on the first try.

I think it’s great having tried and true classics and I have made orange glazed carrots more times than I can remember.

It’s the same with my sweet potato casserole recipe.  I had been making the same one that I’ve loved since childhood, but last year, I decided to cook outside the box and made Orange Vanilla Glazed Sweet Potatoes.  And guess what?  We loved them and crowned them a new favorite! 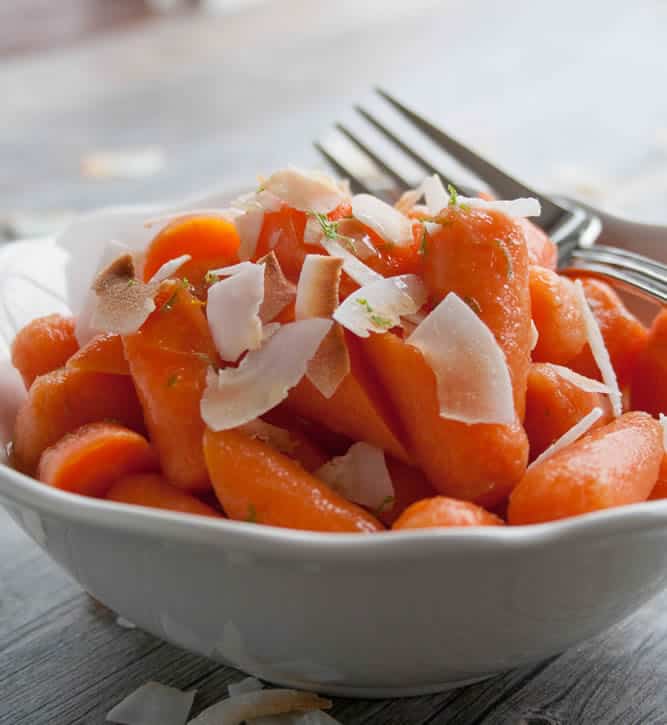 I used baby carrots for this recipe.  I wouldn’t normally take that short cut for carrots that I’ll be cooking; I find that fresh whole carrots have more moisture and flavor.

However, on the day I came up with this idea, I had a bag of baby carrots and went with it. It was just going to be an experiment, after all, and I wasn’t sure that the whole idea would even work. I started by cutting them on the bias (diagonally) to make them look less like the ubiquitous orange logs that they are.

Then, I simmered them in coconut milk until they were just fork tender.  When they were done, they were a bit lighter in color having bathed in the coconut milk for a bit.

Then it was time for the glaze. I drained a can of crushed pineapple and ended up with about a cup of unsweetened pineapple juice.

The juice was cooked with some brown sugar until it the bubbles were stacking on top of each other and the liquid reduced to about 1/4 cup.

I then added back in about 1/2 cup of the coconut milk reserved from cooking the carrots, gave it a pinch of salt and poured it over the cooked carrots.

I topped it with some toasted coconut and resisted the urge to add some orange zest.  Instead, I went with lime. That was a good move and helped balance out the sweetness from the glaze. And, the deep green color was a pretty accent to the orange carrots.

But I have to confess, the next day, when I heated it up for dinner, I looked at the left over pineapple sitting in the refrigerator.  I thought, why not?  The pictures are done, it’s just Sunday dinner with the family now. We all love pineapple.

So, I took a scoop out and stirred it into the carrots, following the original plan.  Another good move. (Sorry, no photos of that, but I included both options in the recipe.) 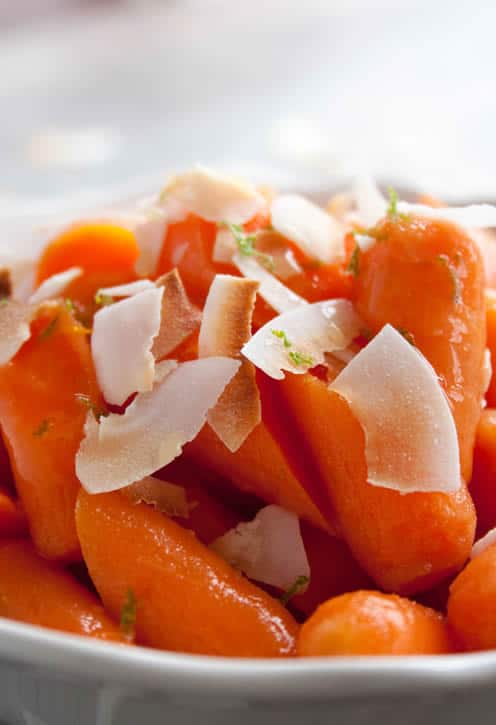 Then, I kind of planned dinner around the carrots.  We started with a salad of spring greens topped with roasted beets, goat cheese, slivered red onion and oranges.  I pan fried some pork chops, finished them in the oven with some smashed roasted potatoes and served the carrots with the added pineapple.

The extra pineapple in the carrots helped mimic a classic “pork chops and applesauce” meal but with more tropical flavor and certainly, more texture. The coconut milk made the dish taste just a bit creamier than with an average glaze. It’s a change, but not so dramatic as to not have mass appeal.

We were four for four at dinner last night on loving the new carrots and my husband isn’t even a huge coconut fan.  I think it would work wonderfully as a new side dish for an Easter ham.

So, break out the pineapples and coconut and take a risk.  Pineapple Coconut Glazed Carrots. Really, where glazed carrots are concerned? 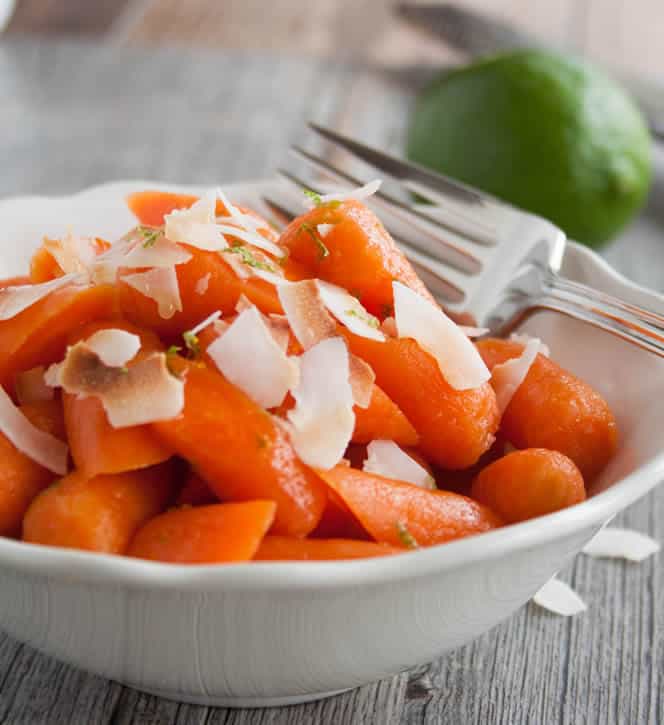 *One way or the other, you're going to have some leftover coconut milk from cooking the carrots and you may have some leftover pineapple, depending upon which way you made the recipe. Don't let them go to waste, they would be great added to a smoothie.

*The glaze makes about 3/4 cup, plenty to cover the carrots and plenty if you decide to add any of the pineapple back into the dish, which I would definitely do if you need a fruity side dish.

*You can make this dish ahead of time and refrigerate, covered until ready to serve. Then, you can either heat it up on the stove or in the microwave, then top with the toasted coconut and lime zest, just before serving.

*If you decide to skip the pineapples and can't find unsweetened pineapple juice, use a sweetened version and reduce sugar to desired sweetness.

So creative! Love the combination.