I don’t know about you, but the past few weeks have been a little crazy. I’m beginning to think that’s the normal hum of life these days.

It’s the perfect time for a recipe with a short cut involved, don’t you think? This particular recipe is going to be one of those semi-homemade type deals, but in the very best way.

And, then, Oreo brookies became a thing after this post on Kevin and Amanda back in 2011. 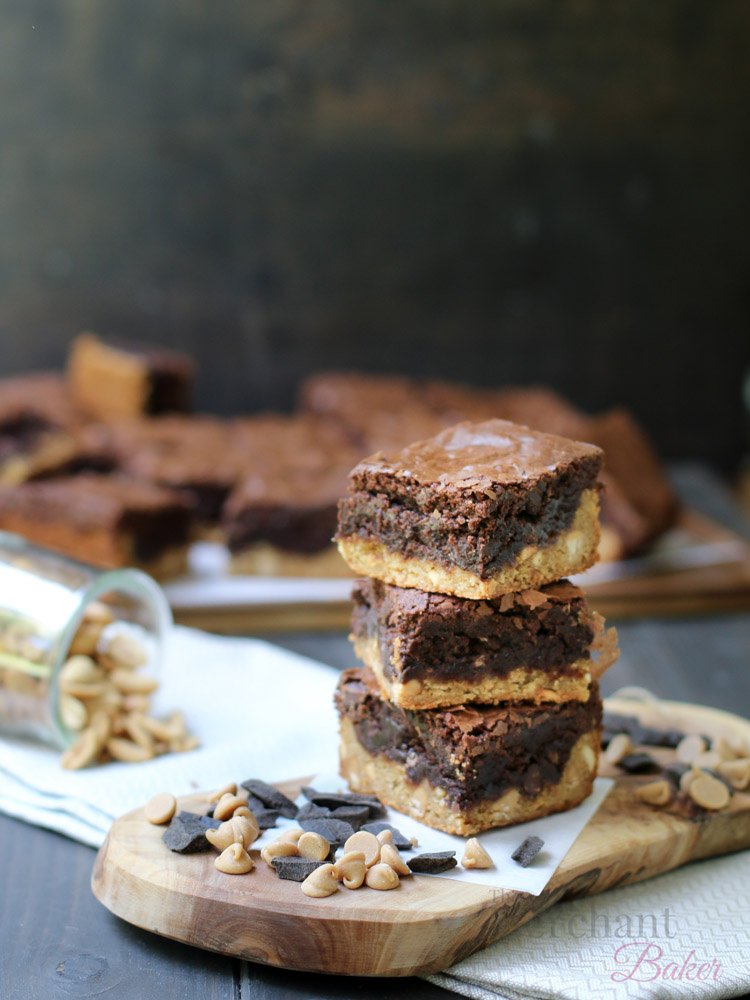 I remember seeing that tower of brookies covered with ice cream, drizzled with chocolate. That’s when I jumped on the brookie trend and subsequently became obsessed with making them.

And make them I did. I took them to friend’s houses. I made them for class parties and school bake sales. I even spent time on pretty labels and packaging for those bake sales. (Yes, I was “that” mom.)

In fact, they were my choice for my very first school bake sale. It was a Valentine’s day bake sale. You can flashback with me for a moment to check out a few photos from those days….here, here and here. 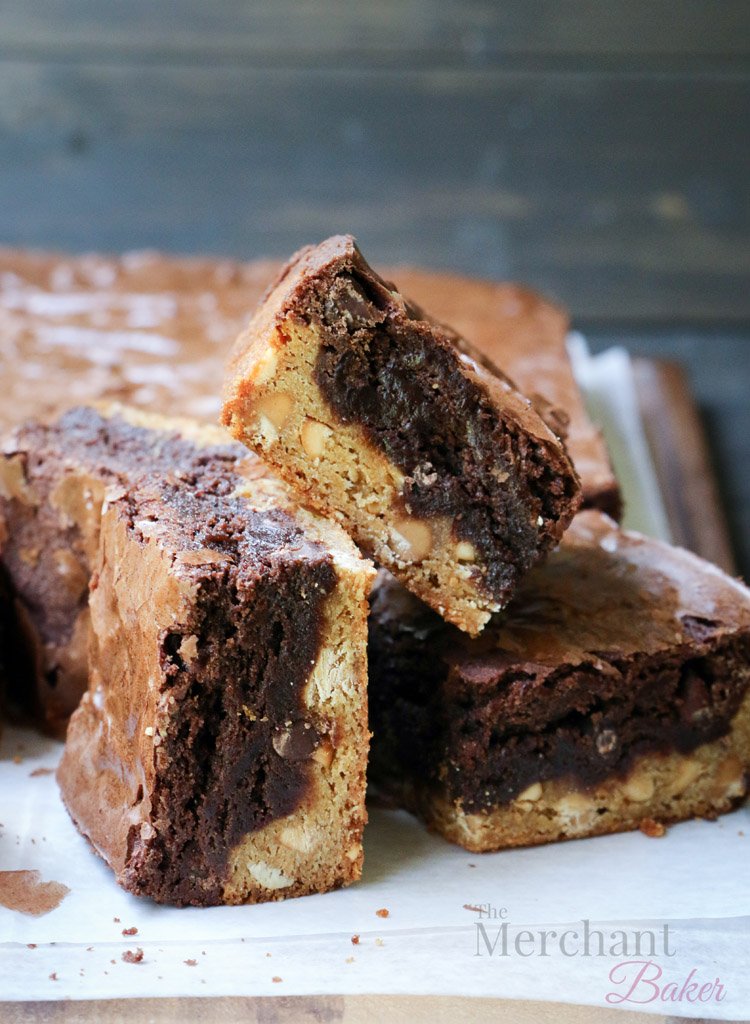 I would scale the recipe up and make them in a 16″ square pan. Yeah, that’s a lot of brookies. But, you know what they say….go big or go home.

(Of course, that was before I started this blog, when life was simpler and I didn’t worry that I was spending time making the same recipe multiple times instead of trying to always make something new and different for the blog ;) 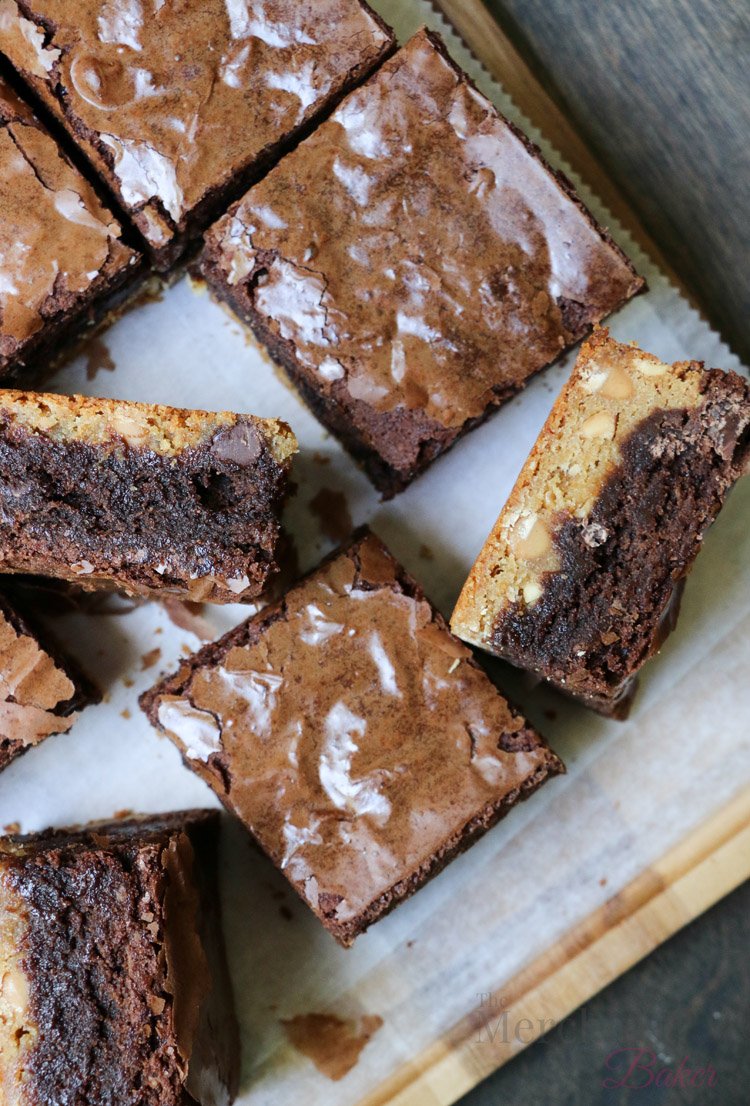 If somehow that whole trend eluded you, it’s never too late to jump on the bandwagon. You have no idea how good an Oreo baked between chocolate chip cookie dough and brownie batter can taste. Really. It’s so good. Definitely not to missed by those of you who love bar cookies.

Today’s recipe was inspired by those brookies but sans the Oreo.

I happen to love peanut butter cookies and have always wanted to try them with brownie batter. I know. It’s been done. I’m not inventing something out of the box new here, just sharing my version of something delicious. 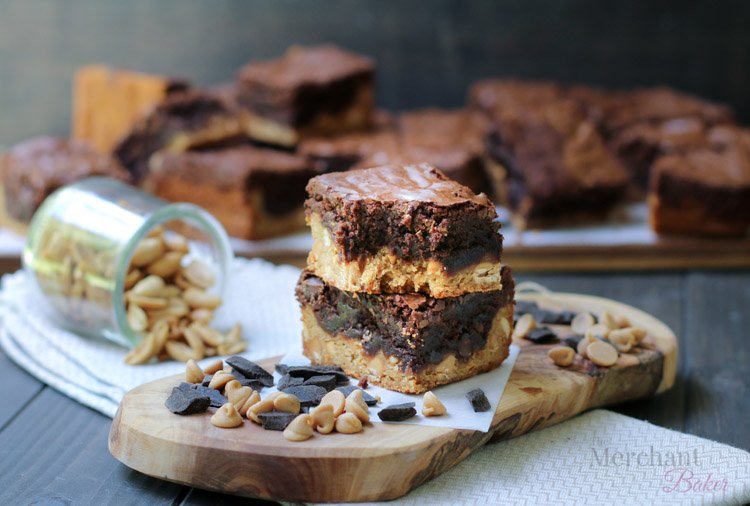 The truth is that I don’t yet have a go to peanut butter cookie recipe that I’m head over heels about, otherwise this might have happened sooner.

I LOVE a good peanut butter cookie, but so often, they tend to be either too crumbly or too soft. I don’t think this is necessarily a difficult task, I just haven’t spent the time to find one.

In any case, I didn’t have a peanut butter cookie base for my recipe.

Then, I remembered a post I did way back in the early days of this blog (yep, you can tell the age by the “lovely” photographs in that post.) That post was for Triple Peanut Butter Blondies.

I knew the texture of the blondie would be a perfect texture match for a brownie, even better than a cookie.

I do love a good blondie! And, no, a blondie isn’t simply chocolate chip cookie dough baked into bars. Blondies have a different texture and a caramelly, toffee like flavor. 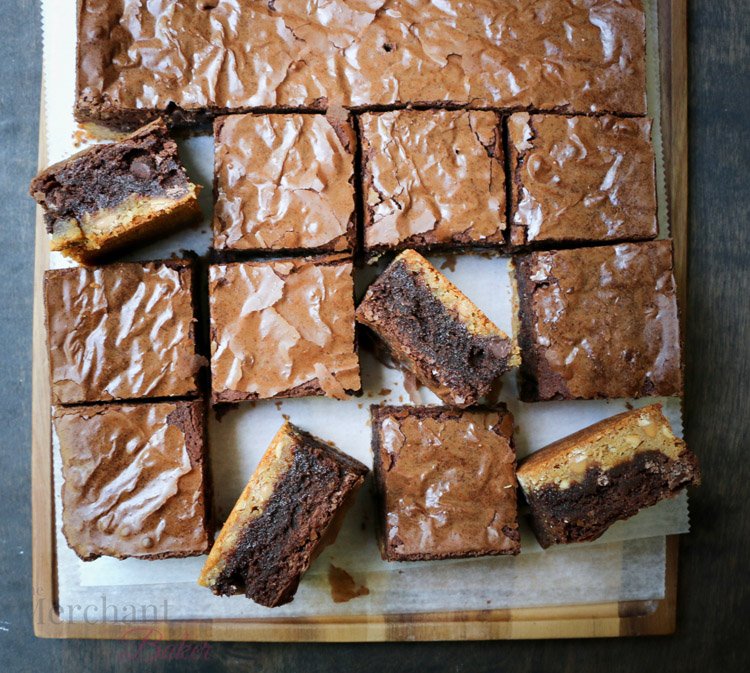 Of course, these peanut butter blondies are not quite a traditional blondie. The flavor is peanut butter forward, not caramel and toffee.

Even though they’re not traditional blondies, they are definitely a peanut butter treat I love. They are soft, but a little chewy. They have lots of texture from crunchy peanut butter and chopped peanuts. Peanut butter chips give them an extra boost of peanut butter flavor.

I know some of you might be nut in dessert haters, but I wanted that extra texture to help ground the brownie. I’m kind of hoping that because they’re actually peanuts in a peanut butter dessert, they’ll be more acceptable to you. 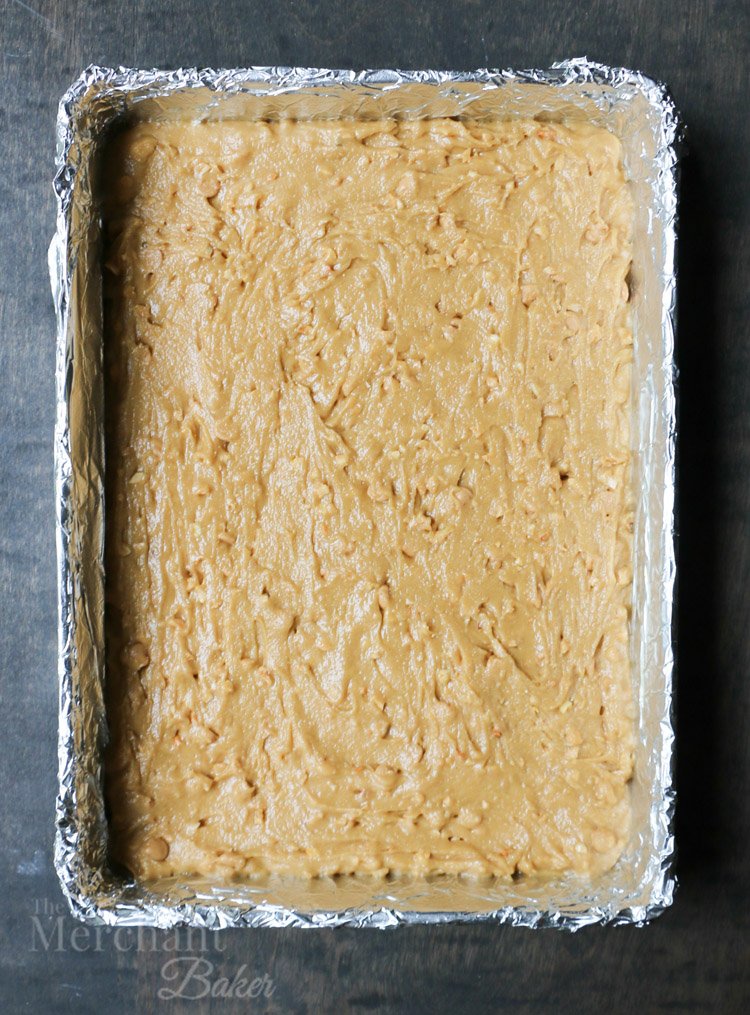 Me? I love the chopped peanuts! If you don’t, feel free to leave them out. It will change the texture, but they will still be good. I’ve never had a complaint from anyone who had one, so if I were you, I’d take the risk and go all in with the nuts.

The blondie portion mixes up pretty easily. It’s your typical cookie process….whisk the dry ingredients, beat the butter and sugar, add the eggs etc, etc. Spread it in a pan.

Now I wrestled a bit with ratios. Did I want equal blondie to brownie parts? Or, did I want a higher ratio of brownie to blondie? 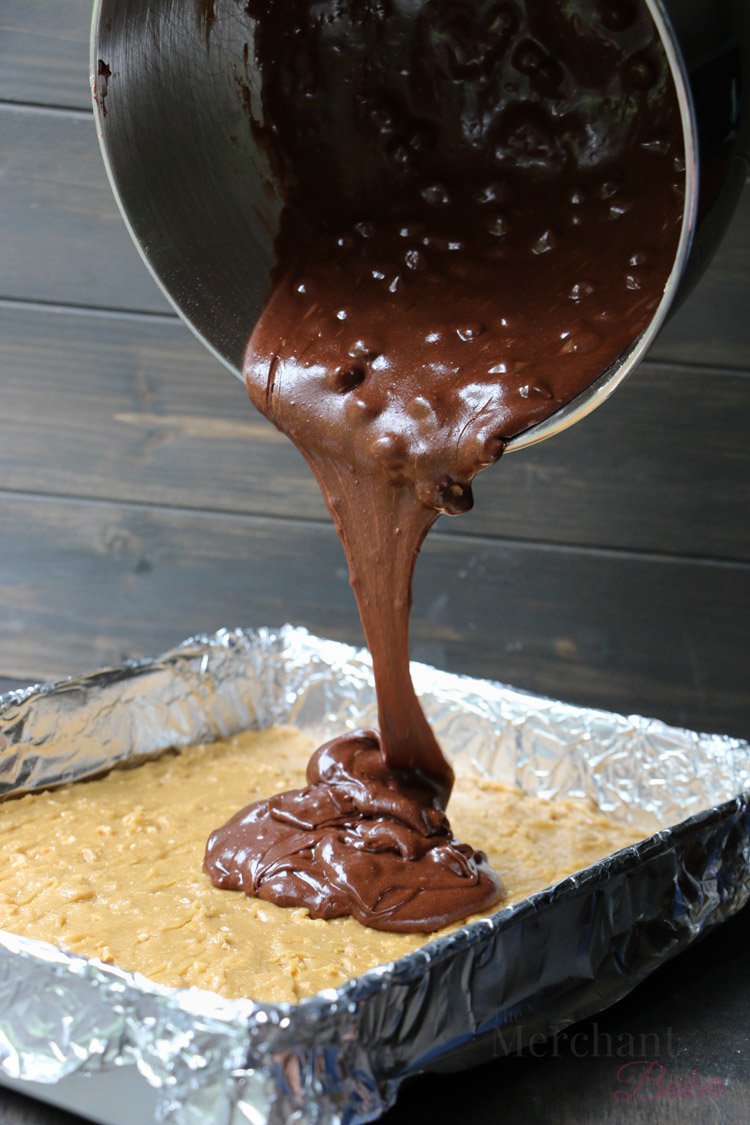 My husband weighed in with the philosophy that peanut butter is a strong enough flavor to shine through regardless of ratio. So I went with a high brownie to blondie ratio. But really, you can’t make a mistake with this one. Any ratio will be a delicious one.

I used a 13×9 baking pan. That’s the pan I always use for peanut butter blondies. It makes a thin, but chewy bar.

I happen to love this particular mix because it has chocolate chips in it and to me, it bakes up differently than the brand’s other flavors. I always buy the double chocolate, period, end of story.

This post may contain some affiliate links. We are a participant in the Amazon Services LLC Associates Program, an affiliate advertising program designed to provide a means for us to earn fees by linking to Amazon.com and affiliated sites. 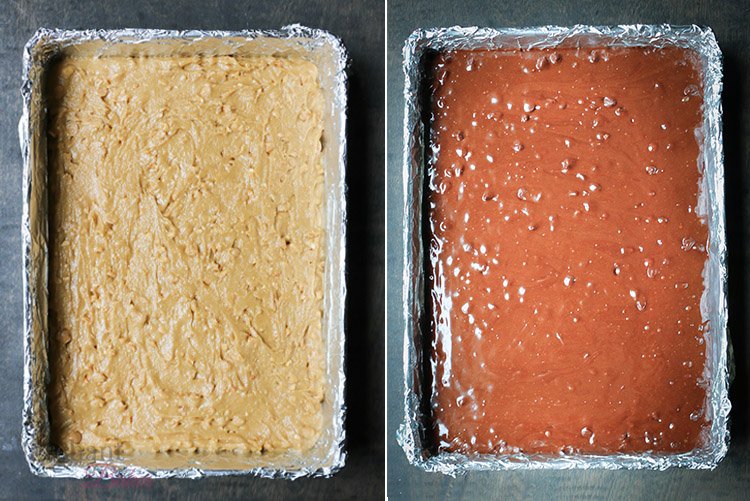 For this recipe, you’ll just follow the ingredients on the package. I bought two boxes, just in case.

After I mixed up and poured the first batch on top of the blondie layer, it seemed like I needed more batter. So I mixed up another box and added it.

Can I change the ratio of blondie batter to brownie batter?

If you want a higher ratio of blondie to brownie, I would spread the blondie batter in a 9″ square pan and use one box of brownie mix. That would be delicious as well.

Really, this is one of those things where you can’t go wrong. It’s like that Oreo brookie. All good stuff baked together usually makes all good stuff. That’s my kind of baking science ;)

I say that because I’ve been developing some recipes recently and the ole baking ratios have been quite a challenge to conquer. Stay tuned for that exciting day. I have finally conquered two long standing recipe challenges!

For this Peanut Butter Blondie Brownie, I was rather happy with how my ratio turned out. The peanut butter blondie layer sort of looked like a “crust” of sorts for the brownie. 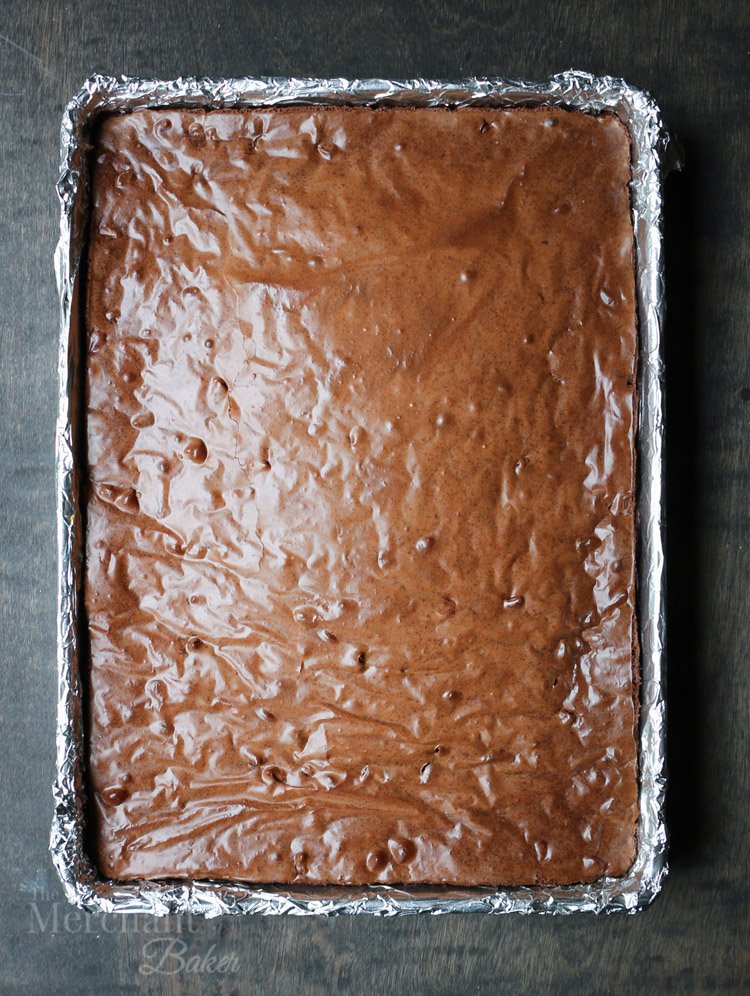 How big of a batch does this recipe make?

Because the brownies are so thick, this recipe makes quite a large batch. Because they were so thick, I didn’t need to cut super large squares. You could easily get 48 bars or more out of the recipe.

When I served them, however, I cut each bar diagonally. Some, I even cut in half again, for an even smaller, but still hearty bite. They were going on a dessert table and whenever there are going to be lots of choices, it’s good to cut into smaller portions. 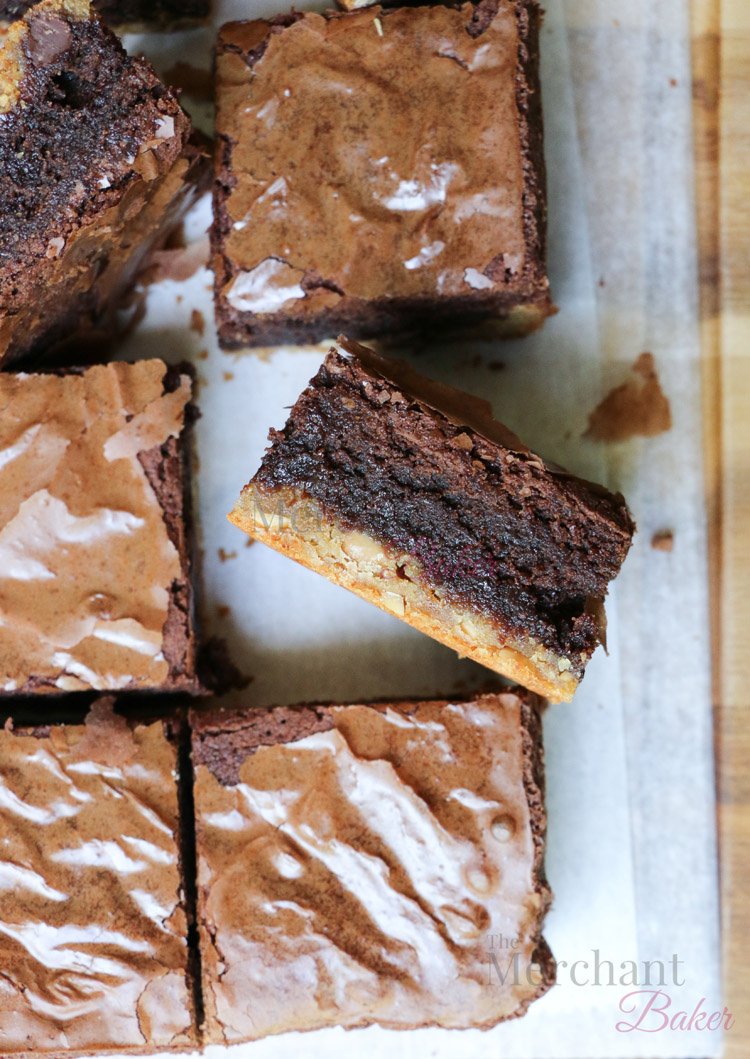 If you need a large batch, definitely go with the recipe as written. You’ll get 24 very hearty bars, or 48 nice sized triangles or even 96 bite sized pieces.

Or, you could bake the large batch and freeze half. I would wrap bigger bars in plastic wrap and toss them in a zip top freezer bag. Trust me. You’ll be happy to have them on hand when the craving strikes.

If you’d really like a smaller batch, go with the 9″ pan and one box of brownie mix as I described above. If you cut 4 rows by 4 rows, you’ll get 16 nice sized bars. Or, cut them again diagonally for 32. 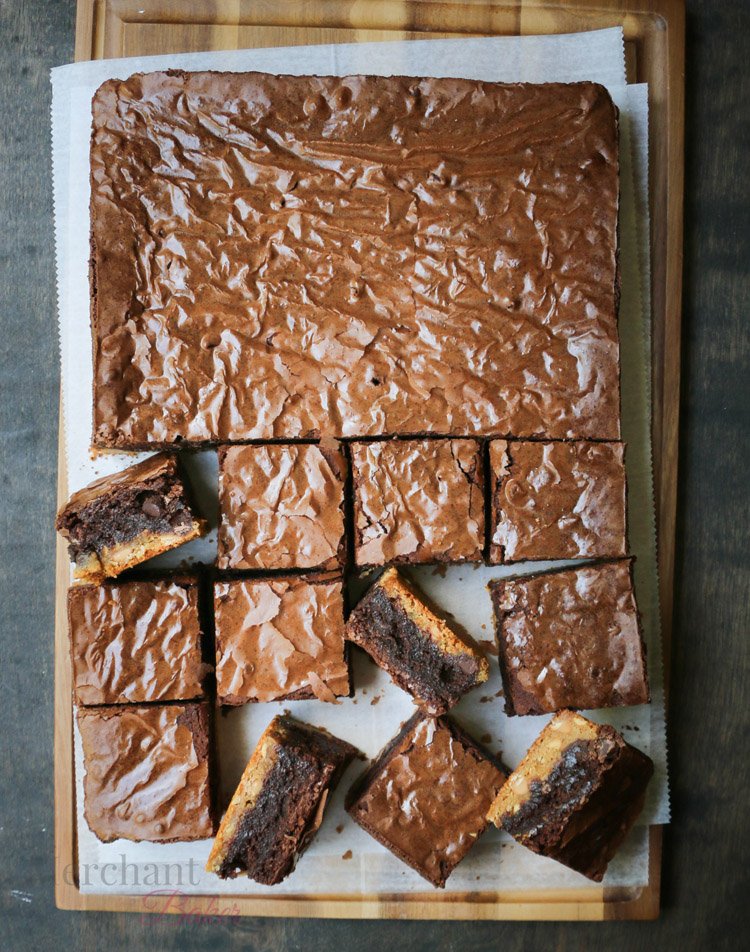 Can I make this recipe ahead?

Yes! Did you know brownies taste better the second day? So, go ahead and bake the recipe the day before and get ahead of the game.

How do you cut brownies into nice, clean cuts?

Let the brownies completely cool. Then, cover the pan, (uncut and still in the pan) with foil and refrigerate for a couple of hours until they’re thoroughly chilled. If I’ve made the brownies the day before I need them, I just let them refrigerate overnight and cut them whenever I’m ready.

Yep, that’s the secret of a clean cut. The bars should be chilled. After they’re cut, then you’re done with the fridge. You can let them come to room temperature and store them at room temperature.

(Of course, you could always heat them for a few seconds in the microwave and top them with ice cream and hot fudge…)

However you cut them, you’ll get a nice hearty bite of a peanut butter blondie that’s filled with peanut butter chips working as the foundation for a chocolate brownie with chocolate chips. Peanut Butter Blondie Brownies. They’re fudgy and peanut buttery and chewy and infinitely satisfying. 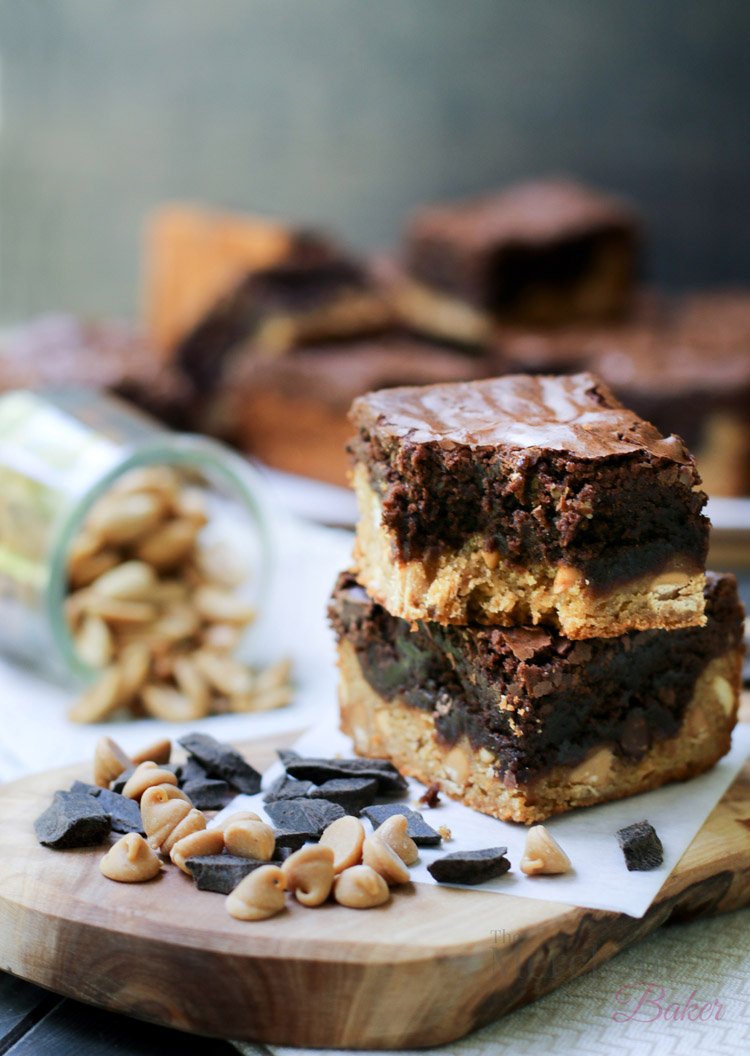 *VERY IMPORTANT-Make sure you check your brownie box for additional ingredients needed. For the two boxes I used, I needed a total of 2 eggs, 2/3 cups oil and 1/2 cup water. (I used Ghiradelli Double Chocolate Brownie mix.)

*If you use salted butter, reduce salt to 1/4 teaspoon.

*I baked mine for about 50 minutes and you can see they're still pretty fudgy. I might try baking them a few minutes longer next time to cook the brownie portion just a bit more. They were amazing as is, but I'd like to see the texture with a little more baking. For those of you who like a fudgy brownie, I think you'll be fine with 45 minutes, but use a toothpick to gauge your desired doneness.

*For the cleanest cuts, I allow the brownies to cool completely, then cover them with foil and refrigerate the whole pan until firm. Use the foil to lift them out of the pan and proceed to cut into bars. I often let them sit in the refrigerator overnight before cutting, if I've made them ahead of time.

*Once you've used refrigeration for cutting, they can be stored in an airtight container at room temperature.

*If you want to make a smaller batch, spread blondie batter into a 9" square pan and only use one box of brownie mix. Bake for 40-45 minutes.

Hi Debbie! Yep, these will freeze beautifully. I usually wrap each one in waxed paper or plastic wrap and then put them in a zip top freezer bag.