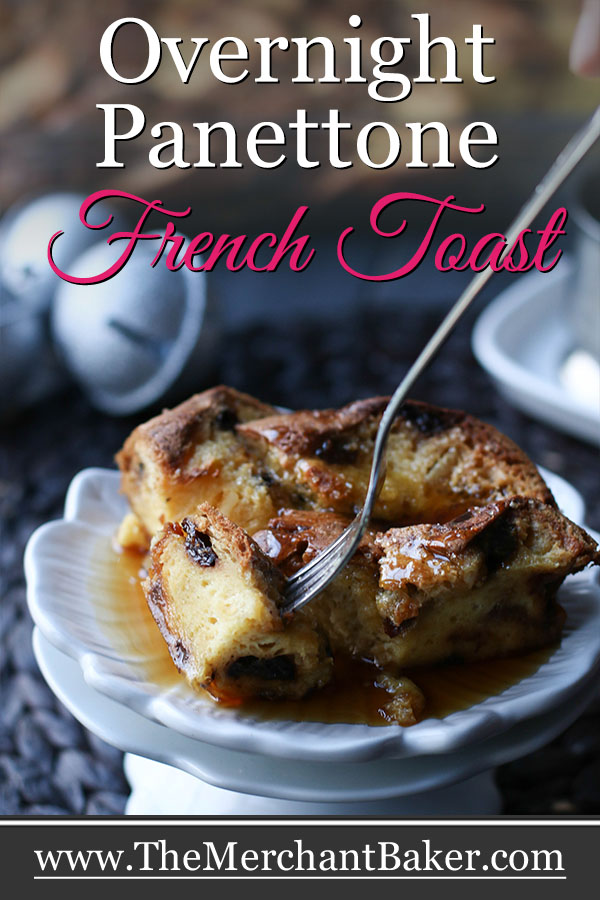 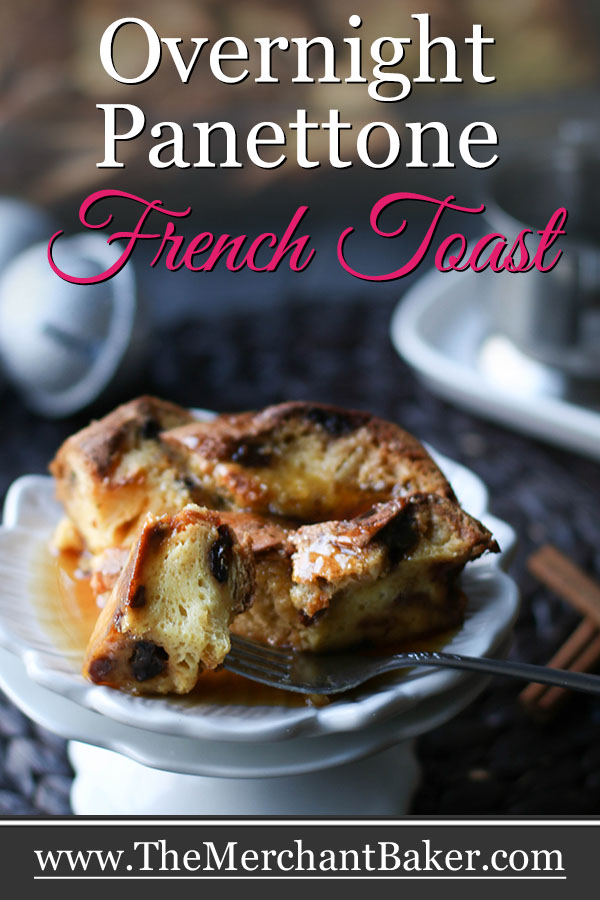 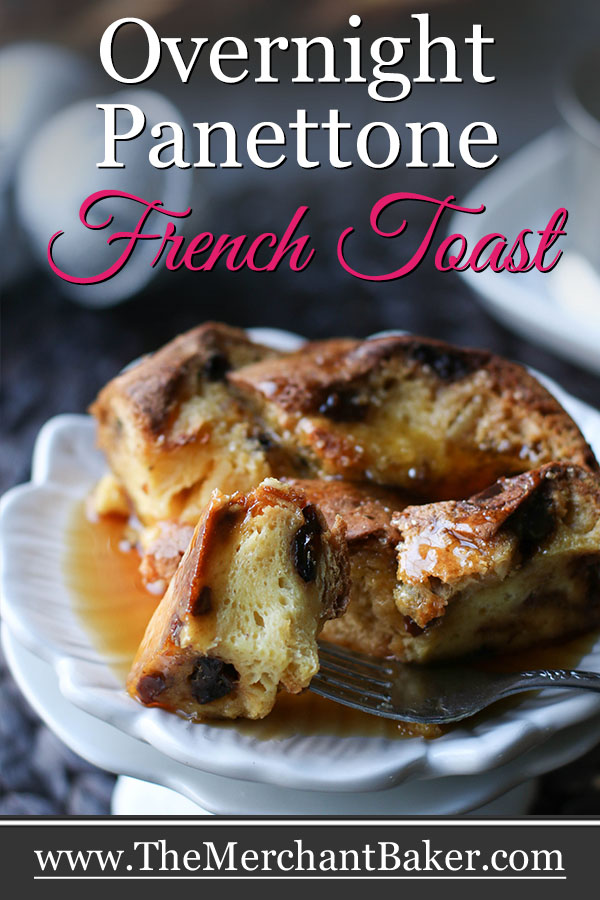 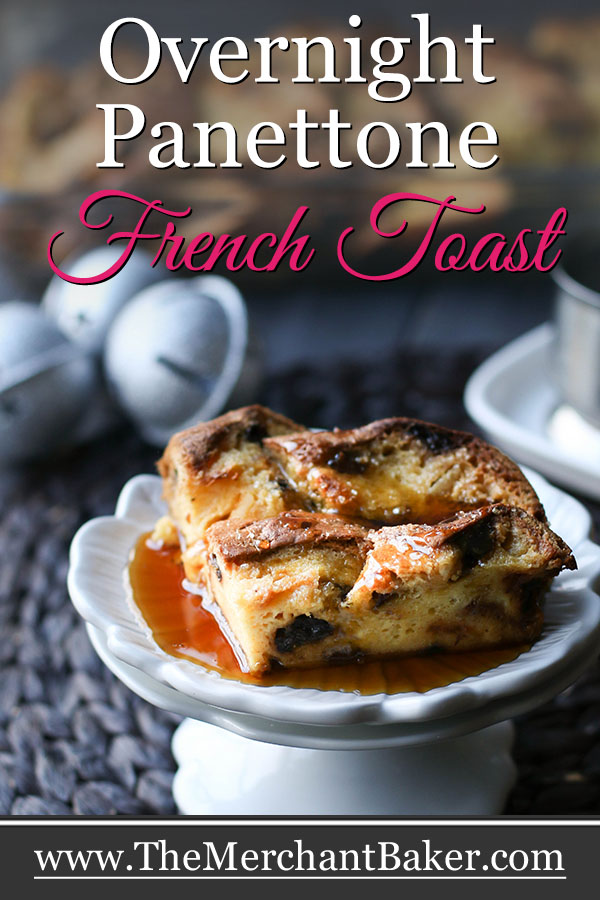 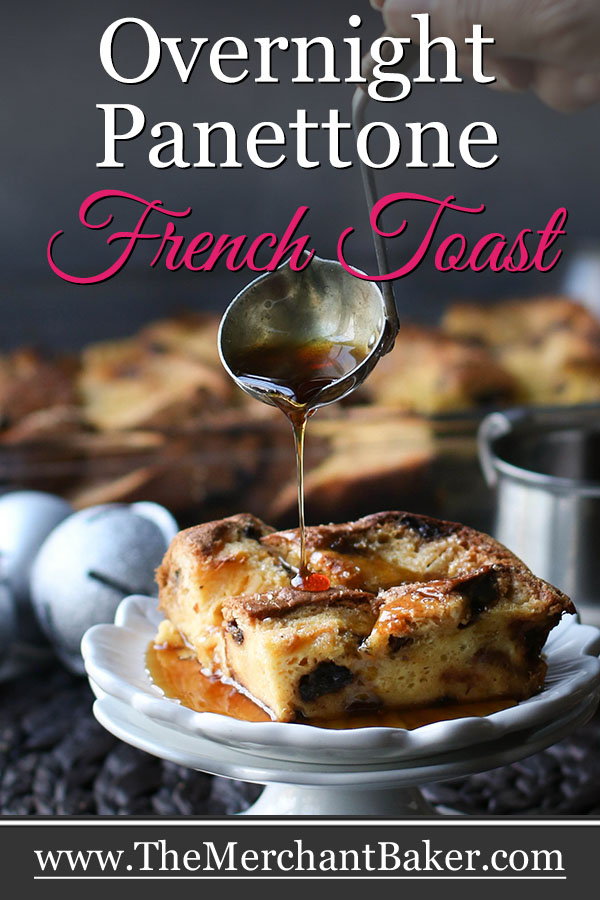 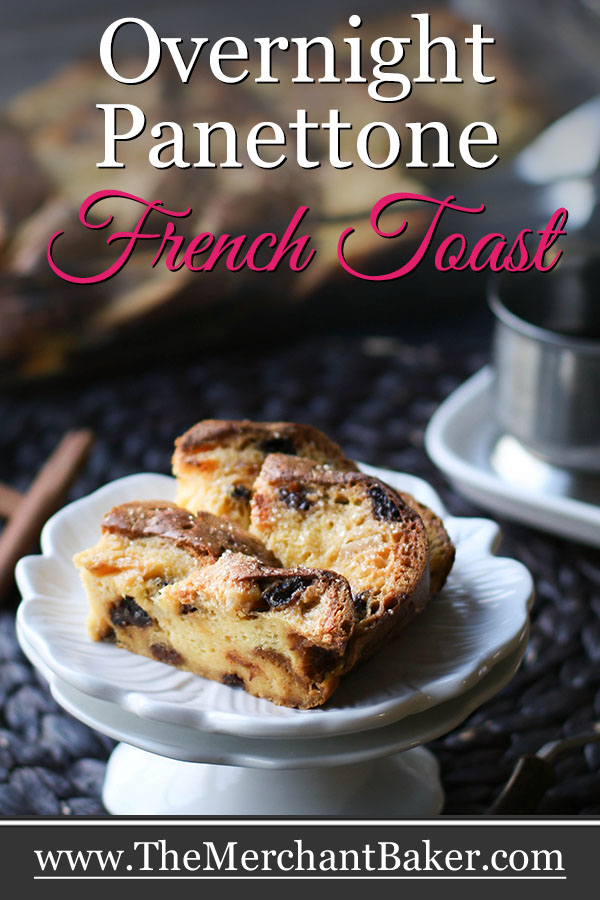 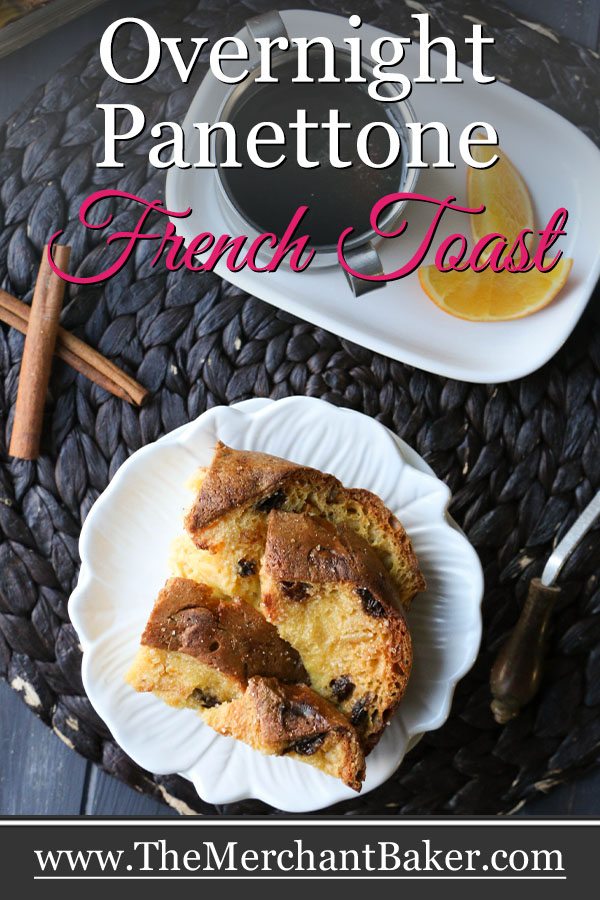 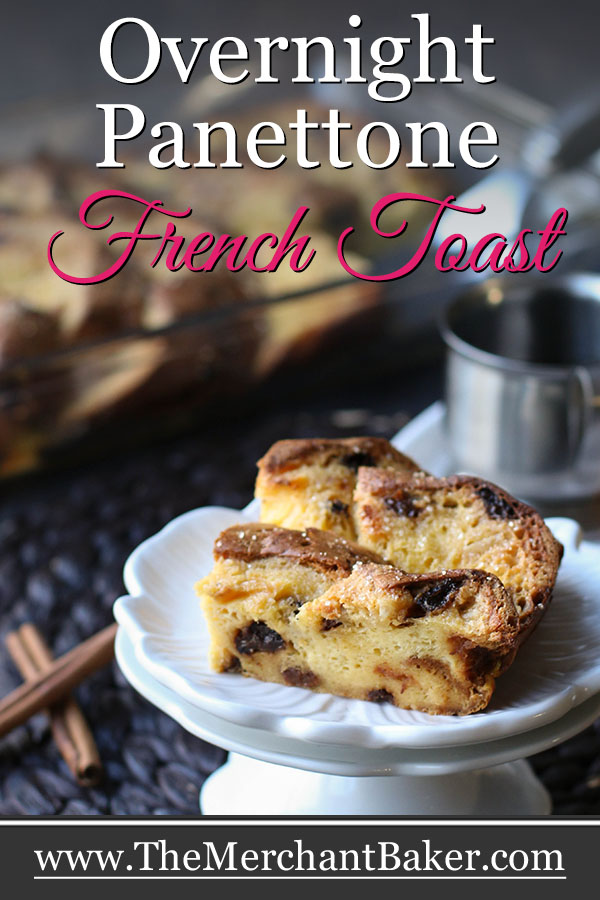 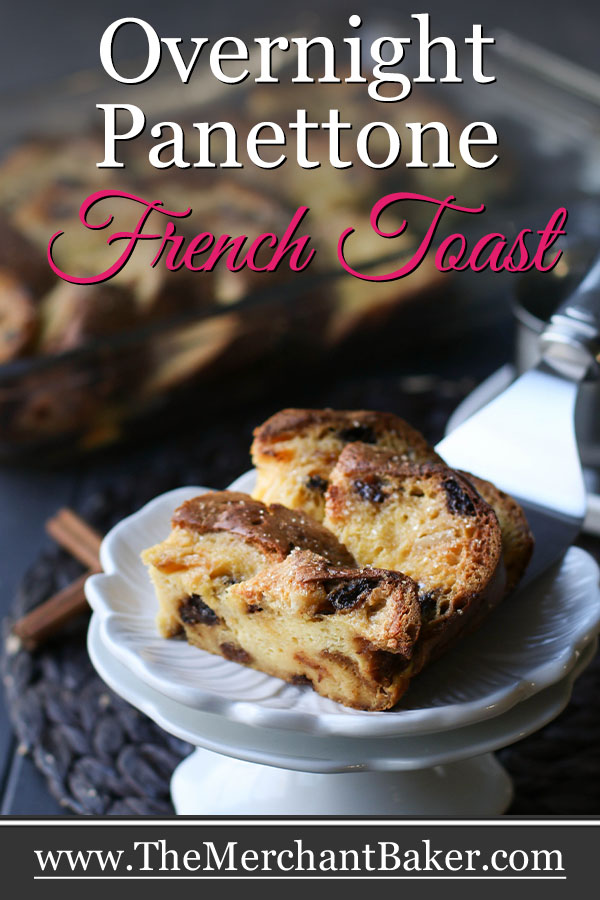 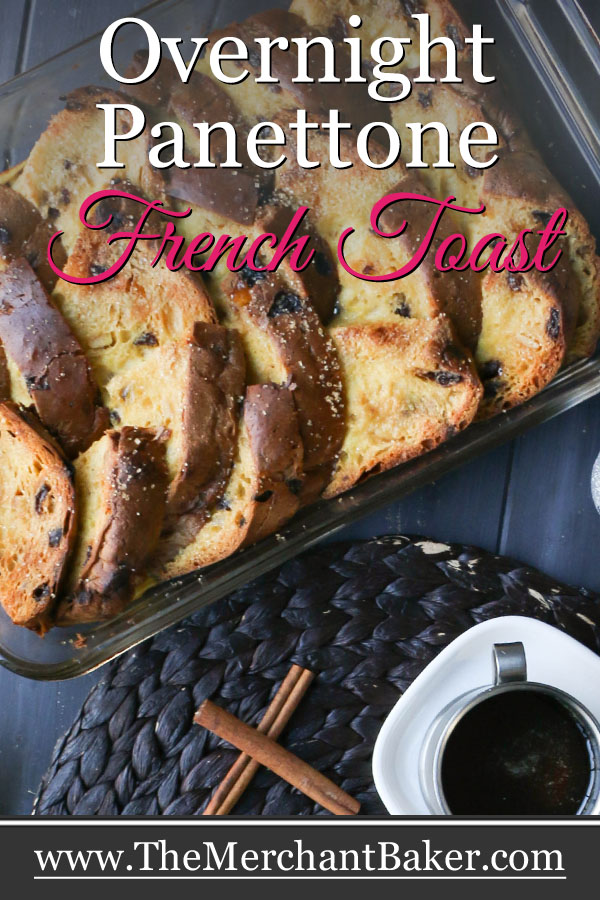 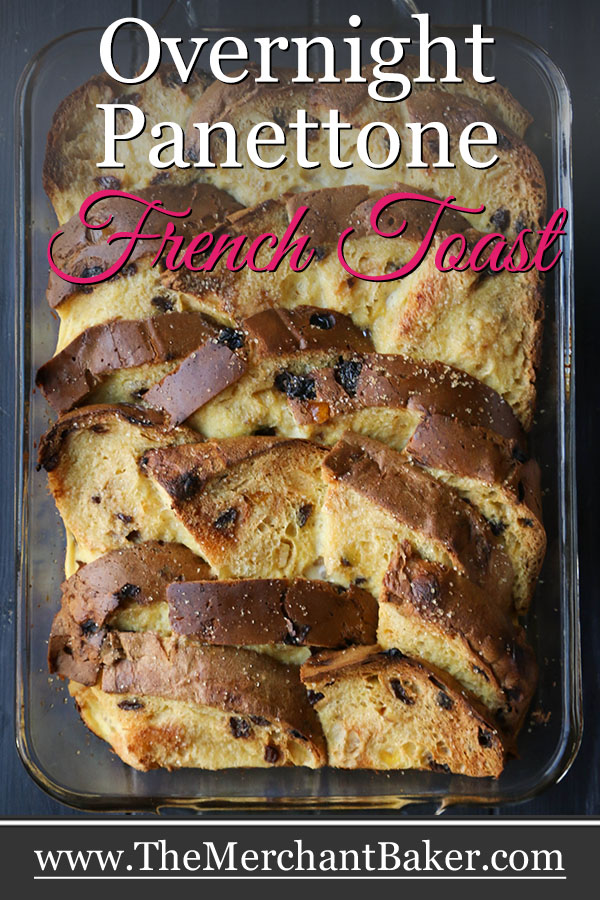 Get a head start on a special holiday breakfast with this easy Overnight Panettone French Toast. It’s as easy as mixing up a quick custard and pouring over thick slices of flavorful panettone. My panettone was flavored with raisins and citrus, so I made a quick orange spiced maple syrup to drizzle on top. Delicious!

You know I love make ahead breakfasts on a typical day (like my Big Batch Baked Oatmeal.) But, they’re especially handy around the holidays.

Overnight French toast bakes are a great choice when you want to get a head start on the morning.

Eggnog is pretty much a custard-like drink anyway, so it works perfectly when added to a French toast recipe. Really, what’s not to love? 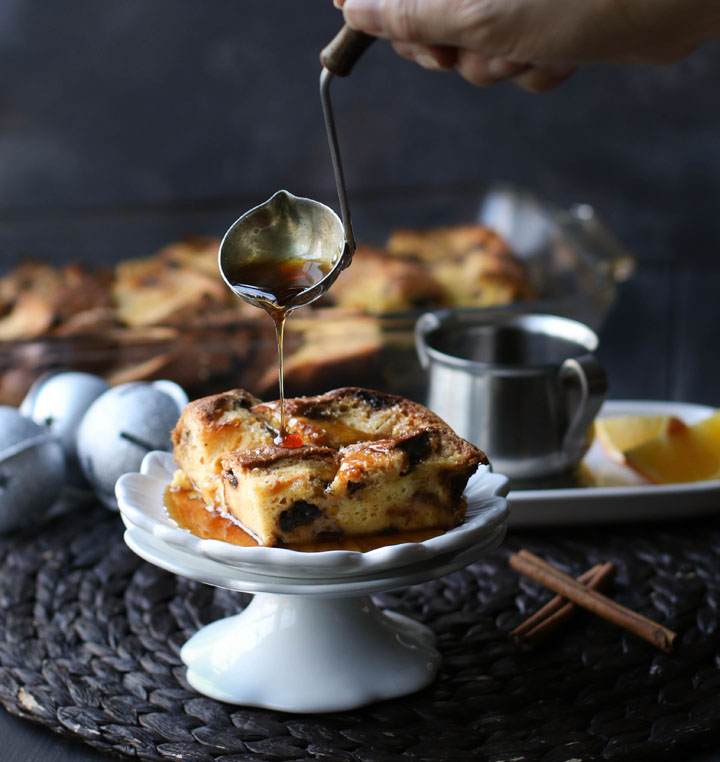 For that recipe, I used a sturdy and crusty Italian loaf.

Today, however, we’re starting with a different type of bread, panettone… 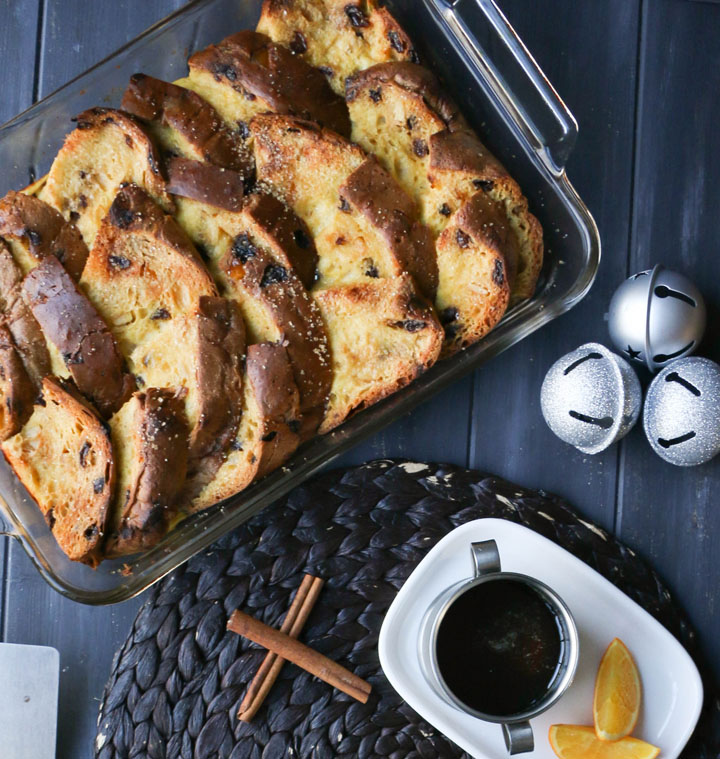 Panettone is an Italian type of sweet bread originally from Milan. It’s a yeasted bread, sometimes referred to as cake. I wouldn’t refer to it as cake, personally. It’s definitely more of a sweet bread.

It reminds me of brioche. And we all know that brioche makes lovely French toast and bread pudding…. 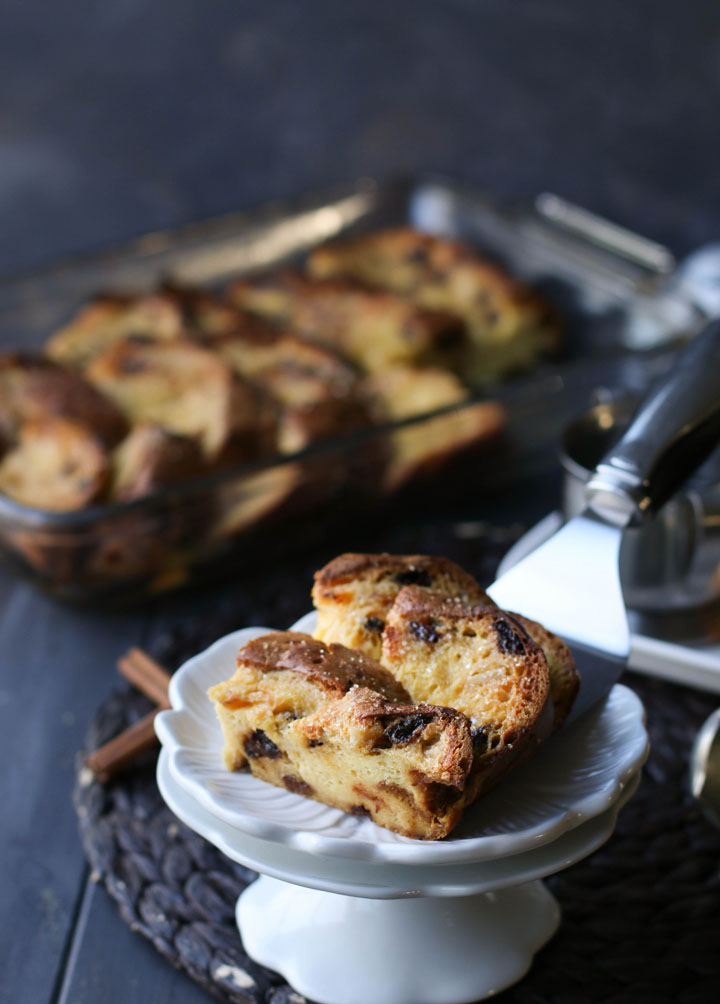 Where can I find panettone?

You’ll see the boxes everywhere during the holidays. I’ve seen them stacked at grocery stores. I’ve also found them in stores that sell Christmas items. I bought mine at World Market. (I ordered on line and did curbside pick up!)

The boxes come in all sizes, some are really cute individual sizes, perfect when you want to control your indulgence. But we’re making a whole pan of French toast, so we’re going to need a bigger loaf. 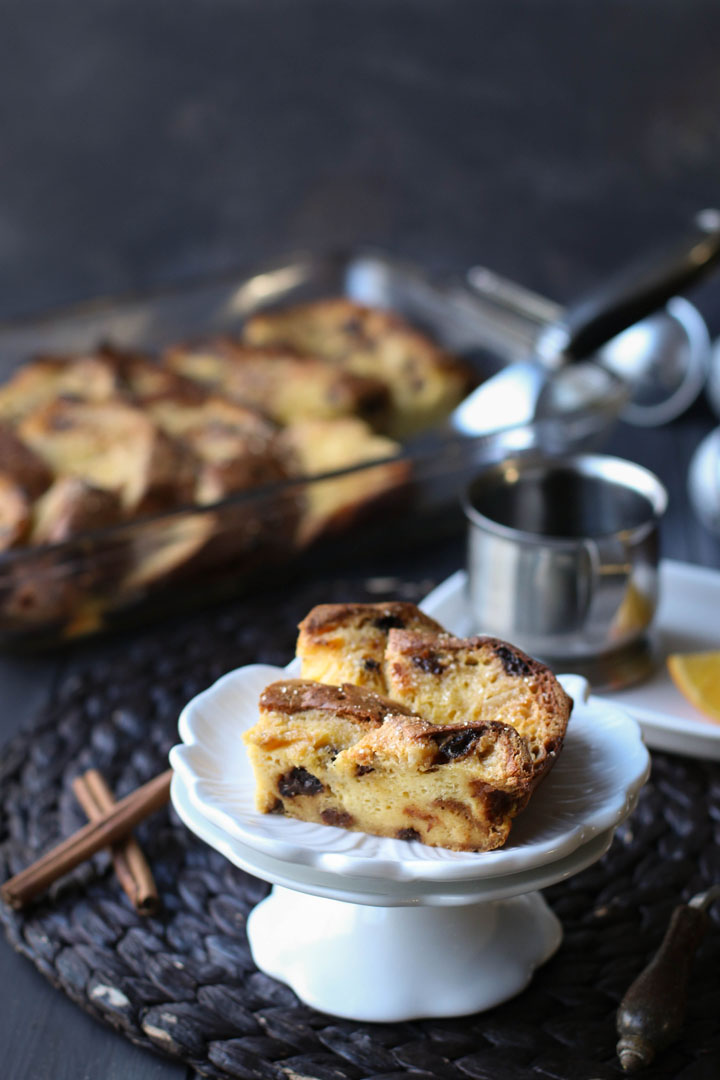 How much panettone do I need?

My loaf was a little over 26 ounces. I’d say it’s a pretty standard size. The size can vary a bit. You just want to insure you have enough slices to fill your pan and not so many that your custard ratio is off.

I would buy a loaf that’s at least 26 ounces and then save the leftovers to eat separately. 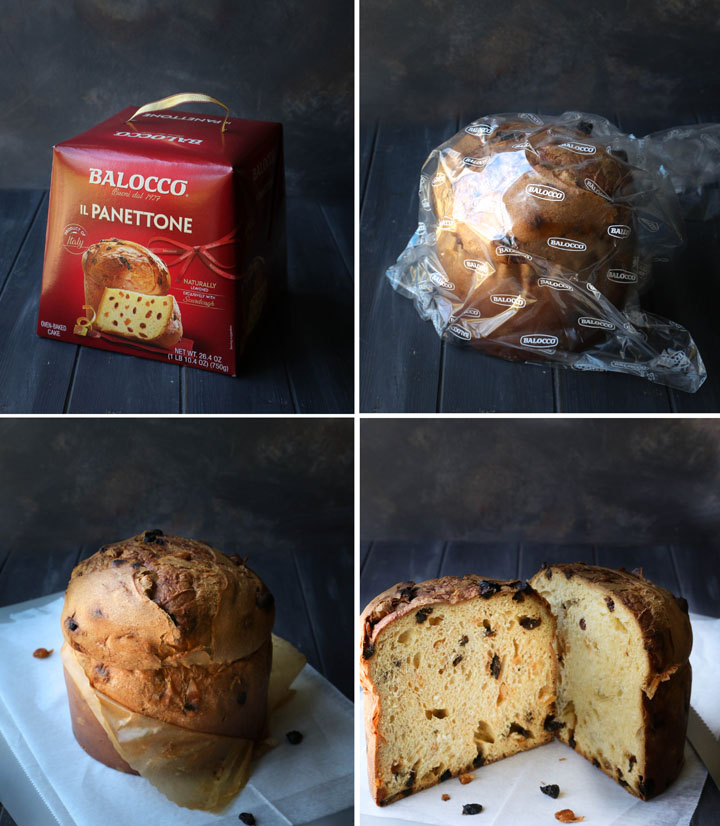 What kind of panettone is best for French toast?

My loaf was imported from Italy and had a short list of real ingredients. I like loaves that are made with real butter and eggs. Mine was also naturally leavened and made exclusively with sour dough. And no, it didn’t taste like a typical sour dough. it was perfect for this dish.

Beyond that, it was traditionally flavored with candied orange peels and raisins (sultanas.)

There are other flavors out there. Feel free to adapt this simple recipe to those flavors.

For instance, with chocolate panettone, I might scatter some mini chocolate chips around the slices and top with some cinnamon and maybe serve with whipped cream.

For an almond version, I might top with slivered almonds and make an almond or Amaretto flavored whipped cream. Maybe I’d add a half teaspoon of almond extract to the custard.

A lot depends on how much of that flavor is already added to your bread and what you want to accentuate. I might add a little pumpkin puree to the custard of a pumpkin version or Nutella to a hazelnut version. 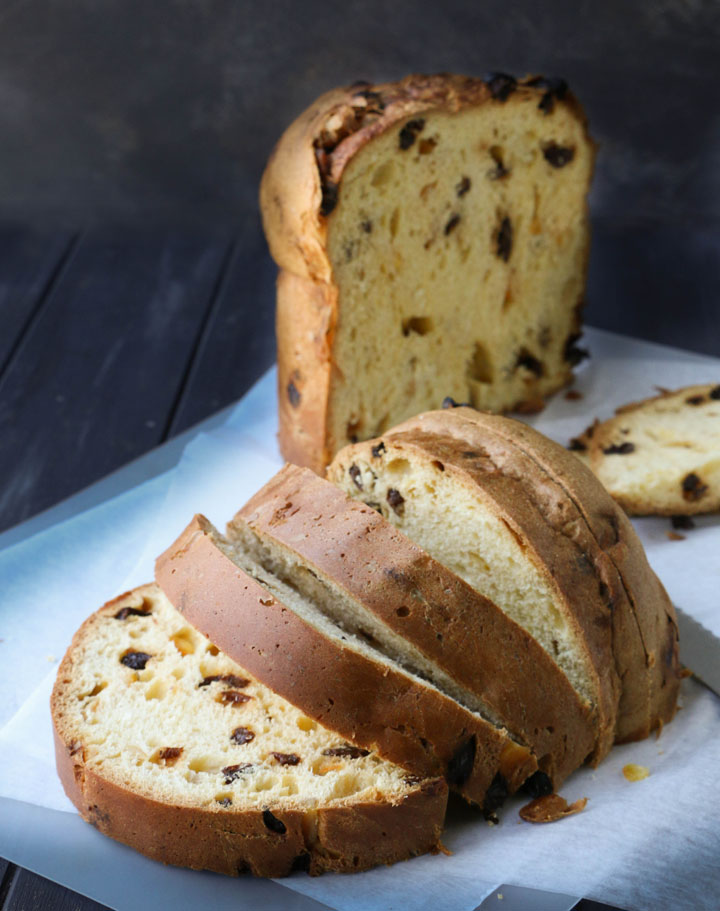 How to cut the panettone for French toast

You can cut the loaf a variety of ways. You could even cube it up as you might for bread pudding.

I like thick slices for an overnight soak. But, I also need slices that will fit nicely into my baking pan. So, this is how I did it…

First, unwrap the loaf…(and don’t forget the baking wrapper as well!) I cut the whole loaf in half from top to bottom. 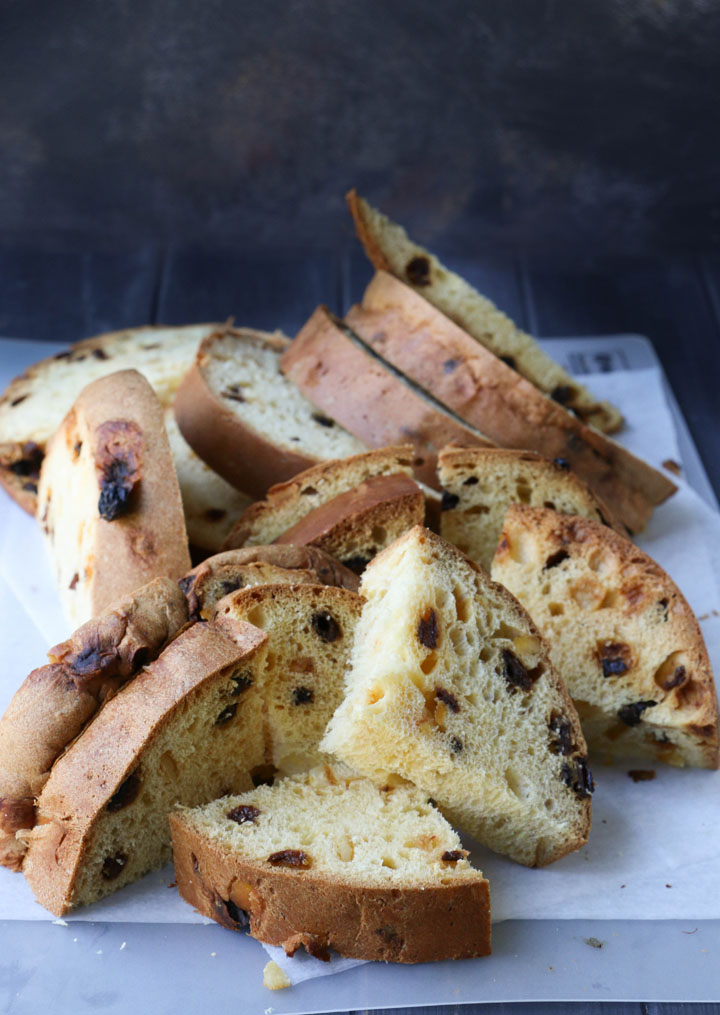 After I trimmed the top and bottom, I cut generous one inch slices. Those slices got cut in half again. These smaller pieces give me a bit more flexibility when layering them in the pan.

And that’s it! Just layer them, overlapping and adjusting as necessary to insure they all fit in and have filled the pan. 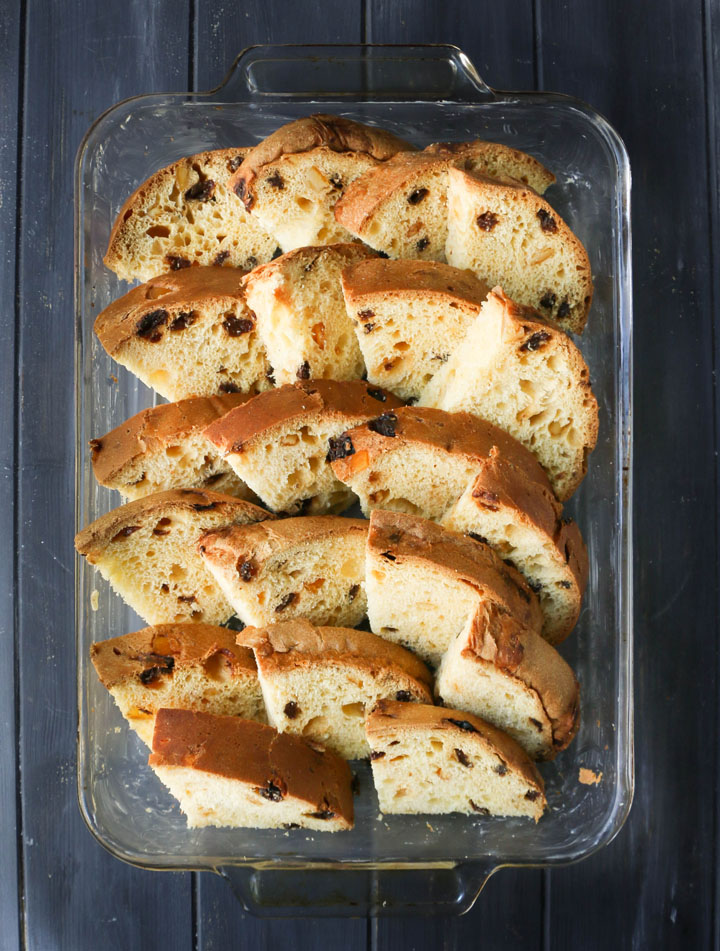 The custard is basically eggs, milk, vanilla and a bit of salt. That’s it. Nothing too complicated.

I used whole milk. I don’t think cream is necessary. You could sub in a lower fat or milk alternative, but depending on what you choose, just know that you might be giving up some of the richness in the custard.

For me, whole milk is already a splurge, so I go with that. I would have no issue going with 2% either. If I’m making a holiday breakfast, it’s probably not the time that I would be paring it down with skim milk or almond milk. But, do what you need to do to fit your needs.

And, I love adding some raw sugar to the top. It adds such great texture. Then, there’s syrup for those who want it.

In other words, I like to save some room for sweetness in the toppings.  So, there’s really no need for it in the custard. 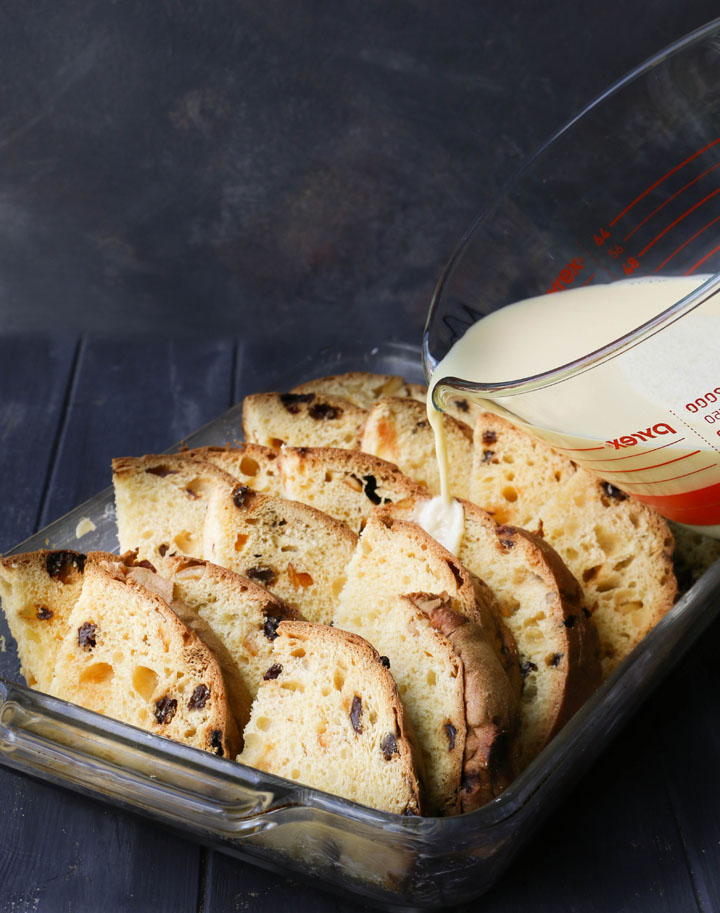 Simply pour the egg/milk mixture slowly over the slices of panettone arranged in the pan. Take your time and insure that every slice gets attention. You don’t want any dry pieces that didn’t get soaked.

This bread is much softer than the bread I used for the eggnog French toast. So, if you need to press the slices a bit to insure they’re all getting soaked, you can. Just be gentle about it or you’ll compress the bread too much.

Pressing the bread into the custard isn’t truly necessary if you’ve taken care to pour the custard mixture over all. So, press gently only if necessary. 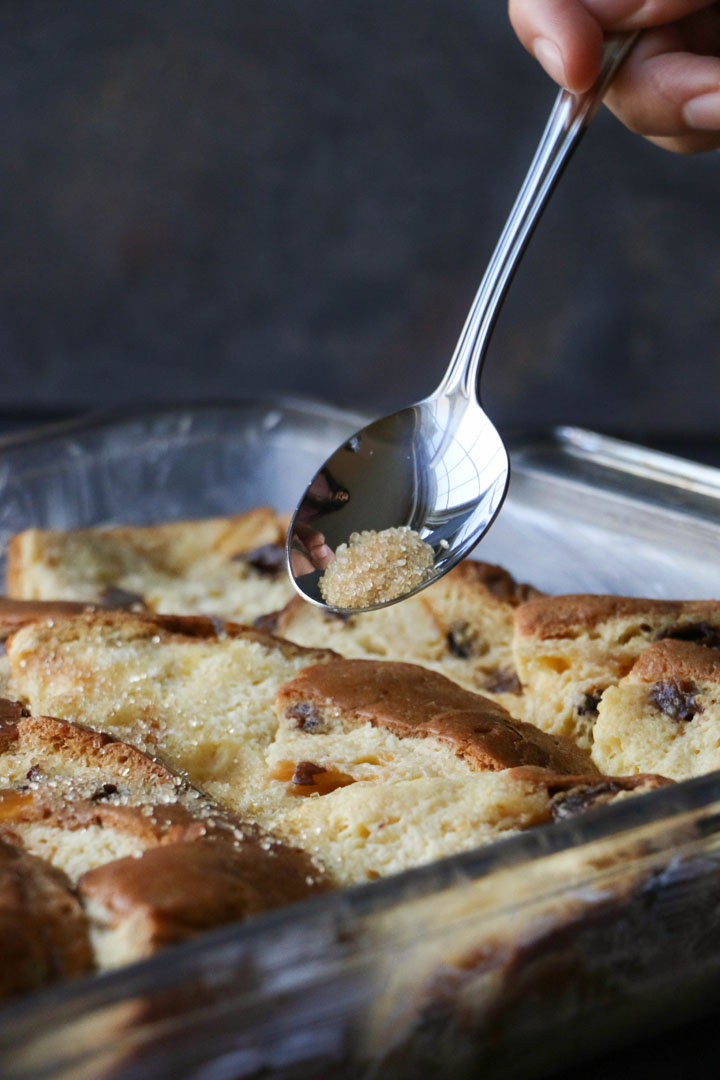 Can I make it the same day?

Yes. However, I do think it’s best if it soaks at least an hour or two. You definitely want that bread to have time to soak up the custard.

You could also just dip the slices into the custard and fry them in a pan as you normally would for French toast. This recipe is pretty adaptable to your needs. 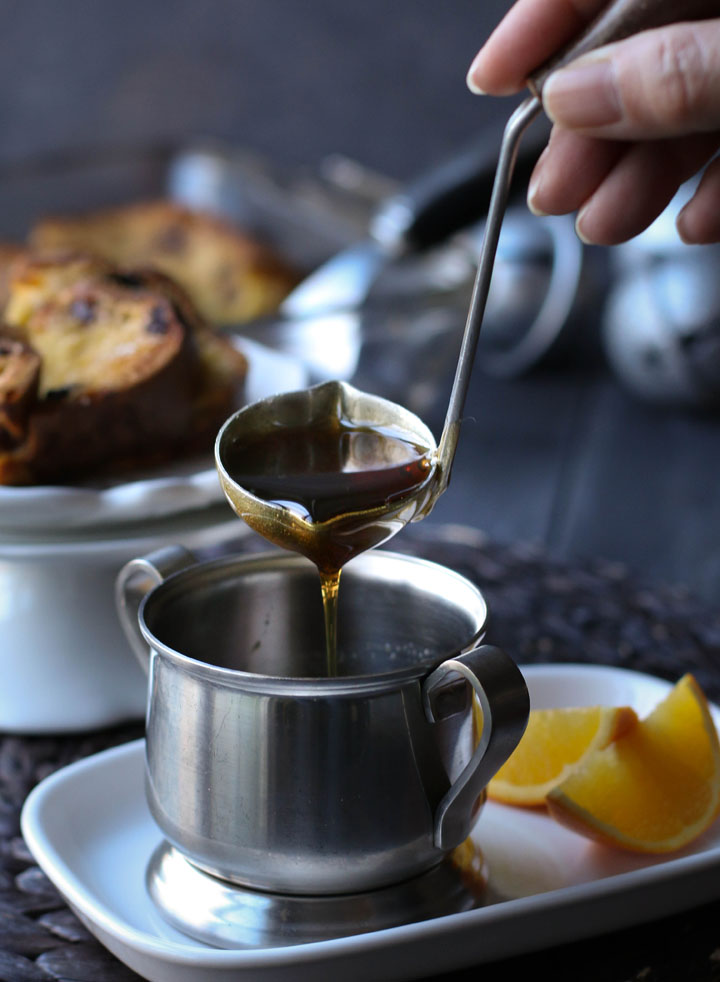 Ok…so you know how I love to make special toppings for pancakes, waffles etc.? Like the lemon curd whipped cream I used to top my Gingerbread Pancakes? Or, the brown sugar spiced cheesecake topping for my Pumpkin Pancakes? Or, even the *swoon* Walnut Syrup to top my Oatmeal Chocolate Chip Banana Pancakes?

Now, I wrestled with this recipe, because I honestly didn’t think the French toast would need more than a dusting of powdered sugar, if anything. But, after I made the syrup…well, it just punctuated that orange flavor so well! I had to add it as an option. 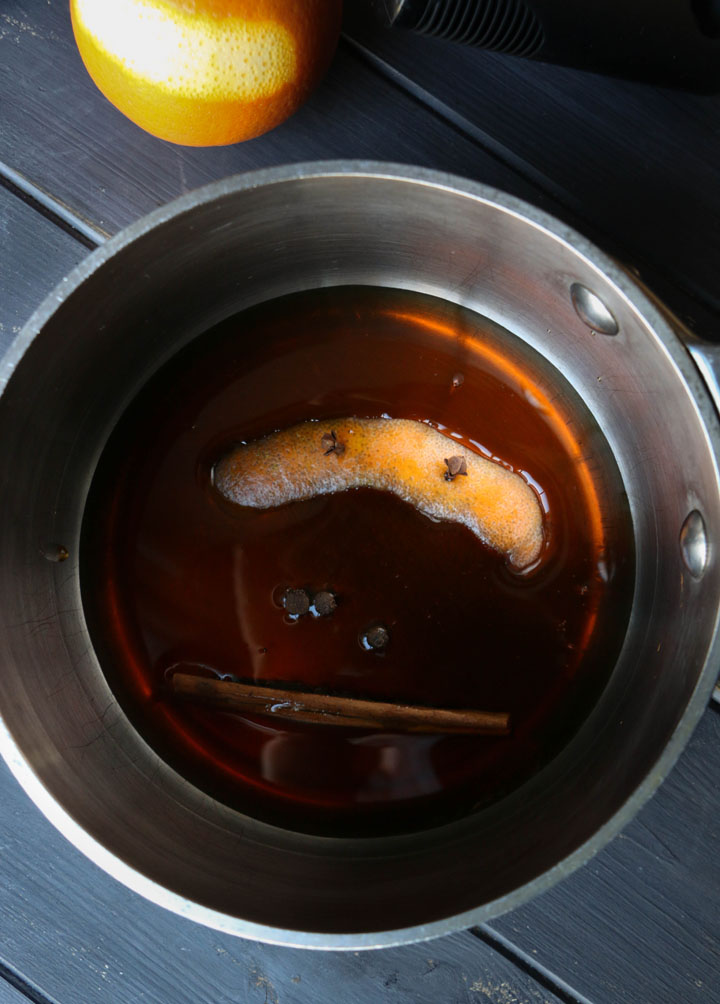 I simply added a strip of thinly peeled orange rind. Just use your veggie peeler. It will take 2 seconds.

Then, I stuck a couple of whole cloves into the rind. I used two. I could have used three. Then, I added a cinnamon stick and a few allspice berries.

Add those to the maple syrup and bring it to a simmer. Let it simmer for about 3-5 minutes. That’s it!

Now, the flavor gets stronger the longer you let it infuse. So, I tasted it right after it simmered. It had a nice hint of citrus and spice. It would have been totally fine to use it right then.

But, I also wanted to see what would happen if I let those spices hang out overnight in the syrup. So, I let it cool and sent it to the fridge.

The next day, the flavor was much stronger. I liked it both ways, but I only use a tiny bit of syrup. You can decide how strong or subtle you want your flavor to be. 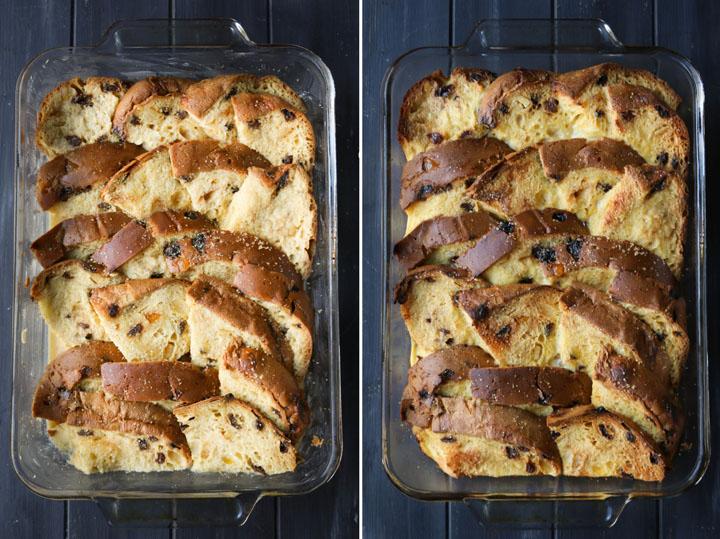 While it largely depends on what recipe I’m making, I generally like to let chilled things come a little closer to room temp before baking. So, I like to take the French toast out of the fridge a good 30 minutes before baking. If I had an hour, that would be fine as well.

I just don’t like putting a super cold baking pan right into a hot oven.

Trust me. Thirty minutes goes fast. Just take it out when you get up in the morning. It will give you time to preheat the oven, make some coffee or tea, get some bacon or sausage or a fruit salad prepared or any of the other items you want to add to your festive meal. 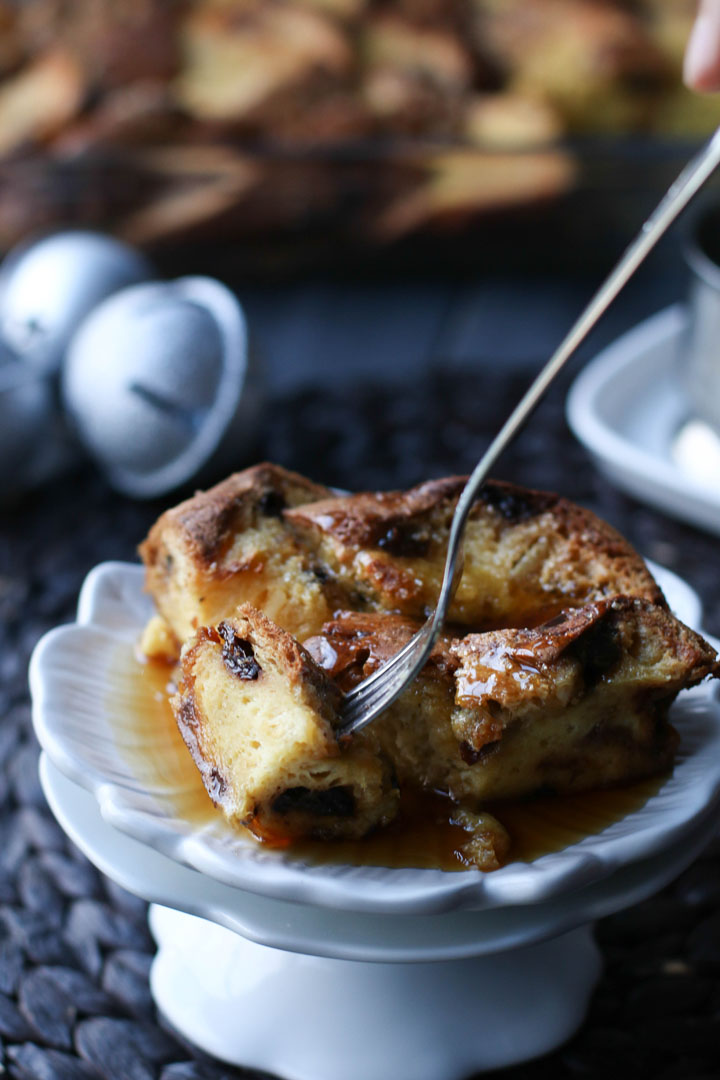 You can also take that time to make the syrup if you didn’t choose to do that the night before.

If you love panettone, I think you’ll love this Overnight Panettone French Toast. The sweetness and the addition of fruit in the panettone give you such a head start on flavor!

And the syrup? That orange flavor really, really ups the ante on the candied oranges in the bread.

In retrospect, I might even have added some chocolate chips to take advantage of the whole chocolate orange flavor combo. I might try that next time. 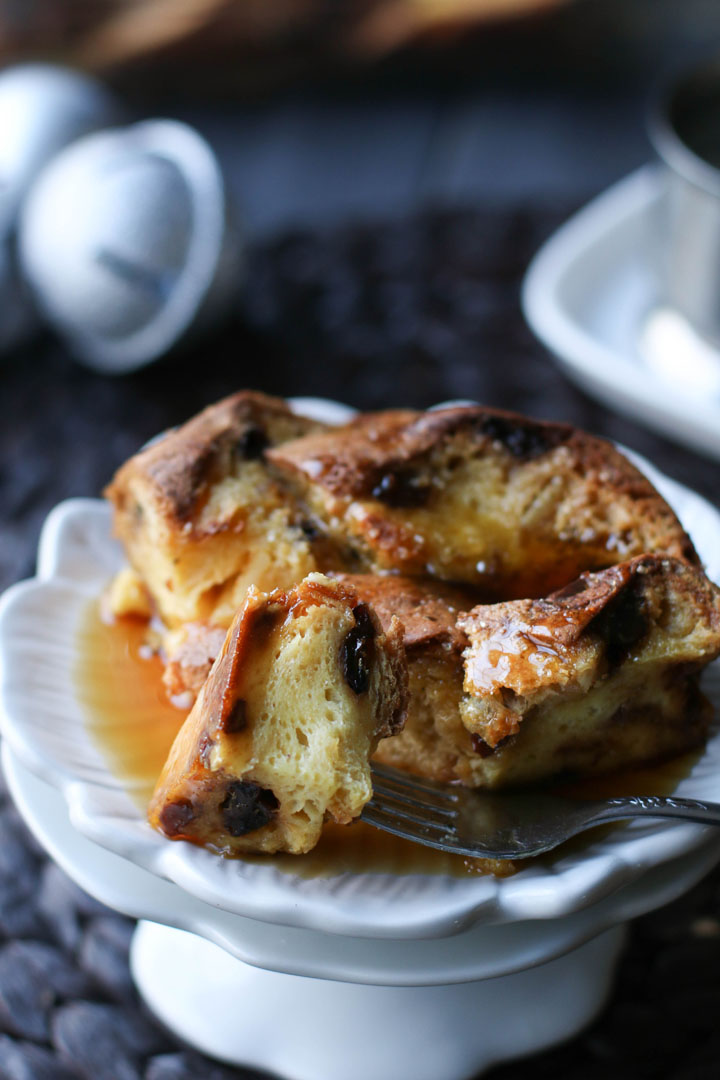 In the end, it’s a fancy little breakfast that takes very little effort. That means you get more time to hang with the family. And, even in 2020 when I’ve been hanging with my crew 24/7, I can still appreciate that :)

For the french toast:

For the orange spiced maple syrup:

*I don't add sugar to the custard mixture because the bread already has some sweetness and it will be baked with sugar on top. Then you can add additional sweetness with the syrup or other toppings. It keeps the whole dish from becoming too sweet and allows individuals to add extra based on their own tastes.

*The sprinkle of raw sugar can be omitted, but I like the crunch it adds to the top.

*Don't press bread too hard or you'll compress it too much. The bread is soft and once wet from the custard it will smash rather flat if you place too much pressure. You only want to insure that the full slice has soaked up the custard. Focus on the edges poking up when you're pouring and you should be fine.

*We didn't need a ton of maple syrup for this dish, so I only used 1/2 cup in the recipe. Unlike the drenching I gave to the piece in the photo, we really just drizzled a little on our slices. If you're a heavy syrup user, feel free to double or triple the amount of syrup. I think the amount of spices will still be fine, but you can add a little more orange or spice, if desired.

*If you use the syrup right away, it will have a the essence of orange and spice (also depends on how strong/fresh your dried spices are.) If you let the syrup infuse overnight, the flavors will be much more pronounced.