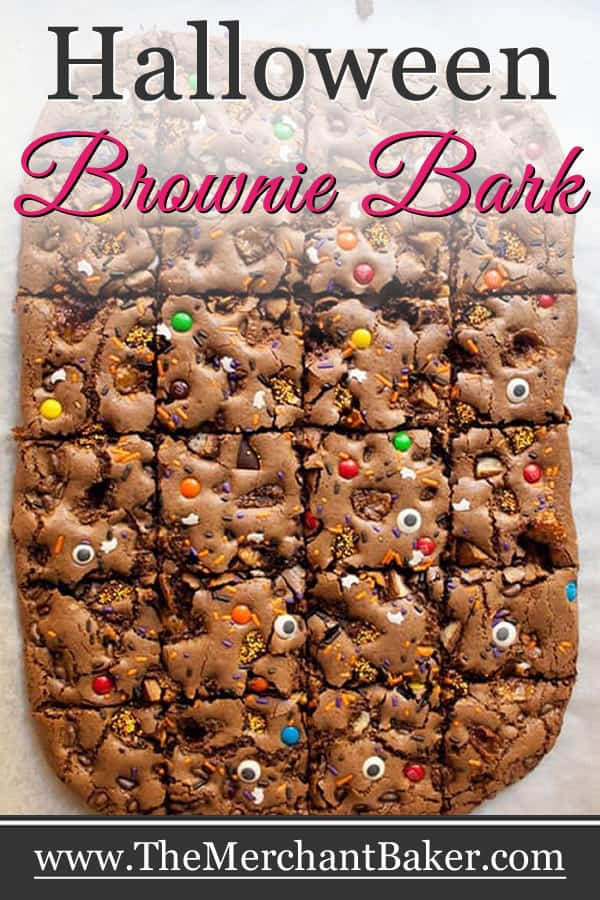 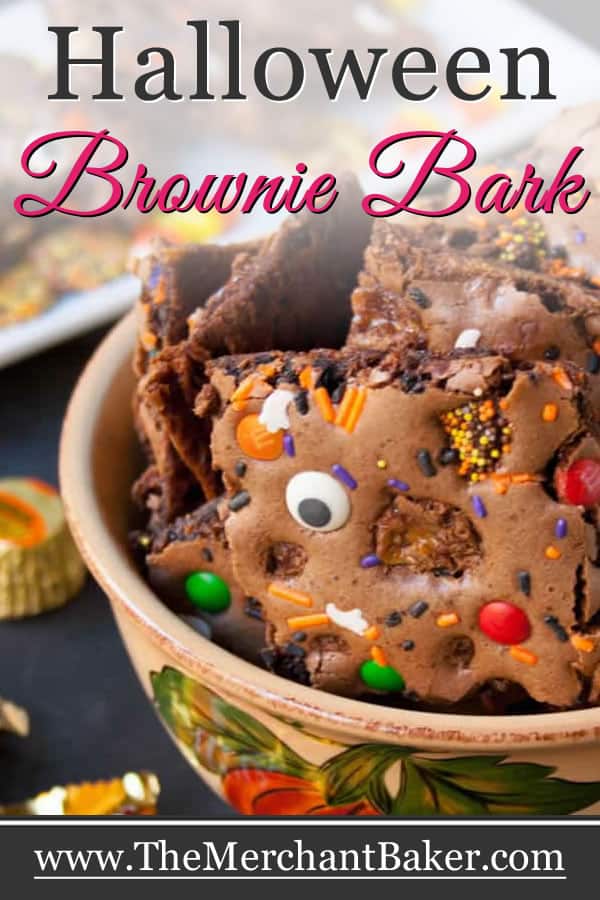 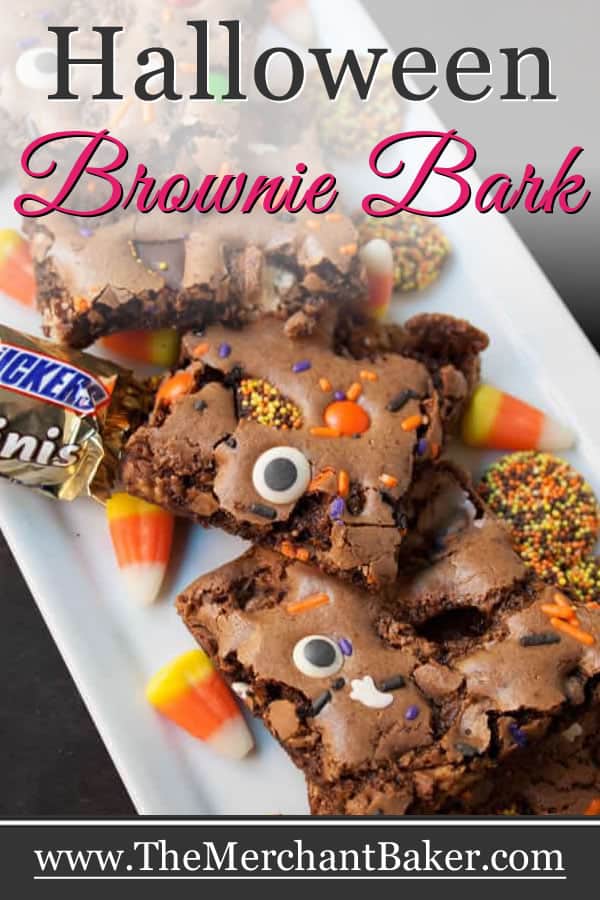 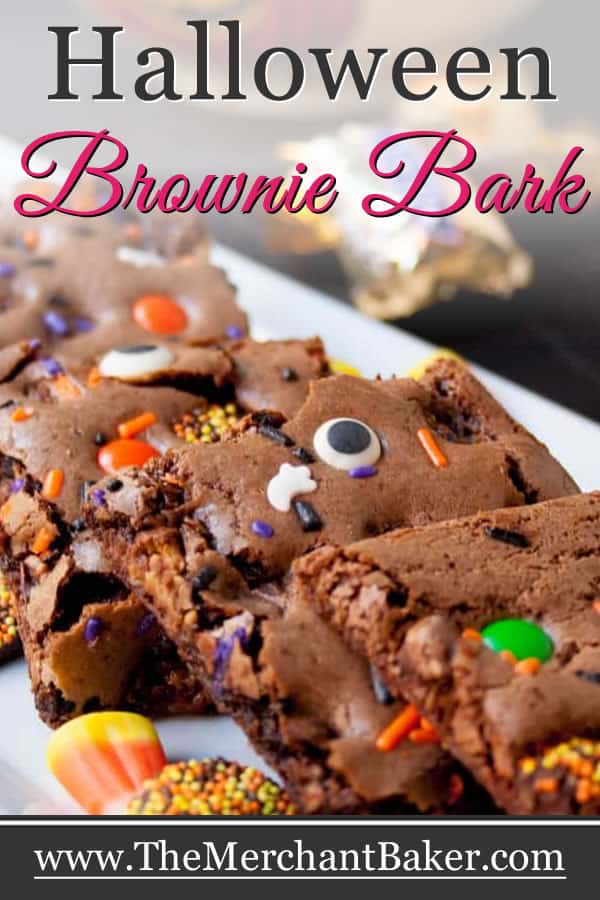 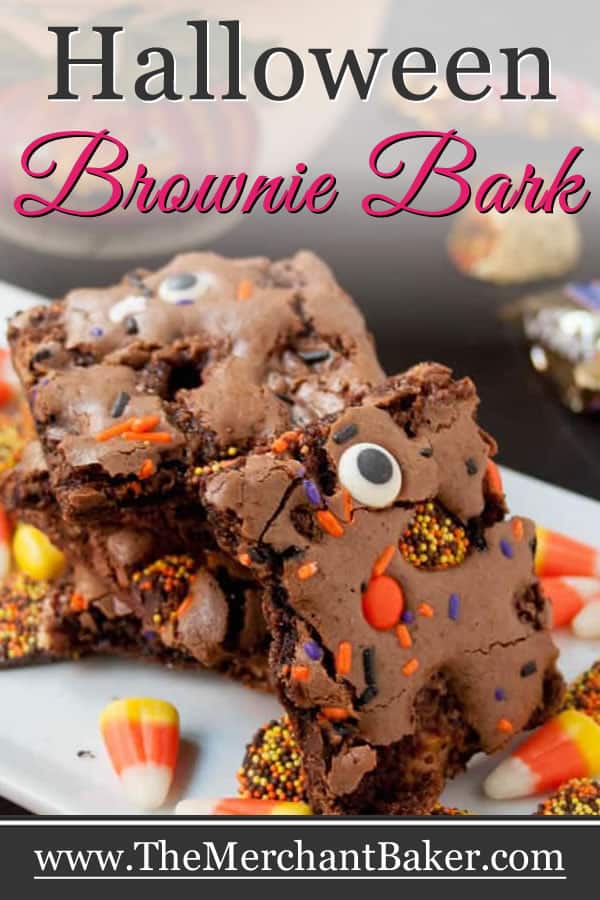 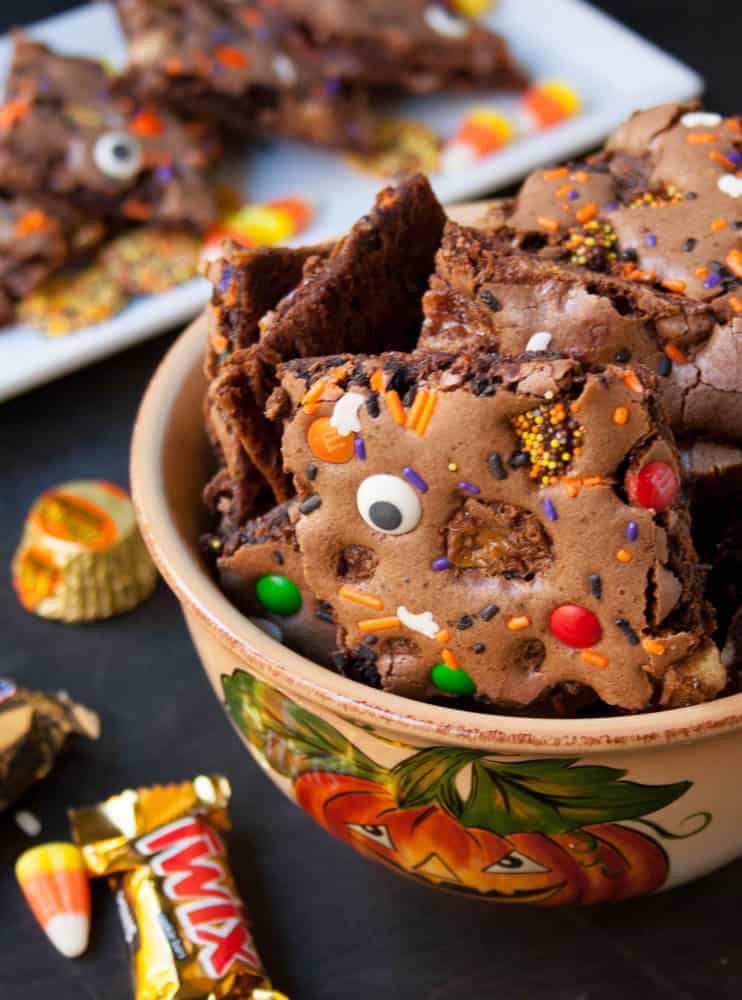 Yikes! I knew it was Saturday…but somehow, last Friday, I was thinking I still had two weeks. Yep, in my head, I was thinking I had two weeks to finish costumes, bake our traditional Halloween cookies, carve pumpkins, get ready for the week’s festivities and blog about the holiday…not to mention all the rest of life’s challenges that need attention. But then I realized that there was only ONE week! That’s why today I’m posting Halloween Brownie Bark, instead of the savory recipe I was planning on posting. I had been planning for weeks to make this bark for you, but I got caught up in a time warp and I realized if I didn’t bake and shoot it stat, I’d completely miss the window. So, I quickly baked and shot a batch, yesterday. 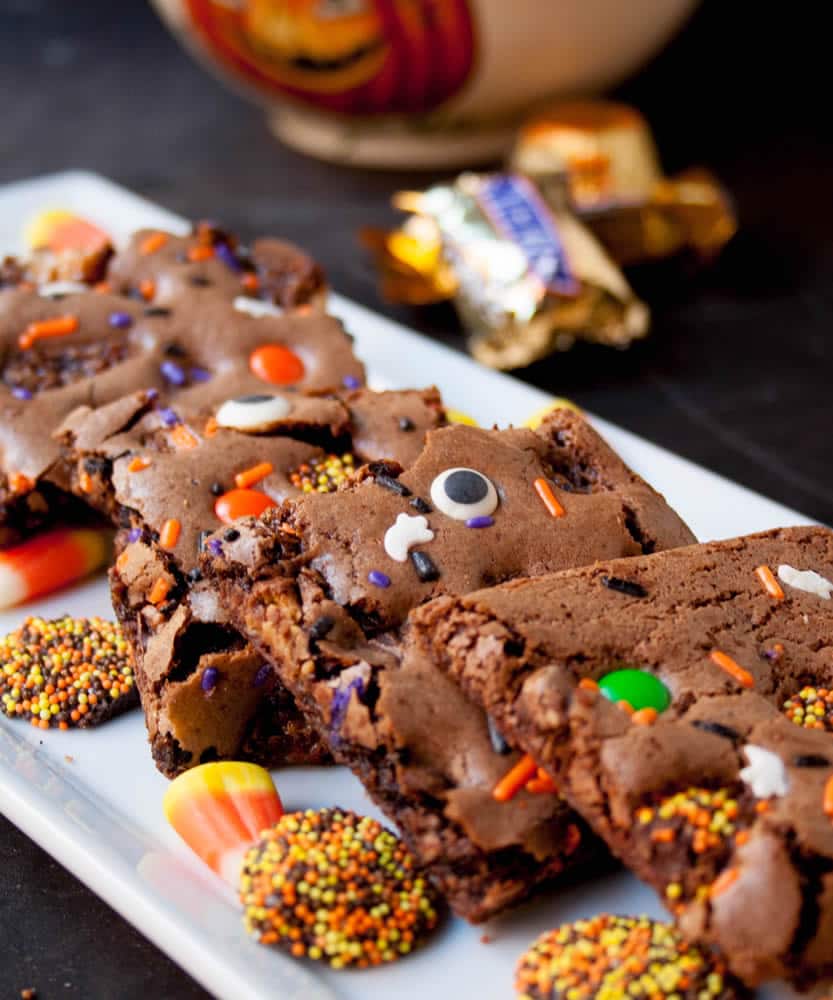 Granted, I’m a little late in posting this, but hey, it’s a quick recipe and you won’t have to shoot it or blog about it, so it’s completely doable…just slide it in between the other 100 things you have on your list ;) Or, make it after Halloween. You’ll have plenty of candy to choose from then, right? 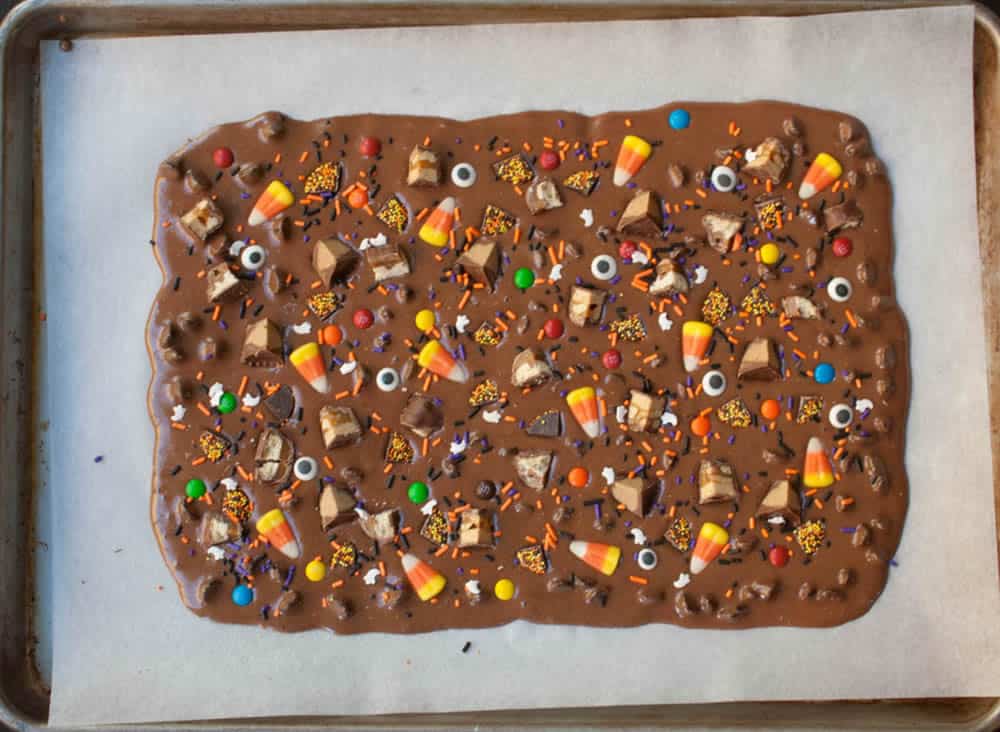 Seriously, it’s worth making and it’s such a fun treat! You might have seen all the Halloween candy bark recipes out there and they’re really cute, but I figured instead of putting candy on top of more candy, which would just leave me with MORE candy… I decided to make a new version of this unique, chocolatey, satisfying bark. It’s basically a thin, super chewy, crispy brownie and it’s more than a little addictive, which is why I’ve made different variations of it. Ahhh yes… a brownie bark for all seasons…. There’s the original Brownie Bark, then Peppermint Brownie Bark, Turtle Brownie Bark and now Halloween Brownie Bark! I won’t go into the details again of how easy this is to make.  Check out the original post (also my first post, so forgive the photos) for more on what it is and why we love it. 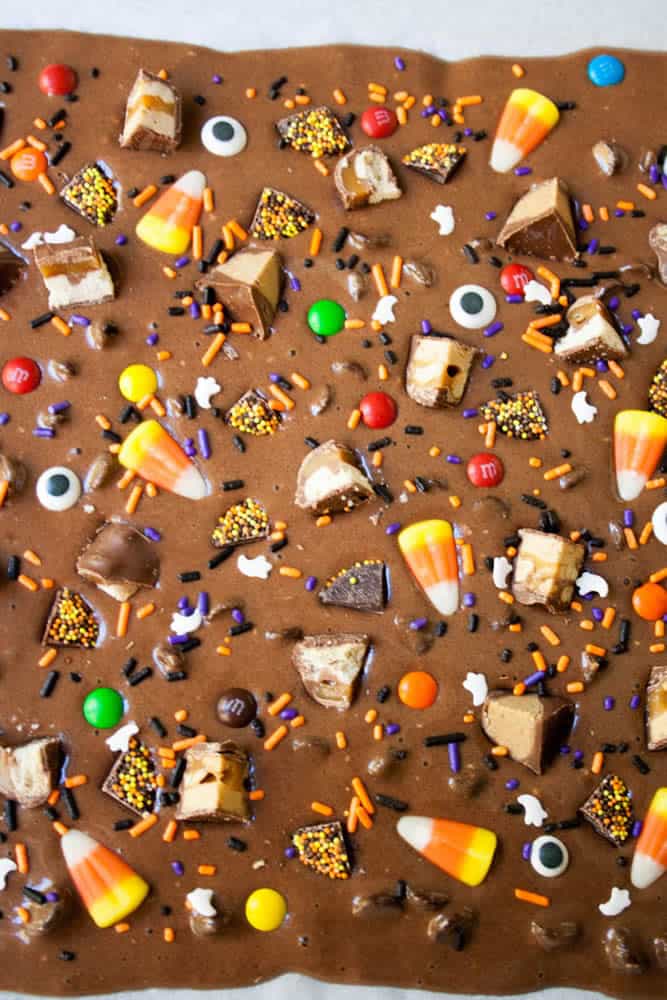 Now I would be lying if I told you this is a good way to use up your Halloween candy. It will use up some, but certainly not enough to make a dent in the mountains of candy that might be hanging around your house this holiday. There’s just too much candy! My kids already know up front that when all is said and done, they’ll get to make up a small bag of their favorites and the rest of the haul gets donated. 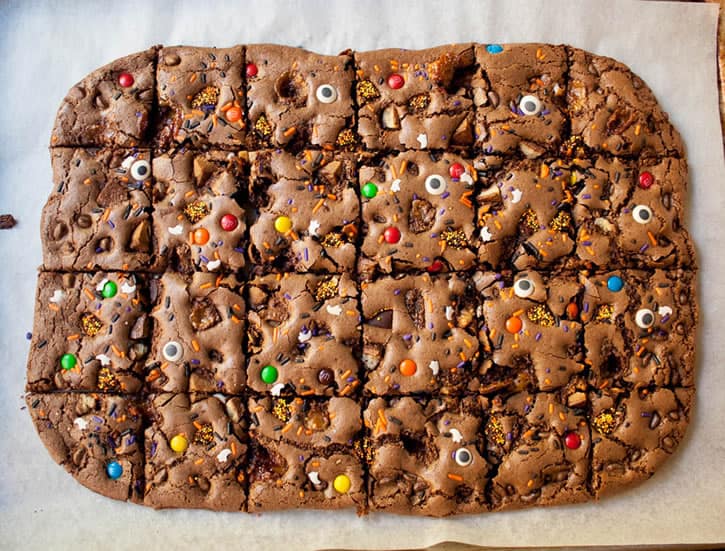 For this recipe, I used Twix, Snickers, mini M and M’s, Reese’s Peanut Butter Cups, chocolate non-pareils, candy corn and sprinkles…and candy eyes :) The candy corn was just for fun. My son is nuts for it; I’m not a fan of candy corn and never bake with it, which is why I didn’t realize that it would completely disappear. But it’s Halloween, so I suppose the fact that it disappeared is kind of fitting. (Oooohhh, spoooky bark!) Anyway, learn from my lesson and don’t use it, or use it, and watch it melt into nothingness.

You can customize this bark anyway you choose.  Just pick candy that works with chocolate and that you’ll be happy to bite into when you come across it.  (I happen to know from experience that the bite with the peanut butter cup and the snickers were particularly yummy :) 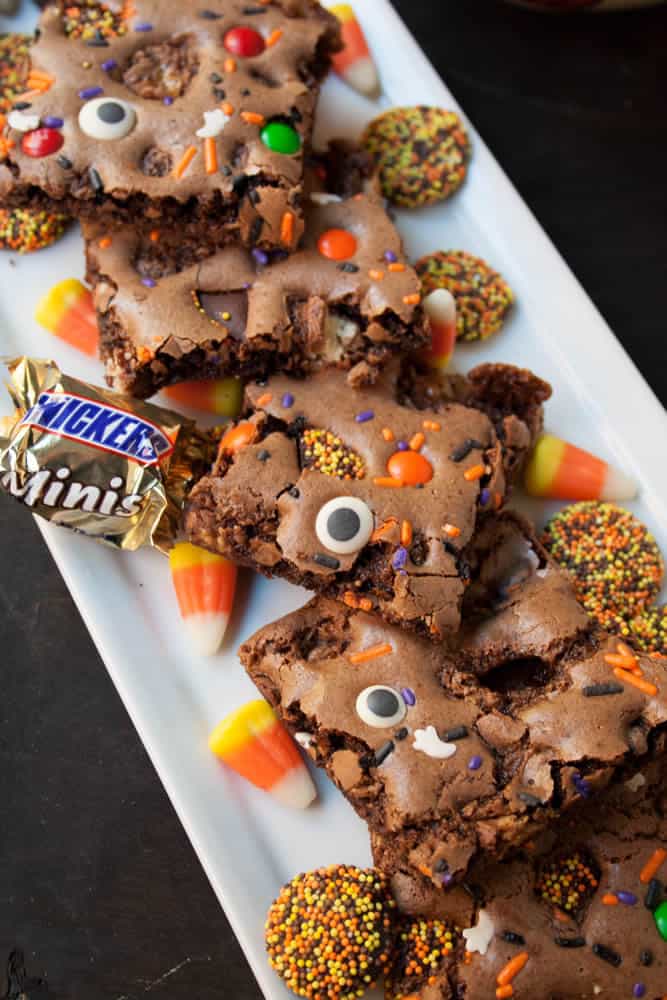 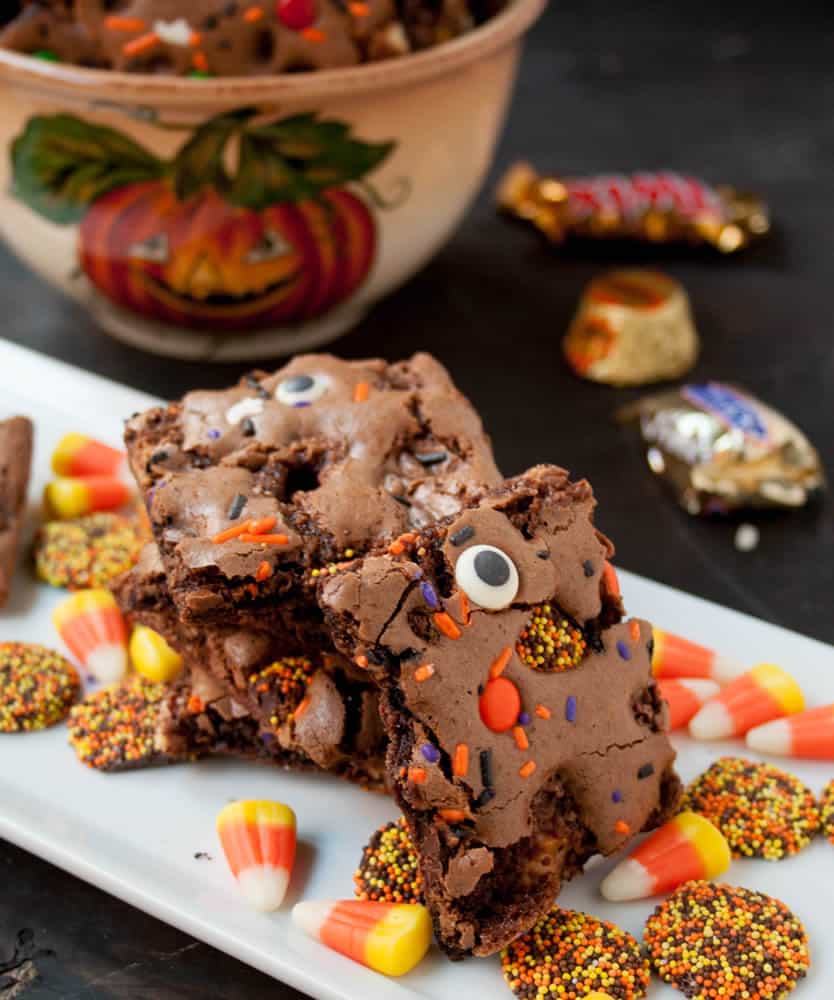 Yeah…I’d better get on that :)

*When you spread the batter on the pan, the chocolate chips in the batter not end up evenly distributed. Don't try to make them even, use the candy you're sprinkling on top to fill in any of the spaces.

*I give you a measurement for the candy; it's approximate. I basically just chopped up candy and kept adding it to the top until I had a good distribution of the different toppings. (I used Twix, Reese's Peanut Butter Cups, Snickers, mini M and M's, chocolate non-pareils, candy corn, sprinkles and candy eyes.)

This looks like a great recipe! Delicious and fun to eat...can't go wrong with that with kids! :o)

Thanks, Jessie! Just a new and fun version of the brownie bark we love to munch!