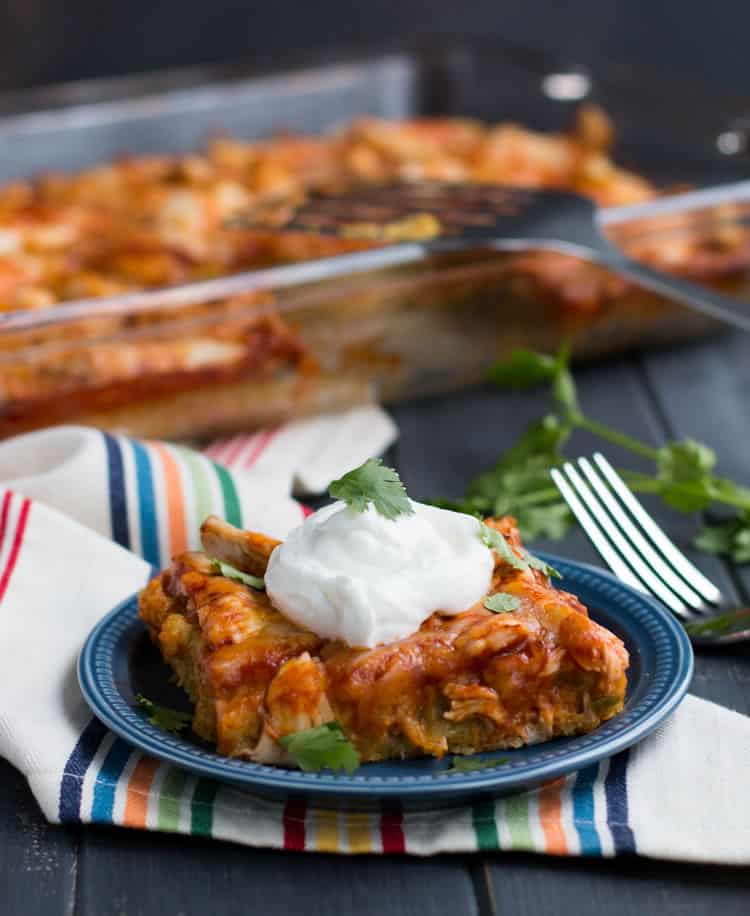 Cinco de Mayo is just days away. So, I wanted to get this recipe for Easy Chicken Tamale Casserole to you stat, just in case you’re still looking for some ideas.

If you haven’t checked it out yet, I also have a list of 15 Recipes to Make for Cinco de Mayo. That’s got a bunch of faves that should not be missed.

Okay. Tamales. I love a good tamale. Some are better than others. Some are more authentic than others. And no, I’ve never actually tried making an authentic tamale myself. Aaaaaand, I’m not going to take on that challenge today.

Instead, let’s just say we’re going to be inspired by tamales when we make this quick and easy casserole.

The truth is, like most of you, I need a boatload of easy weeknight recipes. The larger the group of recipes I have, the longer it is before a dish shows back up in my dinner rotation. That keeps us from getting tired of any one dish.

I try to mix up the flavor profiles so that we’re not eating any one type of cuisine multiple times in one week. I might go Greek one night and Italian the next. I like to balance vegetarian meals with carnivorous meals. I try not to do pasta more than once…you get the idea. 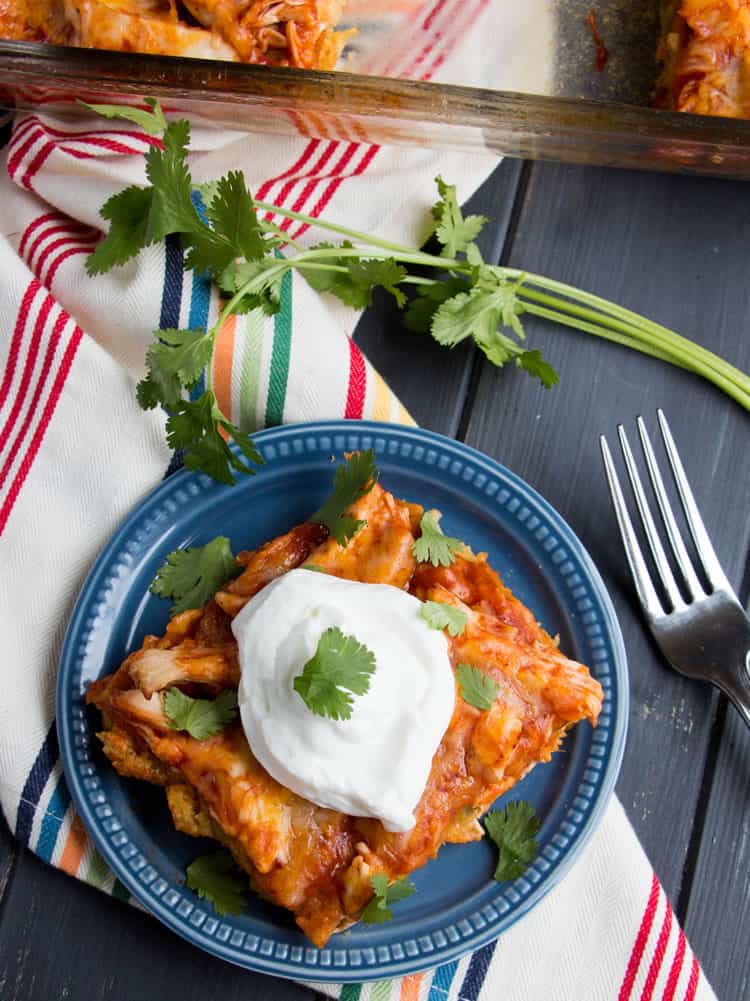 I also try to make a couple of meals that will stretch for two nights. As my kids get older, however, I have noticed that my two meal dinners end up being more like 1 1/2. It’s a problem.

That second meal dinner is a huge bonus that I like to rely on, especially for a busy night. It’s getting harder and harder to accomplish, however, because I’m dealing with growing appetites.

One of my fixes is to make extra side dishes. More steamed veggies, more salads. Anything to bulk up the meal, but with healthy choices.

I mention this because this particular recipe serves 8. Or, it used to serve 8 until growing appetites in my family turned it into more like 6-ish.

When my kids were little, it probably served 10. Times are always changing. Gotta keep up. 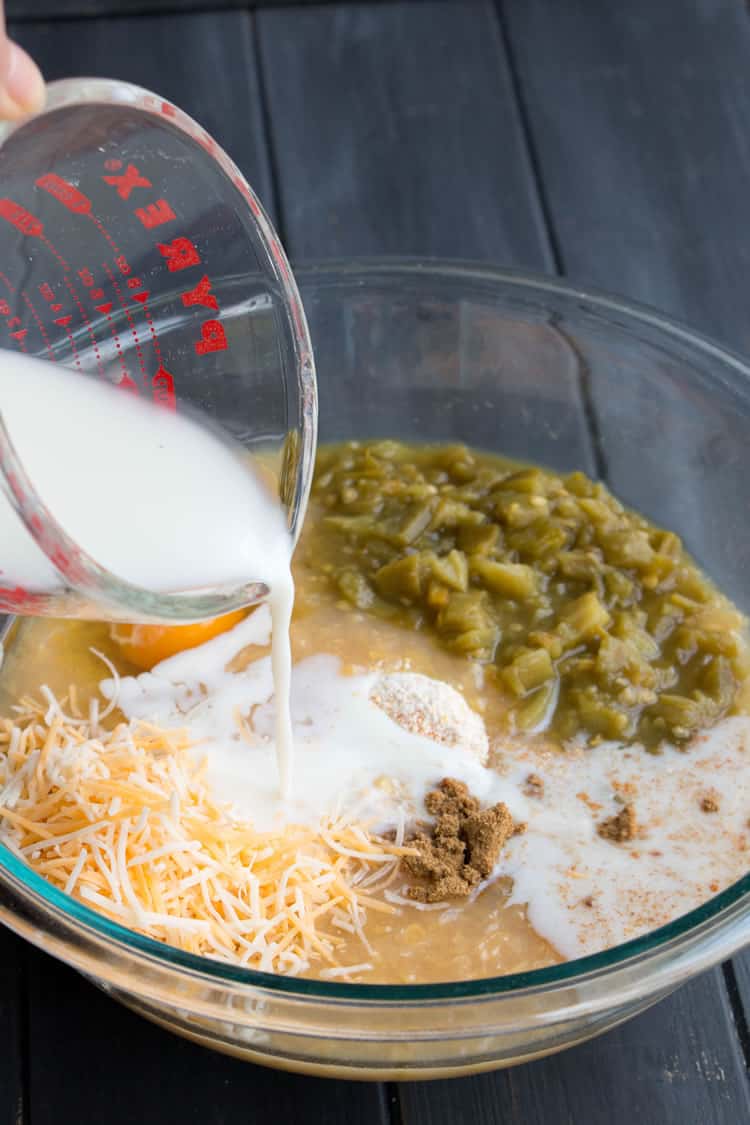 Back to the recipe. It is capital “E” Easy. That’s because it’s loaded with shortcuts. Normally, I don’t take this many shortcuts, but, hey, it works. And you can use all of the short cuts or use less. It’s really up to you. I’ll tell you where I ebb and flow on the short cut situation.

Shredded cheese? Okay, you know I hate shredding cheese, but I almost always shred my own because it’s simply better. I can pick exactly the quality of cheese that I want to use so the taste will be there. 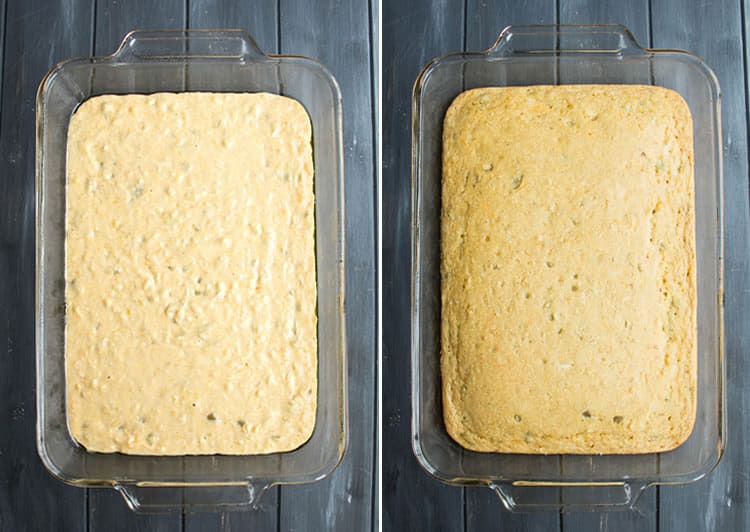 And, as I’ve mentioned it before, pre-shredded cheese is usually coated with cornstarch to keep it from clumping. I think this interferes with the creaminess and melting capabilities.

That being said, I often use pre-shredded Mexican cheese here. One, it’s nice to get five different types of cheese into the recipe. Two, I’m usually making this recipe when I have no time. So, I will use the pre-shredded…forgive myself and move on. (If you shred your own, however, it will be better.)

For the chicken, you can make it yourself or get a rotisserie chicken and shred it up. I usually have my Recipe Ready Roasted Chicken stocked in the freezer just for recipes like this. Whether you use store bought or make your own, having it ready to go is key to this recipe being fast and easy.

Now, for the cornbread mix. Loyal followers know I have my own Fluffy Sweet Cornbread recipe that’s so easy and so quick. It’s fluffy and sweet, just the way I like it. Therefore, I pretty much never use a mix when I’m baking cornbread. 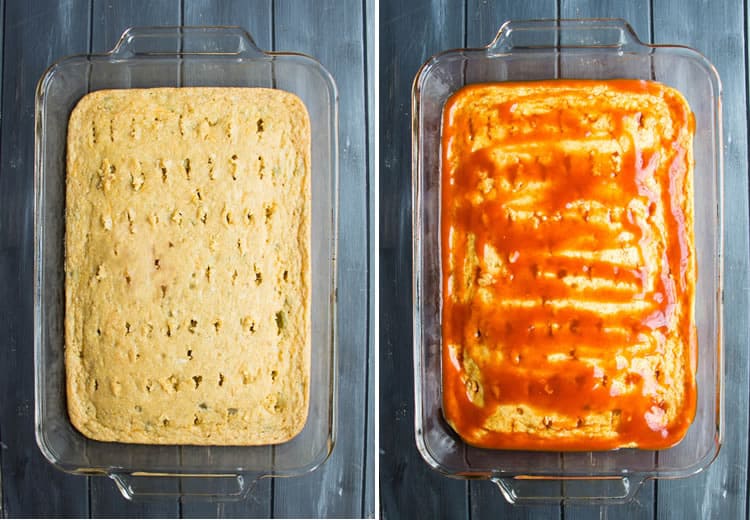 And no, you can’t just reduce the sugar. I tried it once and hated the texture. I have some other adjustments to make before I hit on a more savory version. Plus, I think I want my savory version to have a heartier bite to it. I’ll have to work on that some other day. 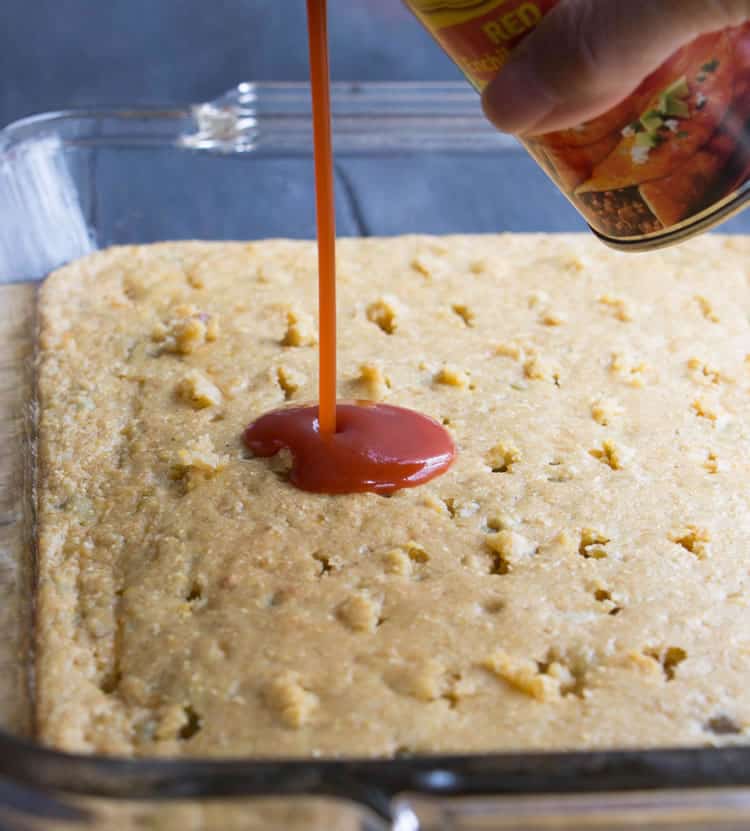 So what’s a girl to do? Keep the shortcuts coming and use a cornbread mix. But which cornbread mix? When I was growing up we used Jiffy.

But, I don’t buy products that have transfats/hydrogenated oils. Which means I don’t buy Jiffy. The mix you buy will be a personal choice. Read the ingredients and decide if you like the list. I like using either Bob’s Red Mill or Arrowhead Mills.

Neither Bob’s nor Arrowhead has fat incorporated into the dry mix ingredient list. That’s why you’ll see olive oil in my recipe. If you use a mix that has no fat in the ingredients, you should add a little back in.

Most other brands have oil or fat in the mix.  If they do, you can skip the oil. Just read the ingredients and you’ll know what to do. (Don’t worry. My recipe notes cover this point.) 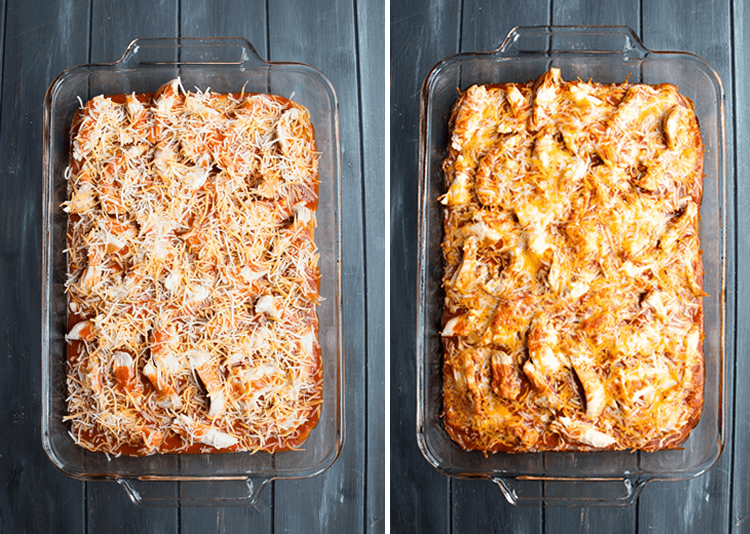 We’ve got our ingredients ready. We’re pretty much using every short cut we can. Here’s how quickly this goes down.

First, you’re going to combine your cornbread mix and all the ingredients that go with it from the cheese to the chilis, using the additional oil only if your mix doesn’t have fat listed in the ingredients list.

It all goes in one bowl. Mix it up just until it’s combined. No need for crazy amounts of stirring.

Pour it into the prepared baking dish and bake for 15 minutes.

In that time the corn bread will bake long enough to set up. Now, this cornbread base is kind of a misnomer. It’s not really a “bread” per se. It’s a little more like corn pudding, if you’ve ever had that.

In other words, it’s super moist. Don’t look for a dry cornbread. This one’s full of all kinds of stuff that keeps it a little creamy.

Once the cornbread base is done, you’re going to pierce the entire top of it with holes, kind of like a poke cake. Just don’t use a wooden spoon handle. You want lots of smaller holes. I use a fork.

Because the cornbread is so moist, your fork might pick up some batter along the way. Just scrape it off back into the pan and continue. 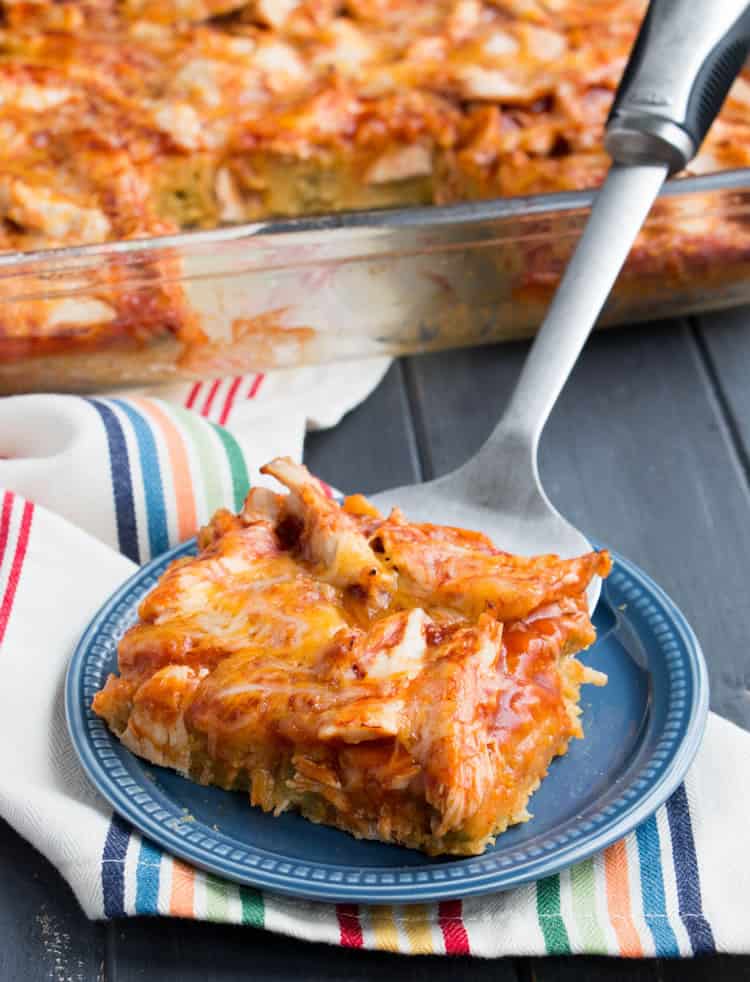 Now, many recipes call for pouring the whole can of sauce over the cornbread base. I like to hold back a little for the top. So, I use a little more than half the can or enough to spread fully over the top.

The rest of the sauce is reserved so that I can top the chicken with it. That extra bit of sauce helps keep the chicken from drying out when the pan goes back into the oven to bake.

Of course, that extra sauce gets topped with the remainder of the cheese, which also helps keep it moist. Trust me though, the sauce is key. It doesn’t take long for the chicken to lose moisture if it’s just propped on top of the dish like it’s sunbathing on the beach. Consider that extra bit of sauce the sunscreen :)

Once you top it with cheese, it goes back into the oven for 15 minutes. And that’s it. You’re done.

Let it cool for 5-10 minutes so that it can set up. You’ll get cleaner cuts that way. 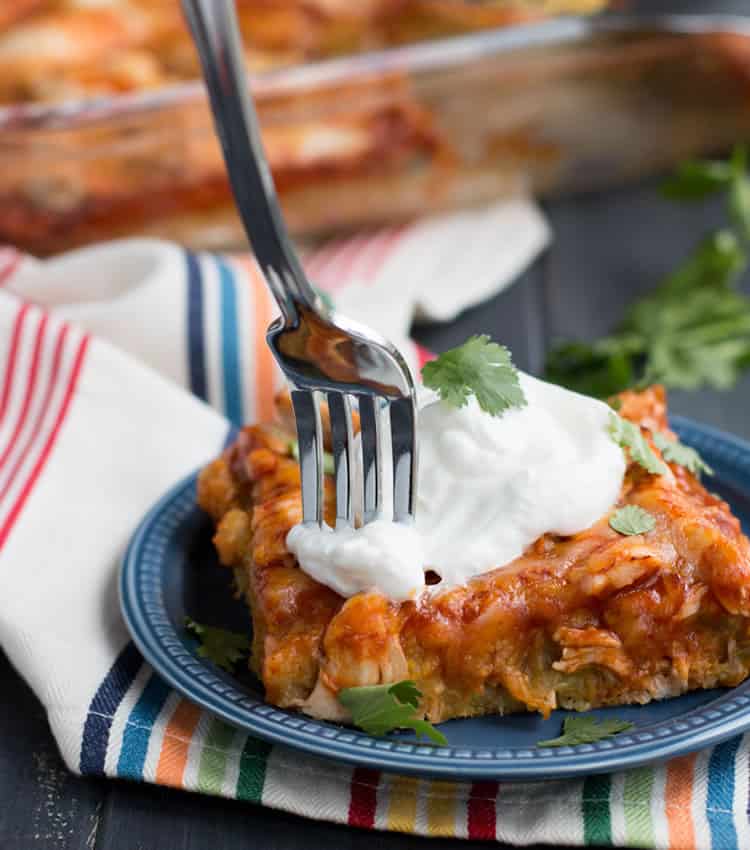 I like to serve it with a dollop of sour cream or plain yogurt and some chopped cilantro. It’s not an authentic tamale, but it can at least live on the same planet, and it can do so tastily.

Now, you know how some foods take a long time to eat and others do not? Like salad…there’s quite a bit of chew time involved.

Well, this Easy Chicken Tamale Casserole does not take a long time to eat. It’s fast to make and even faster to eat.

As I mentioned earlier, it should really be 8 servings, but it “eats” so quickly that you’ll have people coming back for seconds while you’re practically still serving firsts.

So, slow everyone the heck down and make a salad to go with it. Or, a salad and an extra veg. 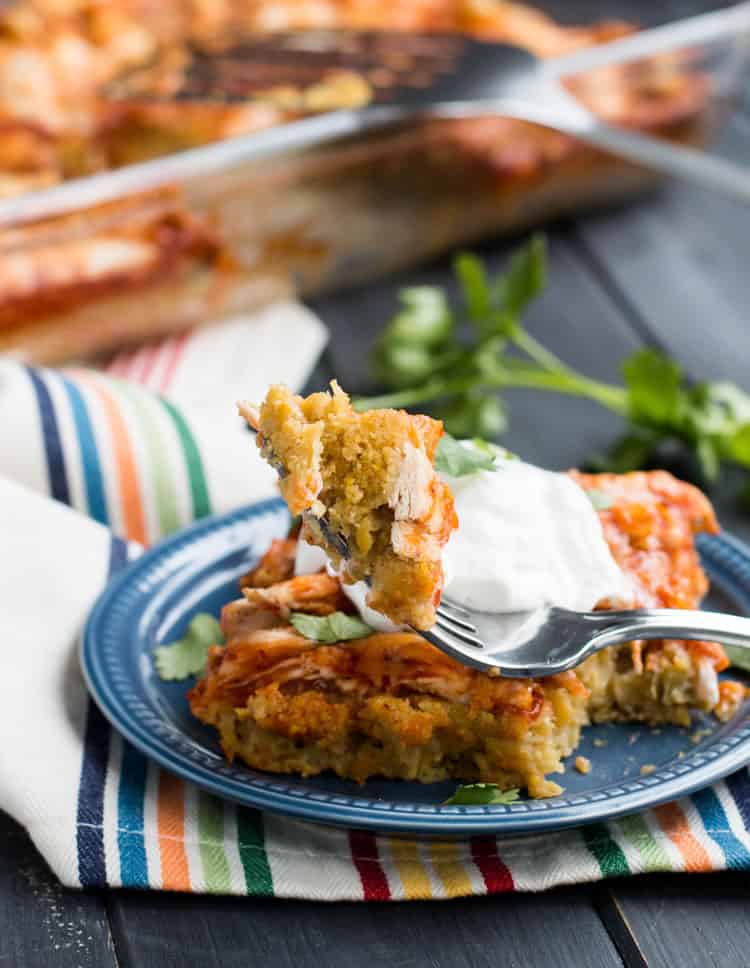 *There are many different cornbread mixes available. If I'm taking this shortcut and not making the cornbread mix from scratch, I pick a mix that has simple ingredients, like Bob's Red Mill or Arrowhead Mills. I avoid mixes that have hydrogenated oils in them. Read the ingredients of your cornbread mix; most of them contain oil already in the mix. If it has oil, hydrogenated or otherwise, follow the recipe as written without the adding the olive oil. If you use a mix like Bob's Red Mill, that doesn't contain oil, add the 2 Tablespoons of oil listed in the recipe.

*The best way to drain the chiles is to remove them from the can. Put them into a strainer and gently press. I've found that simply trying to drain them while they're still in the can (pushing the lid on top of the chiles) doesn't really drain much of the liquid. They don't have to be bone dry, but it's better if they're not wet and dripping.

*This is one of the recipes where I use my Recipe Ready Roasted Chicken.

*Pre-shredded cheese is a nice short cut and I used it in the recipe to keep it fast and easy. If you don't mind shredding your own cheese, grab some Monterey Jack and some cheddar cheese (or pepper jack, if you like the extra spice) and use that. It will taste and melt better.

*If you don't like any bit of heat in the dish, omit the ground cayenne pepper and make sure you buy MILD green chiles and MILD enchilda sauce.

All photos and text by The Merchant Baker