I only make Raspberry Rugelach during the holidays. 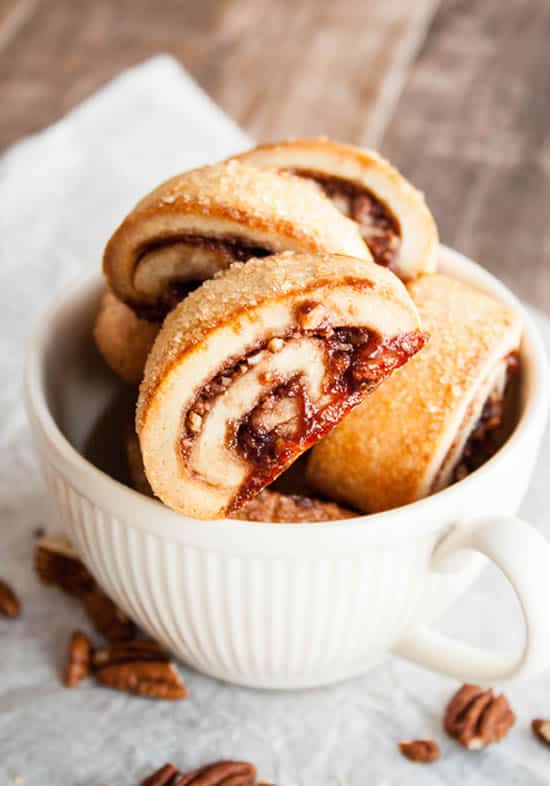 But why?  It’s one of my favorite cookies.  I’ll buy them in bakeries during the year, so why not make them more often?  I made Gingerbread Pancakes last week because I had leftover Whipped Cream Cream Cheese Frosting and needed something to put it on.  I’ve mentioned in previous posts that Pumpkin Waffles are a year round treat.  Call it rebel baking, but lately I’ve been throwing the traditional baking calendar to the wind and making whatever we want whenever we want it. 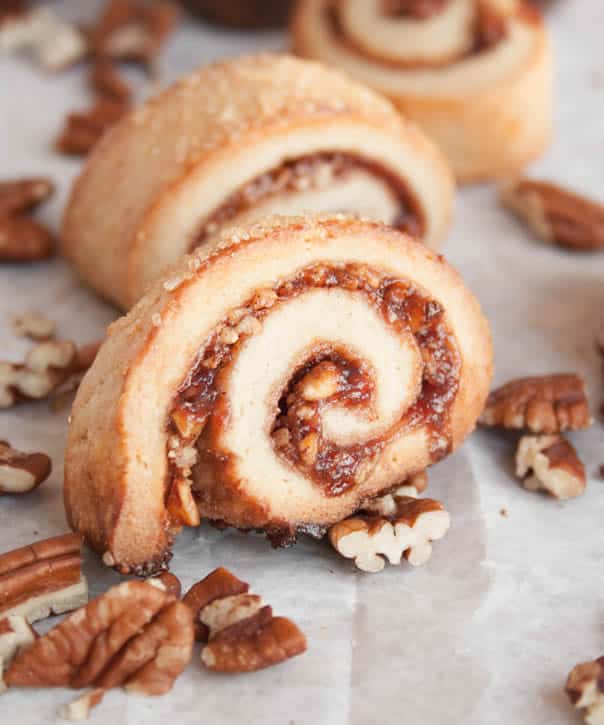 The truth is I was supposed to make these cookies during the holidays.  But, it was my first food blogger Christmas and I got a little overwhelmed trying to do all of my normal baking and still keep the blog going while doing everything else that the holidays (and life) bring.  Now that I’ve been through it once, I’ll have a better plan in place this year. 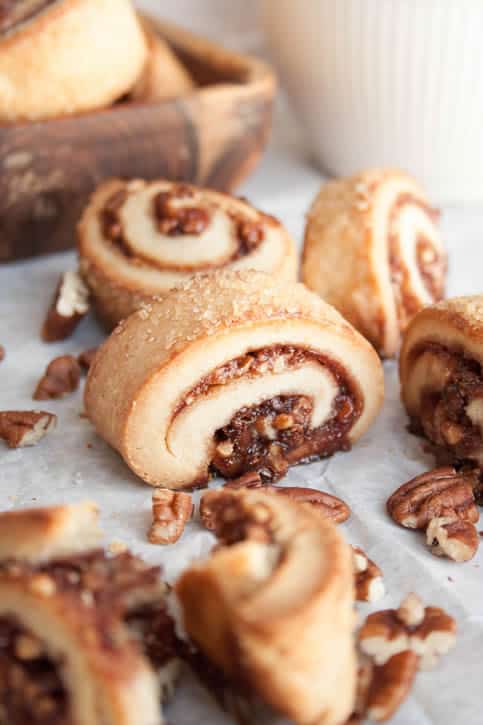 Like cheese blintzes, I hadn’t had rugelach when I was growing up.  It wasn’t until I graduated from college, moved to the east coast and entered the training program of a large retail company that I discovered this delicious cookie.  My first job was as a sales manager in the store line.  I worked in the men’s department and was responsible for dress shirts, ties, socks, robes, pajamas and underwear.  It wasn’t quite the fashion-y retail job I had imagined when I dreamed of some day becoming a buyer, but it was my first step towards that goal. 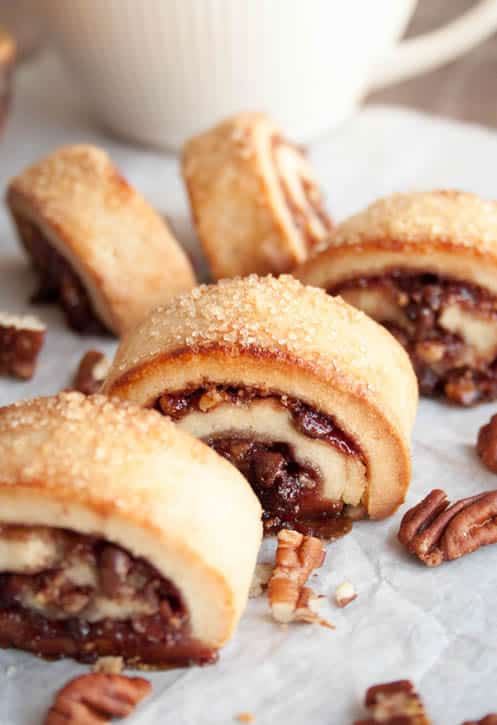 I worked hard and hauled heavy cartons of merchandise (underwear is heavy! :) Some days I felt like a glorified stock boy, but I have to say, I built a lot of strength during that position both physical and business.  I learned how to manage a team of sales and stock people, most of whom were many years older than I.  I also learned how to analyze my business and soon, the buyers were letting me place my own orders, something that wasn’t typical for a sales manager in our store.

I was in the store day and night.  Frequently, we would work “iron” days, which if I remember correctly, was a 12 hour shift. We practically lived there, and for all of us transplants from other states, every one we knew in the world was pretty much at work.  So, we didn’t really mind being there so much, because that’s where everyone else was anyway.

In our store, we had a gourmet marketplace on the lower level.  I used to grab lunch there when I didn’t have time to leave the building.  One day, I spied something in the pastry/cookie case and bought a couple to try.  They were Raspberry Rugelach and they were delicious! They were buttery and tender and a bit flaky, wonderfully rich but not too sweet.  They were heavenly!  They also had chocolate and cinnamon flavors but it didn’t take long for me to decide that the raspberry were my favorite.

If I needed a little treat, I would go down to the marketplace and buy one or two little cookies.  The Raspberry Rugelach became my very favorite splurge.  Later, whenever I would see them in a bakery, I would buy a couple to see if they were as good as the ones from the marketplace.  I don’t know if it’s the passage of time or an idealistic memory, but I swear I’ve never had any as good as the ones that I had back in that store.

At some point, I found some at Whole Foods that I liked and would buy on occasion.  Then, I found the recipe on their website and started making them myself.  They take a bit of time, but are not too difficult to make.  Everything mixes up in one bowl.  Then you just divide the dough, pat each piece into a flat rectangle and refrigerate it for an hour. 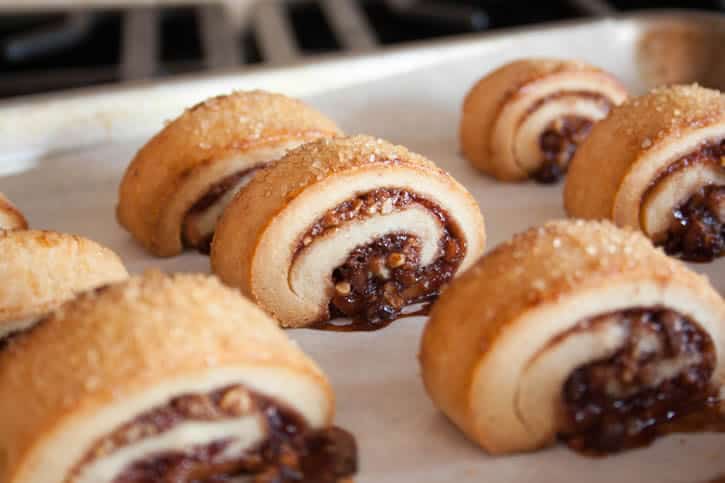 After that, you just roll the dough out a bit, spread the filling on, roll it up like a cinnamon roll then slice and bake.  The cream cheese and butter dough is tender and rich and, of course, the raspberry filling is the perfect partner.  I like to freeze the baked cookies so that whenever the mood strikes, I can take one or two out of the freezer and relax with a cup of tea.  I’m not sure they measure up to the one’s from the marketplace; I don’t think any ever will. 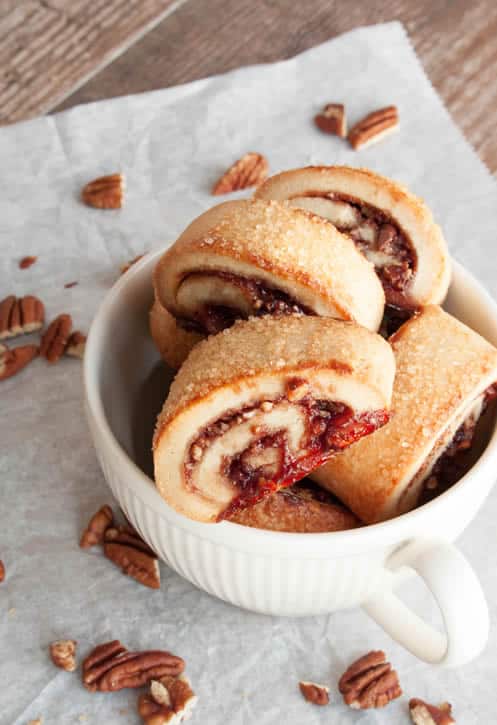 These are made with a whole wheat pastry flour and a lightened cream cheese.  So, they’re a smidgen healthier :) than the ones I used to eat.  Raspberry Rugelach remains one of my favorites and this is my go to recipe to satisfy that craving.  It makes for a delicious cookie and brings back some really great memories of the beginning of my career…except for hauling heavy cartons up a flight of steps to an upstairs stock room. 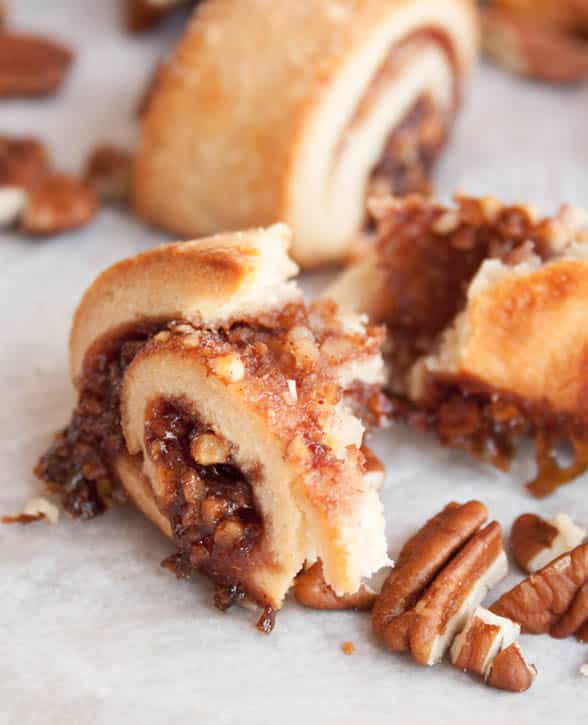 Yeah, I don’t miss that.

*Store cookies in an airtight container at room temperature up to 3 days or freeze in freezer bags for up to 3 months.

*I love these as a sweet addition to a brunch buffet. The sweet fruit and nut filling, combined with the rich dough are reminiscent of a fruity Danish pastry.

*If you roll your dough to about the 8x10 that I mention in the recipe, you should get 30 cookies. I mention that I didn't roll it as thin as I should have so that you'll know that your cookie layers should look thinner than the ones you see pictured.

*I give measurements for filling as a guide. You can add or subtract as you like. This is what works well for me. I like well filled rugelach. Some will seep out during baking, but I don't worry about it.

*Be sure to leave at least one inch at the far side of your roll or you will end up with filling overflowing at the end and that will make for more of a mess during baking.

*I used mini chocolate chips in one of my three rolls. You'll need 1 Tablespoons per roll. Just add them right after the nuts. The picture of the dough with filling on top is the roll that had the chocolate chips.

*Make sure you measure your flour correctly. I accidently put in equal amounts of each flour instead of the 1 1/2 and 1 1/4 cups only because I'm used to splitting these flours equally for other recipes. The cookies were fine, but don't make the mistake. Slow down and read the recipe carefully. An extra quarter cup of flour does not make these cookies better, although they were still delicious and we ate ALL of them :)

OK. So i made these again with all-purpose flour only-2 3/4cups,they came out good. More like the traditional rugelagh. However, after having eaten a lot of the wheat version, I have to say they have really grown on me. The wheat really cuts the sweetness. I used Hodgson Mills wheat pastry flour, just as an FYI. I really appreciate your response. Looking forward to more of your delicious recipes.

Wow! Baking warrior! So, it's kind of funny because the first time I made this recipe, I wasn't sure they were a hit, but everyone else loved them. So I used the same recipe again and, just like you, they really grew on me. The heartiness that the whole wheat pastry flour gives them sort of partners well with the richness. It's like "rustic rugelach." So, I've stuck with this recipe and been quite happy. Thanks so much for reporting back on the flours; it's great information.

So i made these today. Followed the recipe exactly. They were kind of "wheaty"tasting. I did use whole wheat pastry flour. Perhaps some brands of this flour have a more pronounced wheat flavor? Even still, I will not be deterred from eating them all. They rolled up like a dream, had the perfect amount of filling,and looked really pretty. I think maybe next time I would just use all all-purpose flour,or perhaps white pastry flour. Thanks for a great recipe.

Hmmm, they don't taste wheaty at all to us, but we all have different tastes, so it's hard to tell. I don't even tell people that they are whole wheat and they love them, even my picky eater friends. I usually use King Arthur Flour Whole Wheat Pastry Flour or Bob's Red Mill. I never use regular whole wheat flour anymore, because it's too "wheaty." I only use whole wheat pastry flour and I like using it for certain muffins, pancakes and these cookies or whenever I'd like to get more whole grains into a recipe. (Just as an fyi, it did not work out for my buttermilk biscuits. Those will have to stay all purpose.)

I think you'd be happy with all purpose flour for this recipe. I would not use a white pastry flour. I really think it will be too soft for the cookie, but if you try it and love it, let me know. Actually, if you try any other kind of flour and love it, I'd love to know (but try all purpose next :) In any case, I'm glad the cookies will still be consumed!

Buttery, jammy goodness! I love rugelach. Whole Foods does have one of the best bakeries in regards to the super markets on the east coast. :)

I rarely buy things at bakeries because I bake so much myself, but when I do, I know when I look at the ingredient list on a Whole Foods item, it is both short and recognizable.