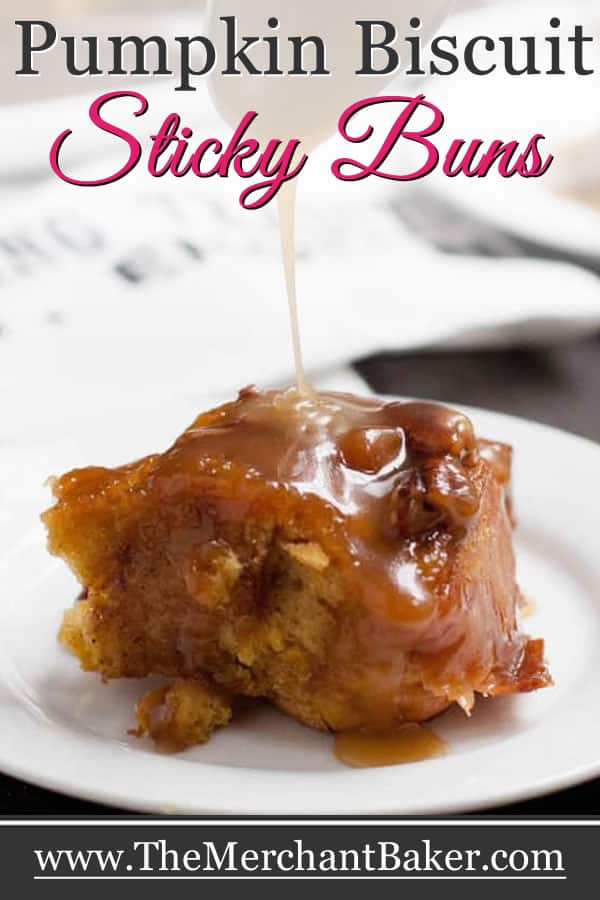 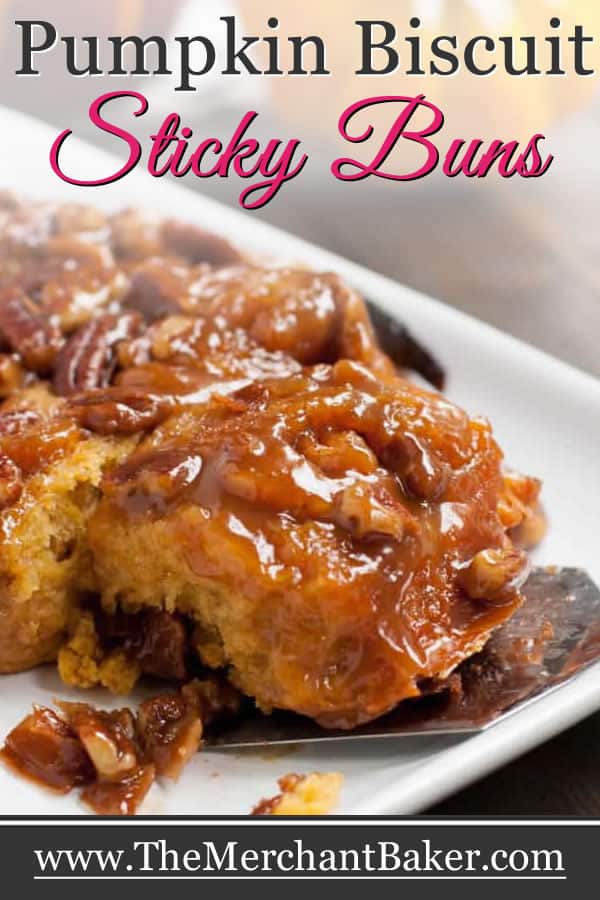 I made these Pumpkin Biscuit Sticky Buns as redemption for a handful of recent apple recipe fails. 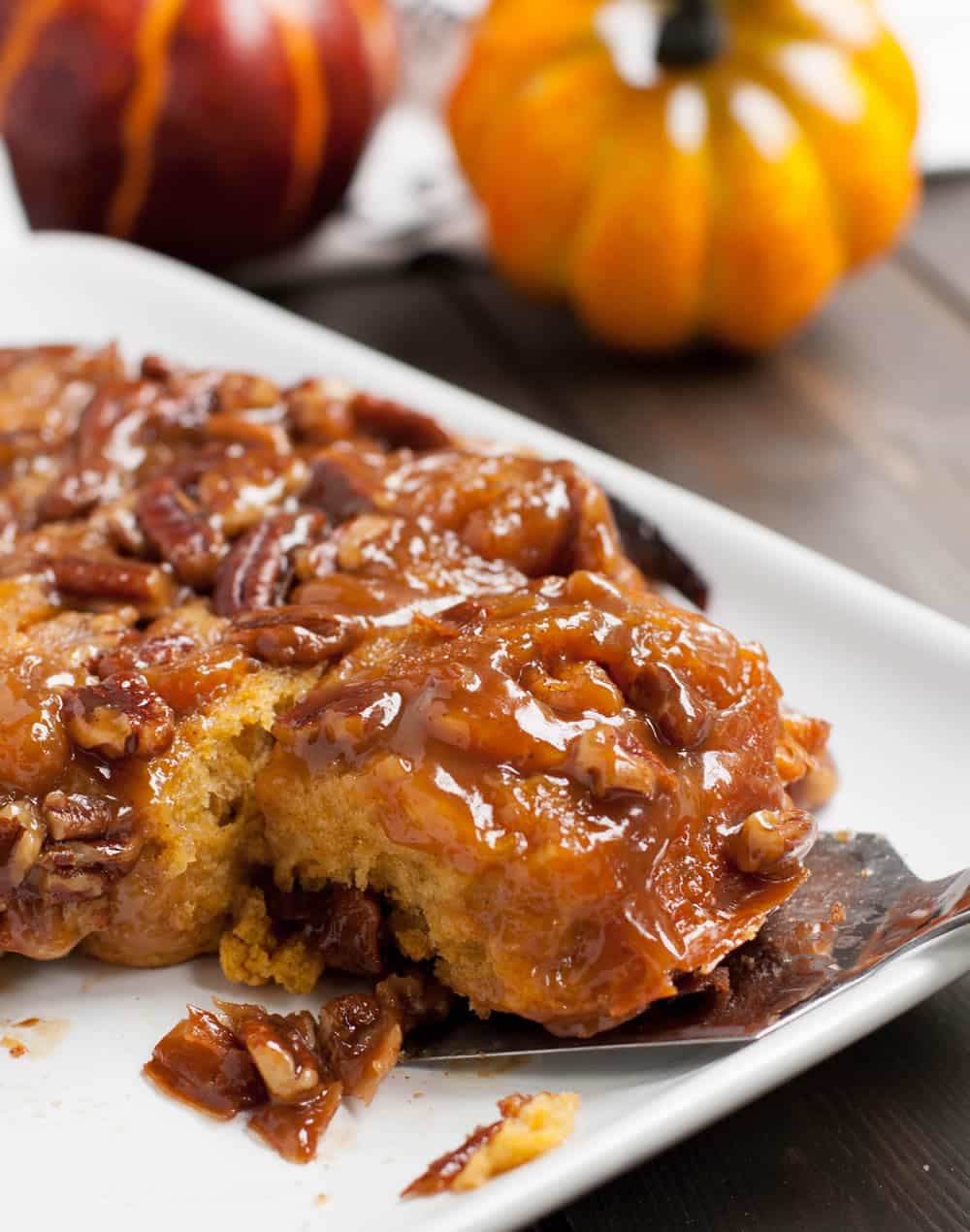 I had planned to share one new and wonderful apple recipe before I started down the road into pumpkin land, but it just wasn’t in the cards. Yep, grand plans. It all sounded so good in my head, but I had a couple of disasters…edible disasters, but disasters none the less.

In one case, I took my gorgeous apple creation out of the pan and even started to shoot it…until I realized that the middle did NOT fully cook and was just a mess of raw dough. Ugh! I looked at it and thought, I am NOT going to waste all of those ingredients! And so, I scooped it all back into the pan and baked it again. I baked it until I was sure the dough was fully cooked. It wasn’t pretty, but it was cooked. I thought, how bad could it be? I mean, everything in there was good stuff, right? 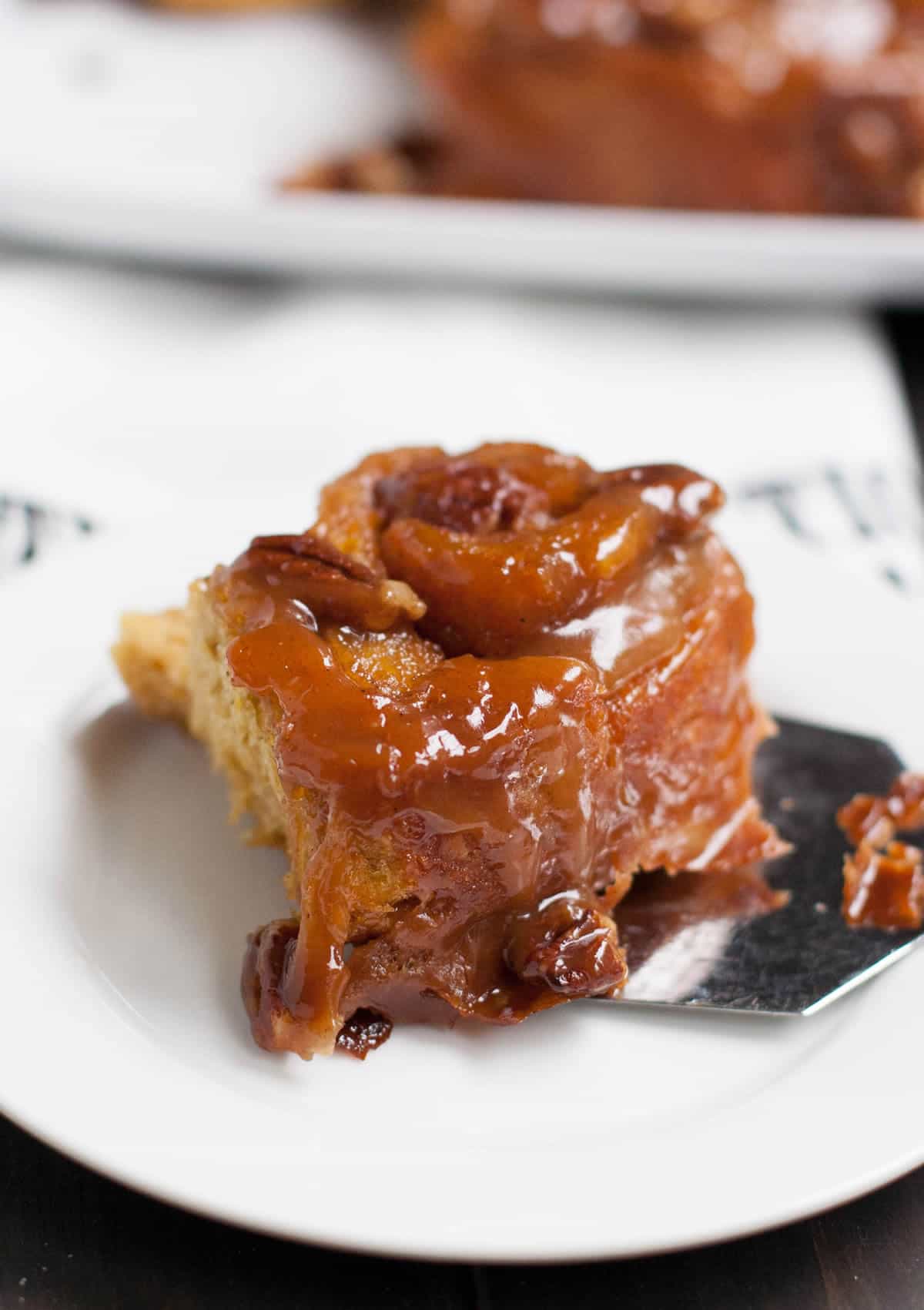 I set it before my family with all of the requisite disclaimers. I said, listen, it’s not pretty, but I think it might taste good. I can’t blog about it, but if you want to try it, have at it. Let me know what you think. Seriously, the oohs and aahs were a little unexpected. They loved it! I tried a piece. Yep, all kinds of apple and cinnamon deliciousness right there. But not a tried and true recipe. I was going to have to figure out a different process or the directions would read, “Scrape the whole mess out of the pan and then back in before you bake it for a second round.” It wasn’t just about baking it longer. The whole thing didn’t work the way I put it together. At that point, I was kind of over it. It was really good, but I really wasn’t in the mood for a do over. 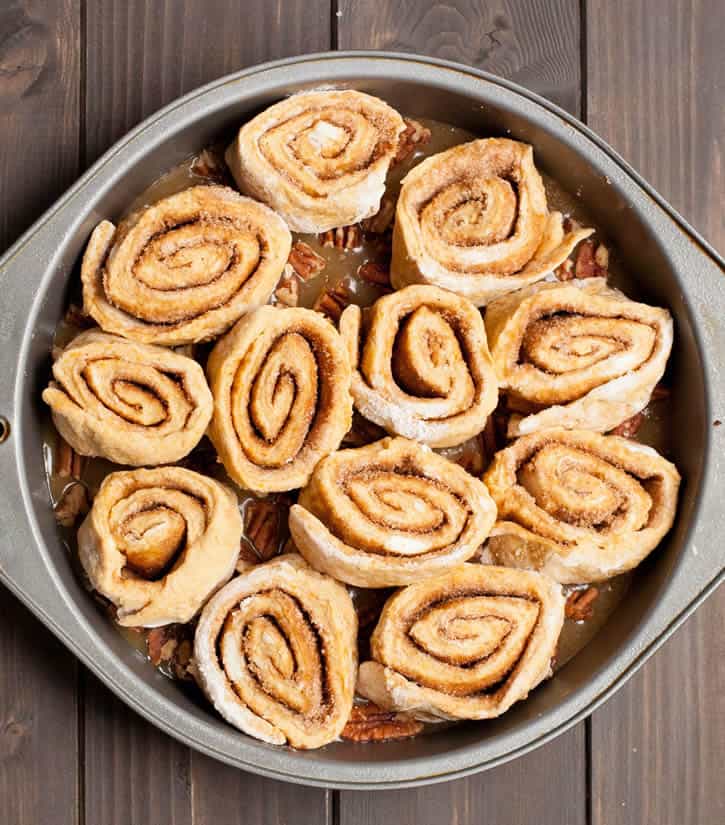 I decided to go down another route. While I was dreaming up the disaster apple recipe, I was also planning this little pumpkin number. Actually, I’ve been planning this one for a long time but I kept moving it as I came up with other ideas I wanted to try. I had a bit more confidence with this one, but that was certainly no guarantee that it would turn out.

I started with my Pumpkin Buttermilk Biscuit Recipe. You know I love biscuits and scones and scones and biscuits forever and ever and ever. I was so excited when that biscuit recipe was a winner. Oh, it’s such a good variation of a delicious buttermilk biscuit! It’s got pumpkin and spice in the dough along with some orange zest. If you like a hit of orange and spice with your pumpkin, you’ve come to the right place or… er…post. 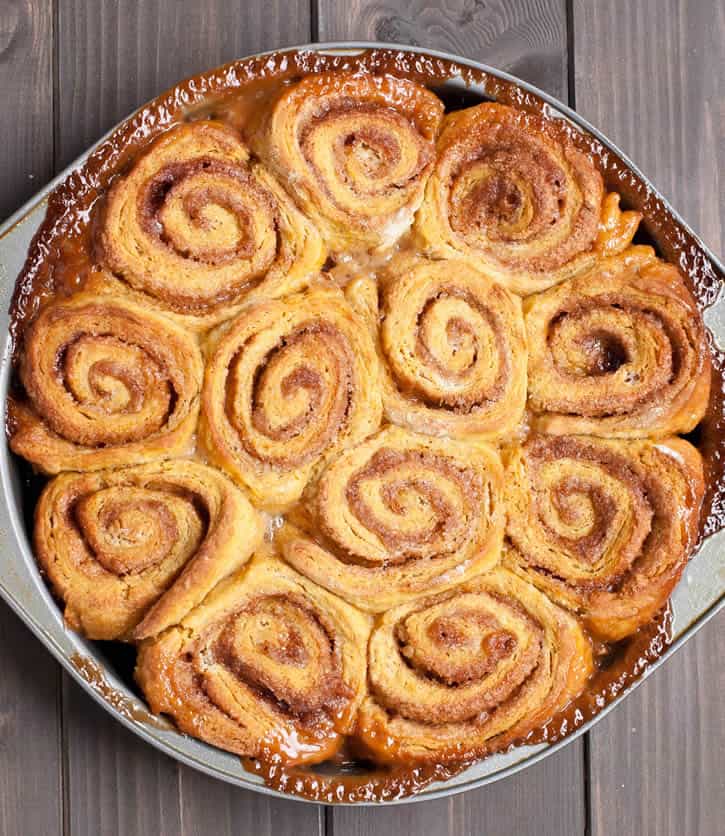 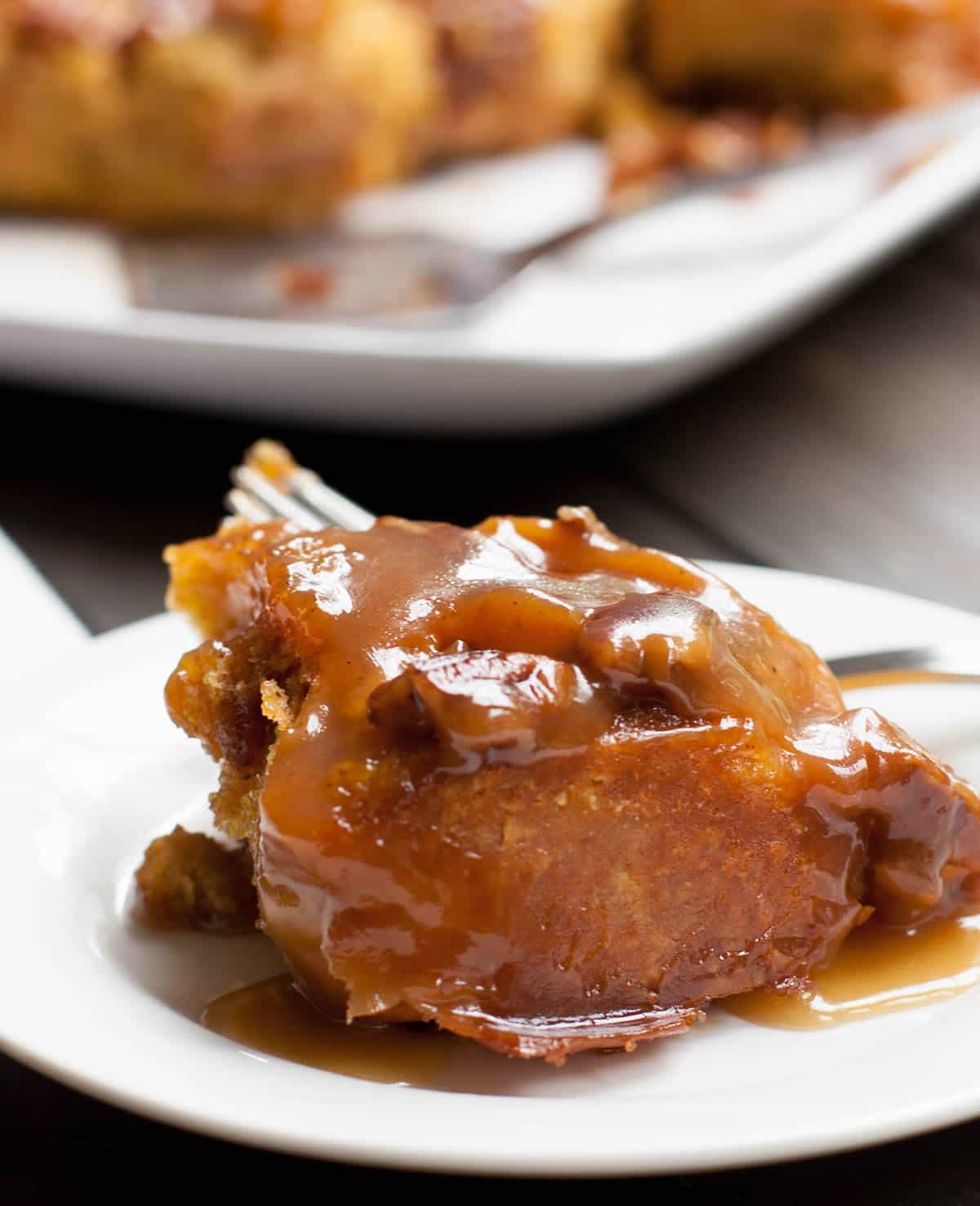 Instead of just making the pumpkin version of the cinnamon rolls, I made Pumpkin Biscuit Sticky Buns!!!! That’s right. Pumpkin Biscuit Sticky Buns. You get that pumpkiny, spicy, dough all rolled up with brown sugar and pumpkin spice. Aaaaannnd, you get buttery, maple-y, pecan filled syrup dripping all over the whole darn thing. I know. I mean, have you ever even had a pumpkin spiced biscuit sticky bun??? I haven’t. It’s a whole other genre of cinnamon roll. Sooo good! If you’ve read my post about Fluffy Buttermilk Biscuits, you’ll see how easy it is to make biscuits from scratch at home. For this recipe, all you have to do is make a batch of the pumpkin version. 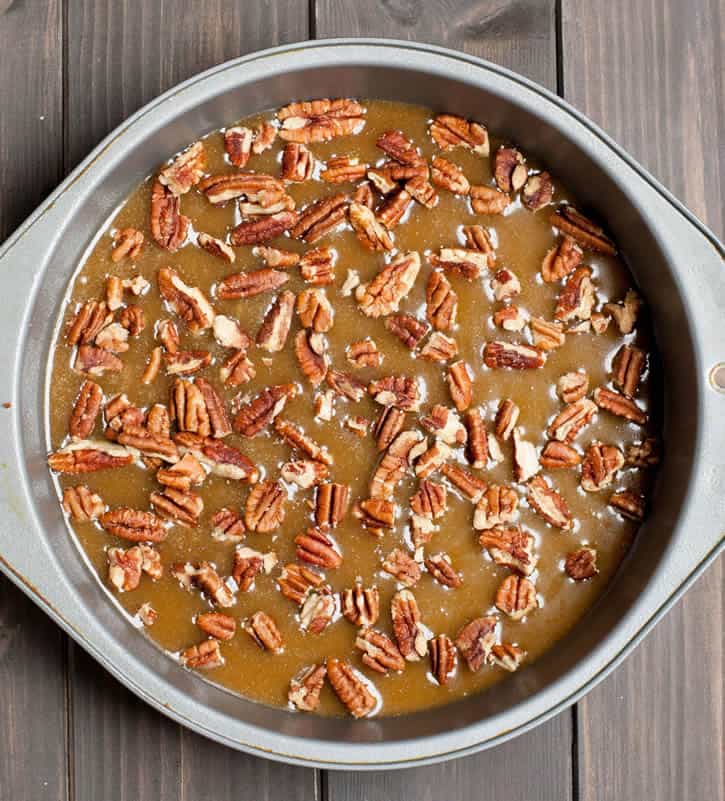 But first, make the gooey syrup for the bottom of the pan. Toss in a bunch of pecans. I give you a measurement, but use what you want. 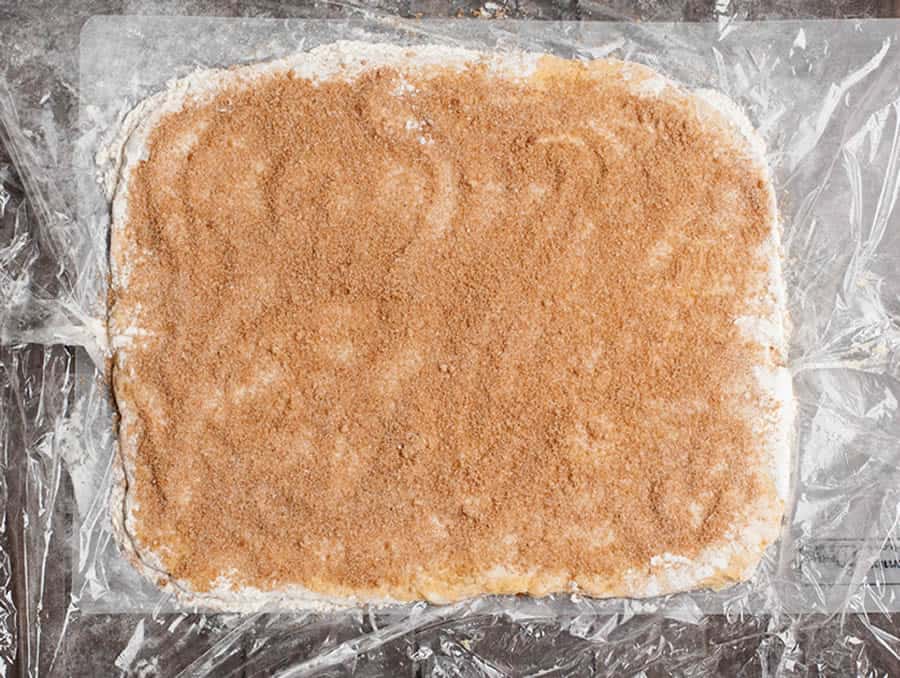 The dough is easy to roll out and it doesn’t have to be perfect. Once you get it rolled out to rectangle, you’re going to spread some melted butter all over it. Sprinkle with brown sugar, white sugar and pumpkin pie spice. Roll it up, working from one end to the other so that it’s a tight roll, not tight like you need to stretch it, but take your time working from one end to the other so you don’t end up with a sloppy roll up. 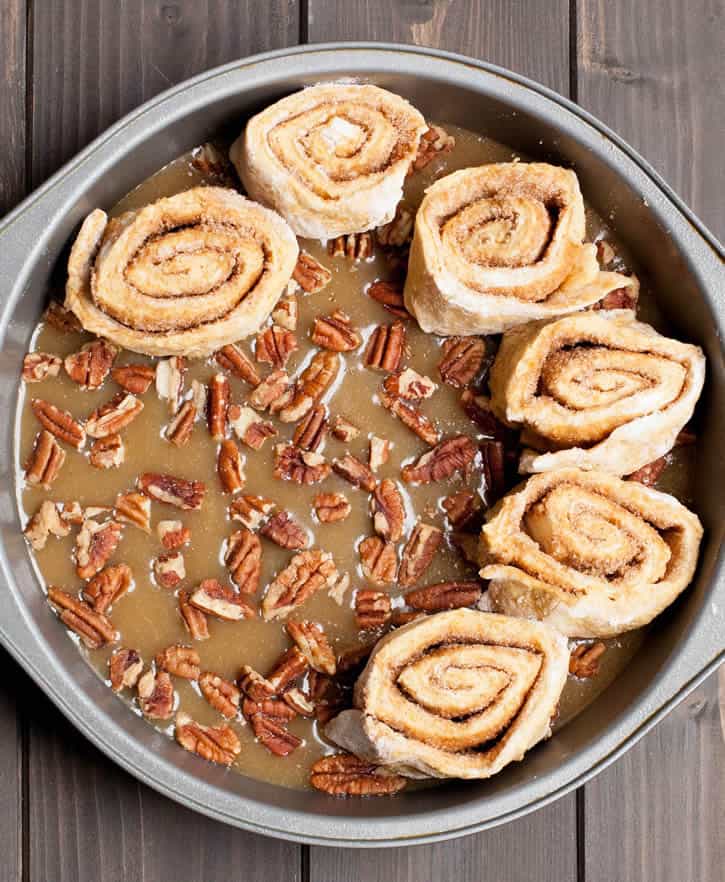 Cut the dough into about 1 to 1 1/4″ slices and put them in the pan. It’s okay if your ends are a little loose. Just wrap them back around and fit all of the slices nicely into the pan. You can even see that some of my rolls are looser than the others. It’s all good. I learned this lesson with my Buttermilk Biscuit Cinnamon Rolls. I thought they looked a little wimpy in the pan, but boy, magic just happens in the oven and you’ll be shocked when they come out! 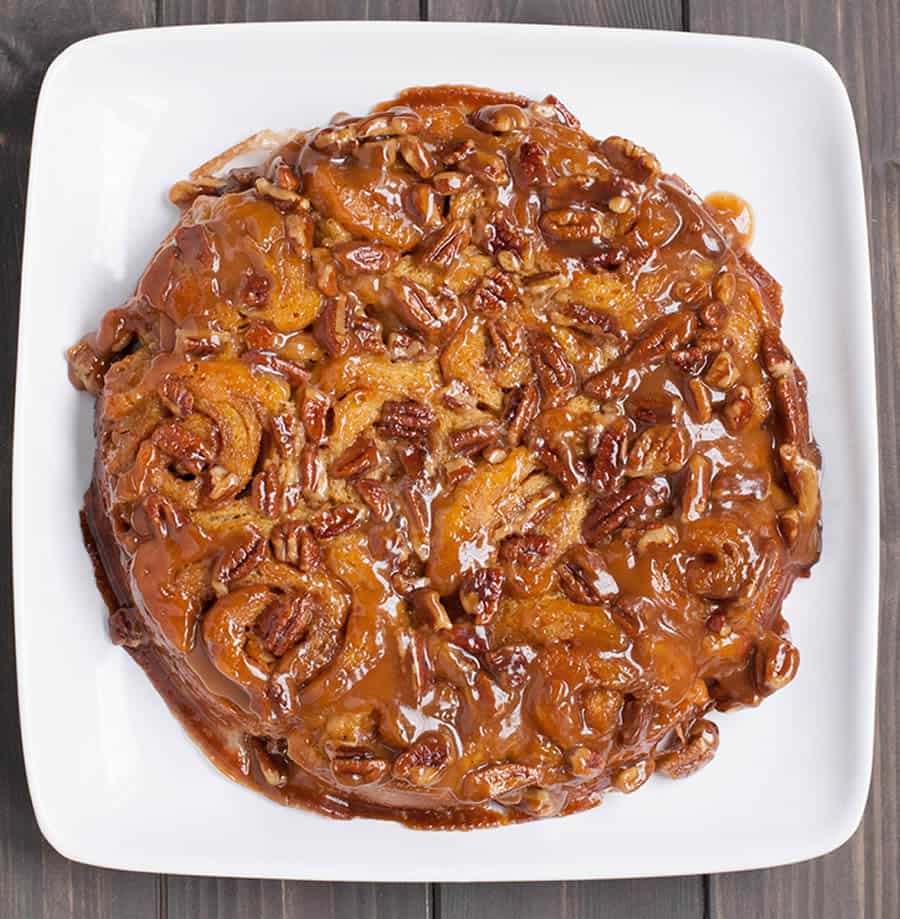 Seriously, when I flipped the pan and saw all of those toasty pecans just dripping with caramel sauce, topping the most fragrant pumpkin cinnamon rolls, well, I stopped thinking about my apple tests that went awry. My family could smell the spicy goodness throughout the house and they kept visiting me in the kitchen to see if it was time to taste test. When I finally finished shooting, the rolls were still warm, just the way you want to serve them. 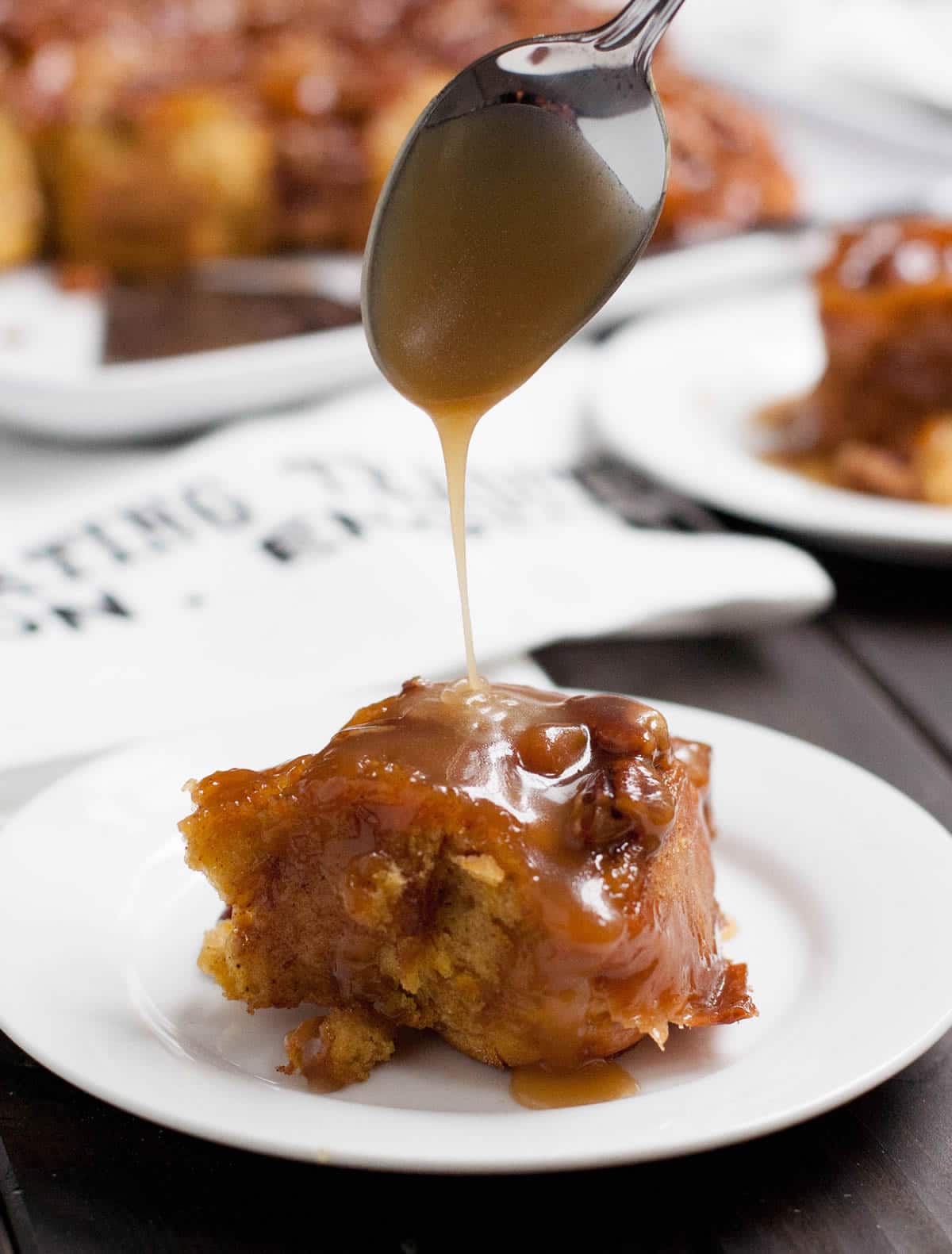 I allow for some reserved sauce to drizzle on after they’re baked. I know there are some die hard, drench your rolls, fans out there, so that extra sauce is for you, my friends. For me, they were perfect without another drop. (The photo of the whole pan of biscuits on the serving plate is without any extra syrup.)

I never bite right into a cinnamon roll. Sacrilege! These Pumpkin Biscuit Sticky Buns were no different. I am quite content and very determined to start on the outside and slowly unravel all the spicy, tender goodness….saving that center bit until the very end…But I have to say, because these are made with tender biscuit dough, that last bite, is pretty much just as good as the first. 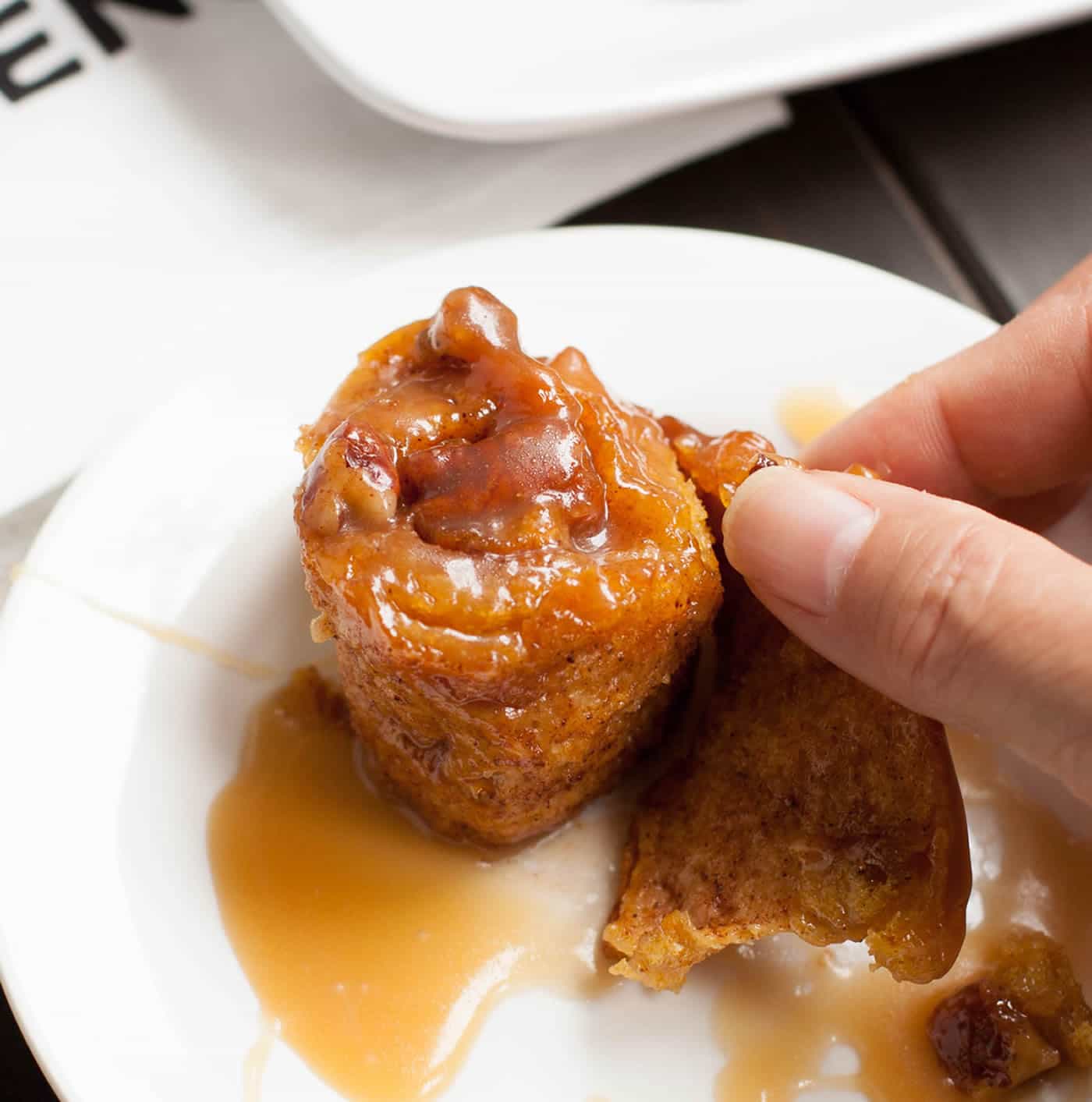 *Biscuits are best served immediately. Store leftovers at room temperature wrapped in foil. You can reheat them the next day, covered with foil in a 350 F degree oven. (If you think you're going to have leftovers, don't drizzle the extra sauce over all of the biscuits. Just do it individually and save the rest for after you reheat the biscuits the second time.)

*You want your bits of butter that you cut into your dough to be firm when you bake these. If they are all melted from too much time out or too much handling, then you need to put your dough back in the refrigerator or freezer for 10-15 minutes to firm the dough up.

*I roll my dough out on plastic wrap. I lay two sheets down on my counter and then flour the surface. My plastic wrap sticks to the counter, so there's no shifting. (This doesn't work well unless your plastic wrap is clingy enough to stick to your counter) If my dough gets too warm from handling, I just cover it with another piece of plastic wrap, move the whole thing to a baking sheet and put it in the freezer to firm up as mentioned above. The plastic wrap makes it easy to transport the dough from the counter to the freezer and back. And it makes for easy clean up.

*If your dough is cold enough to roll, but it's gotten very soft from being out too long, you can also refrigerate/freeze the biscuits after you've rolled, sliced and put them into the pan. Basically, you just want the butter firm when you bake the rolls. You can put the dough in the refrigerator to get cold at any point in the process before baking.

*The amount of biscuits you yield from this recipe will vary simply based on what size your dough is when you roll it and how thick your slices are when you cut it. It may differ a bit each time you make it unless you decide to be extremely exact each time you roll it. I only measured it for the post to give you an idea. I usually wing it and do it by eye, so I may end up with anywhere between 9 and 12 rolls. If you accidentally (or purposefully) roll it from the short side, then you will end up with larger biscuits with more layers, but you will get less biscuits. Either way, you'll be fine.

*I saved the uneven ends I sliced off and baked them separately. I would have just tucked them between the "good" rolls in the pan, but it didn't make for a nice photo, so I baked them up on a separate pan in my toaster oven because they would bake up so much faster than the full pan and I didn't want to keep opening the big oven to check them. (The kids always fight over those scraps :)

*I gave you enough glaze in the recipe to put in the pan, then top the biscuits again after they are baked. I drizzled the extra on each biscuit individually while serving. It makes for a super drenched roll. For me personally, I didn't need any extra, but it's a sweet bonus for those who do. If you want to skip the extra glaze, cut the glaze recipe in half and use all of it in the bottom of the pan. Alternatively, if you don't want to make sticky buns, you could simply bake the rolls without the glaze or pecans. You'll just follow the baking directions in the Buttermilk Biscuit Cinnamon Rolls recipe.

*Store extra glaze covered in the refrigerator. You can quickly reheat it in the microwave. If you don't use it for your rolls, it's also good over pancakes and waffles.

You mentioned orange zest, but I don’t see it in the recipe. Did you use it?

Hi Pat! Yes, I did use it. You'll find it in the recipe for the actual pumpkin biscuit dough that's linked in the ingredients. Once you make that dough from the biscuit recipe, you're ready to use the recipe for the sticky buns. The zest is optional, but I definitely used it, loved it and would recommend it!

karrie @ Tasty Ever After

These look unbelievably good! I could eat sticky buns every day of my life, especially ones made with pumpkin dough. I'll have to make them for breakfast on Thanksgiving morning.

Karrie, they're perfect for Thanksgiving morning!

Oh my, these look amazing. I'm going to include them on my friday links roundup next week!!!

Wow, Jessie, thanks! I love your round ups!

These look wonderful! Since you mentioned scones and biscuits and scones—any chance you might come up with a pumpkin scone recipe? Your scones are the best! Thanks!

Thanks Karen! I've actually been working on a pumpkin scone on and off since last fall. (I have another reader waiting for that recipe as well.) I just recently went through 3 trials testing pumpkin scones, and while they were all good, I can't say that they were exactly what I was looking for. Pumpkin does things to the texture and I haven't decided yet if I'm ready to settle for a fluffier texture. I've changed the ratios and I still haven't hit upon a scone that meets my expectations. If I can nail it before pumpkin season is over, then I will definitely post it!