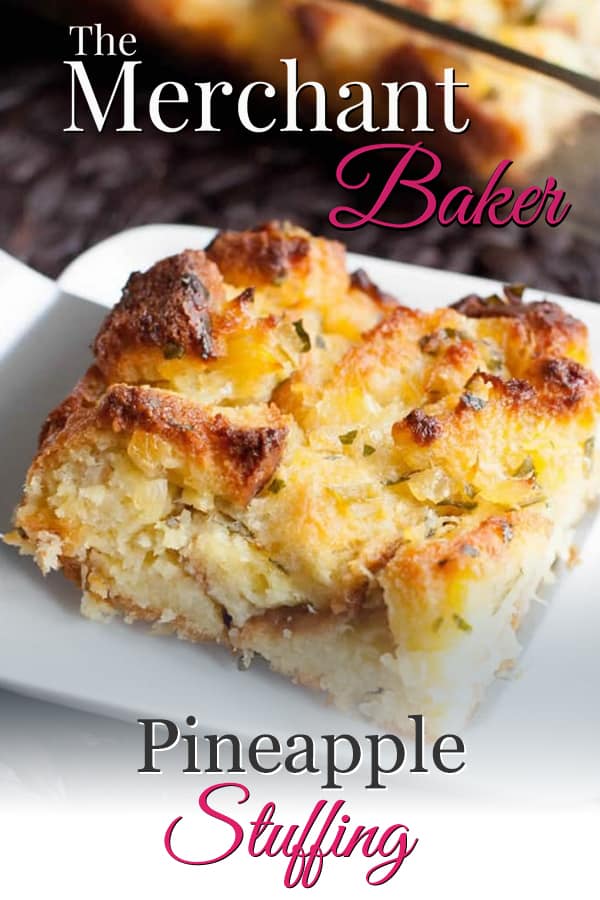 Have you ever tried Pineapple Stuffing? 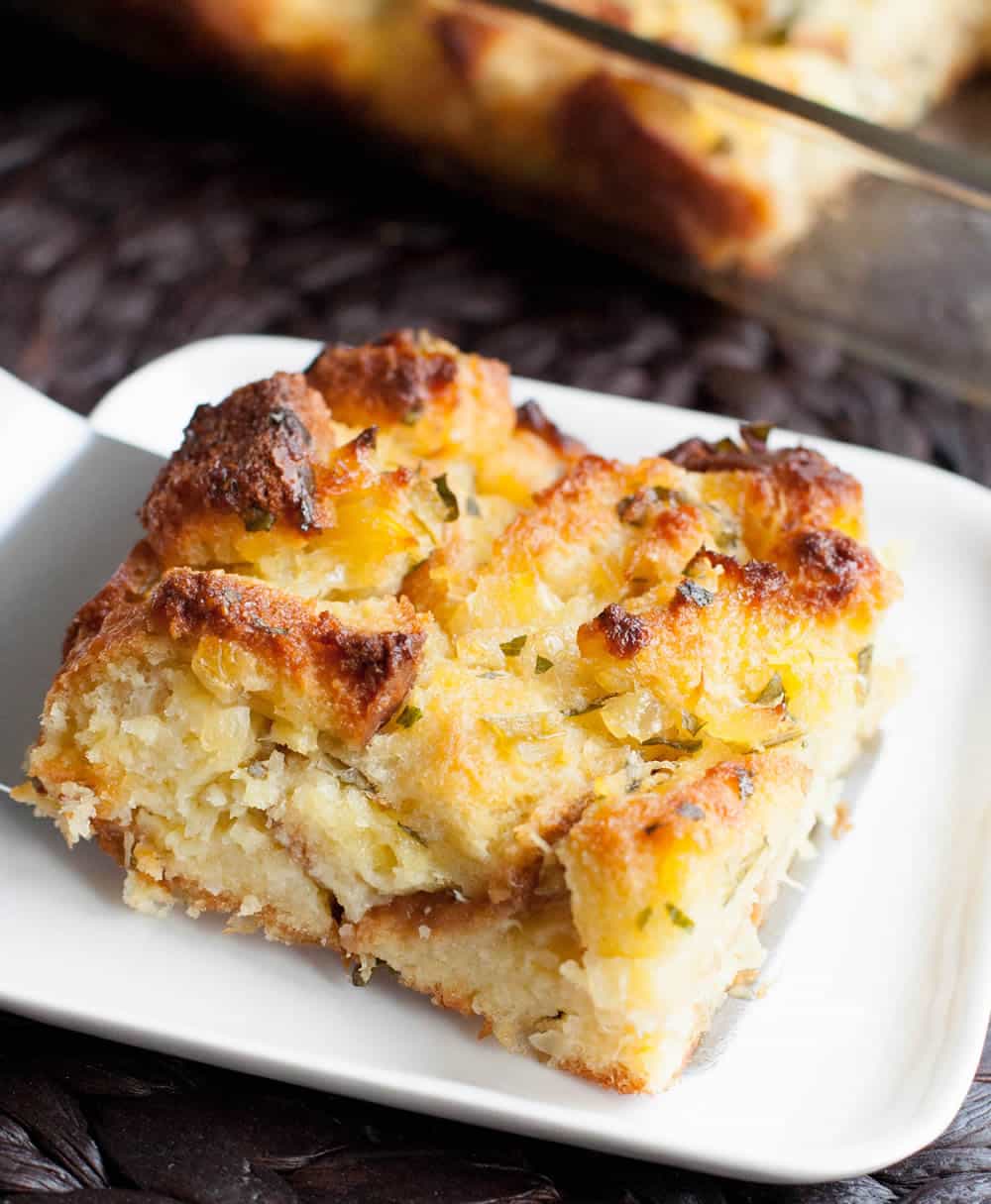 I had never heard of it until I married my husband. It is a mainstay of all the holiday dinners that my sister in law hosts. 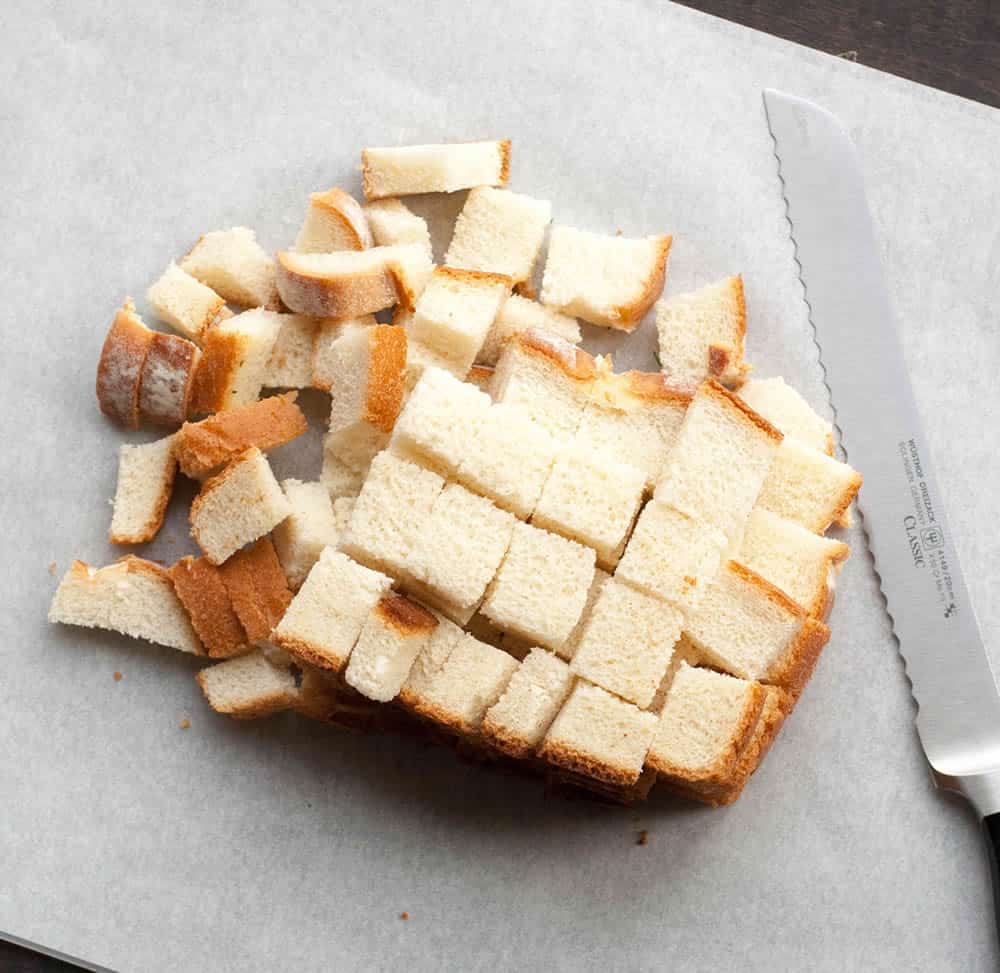 But, I had never had Pineapple Stuffing. I was intrigued, but it made sense. After all, my sister in law served it with ham, and pineapple and ham are a classic combination, one that I love.

So, I took a nice sized serving and nestled it right next to my sliced ham. 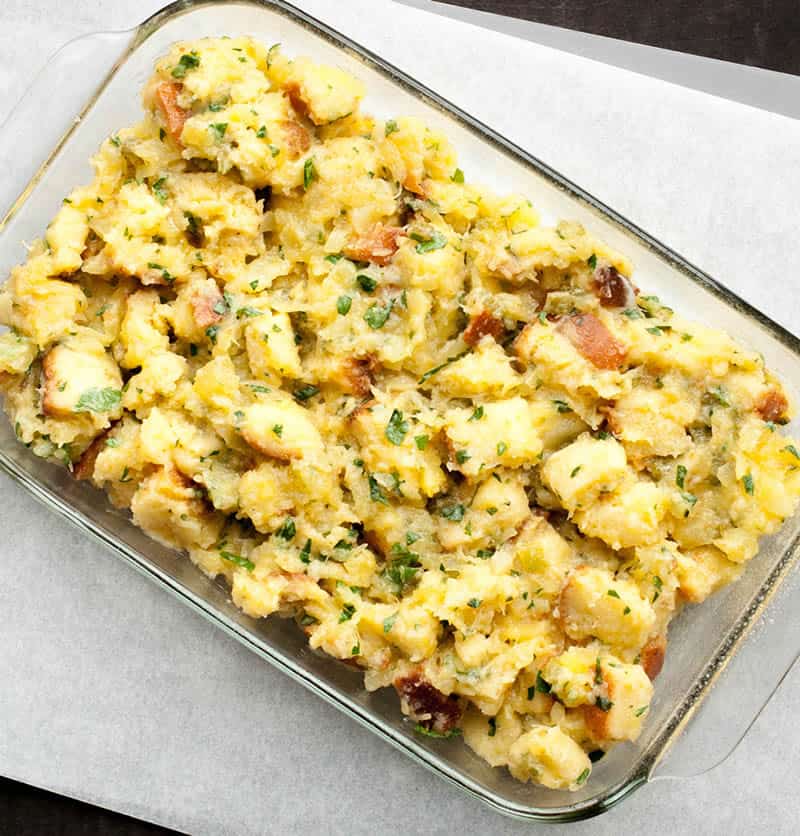 I remember taking my first bite. It was sweet and buttery and pineapple-y. It tasted great with the saltiness of the ham. But, I had never had a stuffing like this one. It was like…dessert!

This is a stuffing that my stuffing averse daughter willingly puts on her plate, the stuffing that my son asks for seconds. (Actually, my son loves all kinds of stuffing, so that doesn’t really count.) But everyone loves it.

It’s kind of like the sweet pineapple slices placed all over a ham, that have been drenched in glaze and caramelize in the oven while the ham bakes, except it’s the stuffing version of that. There’s usually two pans of this stuffing and I don’t think I’ve ever seen leftovers. 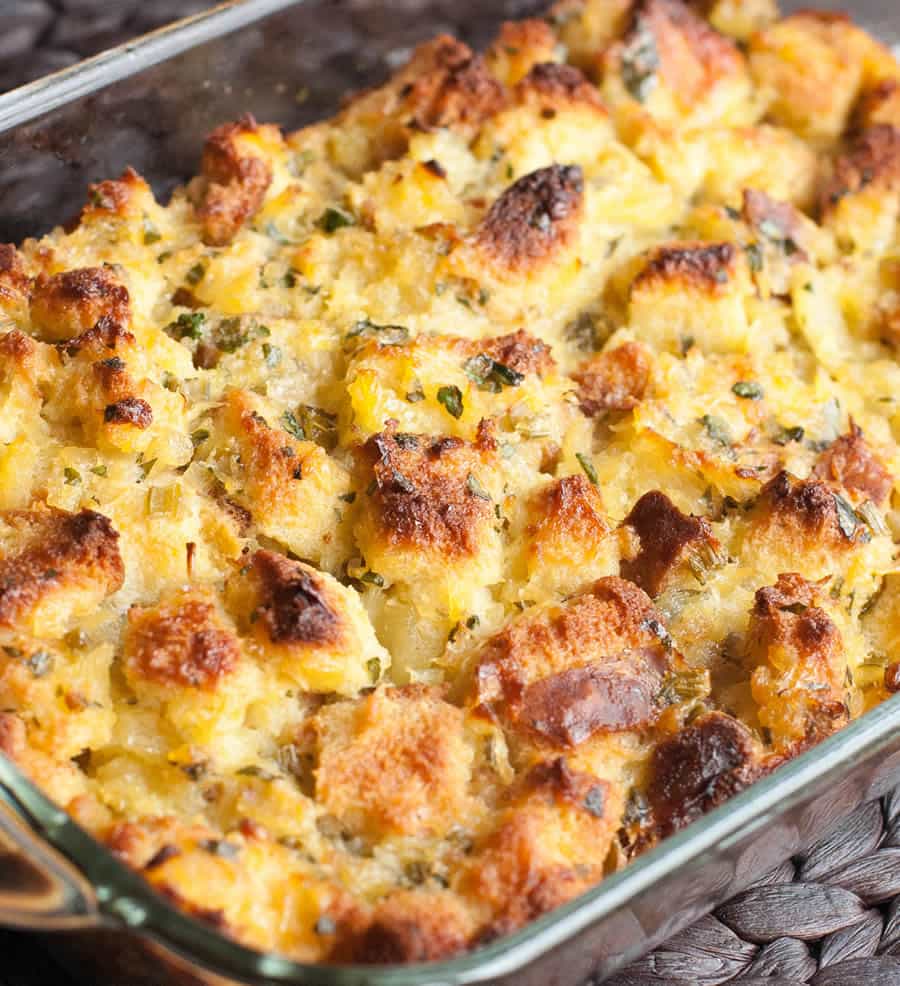 And then, one year, my sister in law asked me if I could make the stuffing. The person that normally makes it wasn’t going to be able to do it. (Ok, no pressure.)

So she sent me the recipe and just said to triple or quadruple it. When I got the recipe, I realized why everyone loves it. It’s all butter, sugar, eggs, pineapple and bread. What’s not to like? It’s like a cross between pineapple cake and bread pudding.

When I quadrupled the recipe and realized I needed a dozen eggs, 4 cups of sugar and a pound of butter…I thought I’d better take a smaller serving for myself the next time :/ Stuffing is always a splurge, let’s be honest, but this trumped that. 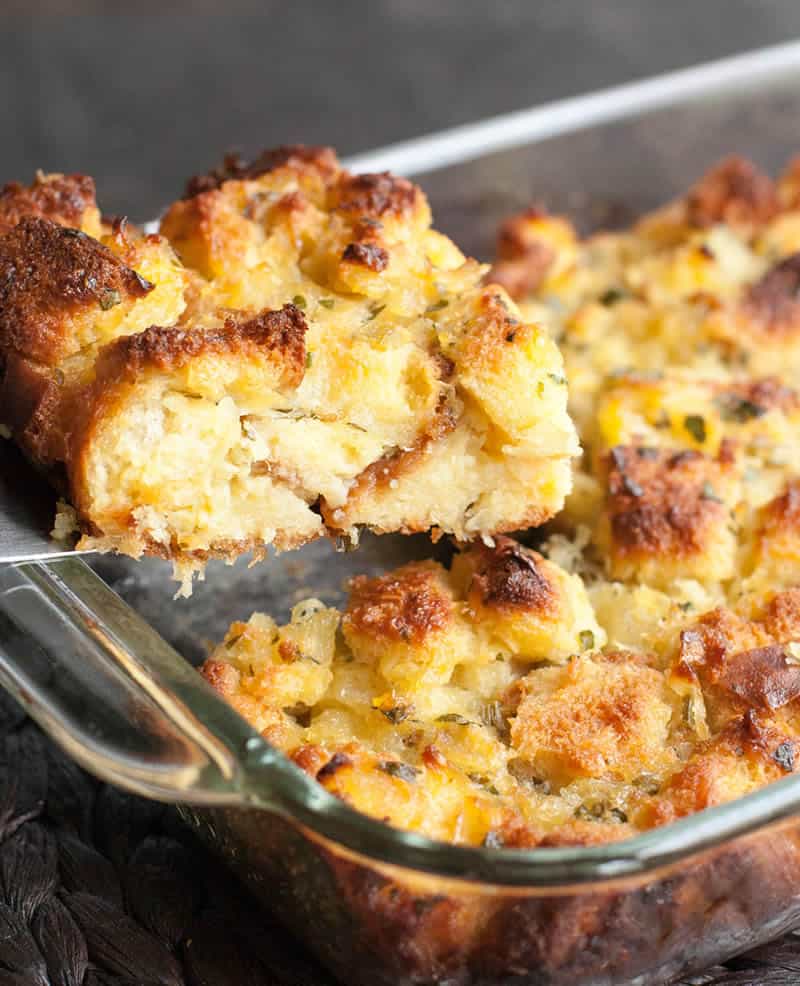 This post is heavily inspired by that stuffing, but I decided to take a more savory route and while on that path, see if I could reduce, even if only a little, any of my guilt in eating it.

So, I started in a classic way, sauteing chopped celery and onion in a little less butter than the original recipe. I cut the sugar in half and added a little more bread to soak up the flavors.

I added fresh parsley. I went through a few trials changing up ratios of sugar and butter and bread before I achieved my goal. 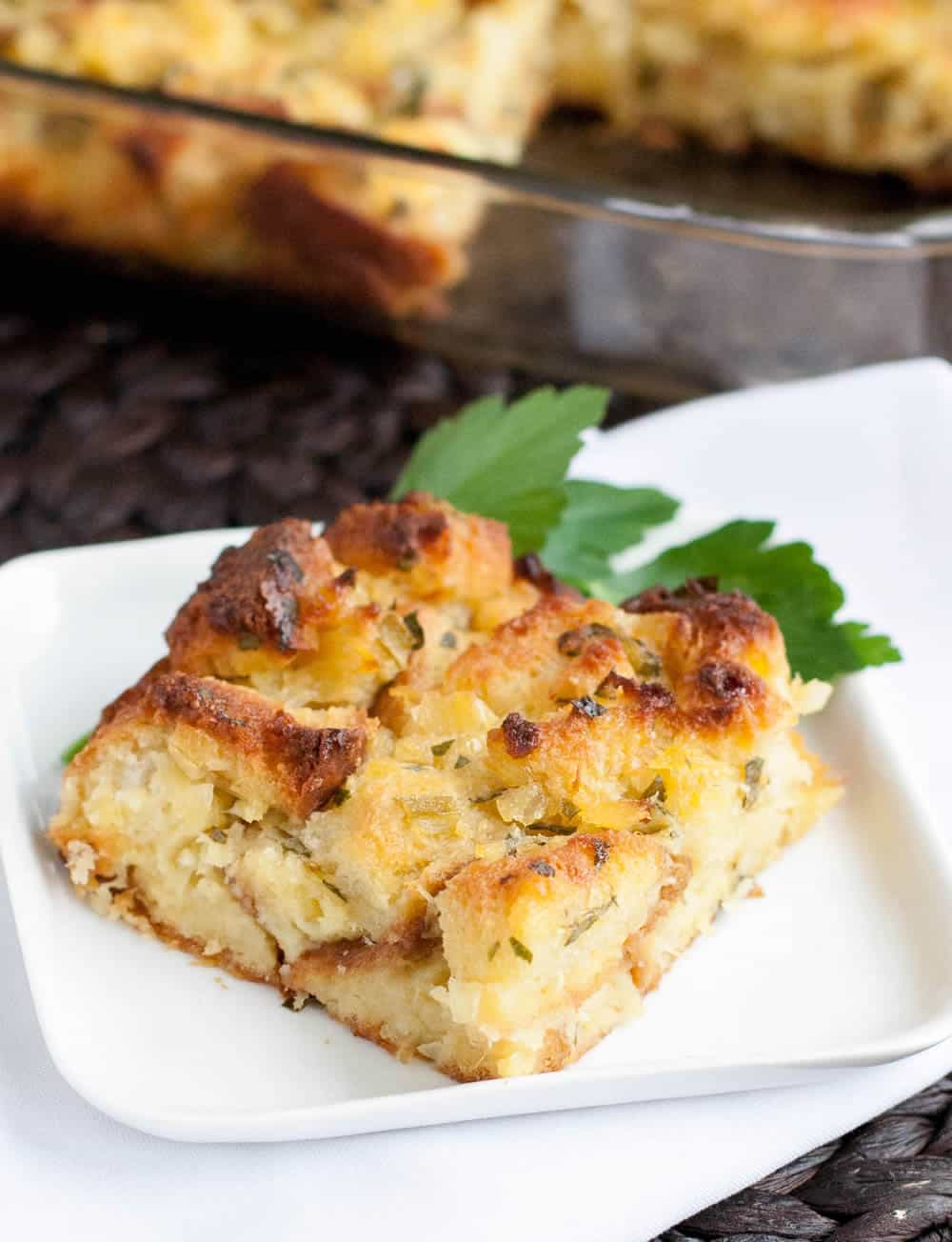 My final trial resulted in a nicely balanced sweet and savory stuffing that still had plenty of sweetness to be reminiscent of the original recipe, but a stuffing where I could taste all of the flavors of onion, celery and pineapple.

The stuffing stays perfectly moist but has wonderful crispy edges where the bread cubes get toasty. It is a perfect choice to pair with ham or pork dishes.

Here’s the thing though…my taste testers liked every. single. trial. They love the original and they loved every version I made of that original. I was stumped as to which recipe I should post, which version would be the ultimate version?

I think what it comes down to is that pineapple stuffing is simply a winning concept. Personal preference will dictate which will be your favorite. You can add or subtract sugar. Add or subtract butter. Change the quantity of bread you add for a more moist or more dry stuffing. 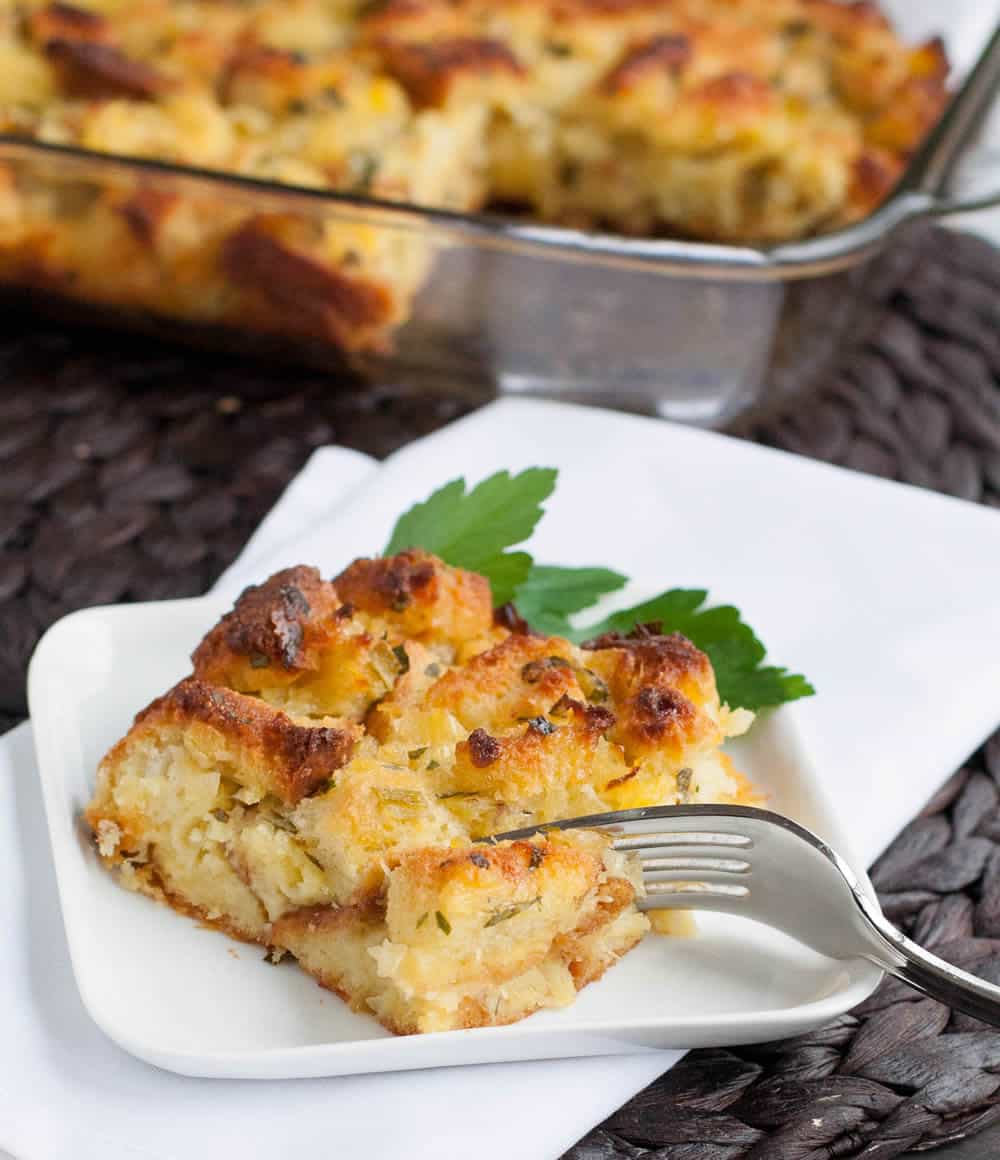 I’m going to give you the recipe for my sweet and savory version of Pineapple Stuffing, the one that I set out to conquer for this post.

Aaaand, I’m going to give you the quantities for the original sweet version that is a long standing tradition with my husband’s family (see notes for those.) Either way, sweet and savory or just sweet, it’s stuffing, right? So, the answer is always, “Yes,” isn’t it? 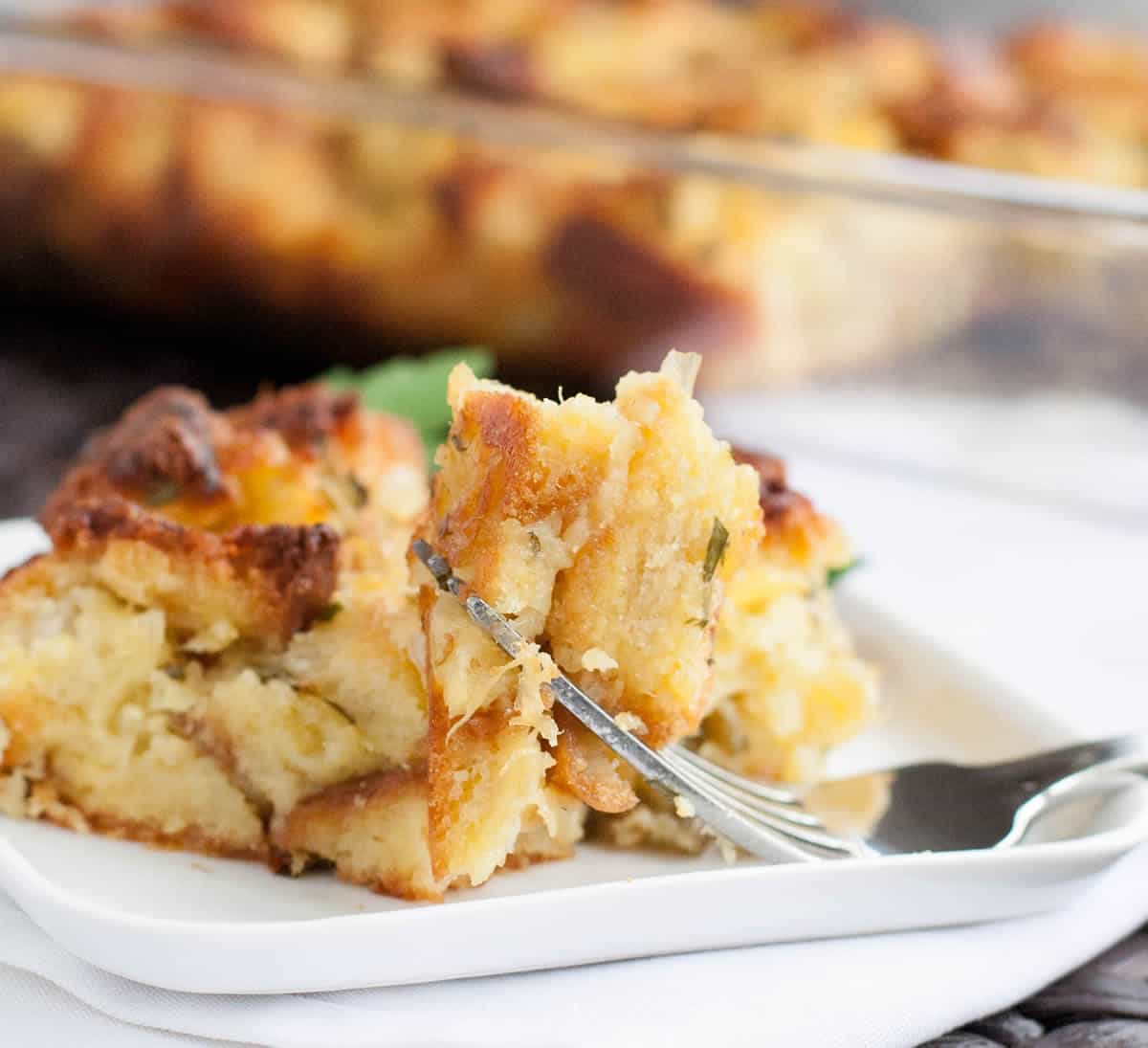 *I drained the pineapple in a sieve pressing down gently a few times to squeeze out additional juice. You don't have to press it until it's bone dry, just until it's not dripping lots of juice.

*You could also try fresh pineapple, but you may need to add some pineapple juice or veg/chicken broth if it's not a juicy pineapple.

*I used kosher salt, if you use table salt, reduce to 1/2 teaspoon, or to taste.

*If you use salted butter, reduce salt to 1/4 teaspoon, or to taste.

*Make sure to use a sturdy white bread. Pillowy light bread will not hold up well to all of this moisture, especially since we are not using stale or toasted bread.

*If your stuffing is in a dish where the foil will rest on top of it while baking, go ahead and give the foil a little spray with cooking spray to help prevent the stuffing from sticking.

*For the original sweet stuffing, use 1 stick (4 ounces) salted butter (melted), 1 cup sugar, 4 eggs, 1 (20 ounce) can of crushed pineapple, drained and 5 slices cubed white bread. Mix together and bake in prepared pan, uncovered, at 350 for about 1 hour.

This specific recipe is so, so very good. It’s my favorite side dish with ham. I have served this every Christmas and Easter for the last several years and finally decided to take the time to give it its deserved 5 star rating. Thank you for a great recipe!

Hi Sheila! Thanks so much for taking the time to come back to leave such a lovely comment :) Merry Christmas!

This goes right into my 5* Favorites folder. The whole family loved it. I loved the addition of celery and onion. Most pineapple stuffing recipes don’t have celery and onion. This is also a beautiful dish as well for our Easter Holiday ham dinner. Thank you for a winning recipe.

Wow! Thanks, Janet!!! I'm honored that my version of this stuffing was such a hit with your family :)

I've never made stuffing before so I just want to be sure - the bread does not need to be dried out ahead of time? I can just cube it straight from the loaf and add it to the mixture?

Hi Loretta! You're question is a good one! Normally, I use dried out bread (or toasted) for other stuffing recipes. Using dried bread allows room for the bread to soak up more liquid. In this recipe, however, I use only fresh. I based it on the original sweet version that uses a sturdy white bread. Sturdy bread is important though. If you use a very soft, pillowy bread, it won't be able to stand up well to the rest of the ingredients. I've used Trader Joe's Canadian White Bread or Pepperidge Farm Hearty White Bread. You just don't want anything like Wonderbread or it won't hold up. In any case, the liquid amount in this recipe works perfectly with fresh bread. As you've said, just cube it up and add it to the mixture.

Hi Mary jo, you'll see in the first step of the recipe that I suggest an 11 x 7 or 2 quart casserole dish. Hope that helps!

Does the original erosion have the onions as celery too, or only the ingredients You list in the notes? Thank you. Can't wait to try one of these for Easter.

Hi Barbara, the original version includes only the ingredients listed (sugar, butter, bread, pineapple and eggs.) Both versions are delicious but the original is definitely all sweet, no savory. It's kind of like pineapple upside down cake with more pineapple and less cake. My version is more like a traditional stuffing. But truly, I love them both! I hope you enjoy whichever one you pick, or make sure to eventually try both so you can pick your favorite :)