One Pot Mushroom, Spinach, Artichoke Pasta is my solution to, “I don’t really feel like cooking dinner tonight.” 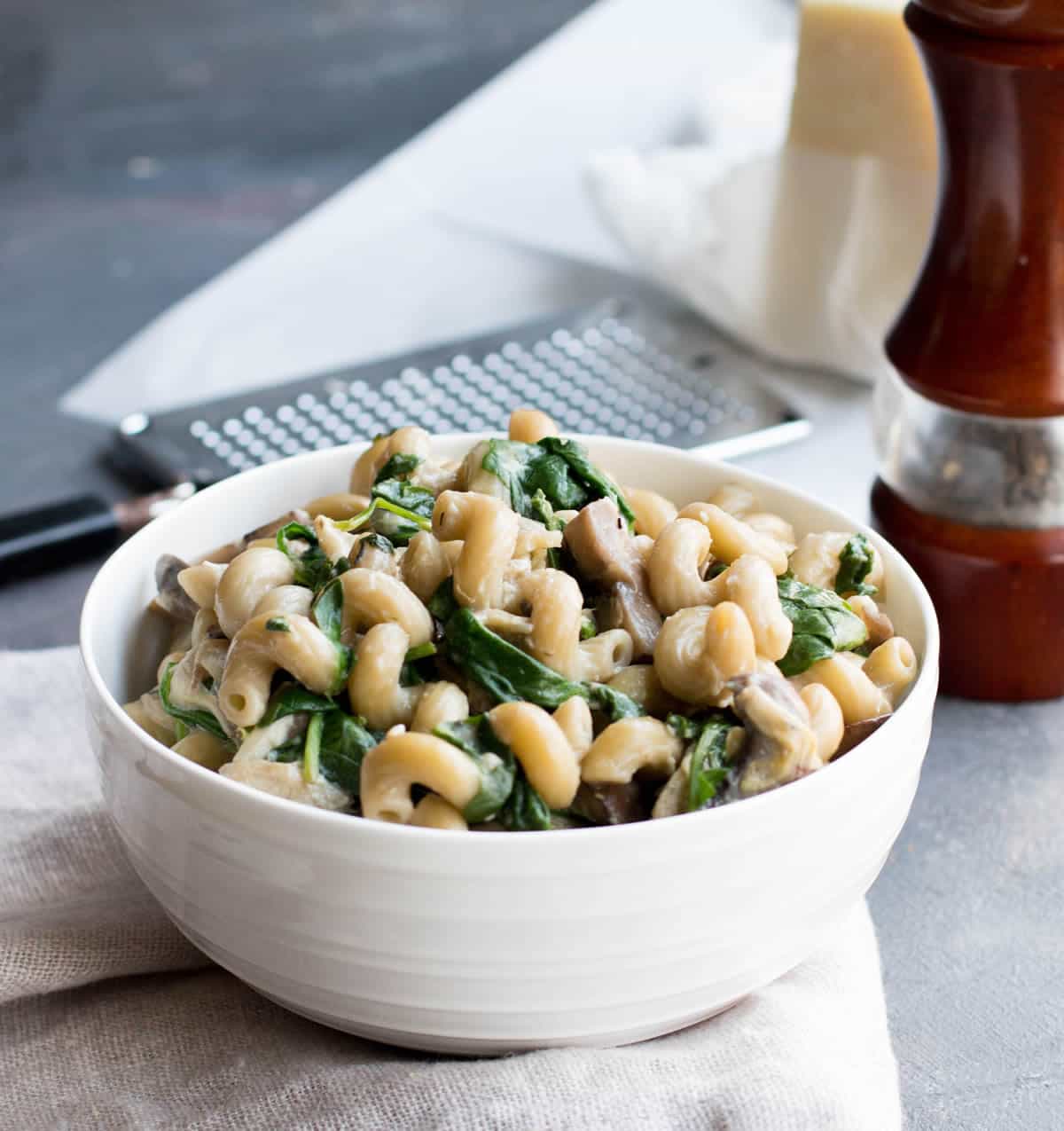 I started experimenting with this whole one pot pasta deal last year. As a food blogger, it can be easy to get burned out on being in the kitchen. In fact, after lots of recipe testing and photo shoots and dishes, I often want to be anywhere BUT the kitchen. And if one of those burned out days precedes my meal planning and shopping excursion, then I’m definitely adding a one pot meal to the roster that week.

Everything I’ve always learned about pasta has said that pasta loves water. Boil pasta in lots of water…in well seasoned water, of course. I started to read articles about the fact that pasta might not need as much water as previously believed. So, when this whole one pot thing started to become popular, I was suspicious, but intrigued. I thought, wait, I don’t have to cook the pasta in a separate pot? I don’t have to drain it? I just add stuff in and it’s going to come out okay? #sacrilege 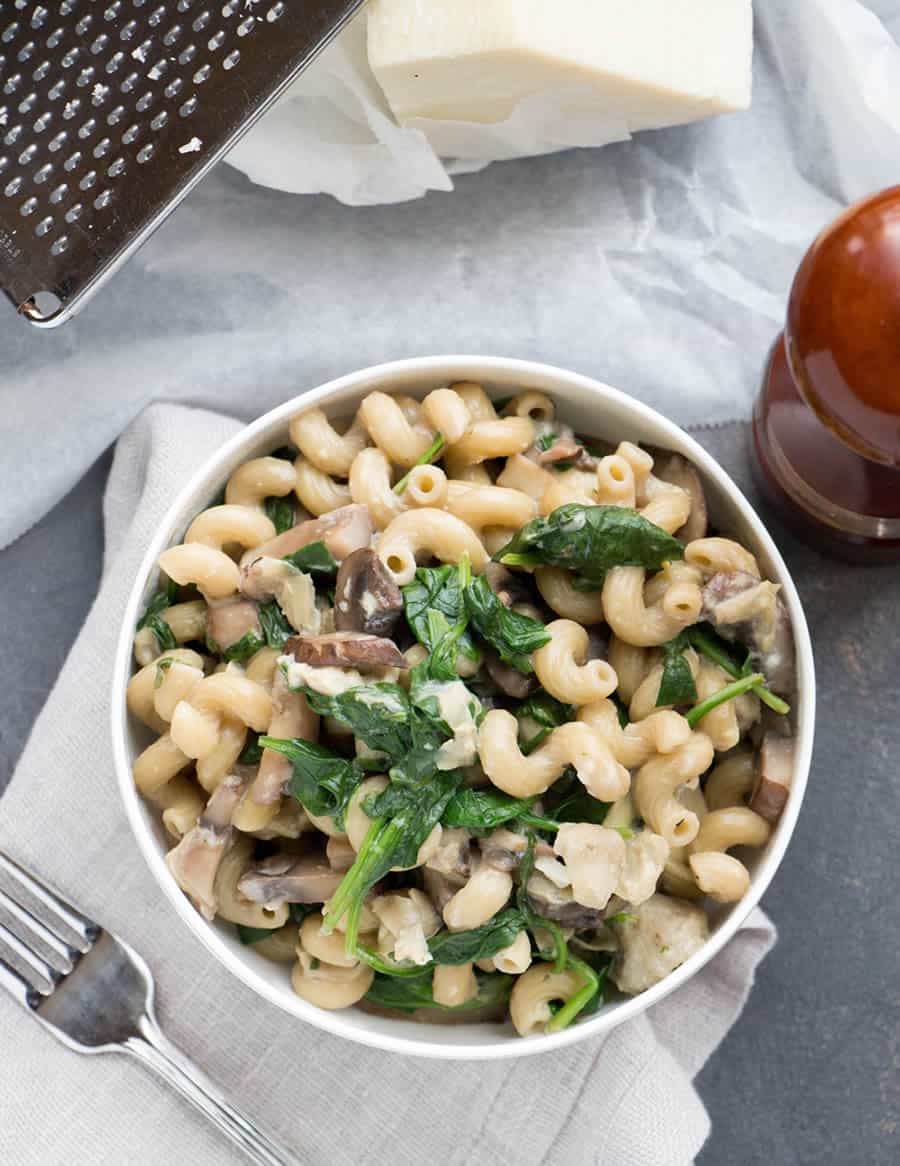 This recipe makes a large batch. There’s easily enough to feed our family of four twice and then some. If I’ve said it once, I’ve said it a million times, I LOVE leftovers. Sometimes I love them because dishes like chili and stew and brownies and banana bread simply taste better the next day. But for dinner, leftovers are a time saving strategy for me. Cook once, eat twice. I try to plan two meals like that each week, but definitely at least one. Life is just too busy to worry about meal prep every. single. night. If I plan my meals right, I’ll have a meal ready to just heat up on the busiest night of the week.

I’m sure many of you have tried some one pot pasta recipes, but for those of you who haven’t, this is how it works. Empty a box of uncooked pasta into a large pot. I love, love, love celentani pasta. It’s like elbow macaroni that just doesn’t know when to quit :) I use Barilla which has tiny little ridges in the surface of the pasta. The corkscrew shape and those little ridges are perfect for clinging to all the flavor we’re going to add to this dish. If you can’t find celentani, feel free to use penne or elbow macaroni or other short shaped pasta. 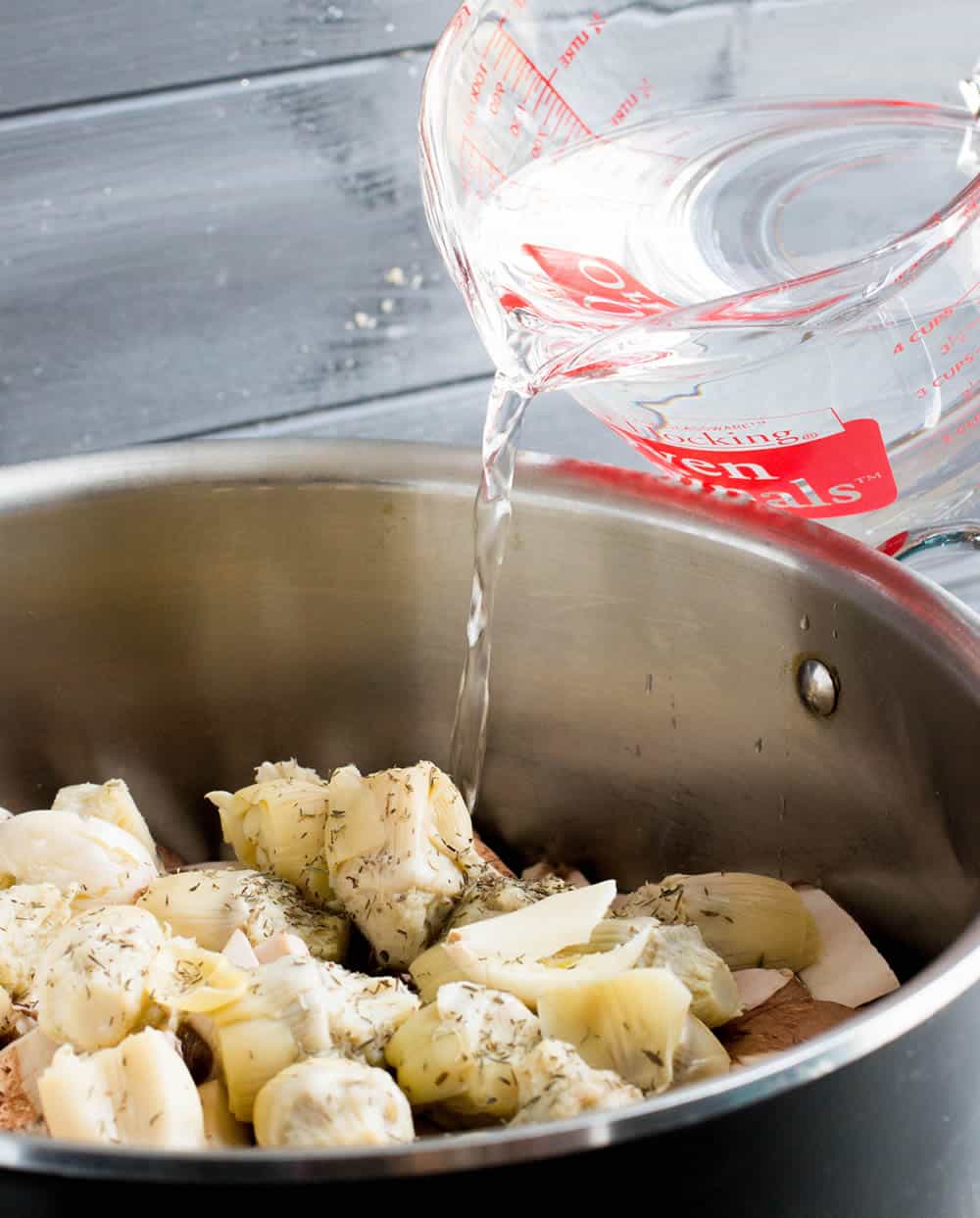 Dump a bunch of raw sliced mushrooms on top of the pasta and some chopped up artichokes. I use petite artichoke hearts. I buy this 2 pound+ jar at Bj’s and they’re perfectly tender. Sometimes the leaves on canned artichokes can be a little woody. These are not. They’re also not as acidic as some of the canned brands. Right now, they’re my fave for use in all my recipes that use artichokes. (I was actually looking for frozen artichokes, but couldn’t find them anywhere.) I drained them, rinsed them briefly and dumped them in on top of the mushrooms. A little seasoning and then water is poured over all. 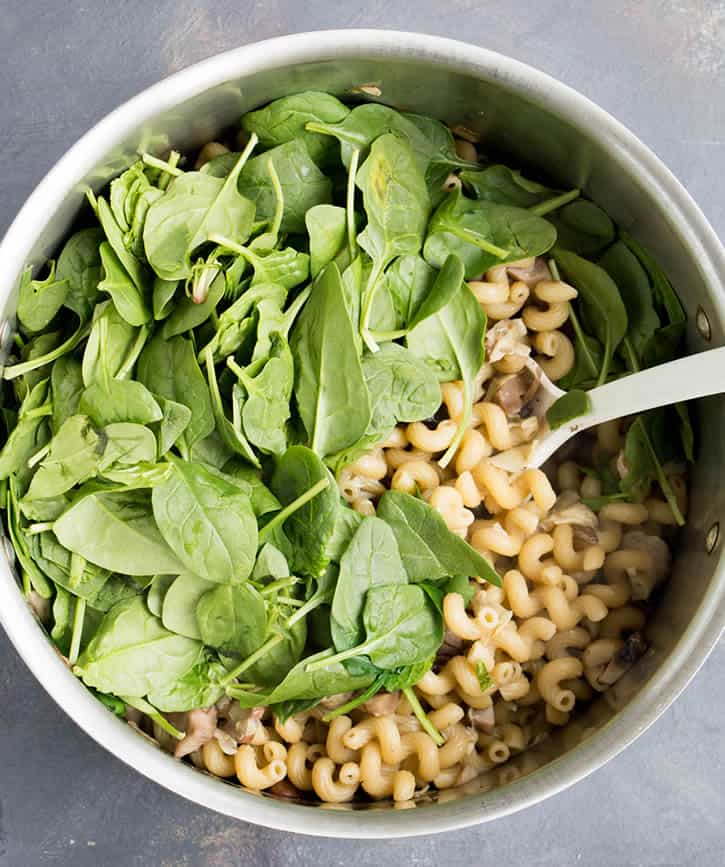 Stir it up and bring to a boil. Reduce the heat and continue to gently boil until the pasta is at desired tenderness. Depending upon your pasta, this might take 10-12 minutes. Then add a large container of fresh spinach. You can add in big handfuls and then stir after each addition until it’s all wilted and combined. That only takes about a minute or two. Then, add some grated cheese, some heavy cream and season to taste. That. Is. It. 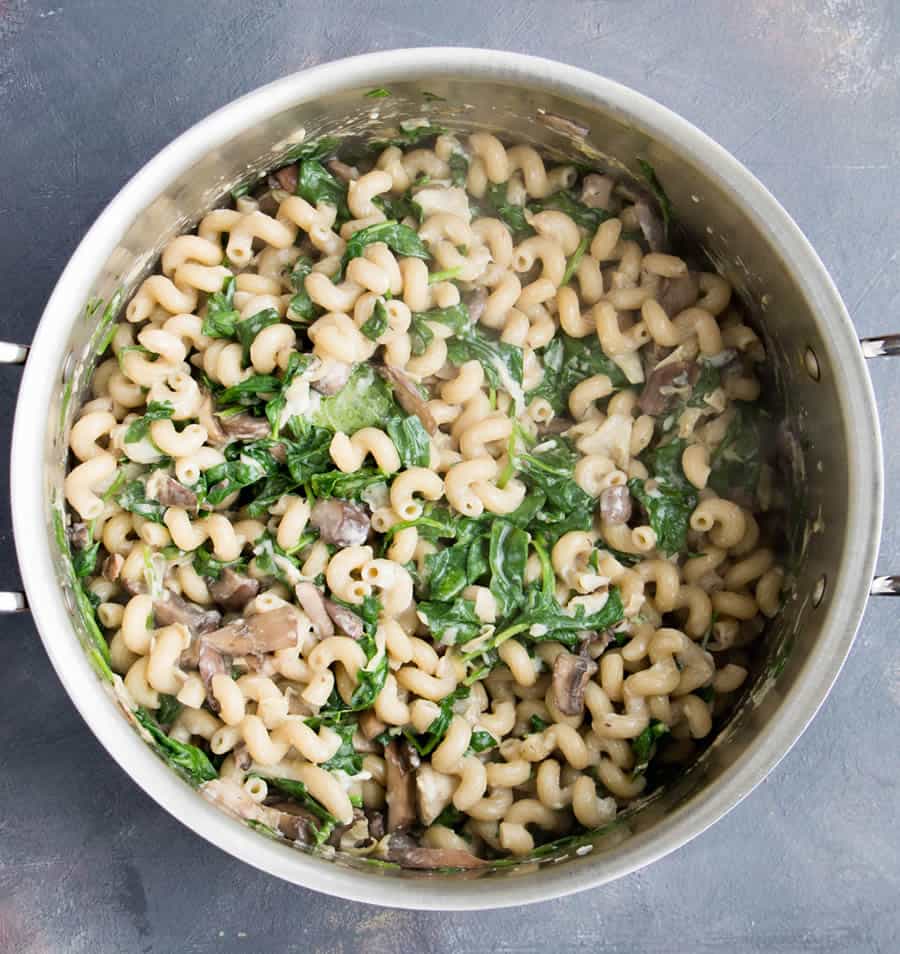 You end up with a giant pot full of creamy, mushroomy, spinachy, artichokey pasta. It’s a delicious meat free option, though I’ve also added cooked shredded chicken for an even heartier meal. The mushroom flavor in mine was the most prominent, mostly because I bought a family pack of sliced mushrooms (20 ounces.) My kids love mushrooms, so I just threw them all in, but you could use 1 pound, or even 8 ounces and then bulk up on the other veggies. 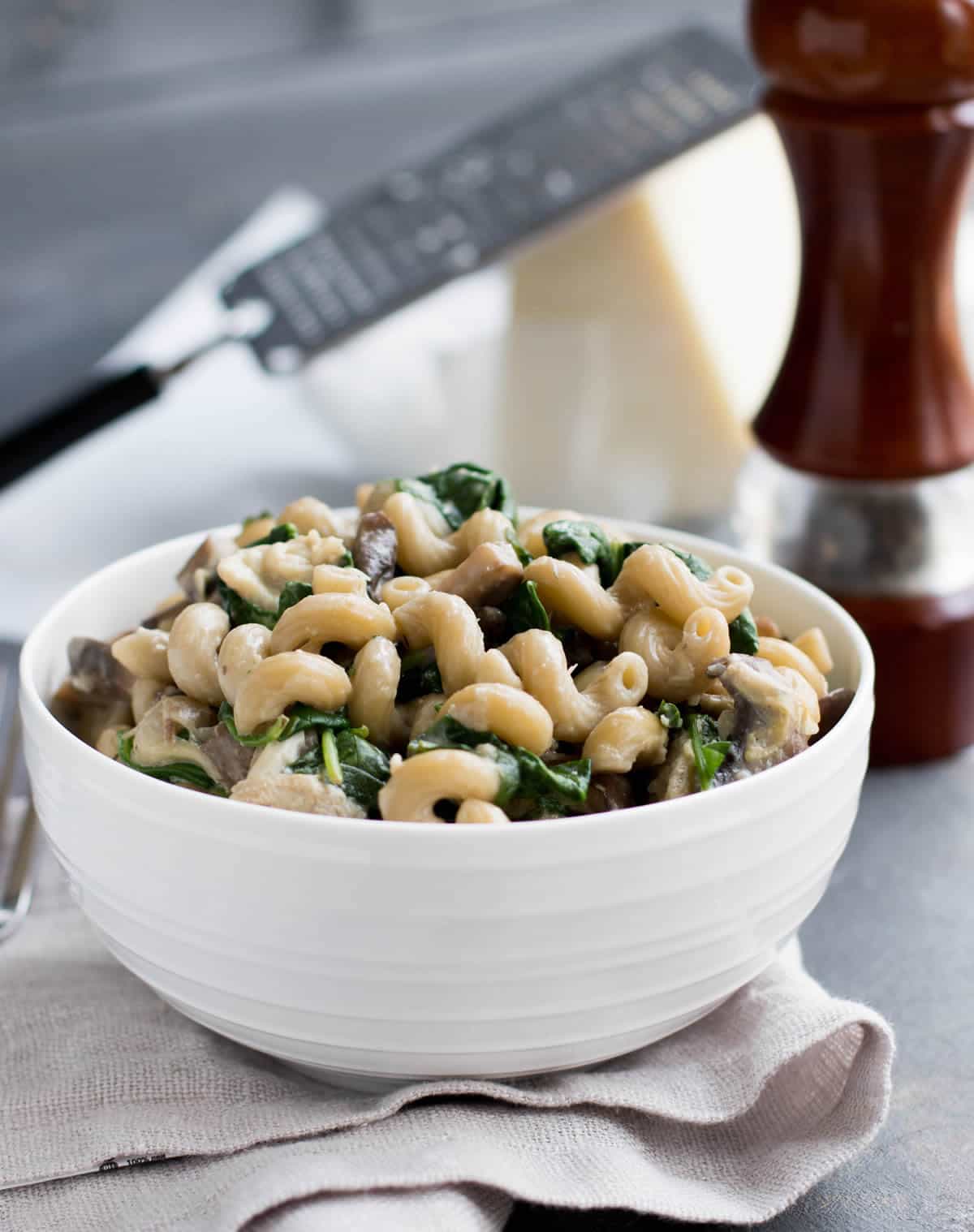 I also used a lot of fresh spinach. I bought a big 11 ounce container. When you look at it, it seems like it could never fit into the pot, but trust me. Spinach wilts quickly and you’ll be surprised how that raw mass of baby spinach practically disappears when you stir it in with the hot pasta. Next time, I’m also going to use the whole large jar of artichoke hearts. I was originally worried that the acidity of too much canned artichoke would ruin the flavor, but between the mildness of the brand I use and taking the extra step of rinsing, I need not have been concerned.

Will I change the way I make pasta forever? No…If I’m not doing a one pot deal, I’ll still be filling a pot with water and making it separately. On the other hand, I’ve definitely been exploring other ways to take advantage of this easy process. Anytime I can add another easy but delicious meal option to the week is a win win for me and my family.

Every time I make this, I’m surprised at what a quick, delicious and comforting dish it is. But, I have to be honest, when I look at a big batch of One Pot Mushroom, Spinach, Artichoke Pasta…what I’m really thinking is… 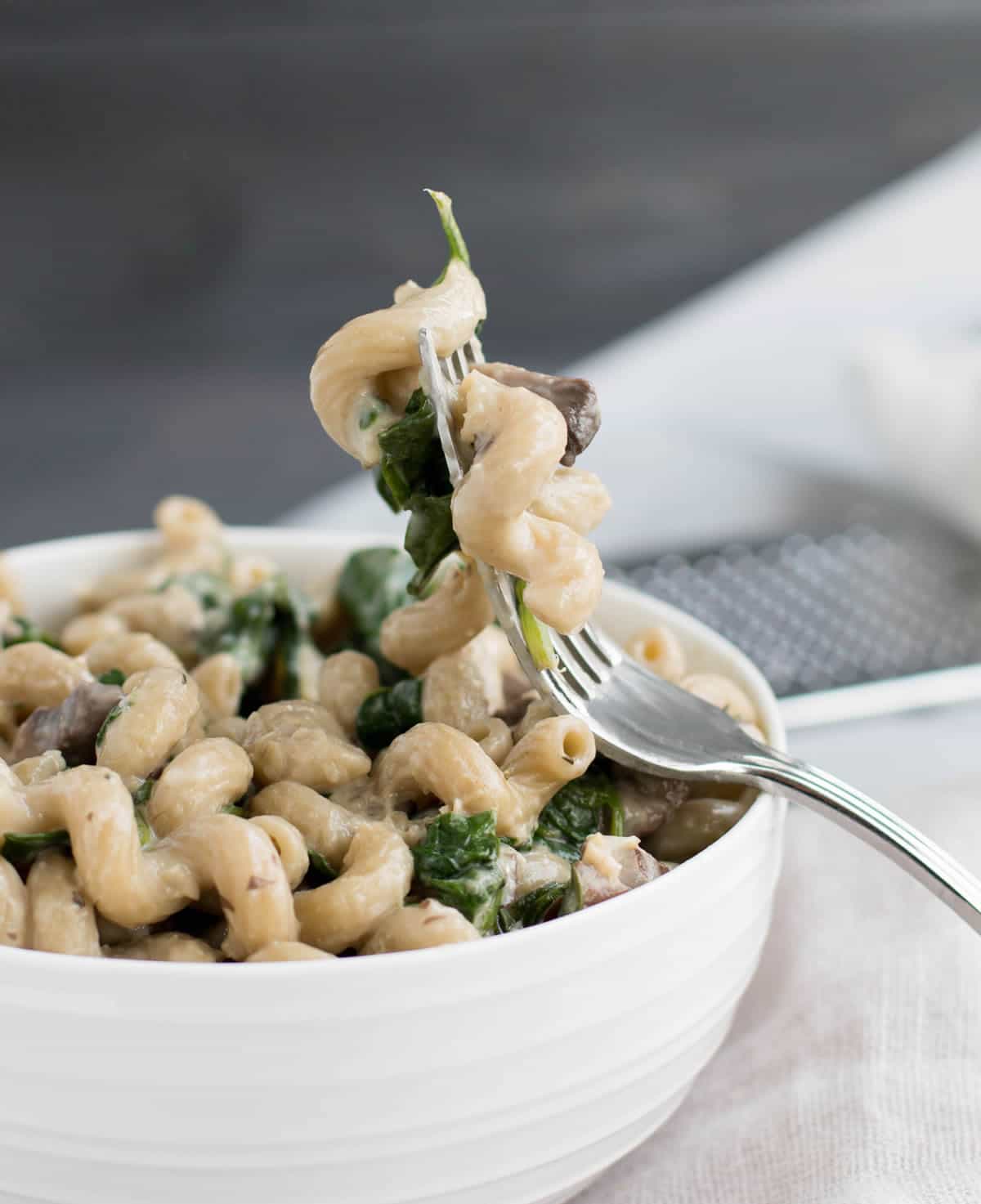 Ha! I don’t have to cook dinner tomorrow!

*I've given amounts for the added vegetables, but really, you can adjust the amount you use to your taste. I like to add as much as possible to not only bulk up the meal, but help insure we're getting plenty of vegetables in our meal. Do insure, however, that you stick with the pasta and water ratio. You need enough to both cook the pasta and then have some residual liquid to help create the "sauce."

*I used petite artichoke hearts. If yours are larger, you might want to halve or quarter them. Don't skip the rinsing process, it will help reduce the brininess. I originally wanted to use frozen artichoke hearts to eliminate any briny issues, but could not locate them anywhere. Also, I only used about 2 cups of artichokes, but I would probably double that next time.

*You can use other types of pasta, but I happen to love this shape. Elbow, penne, fusilli and rotini are also good choices. Check the box for guidelines on cooking time.

*You can also add shredded cooked chicken in to bulk up the meal. I like to add it in before the spinach so it has time to heat up.

*I used baby portobello mushrooms. White button or cremini mushrooms are also fine. My pack was a 20 ounce family pack. If your mushrooms are sold in 8 or 16 ounce containers, just buy enough for 16 ounces or adjust the amount to your preference.

*I like to season this dish at the end. The romano cheese adds saltiness, so I like to check after adding the cheese to insure I don't over season.

*I also like to add just a sprinkling of red pepper flakes to my own serving for a little kick.

*This makes a large batch of pasta. Leftovers can be stored in an airtight container in the refrigerator. Add a little water to the dish to help create moisture when reheating.