This Healthy Winter Fruit Crisp is perfect for dessert. But guess what? It can also be a great choice for breakfast! It’s like a homemade batch of granola baked on top of some yummy fruit.

Of course, we all have different opinions on what constitutes a healthy breakfast. 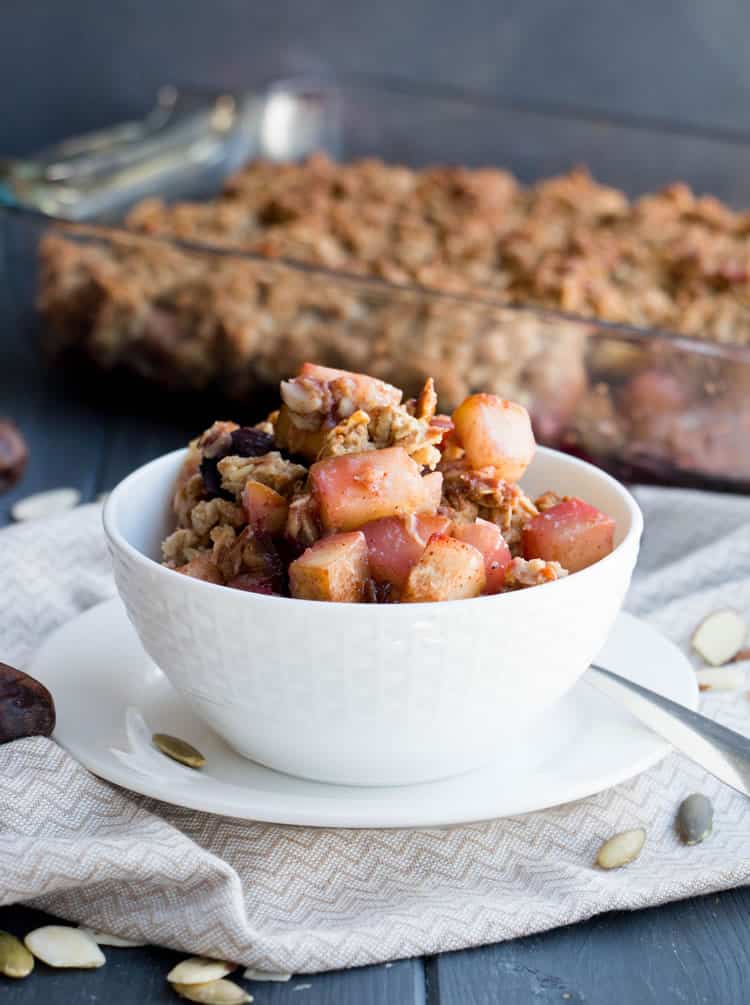 If you’re big on fruit and whole grains for your first meal of the day, then this is for you!

On the other hand, if you’re looking for a cozy winter dessert that’s lower on the guilt scale, then yep! This is for you, too!

I had a version of this dish at a friend’s house over the holidays. I was there when she made it so, of course, I watched as each ingredient went into the dish.

Then, I noticed she was using a recipe from a healthy cookbook. Great! I had had enough of holiday splurges, so a dessert that had less guilt attached was a welcomed sight. 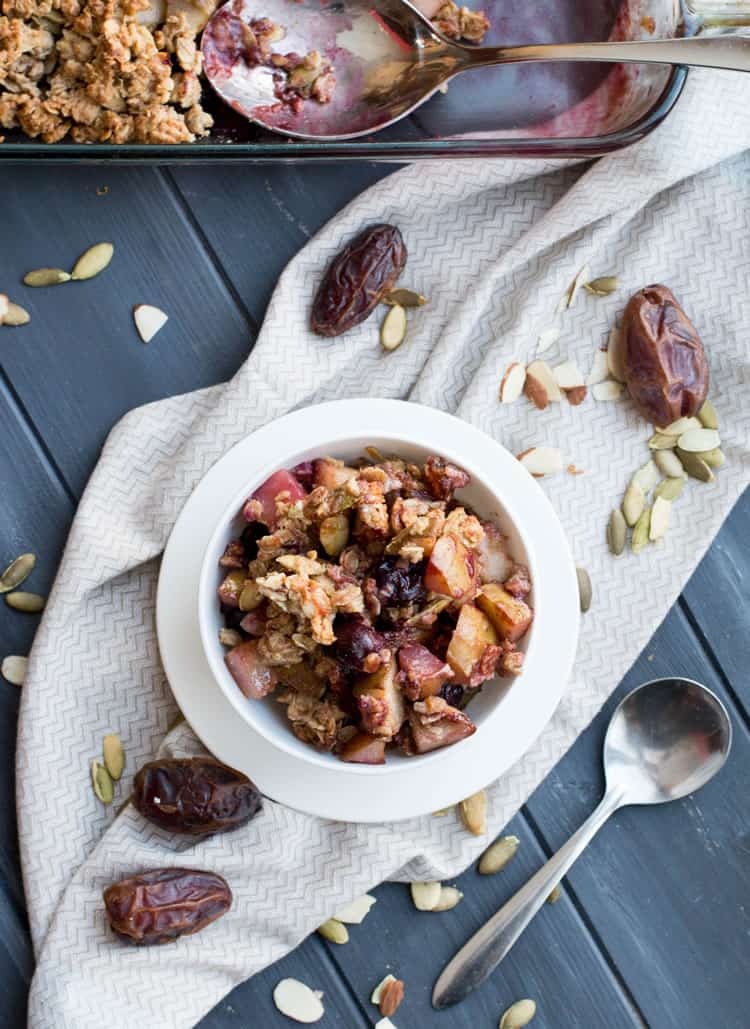 First, there’s no refined sugar! All the sweetness either comes naturally from the fruit, or from a small amount of pure maple syrup. I added a smattering of chopped dates for sweetness, but they are also rich in vitamins, minerals and fiber. 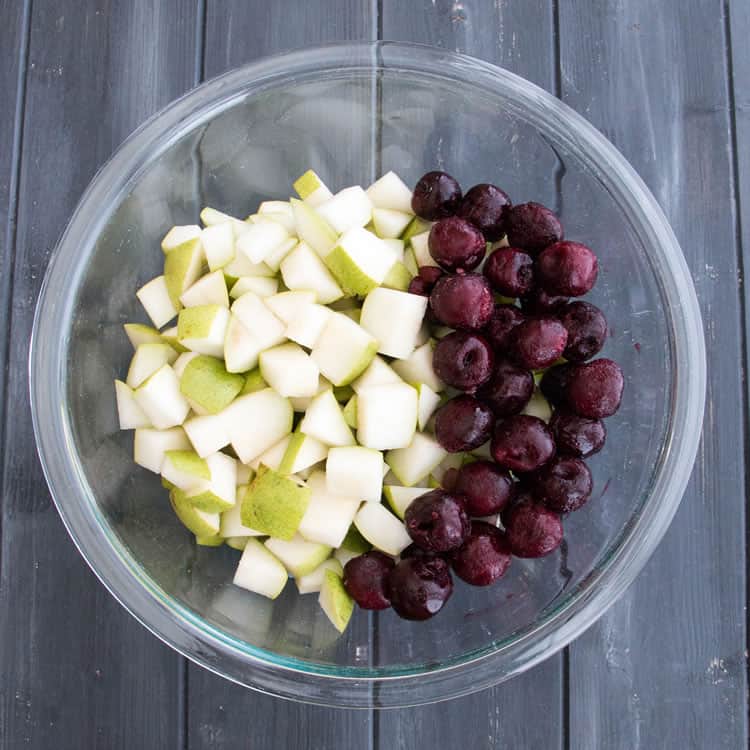 How about the almond flour? It’s low in carbohydrates, high in fiber and a high source of protein.

And the almonds themselves? They’re a rich source of vitamins and minerals and of course, they are a source of protein. 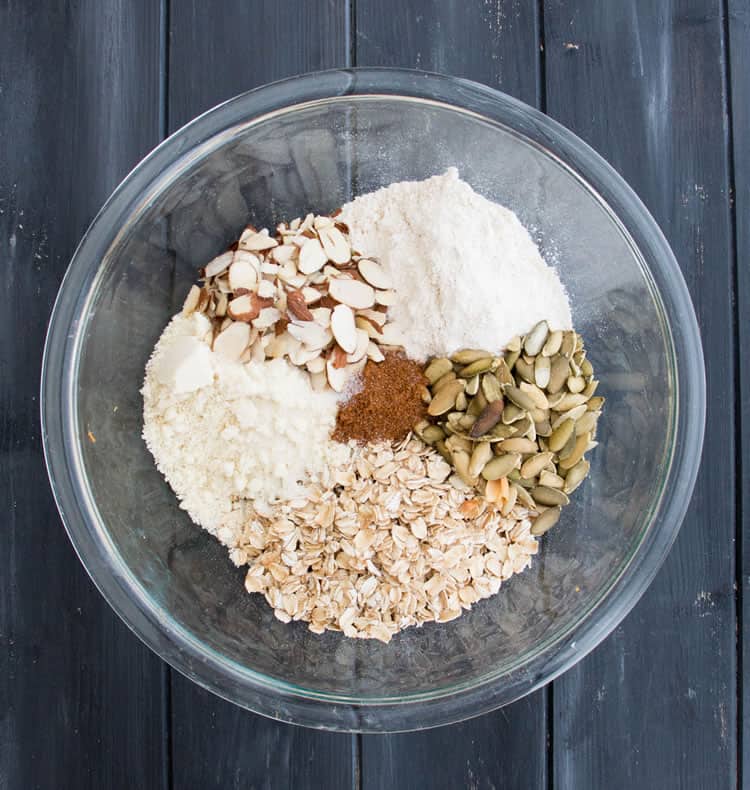 Finally, there’s the coconut oil and olive oil. The jury’s still out for me on coconut oil, but I’m a big proponent of olive oil. The original recipe used a combo and I decided to follow suit. Feel free to sub one for the other.

Bottom line? We loved it and I knew I had to make it again so that I could share it with you.

Oh and sweetness? It was plenty sweet for me and my family. Nobody missed a sugary, syrupy fruit filling or a sugar laden topping.

I love reducing sugar wherever possible. I often find that too much sugar masks the taste of the other ingredients in a dish. Some times it works, sometimes it doesn’t. Baking is a science, so every change has an affect to the overall outcome. 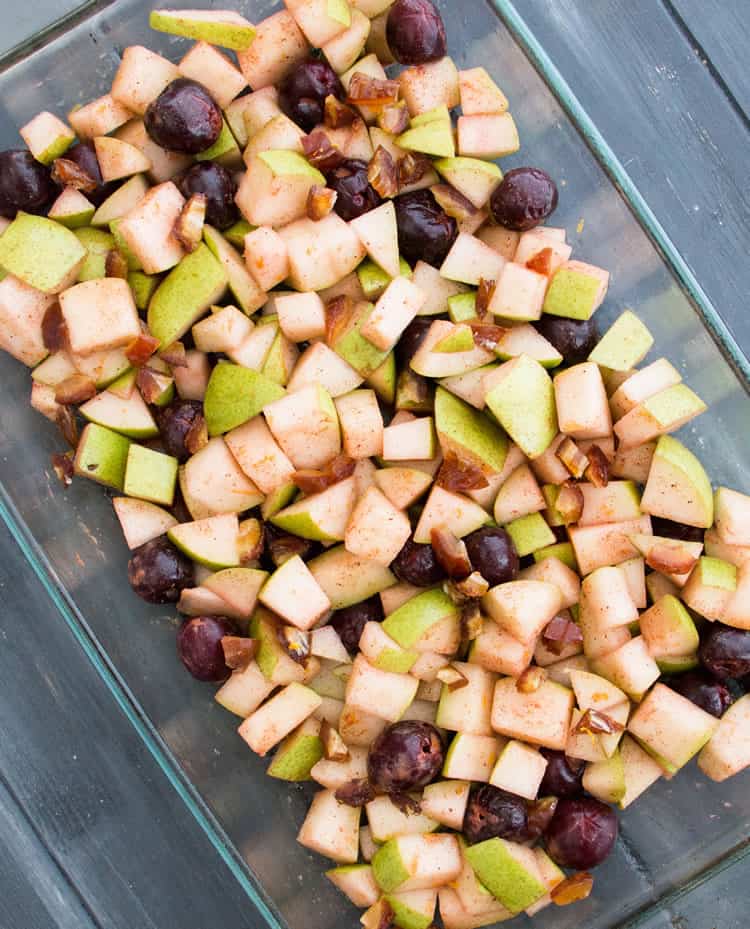 For instance, I reduced the sugar in Cinnamon Apple Cake and it brought out the taste of the apples.

I also recently tried cutting the sugar in half in my Fluffy Sweet Cornbread. That didn’t work. It changed the flavor, but it also changed the texture. In that particular recipe, there would have to be more adjustments made to the other ingredients to make it a reduction in sugar work well. 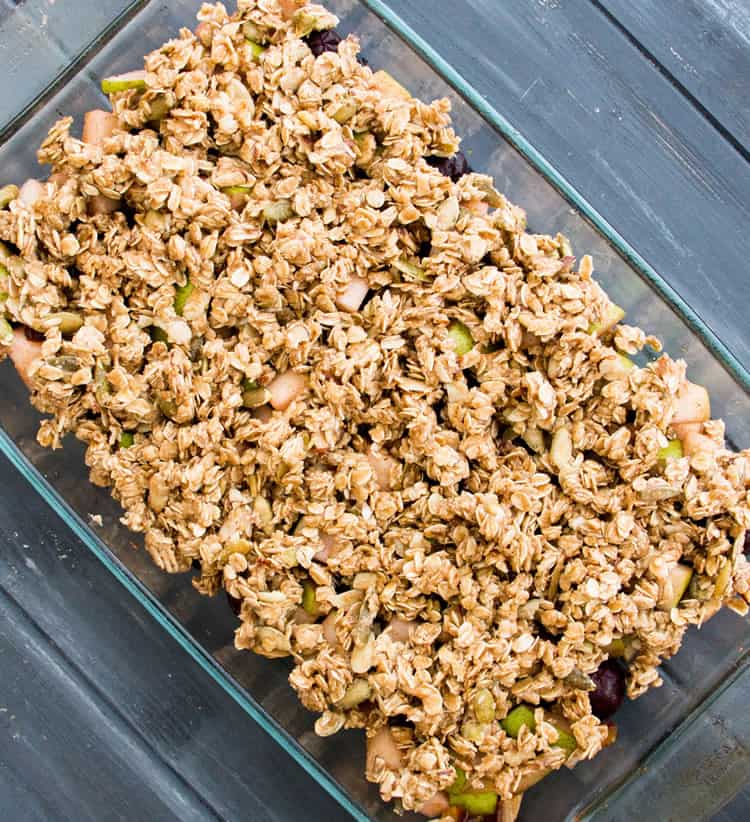 In this recipe, we’re not worried about leavening or the texture of a cake crumb; we have much more flexibility.

So, I had plans to make an entirely new version of it. Instead, I changed a few ingredients and some of the measurements and added a couple of new ingredients.

After all, I really loved the first one, I just wanted to make some adjustments. All of which came out just as I had hoped. I wanted to add a bit more moisture to the fruit and allow a bit more texture to the topping.

My friend made it with apples, though she said she had tried it with pears and it was much better. Okay. Pears it would be.

Except I didn’t peel them as the original recipe states. Why? Well, first….there’s nutrition and tons of fiber in the peels.

Second, if I can get out of peeling fruit, I will :) Third, there’s really no need to. The skins soften up beautifully while baking.

And finally, the green peel looked really pretty with the red cherries when I was mixing them up. 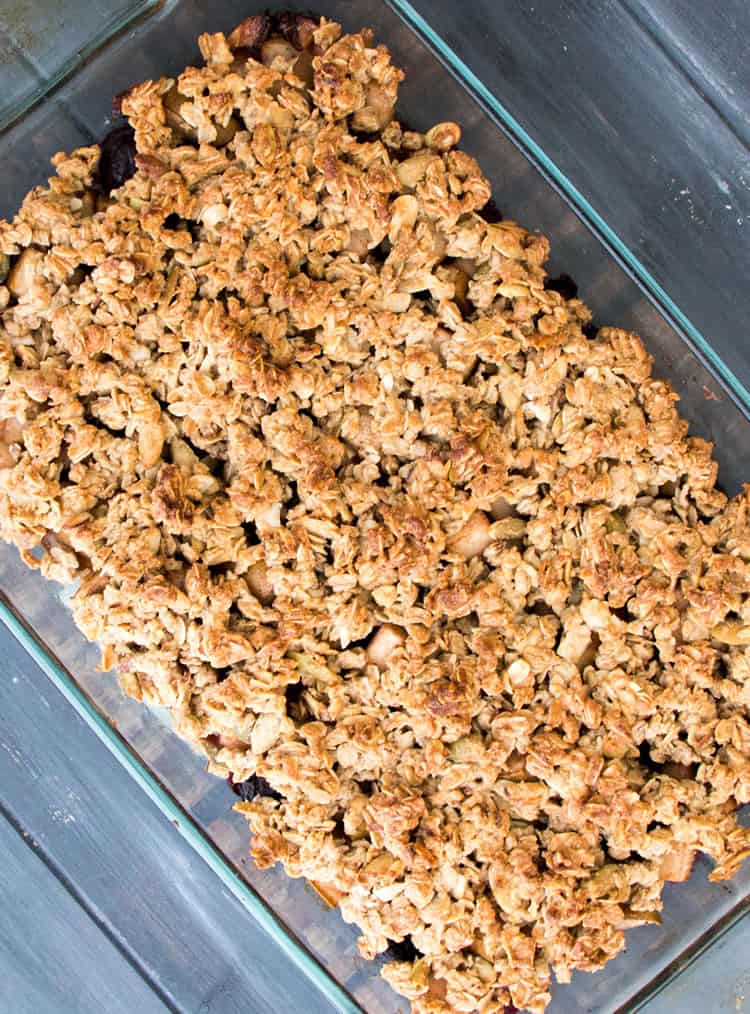 Then, I really thought I’d go with cranberries for the other fruit. Or, at least a mix of cranberries and cherries. But, I was afraid it would be too tart. Especially since there wouldn’t be any extra sweetness added to the fruit.

That and the cherries looked so good….I didn’t want to split their share with the cranberries. So I didn’t.

Of course, I still added 1 or 2 chopped dates for another shot of sweetness. Really, though. It wasn’t necessary. It’s good with the dates. I’m sure it would be fab without.

So, like any fruit crisp, just mix up the fruit, spice, juice, zest etc. 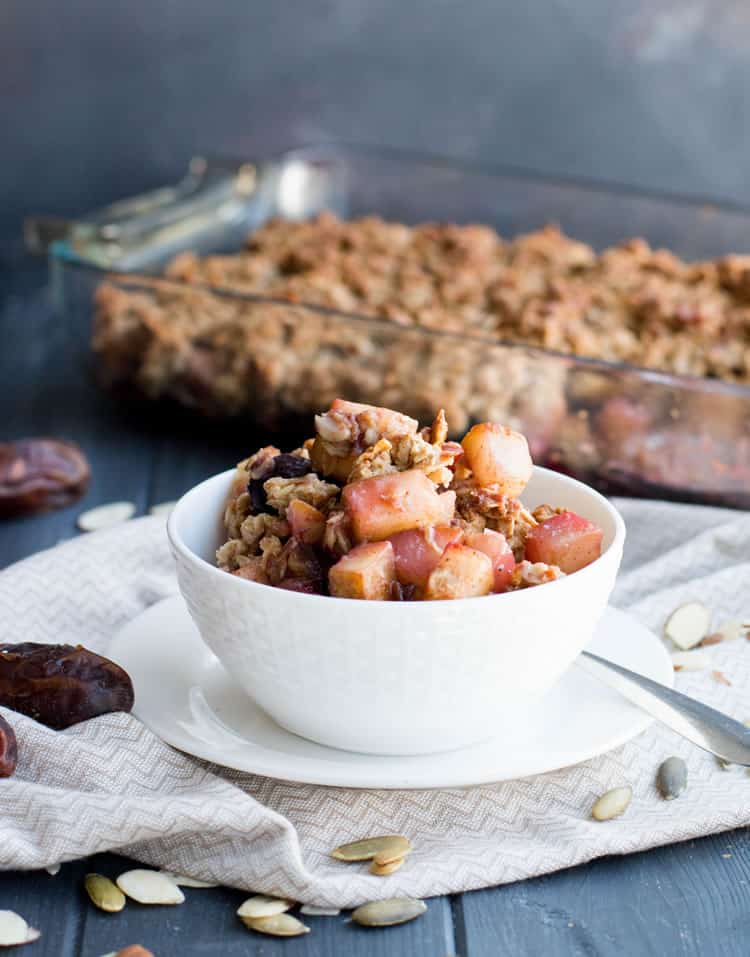 Spoon the fruit into a shallow baking dish. I did think for a minute that I would use a smaller and deeper baking dish. But, even though there’s all kinds of good stuff in this crisp, I knew a larger, shallow pan would help control the portions of that yummy crispy topping.

Trust me. There’s plenty of the topping to go around. This Healthy Winter Fruit Crisp isn’t like a really deep fruit crisp with a bit of topping. It’s kind of the other way around. Or, maybe it’s 50/50. In any case, it’s mighty tasty. 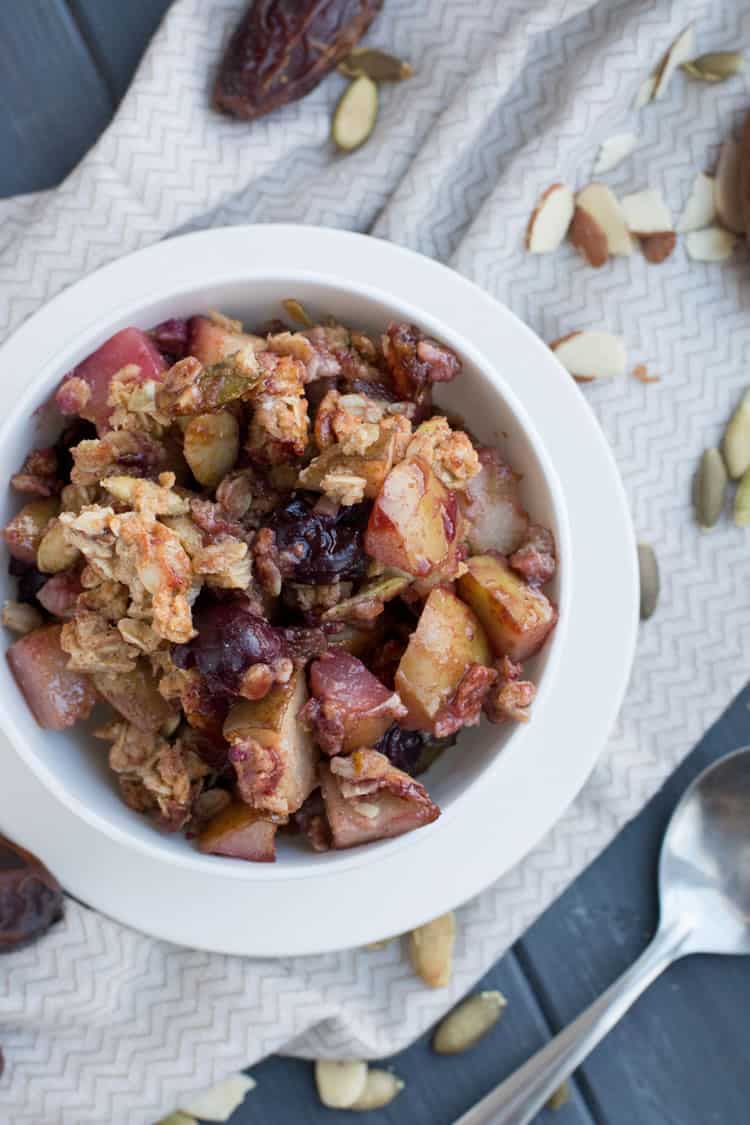 Either way, I think it’s a totally legit recipe for dessert or for breakfast. In fact, it makes a big pan, so yeah. We did both.

I presented my Healthy Winter Fruit Crisp as dessert one evening. And boom! The next morning, look at that! I served up little “warm granola fruit cups” as a side to breakfast.

Really. How often can you say you’ve done that with dessert? 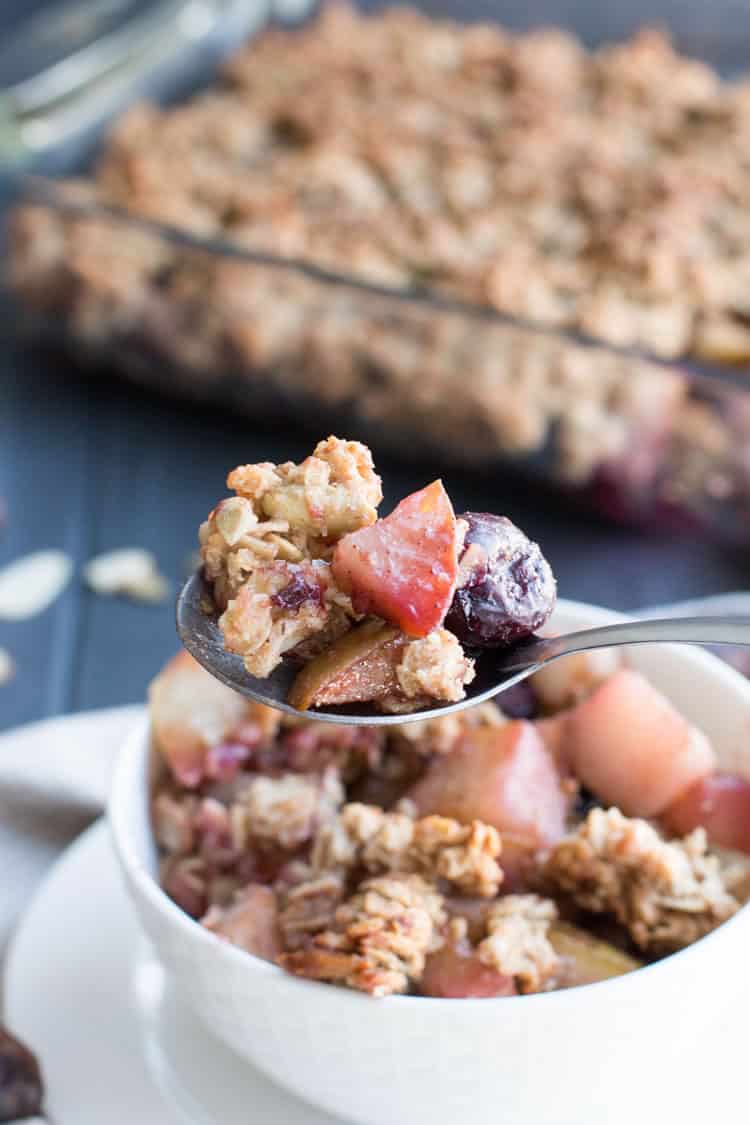 *It is not necessary to peel the pears, unless you prefer it. The skin softens adequately while baking. Use a firm pear, like Anjou or Bosc. Bartlett pears won't hold up as well to baking.

*Want a higher fruit to topping ratio? Go ahead and double the fruit mixture. Just make sure your baking pan can handle the extra volume.

*The dates are optional but add a little more sweetness to the filling since we're not adding any other sugars. To easily chop them, I cut them in half. Remove the pit. Then, I use a clean pair of of kitchen scissors that have been sprayed with cooking spray to cut the dates into smaller pieces.

*I always have disposable kitchen gloves on hand. You can definitely use a spoon, but I find it faster and easier to mix the topping ingredients with my gloved hands. Then, I can also use my hands to place the topping on the fruit. No mess. No sticky stuff under my nails.

*Feel free to use all coconut oil or all olive oil. I used refined coconut oil. One of the reasons is that it has a higher smoke point. I use a light olive oil for baking for that same reason as well as the milder flavor.

*I think this tastes best fresh out of the oven when the topping has a nice crunch to it. However, leftovers can be covered and stored in the refrigerator for up to 3 days. Reheat individual servings in the microwave. Still yummy, just not quite as crunchy.

Recipe adapted from Whole Cooking and Nutrition: An Everyday Superfoods Approach to Planning, Cooking and Eating with Diabetes.

All text and images are from The Merchant Baker Copyright © 2018

What could you use in place of orange zest?

Hi Sue, you can simply omit it. It just helps punch up the orange juice. You could really sub the orange juice and zest for whatever flavors you like...You could use apple cider or apple juice instead of the orange juice or do a bit of lemon zest or lime zest if you like those flavors. There's not a ton of added sugar in this recipe, so you just don't want to get too tart with your juice and zest unless you want to balance it with more sweetness. Bottom line, it will still be tasty without the orange zest. The orange juice alone will add some nice citrus flavor all by itself.