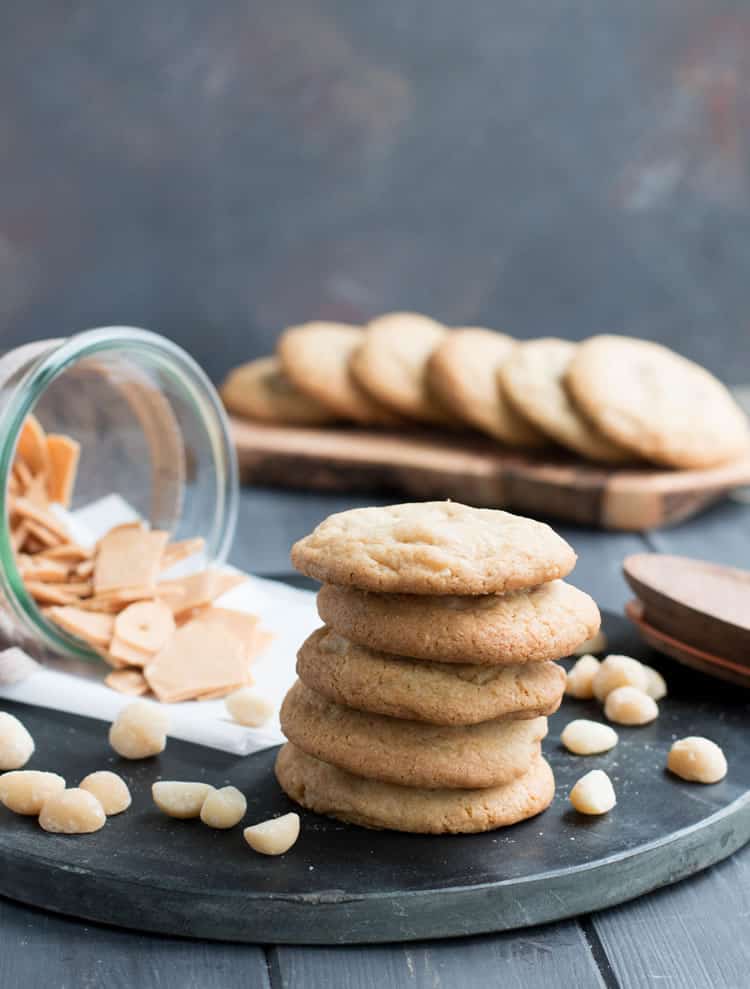 There’s so much I could have done with that Caramelized White Chocolate. I had so many ideas….

First, I thought, “Scones!” You know, because I always think scones :)

I definitely want to make bark with it, but I really think I’d like to post that during the holidays when we’re all making our cookie trays.

I thought about making something new and fun and fab with it. But, I was really craving the cookie that started my love for white chocolate. So, I pretty much decided I was going to go the cookie route.

For a heart beat I thought I would make ganache. That made sense since it was so incredibly creamy and glossy while I was spreading and smoothing it. 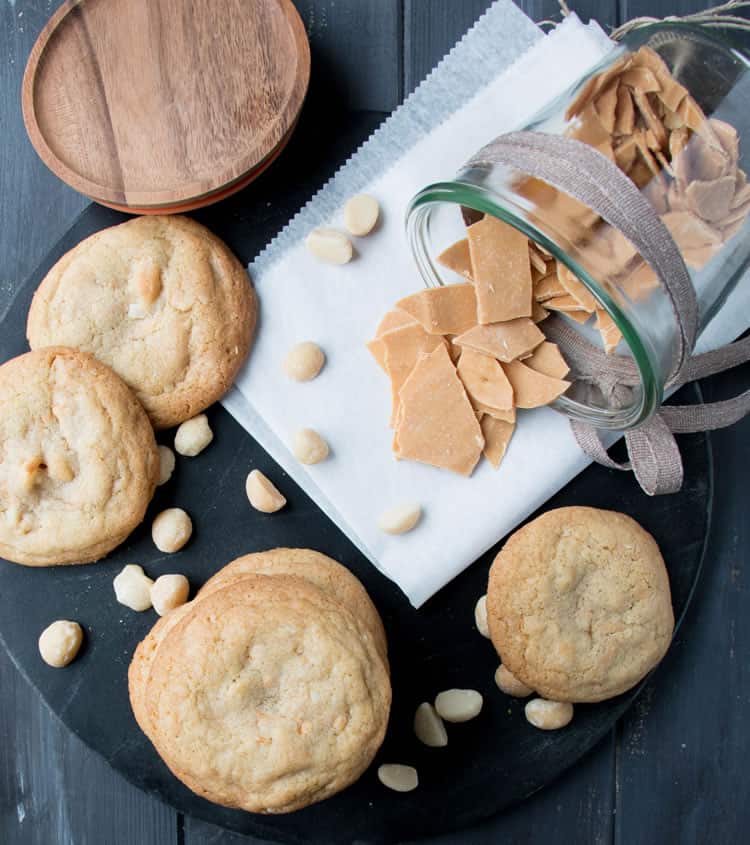 Ok. So the whole bunny cake story started with a lamb cake. You know those vintage lamb cake pans from yesteryear? Basically, it’s just a 3D pan of a sitting lamb.

When I was in high school, my job each Easter was to decorate the lamb cake. It wasn’t a hard job, by any means. Back then, we used a boxed cake mix and canned frosting. Easy to bake, easy to frost.

I would cover the lamb cake with the canned frosting and then pat sweetened coconut flakes all over it. The rest of the coconut flakes would be tinted green and spread around the base of the cake so that the lamb could sit in a nice bed of “grass.”

I cut some jelly beans in half for the eyes and nose. As far as the mouth, I can’t remember now if I used licorice or dyed icing. Maybe I didn’t give it a mouth. Hard to say. It’s been a millenia since then. 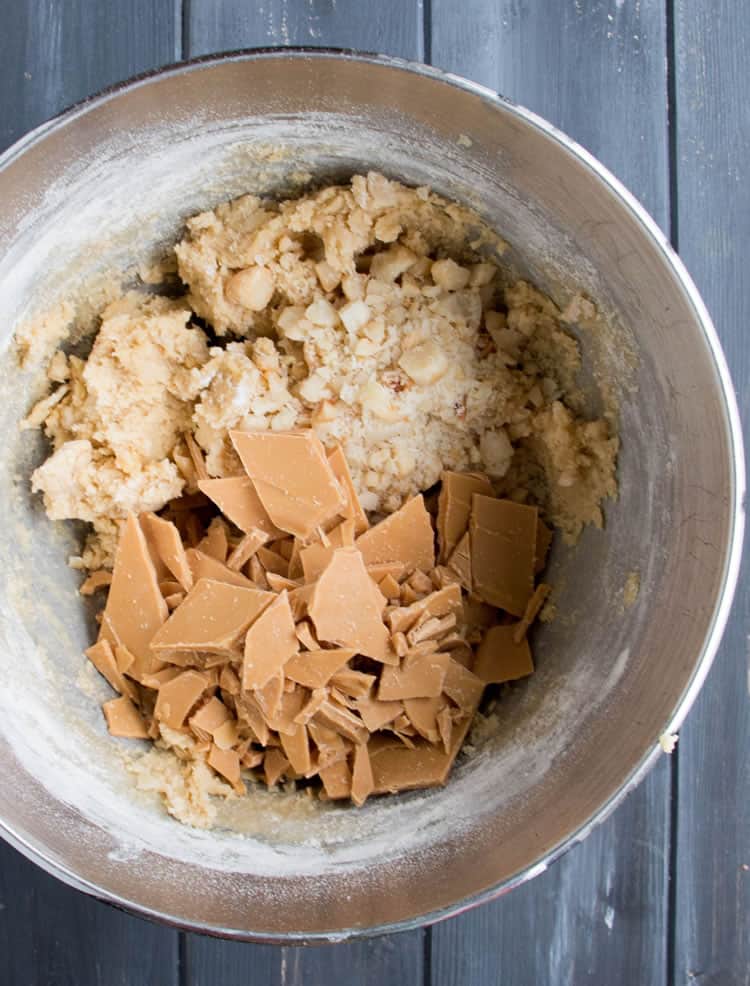 In any case, those of you who are familiar with lamb cakes know exactly what that cake looked like. It was a fluffy coconut covered lamb sitting in a pile of green coconut grass with a carefully placed jelly bean face.

I’m sure it looked like pretty much every other lamb cake out there back then, but I always felt a sense of pride when I was finished decorating it.

Well, when it came time to pass the old cake pan down, I called dibs. I figured I’d start the same tradition with my kids.

But we couldn’t find the pan. We looked high and low and the lamb pan was simply not to be found. So, I let the idea go. Well, sort of. I kept seeing the pans in stores and thought I should pick one up, but I never did.

But this Easter, I received a bunny cake pan in the mail with a note that said, “Send me a pic when you make it!” 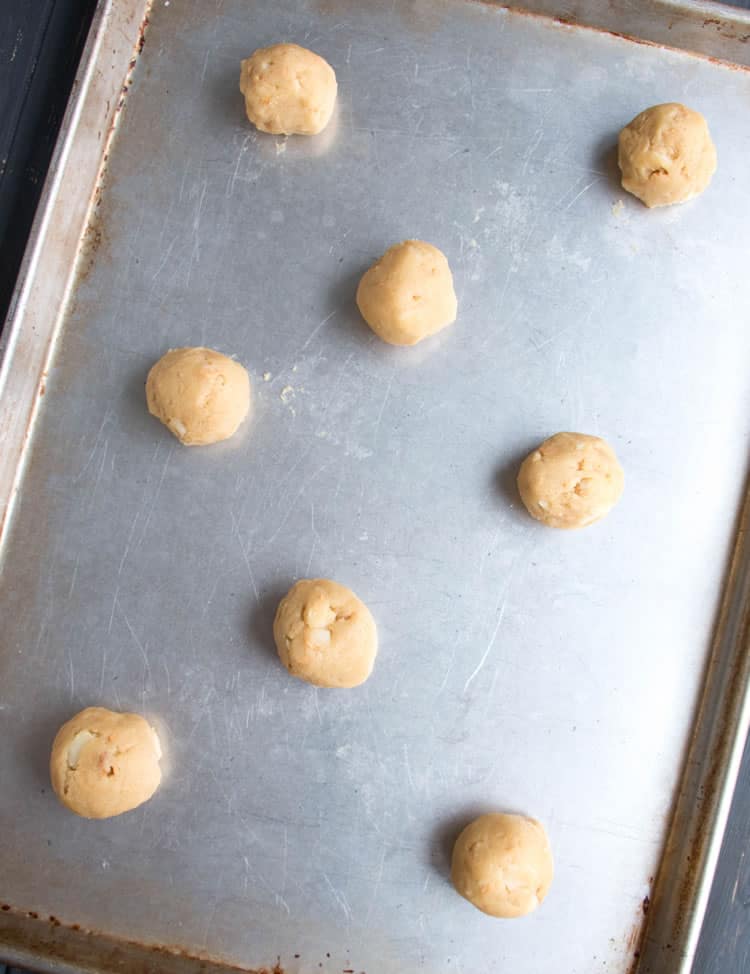 I wasn’t hosting Easter this year and had no need for a festive shaped cake, but I definitely wanted to experiment. So, no pressure except that I needed to take pics when I was done. Ok, a little pressure.

First I had to research cake recipes. How much batter goes into a bunny pan? What kind of cake works best?

I decided on pound cake. I found a recipe and cut it down to what I thought would be enough batter for the pan. In my research there were all kinds of tips and tricks for making sure that the cake came out of the pan without sticking.

Mine came out without issue. Good. Onto the next step. I sort of just wanted to shake some powdered sugar on it and serve it plain, because I wasn’t in the mood for a frosted cake. 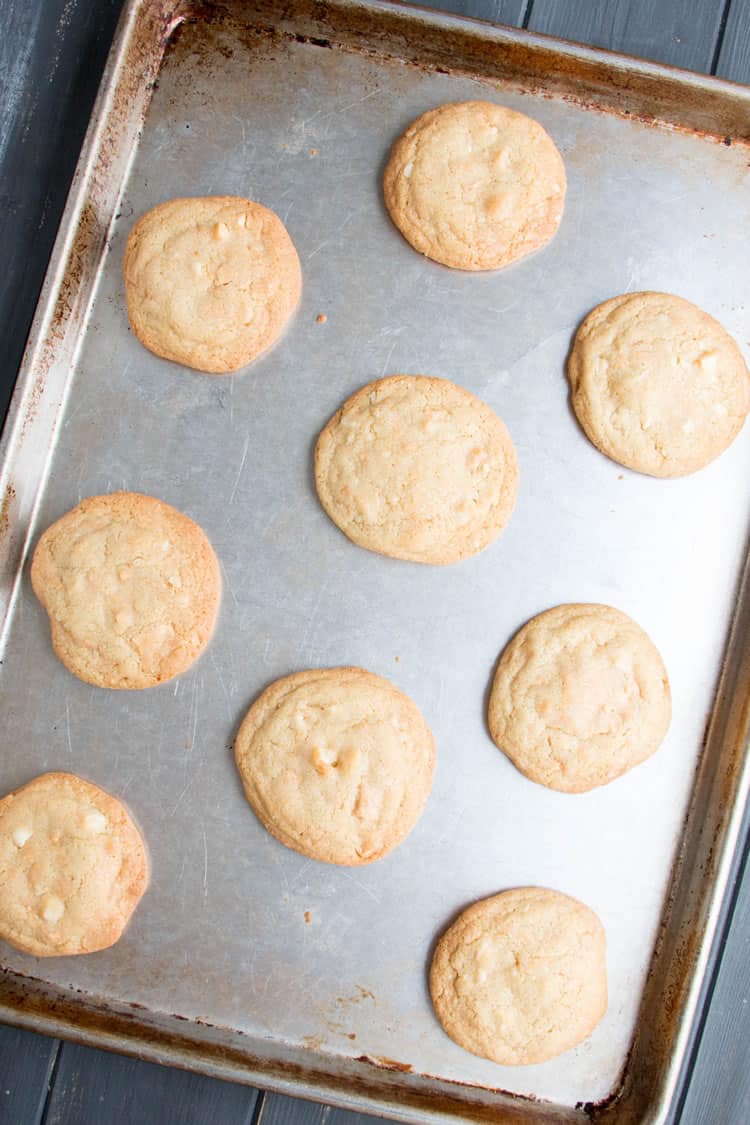 But then, how would we decorate it? I asked my family if they were good with a coconut covered cake.

Ugh, but we just had a coconut covered cake. I think the kids would have been fine with it, but my husband was not voting coconut. Oh, and no one was really up for decorating the cake. Really????

Fine. Since this was pound cake and I just wanted it to be simple, I made a glaze. My husband came out while I was mixing the glaze and asked how that was gonna work. I kind of figured it would work out like a glazed donut.

Of course, I was working with a 3D bunny. So the glaze was a bit of a disaster. Yeah, it was a mess. 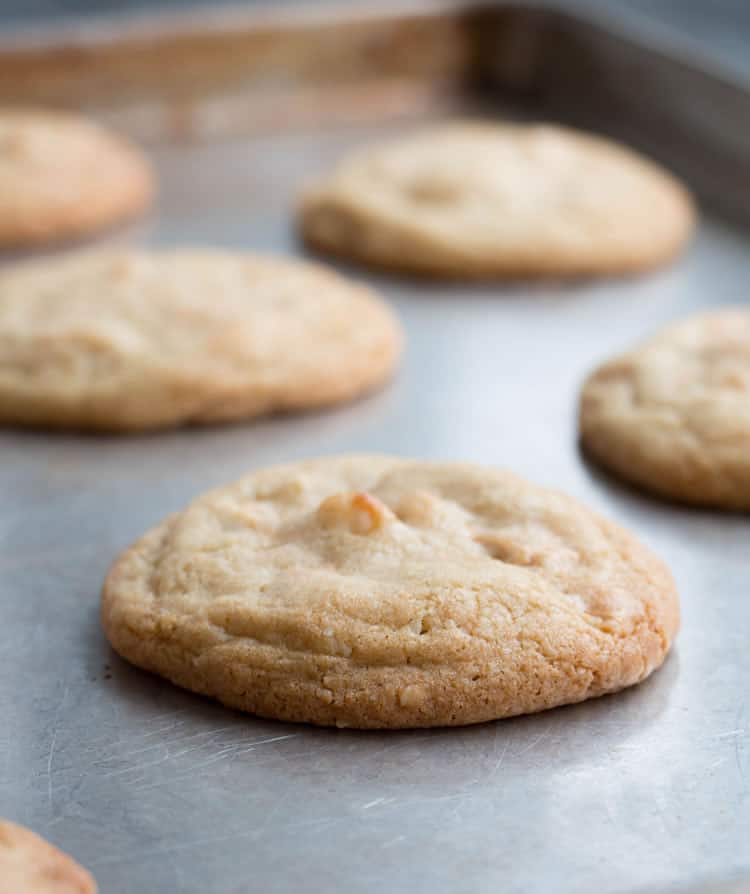 My daughter came out to the kitchen to comment on its sorry state. Of course, I was all, hey, you guys didn’t want coconut and I didn’t want frosting so here we are with a messy, drippy glaze.

I decided to “fix it” by grinding up some white chocolate in the food processor. Yep, I’m pretty sure I’ve told readers when they’ve asked, not to use a food processor to chop up chocolate, but I did it anyway.

I thought I could grind it up and stick it to the wet glaze and get some kind of texture for my bunny’s coat. But I ended up with white chocolate gravel. I tried sticking the chocolate to the glaze anyway because, well, you never know. It could’ve looked good…

My daughter watched like she was witnessing a traffic accident. “Mom, I don’t know how it’s possible, but you’re making it look both better and worse at the same time.” I had to laugh. She was right. 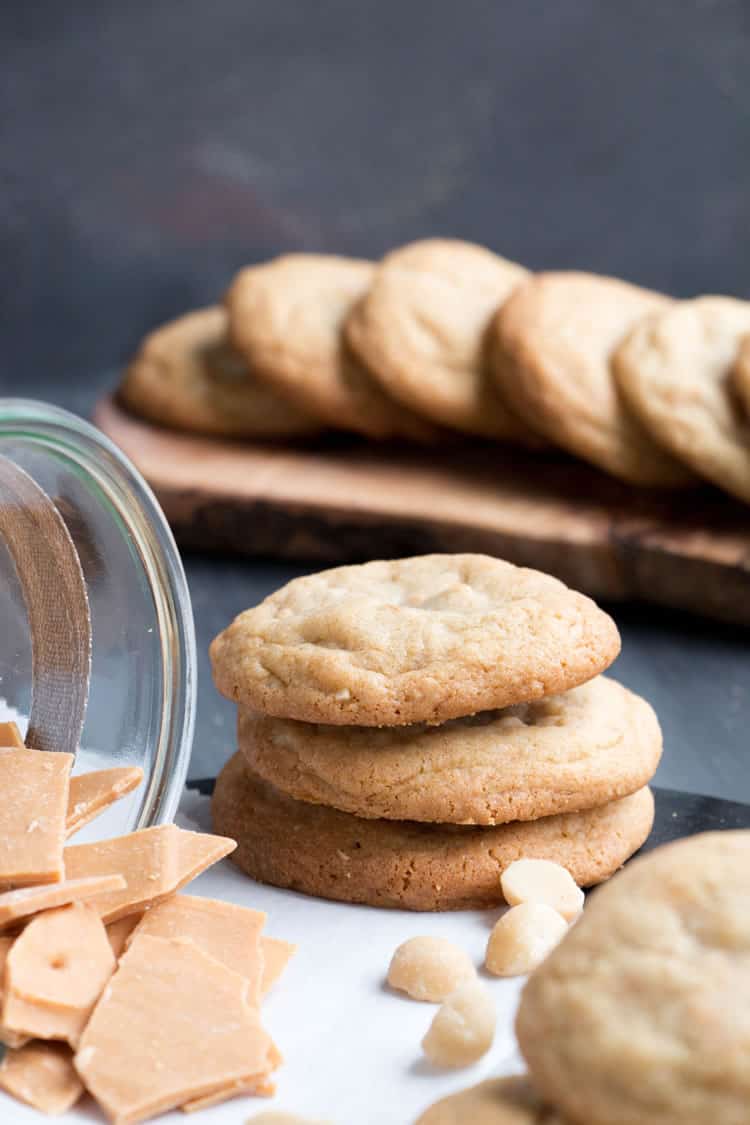 The rest of the family came out to see the disaster that was my bunny cake. I reminded them that frosting and coconut covers a multitude of sins, neither of which did we vote to use.

I, unlike my high school frosting and coconut cake decorating self, was working with a fairly naked bunny.

Well,  it was naked with drippy glaze and gravelly bits of white chocolate stuck to it. (And it was late at night, way past my bed time ;)

My daughter suggested that we simply tell our benevolent pan gifter that we didn’t get a chance to make the cake this year and we’d send pics next year. #neversaydie #notgonnalie

I was determined to make this bunny look at least presentable enough to take a photo without complete embarrassment.

The coat wasn’t going to be smooth, so I “embraced” a “textured” coat of chocolate.

Then, he needed some interest. I used a bit of food coloring to paint his ears pink.

I found some pearl sprinkles that I used to cover his tail. I picked pretty blue candy balls for his eyes and I tinted some coconut a pale green so that he would have a bed of “grass” to sit upon. 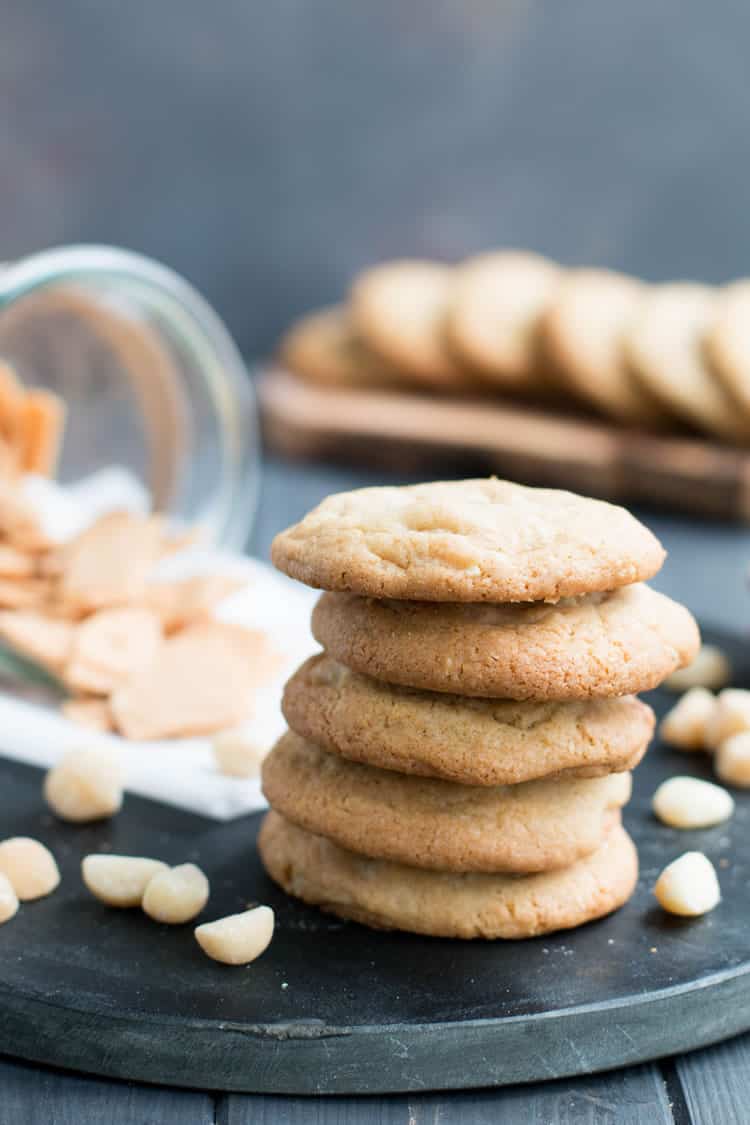 Of course, my husband came out and said, “I thought you weren’t going to use coconut.” I gave him the stink eye and he went away :)

When I was done, the bunny was presentable enough. Well, at least for us. He looked like a bunny and he looked a million times better than his drippy glaze, chocolate gravel stage.

I finished him off with some cake sparkles. A little bit of trick the eye, light reflecting glitter could only help, right?

I wouldn’t have presented it to anyone else, but I needed that photo. I dressed up his plate with some Easter eggs, took a photo and finally called the project, “Done.”

Thankfully, the cake tasted good, really good, actually. Well, I wouldn’t say it was so fab that I needed to post the recipe. It could still use some work, but it was a tasty cake, nonetheless. We certainly enjoyed it.

So that’s the long version of why I chose not to make ganache with the caramelized white chocolate. Caramelized White Chocolate ganache would be delish…but I’ll think about that sometime in the future.

Enough about cake. Let’s finally get back to these yummy cookies… 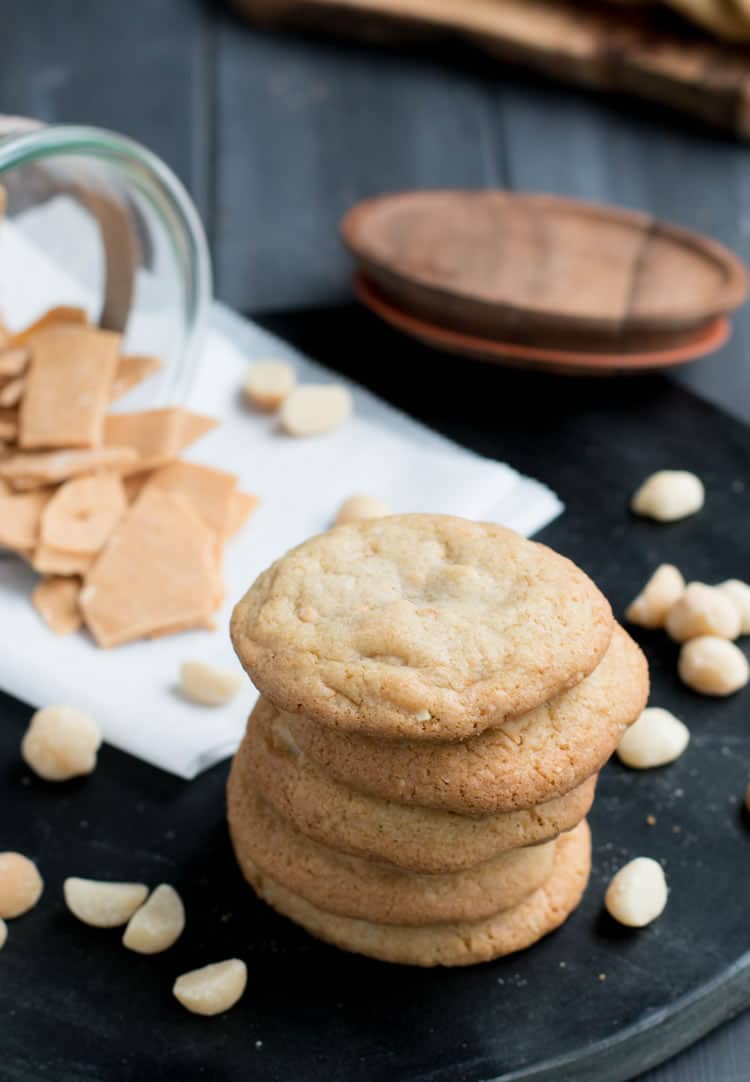 I guess I knew it was going to be cookies right from the start. I mean, I left my options open, but I think I just wanted to go back to the whole reason I started liking white chocolate to begin with, white chocolate macadamia nut cookies.

I decided to I would make a small batch. I took the recipe for Chewy Chocolate Chip Cookies and cut it in half.

Then, I reduced the sugar, much like I did with my Malted Chocolate Chip Cookies recipe. The caramelized white chocolate would add plenty of sweetness by itself. Reducing the sugar just a bit wouldn’t alter the texture too much.

But, I also wanted to add some softness and richness to the cookie and decided to add an egg yolk.

Salt balances sweet, so I used dry roasted and salted macadamia nuts. If your nuts aren’t salted, I would probably add another 1/4 teaspoon of salt to the dough.

I also chopped the nuts pretty coarsely for the cookie. I love nuts in cookies and I wanted these to be chunky.

But I didn’t want chunky chocolate for my Caramelized White Chocolate Macadamia Nut Cookies. That’s why I spread the chocolate thinly before it was set and chopped. I liked the “shards” of chocolate that resulted from that thin coating. 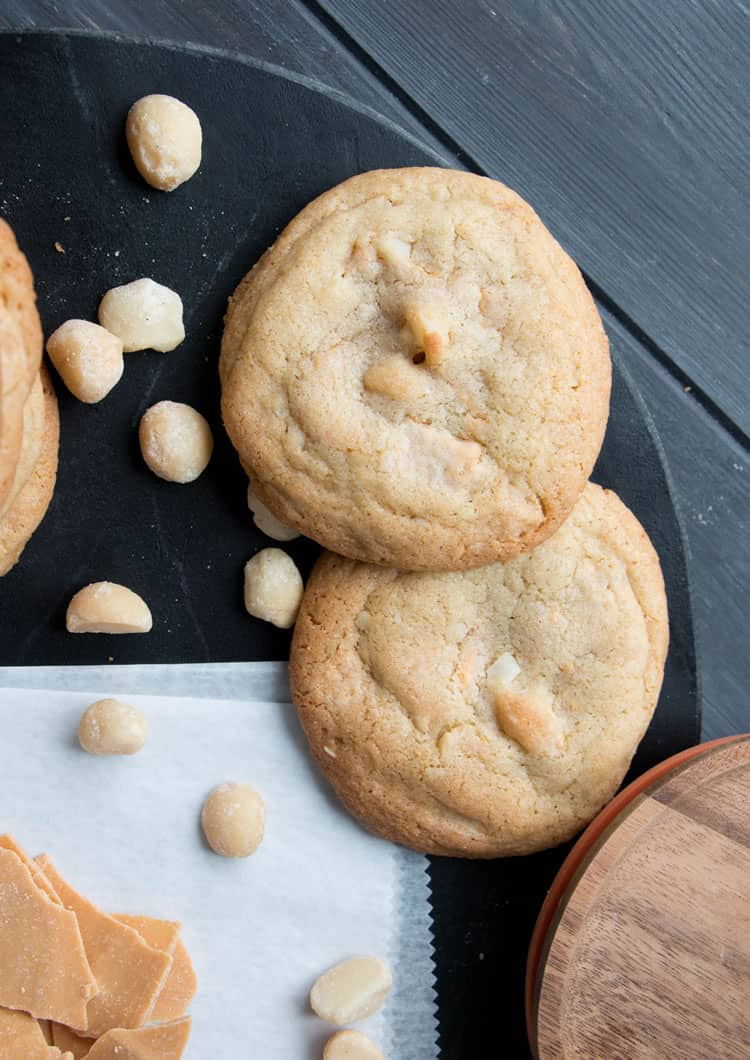 I knew that mixing in the shards of caramelized white chocolate would break them down. That’s why I left them in bigger pieces. I didn’t want them to completely break down, but I did want the flavor to flow throughout the entire cookie.

(I’m sure I would have loved a chunky chocolate version as well. If you want chunks, then cool your chocolate in a thicker slab and cut into desired sizes.)

Once the cookies are baked, you can see bits and bobs of the chocolate peeking through here and there. (The caramelized white chocolate is similar to the color of the cookie, so it doesn’t stand out as much.) 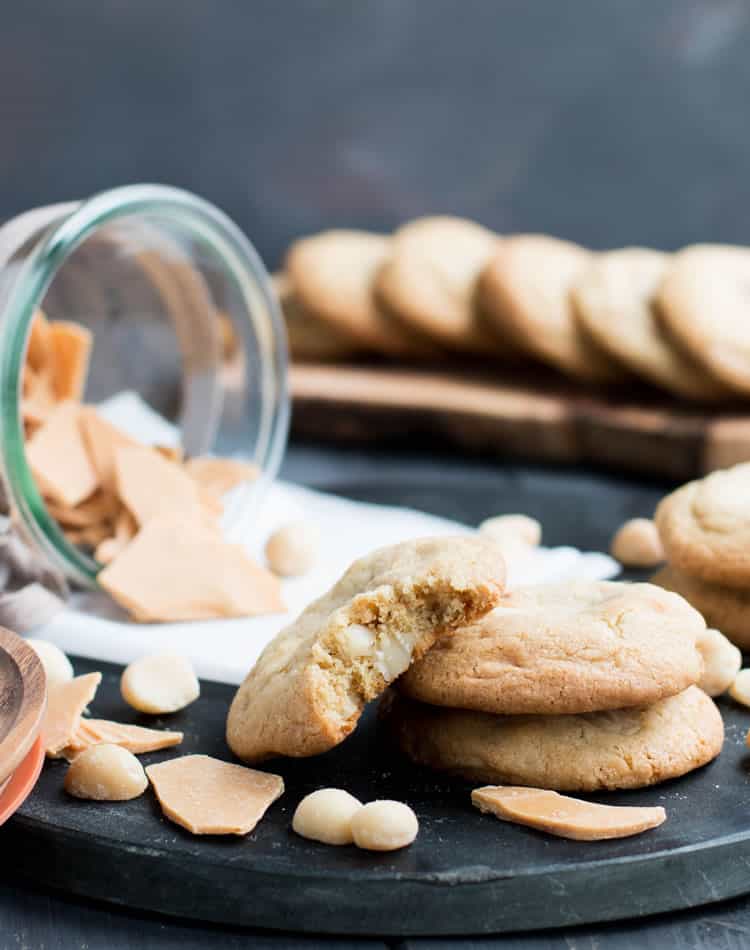 The cookie itself was soft and a little bit chewy. It had a delicious richness to it. I loved it! When you bite into it, you might have to look closely to see the bits of chocolate, but you will definitely taste them. Sooo good!

I was glad I went with cookies. I hadn’t had that kind of cookie in a while and it brought back some fond memories. Plus, c’mon. Caramelized White Chocolate Macadamia Nut Cookies? Who could say no to that?

A cookie who’s name starts with, “Caramelized,” has to intrigue most people, no? It certainly intrigued me.

Even though it might have been the most predictable route, it was a yummy one. Everyone loved them!

Oh, and the bunny cake? 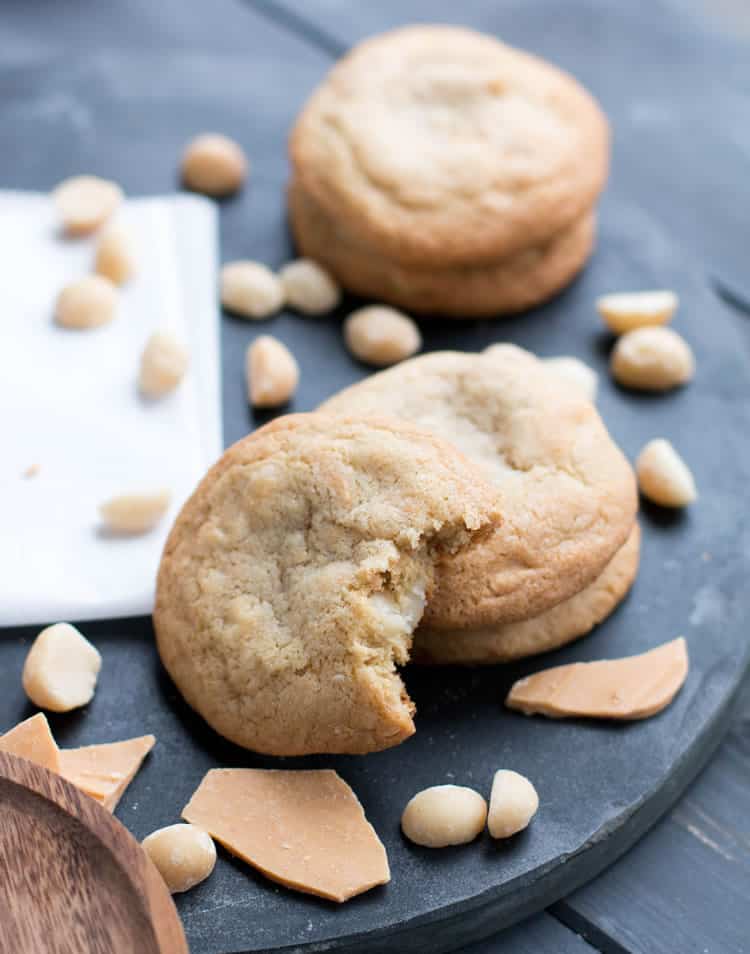 Next year, that dude’s getting covered in coconut! :)

*If your nuts are not salted, I would increase the salt in the recipe to 3/4 teaspoon.

*I used a little more than half of the caramelized chocolate that I made from the previous post's recipe. That recipe started with 8 ounces of chocolate. After roasting, it was closer to 7 ounces. You don't have to weigh it. Just use a bit more than half, or more, if desired. I thought the four ounces was plenty for me, because the chocolate is so sweet.

*My butter was cool room temperature. That means you can press it firmly with your finger and it will leave a clear indentation. This does matter to the texture of your cookie. If your butter is too soft, the cookies will spread quickly and be flatter than you might want them. If your dough ends up to be too soft, refrigerate it after it's mixed for about 30 minutes.