Now that we’re past the mid point of January, I think it’s high time we break out some chocolate…and some caramel…and some pecans… 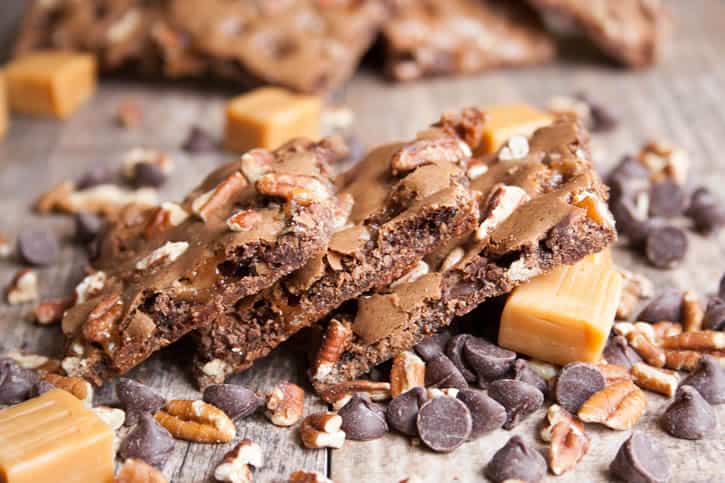 How about some Turtle Brownie Bark?  This is the latest iteration of the beloved Brownie Bark, that crispy, chewy thin yummy brownie treat.  Have you tried it yet?  Or perhaps Peppermint Brownie Bark was the one to win you over.  Maybe you haven’t even heard of it?  If not, definitely click over to the original post for all the delicious details.  (It was my first post on this blog!) 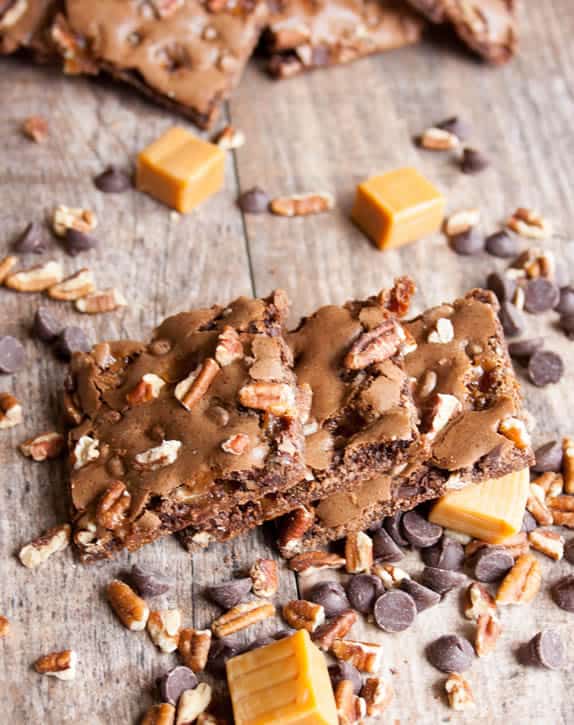 I decided to take one of my very favorite candies, chocolate turtles, and bring all that caramelly nutty goodness to this bark.  I kept it easy and used caramel candies you can buy.  I know a lot of people bake with these, but I don’t think I’ve had them since I was a kid.  I was a little nervous about using them.  I had planned to make the caramel from scratch, but one of the great things about this recipe is that it’s an easy one to whip up.  And, a lot of people aren’t really “into” making their own caramel.  So, I decided to go with the short cut and keep it easy. 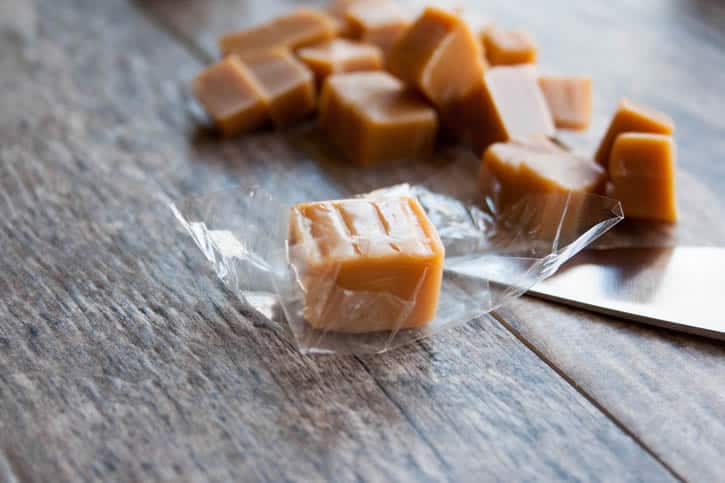 I was afraid the caramel would come out rock hard after baking in the oven, but I dutifully unwrapped each little candy, chopped it up in small pieces and proceeded with my fingers crossed.  I did look for the little caramel bits you can buy to avoid all the unwrapping and chopping, but I didn’t see them in the stores I checked.  I actually had to go to a few stores to find the caramels, which I thought were kind of a basic item. 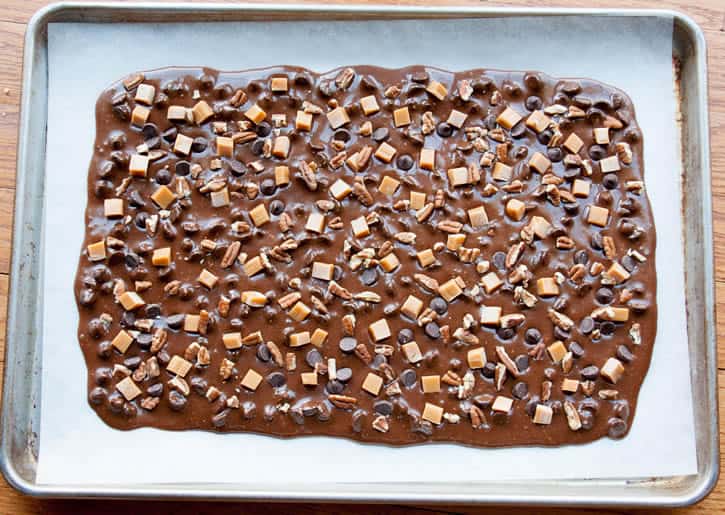 So I bought them, and brought them home.  My son asked me three times if he could have some of the caramels and each time he asked, I gave him the same answer. (As soon as I figured out how much I needed for the recipe, he could have some.)  Somewhere along the line he got into them before I gave him the go ahead, and, let’s just say he had more than one.  Since I still hadn’t started the recipe and wasn’t sure how many I needed, another trip was made to the store to get caramels.  The funny thing is I only used 10 pieces anyway, so I didn’t need the second bag (which has now been hidden away from prying hands :) 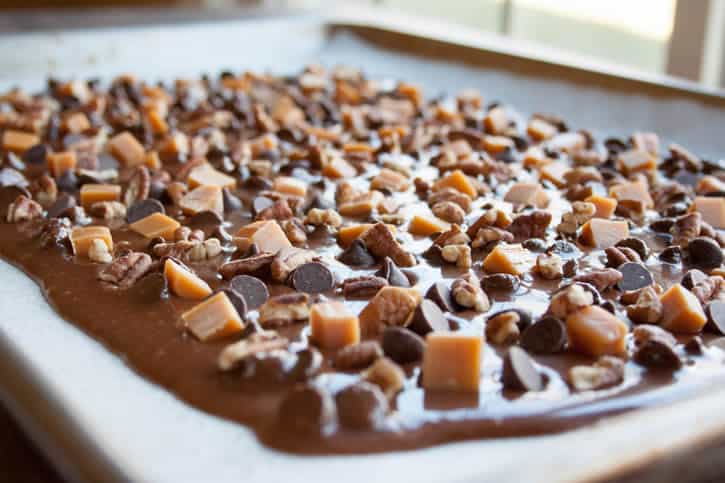 For the pecans, I used raw pieces.  I was going to toast them, but since they sit on top of the batter, they end up toasting nicely in the oven.  Another time saver. 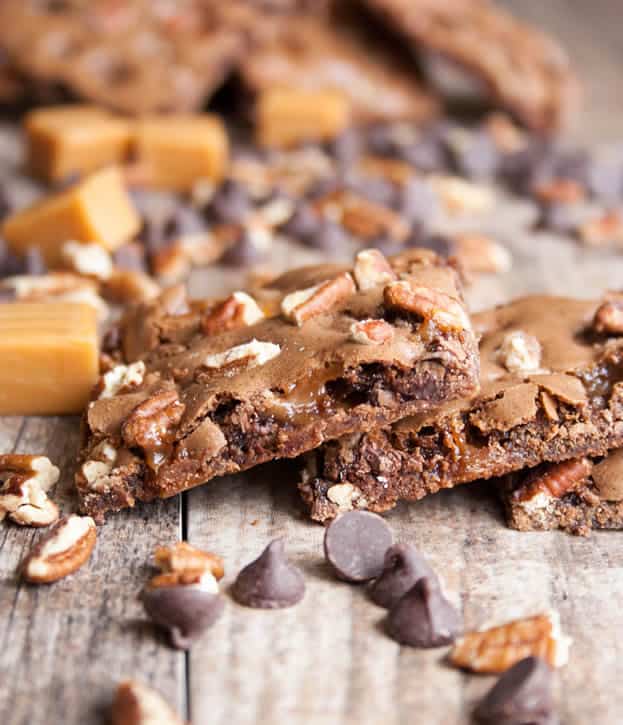 Once all the toppings were evenly distributed, I popped the tray in the oven and crossed my fingers.  I’m sure those of you who use these caramels all the time are thinking there’s not going to be a problem, but after making a failed caramel pretzel bark this past Christmas that could seriously damage your dental work, I was feeling less than confident.  Would the caramel harden?  Would the nuts burn? And, slightly off topic… what the heck I’m I going to do with the extra bag of caramels??? (I know my son has an answer for that question :) 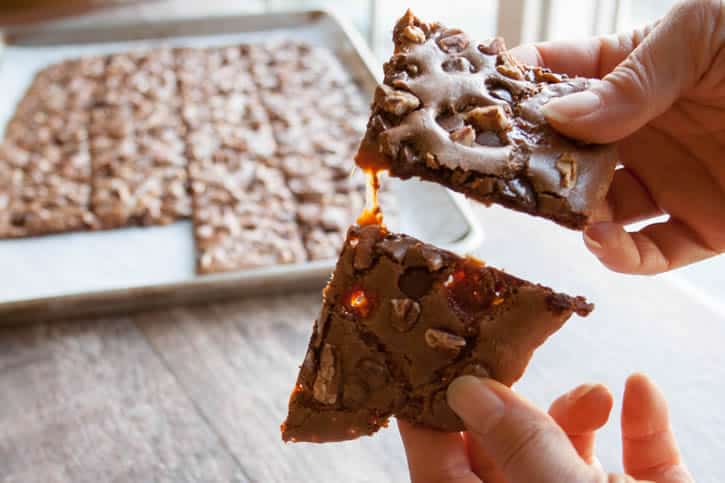 I needn’t have worried.  The bark came out crispy and chewy as it always does, the nuts were perfectly toasted and the caramel was just chewy enough to work with the crispy, chocolaty, chewy brownie.  I’m going to add Turtle Brownie Bark to the “win” column. Now I’m three for three on Brownie Bark.  This is the most addictive one yet. I think it’s time for you to jump in and try some. 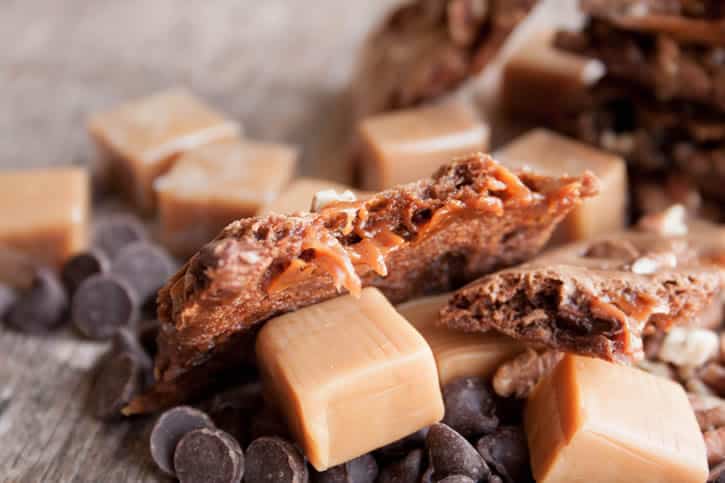 I have been obsessed with trying out 'bark' recipes lately. This looks like a really yummy twist on it!

I love it because it's not a candy bark...but a nice satisfying chewy thin brownie...

Jen and Emily @ Layers of Happiness

Woah! I never knew you could make this stuff at home! GAH. This could be dangerous - but also completely delicious! :)

It's really easy to make at home! And I like this better than the Brownie Brittle they sell in stores because it's crispy AND chewy, instead of just crispy.

This turtle brownie bark looks AMAZING. Seriously I have no words.. chocolate, espresso, caramel and pecans is such a delicious combination.

Thanks, Thalia! It's really, really good...lots of flavor and a chewy satisfying texture...

Looks like all the things I love all put together....

You just can't go wrong with chocolate, caramel and nuts, can you? :)