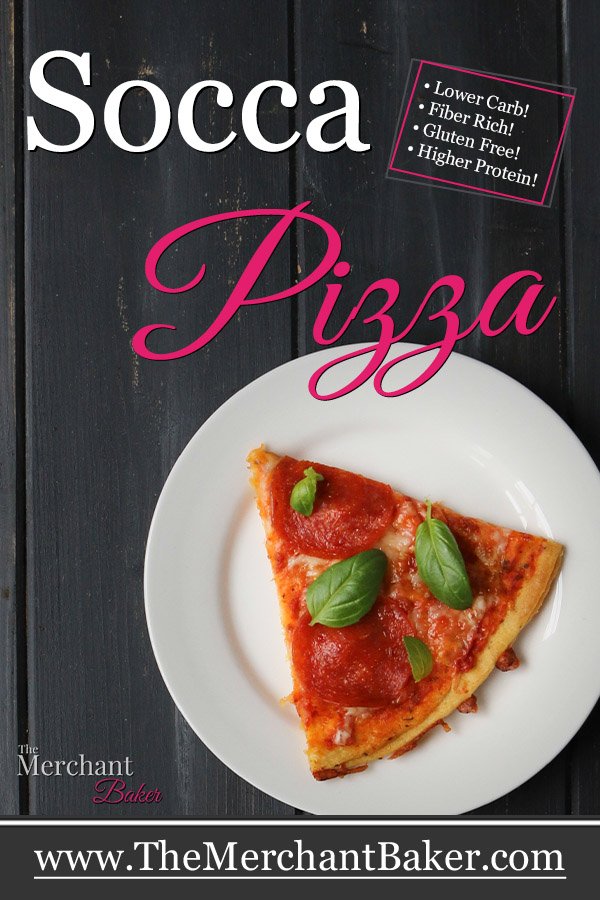 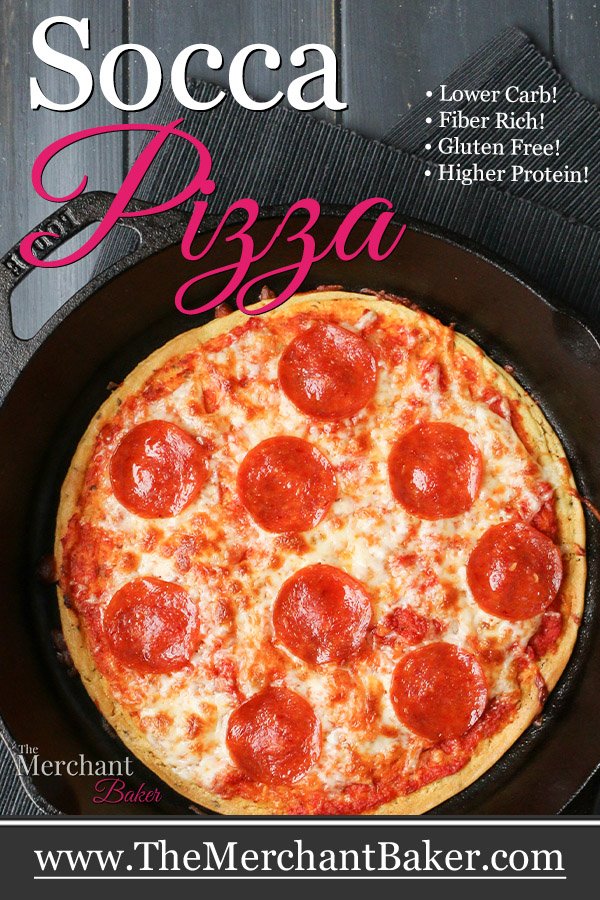 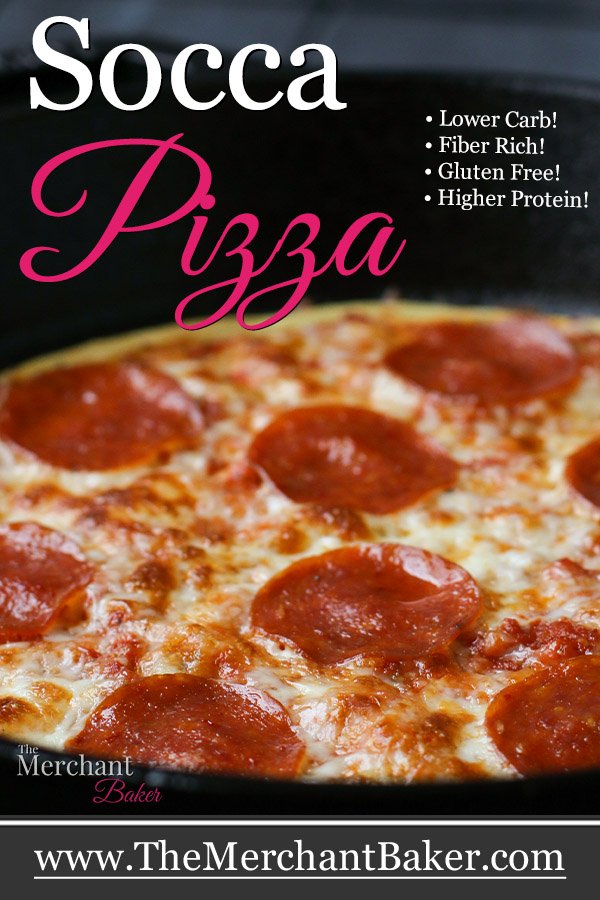 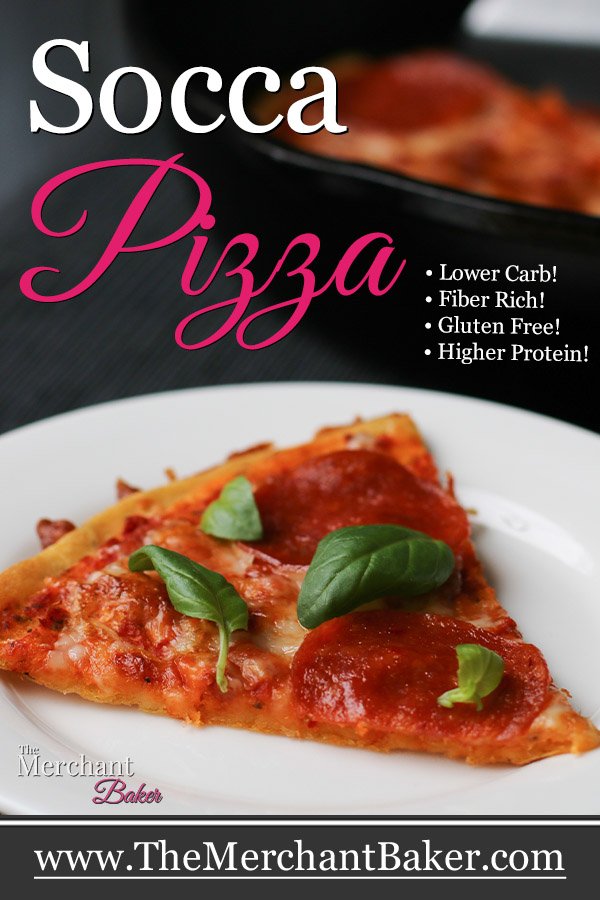 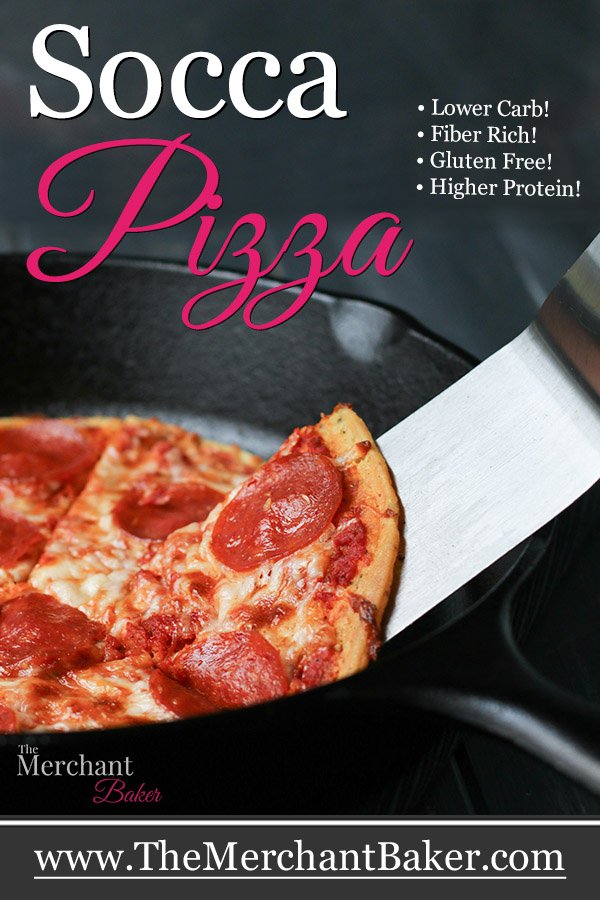 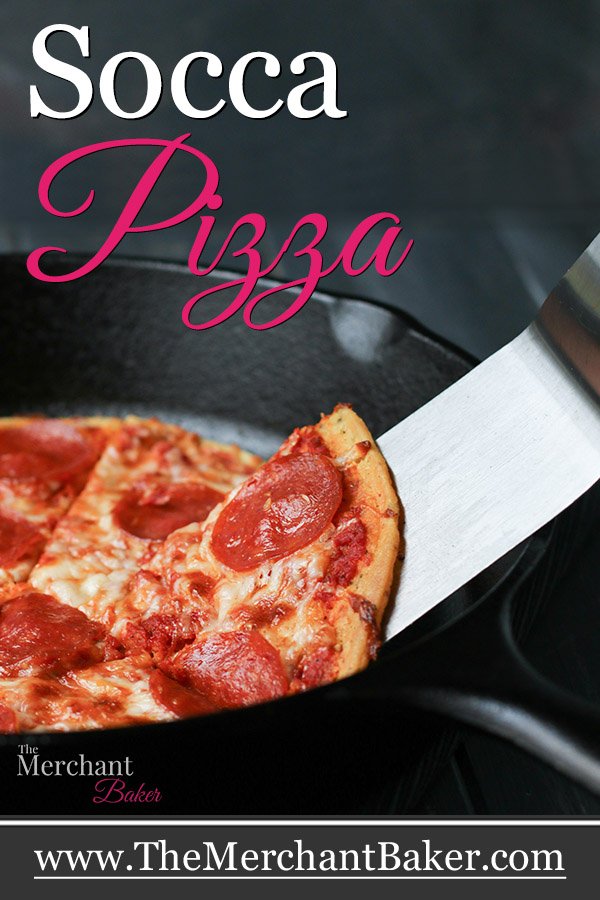 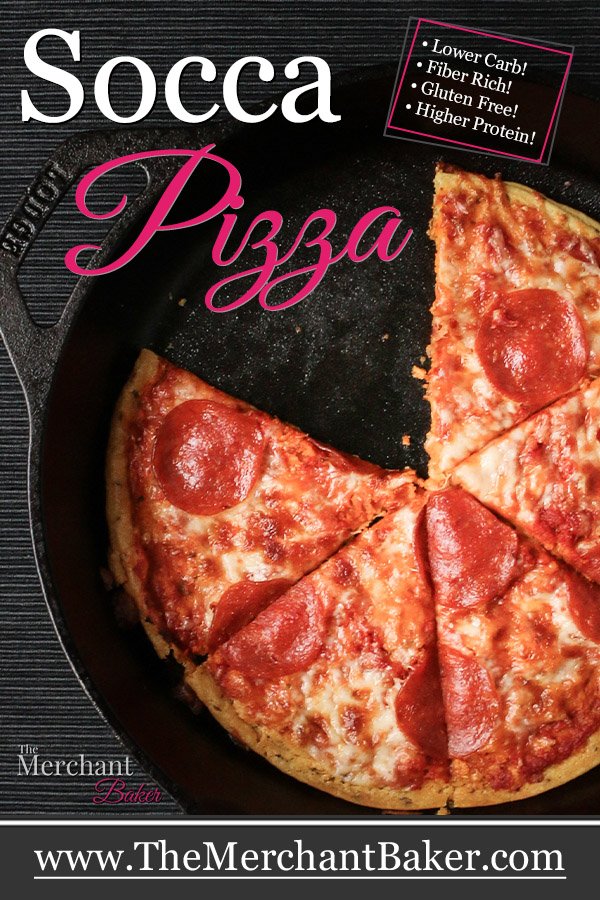 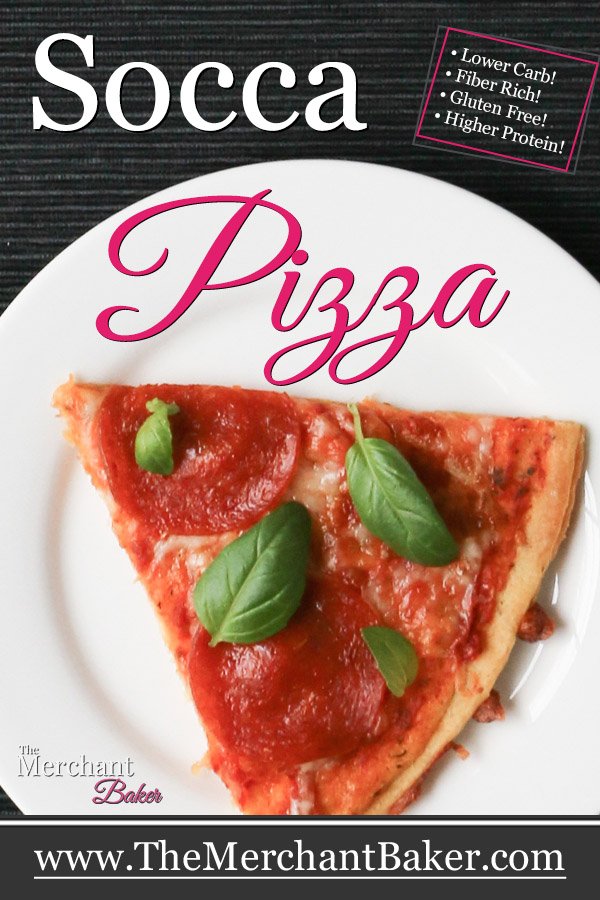 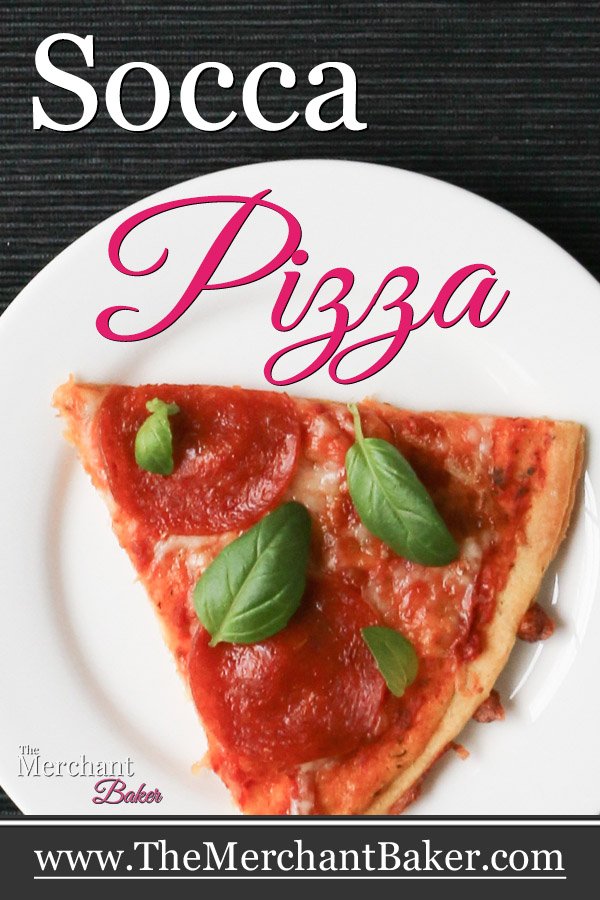 Socca pizza is a quick and delicious lower carb pizza option using socca, or farinata as its crust. This chickpea flour crust comes together with just a few ingredients, is fiber rich, higher in protein than wheat flour and naturally gluten free. Make a traditional pizza with mozzarella and pepperoni or top your crust with your favorite toppings.

Well, well, well. Here we are in a new decade. No doubt your inbox is flooded with healthy recipe ideas and ways to start this new year “right.”

I’ve already been experimenting with a new baked oatmeal to add to our healthy make ahead breakfast arsenal. It still needs a few more tests, so we’ll see how that works out.

I was quite confident while making it and made a really large batch; I’m grateful my family is supporting this endeavor since they’re going to be eating it all week :)

Of course, you know my Baked Banana Oatmeal Cups are already a long time favorite and one of the most popular posts on this site. I love baked oatmeal because it hearty and is a great make ahead option. 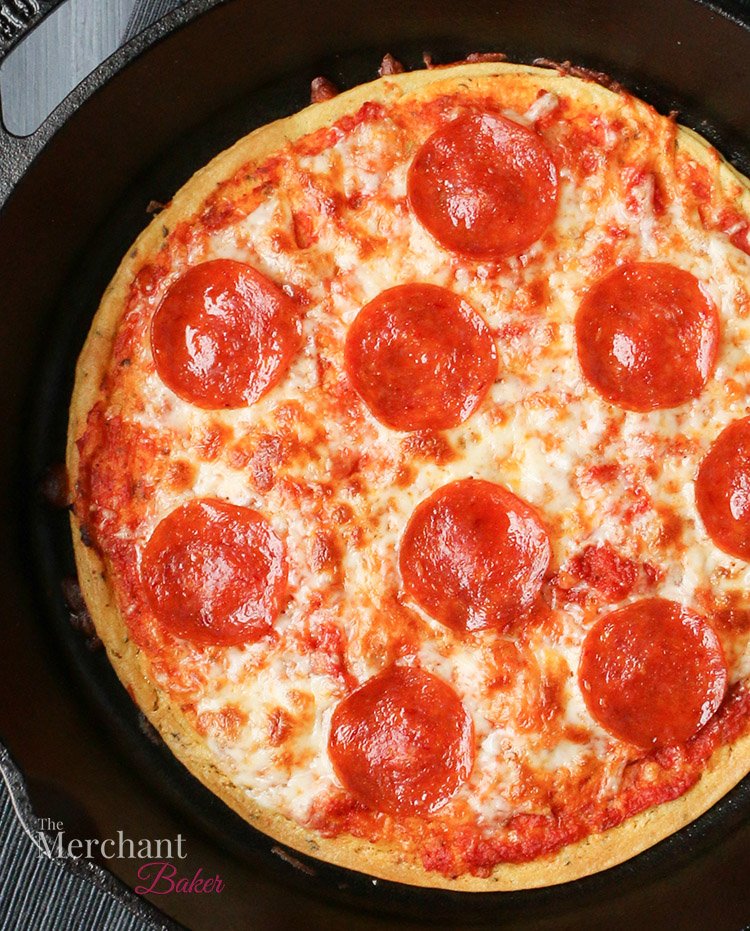 But, we’re not talking about oatmeal this fine January day. Instead I decided to start the year off with pizza.

I know. Maybe you were expecting a nice Kiwi Berry Spinach Salad or some Spinach Feta Egg White Cups?

But pizza? Why not? I mean, it’s not like I’m placing a big ole’ stuffed crust pan pizza before you with a thick layer of cheese and a ton of toppings….

This pizza may look like a splurge, but it comes with some healthy benefits. I’d like to consider it a soft landing into an otherwise high pressure, resolution laden January.

So, what’s so special about this fun personal pan pizza? Well, it’s all about the socca crust. 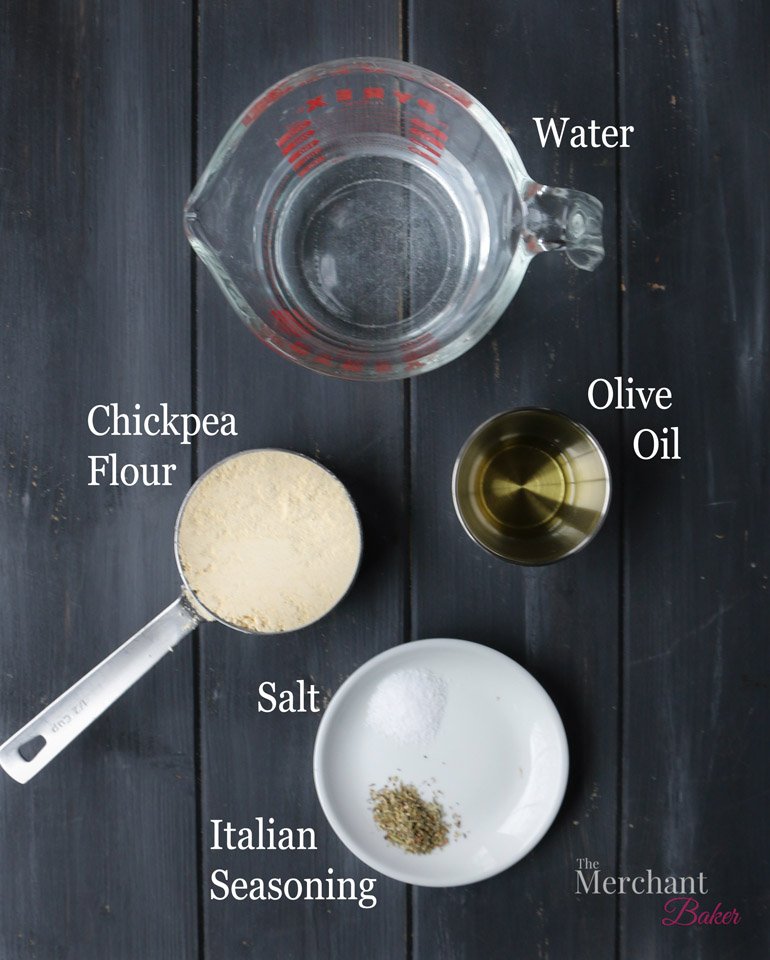 Socca is a French unleavened pancake made from chickpea flour. It is also known as farinata in Italy.

For our purposes today, socca is one of the quickest flatbreads you can make, coming together quickly with just a few ingredients.

I discovered socca last year and had been making it for a few months as a quick bread to serve with soups and chili. One day, it occured to me that it would make a great pizza crust.

Yep, for a minute there I got excited and thought I had invented a whole new idea for pizza crust. Chalk it up to my excitement over this easy to make “bread.”

Alas, I did not invent socca pizza, but hey, it was new to me and new to my family. And, just maybe, it will be new to you.

This post contains some affiliate links. We are a participant in the Amazon Services LLC Associates Program, an affiliate advertising program designed to provide a means for us to earn fees by linking to Amazon.com and affiliated sites. 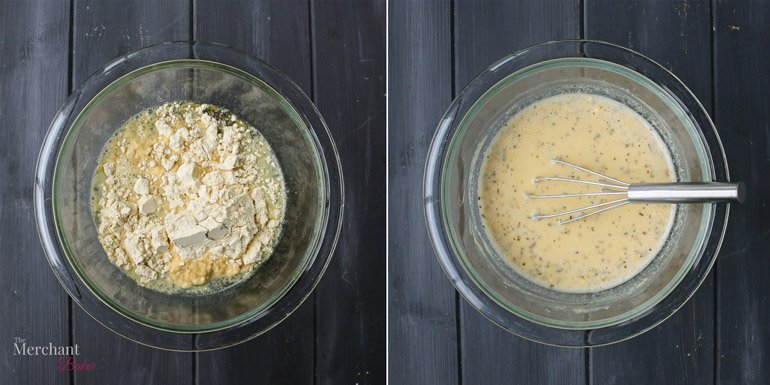 Low carb is relative depending on your dietary needs. The chickpea flour I use has 36 grams of carbs in 1/2 cup with 16 grams of fiber. So, we’re talking 20 net carbs for my 10″ pizza crust.

If you’re looking for a much lower carb base for a pizza crust, feel free to hop on over to my chaffle post. Make the almond flour version and add some italian spices to the batter and you’ll be good to go.

What are the benefits of chickpea flour?

Like other legumes, you get a good dose fiber and protein with chickpeas. If you’re trying to get some fiber into your diet, this is just one more, very simple way to add it.

I’m also going to add that it is filling! So, even though it’s super thin, you’re going to feel satisfied.

I would be remiss if I didn’t also say that it’s so easy to work with. Just mix a few ingredients and bake. 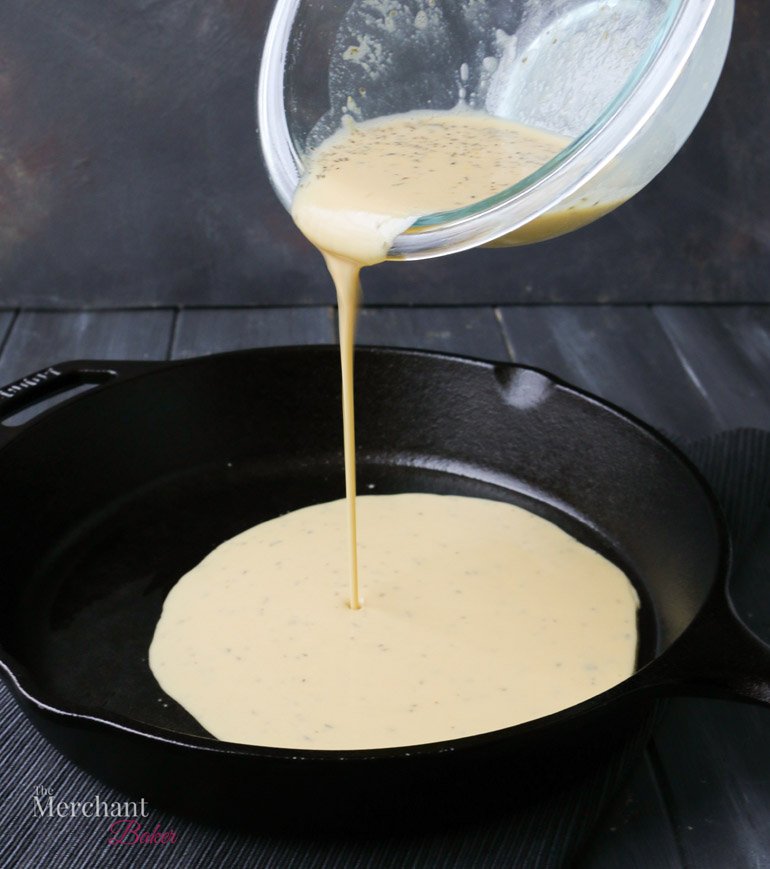 Where do I find chickpea flour/garbanzo bean flour?

I generally find it in the baking section of the organic foods aisle. It’s widely available at large grocery stores, but of course, you can also buy it online. I use Bob’s Red Mill. {aff link}

How to make socca pizza

I swear it couldn’t be easier…There are five ingredients and I bet the only one you might not have is the chickpea flour.

Just mix those ingredients up and you’re ready to go….or are you? 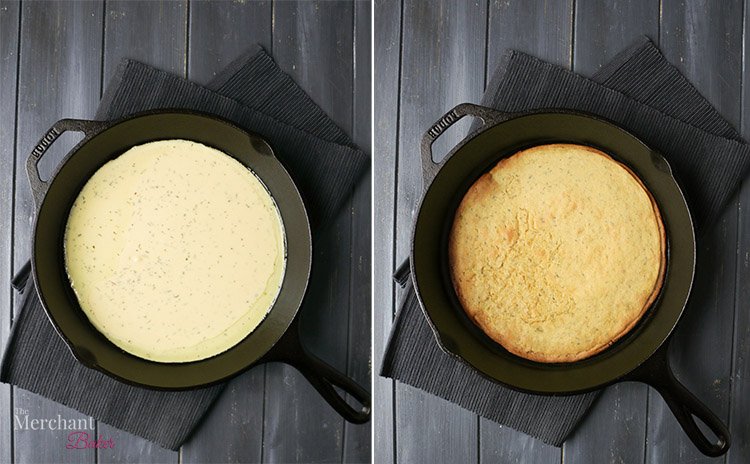 Do I have to let the socca batter rest?

Many recipes call for allowing the batter to rest at least an hour or overnight. This allows the flour to fully hydrate.

I’m going to be honest with you. I haven’t really let the batter rest that often. I usually just mix and go.

I’ve experimented with letting it rest for up to an hour and I do like the texture of the batter after resting. It’s a bit thicker. So, if I just happen to have time and have planned ahead, I’ll let it rest.

But, one of the big benefits of this crust is how fast I can make it. So, if I have the time, I’ll let it rest for about an hour. If I don’t have time? No resting, just mix and bake.

I will admit that I’ll at least try to mix it up before I even preheat the oven, though. I figure that gives it a little head start. But is it mandatory? For my purposes, I’m going to say no. 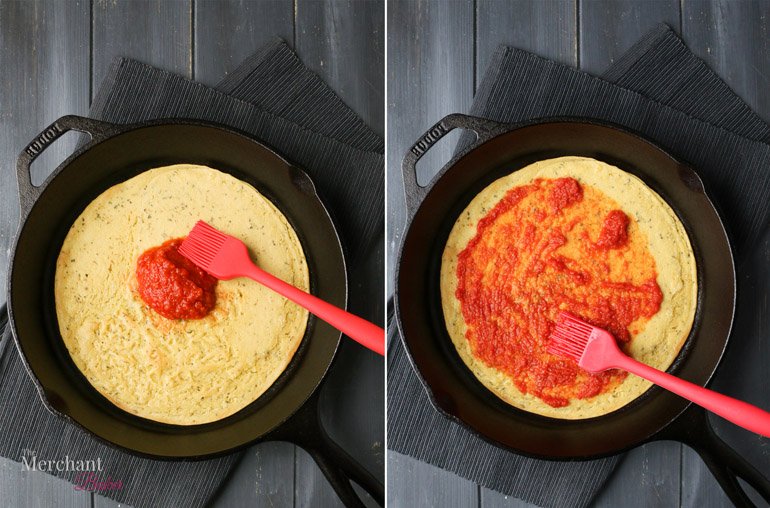 Cast iron skillets are heavy, and the larger they are, the more unwieldy they become. This 10″ size is big enough to actually use to make a meal, but not so large that you’re going to wonder where you’re going to store it.

If you fall in love with your cast iron skillet, you can always add to your collection.

As I said before, it was worth it just for this recipe. The cast iron just helps it get that crisp exterior. And for a pan pizza? It can’t be beat.

Of course, on a non low carb note, this is also a great size to bake my Fluffy Sweet Cornbread in…just sayin’ ;)

What is the texture of the crust?

This will depend a bit on whether or not you used a cast iron skillet and for how long you cooked it. But, generally speaking, the crust will be crispy, a little flaky and yet tender in the center.

In other words, it’s not like a yeast bread. It’s not fluffy and light. It’s thin and kind of light, but still hearty.

Nope. Hummus has all kinds of different flavors added to it, so if you don’t like hummus, it’s kind of irrelevant. If you do like hummus, that’s great, but this is not hummus, so don’t get excited.

Actually…DO get excited! This is another way to get your chickpea/garbanzo bean fix in a whole different way!

Chickpeas have an earthy, mild, somewhat nutty flavor. Chickpea flour has such a different texture than you get from the whole bean that it’s almost hard to relate them to the flour. The earthy, mild, nutty flavor remains, but that’s about it.

I think of it as an earthy blank canvas for whatever flavors I’d like to add. Today, I added Italian seasoning because I’m making a traditionally flavored pizza. Have fun. Experiment with different flavors and toppings. 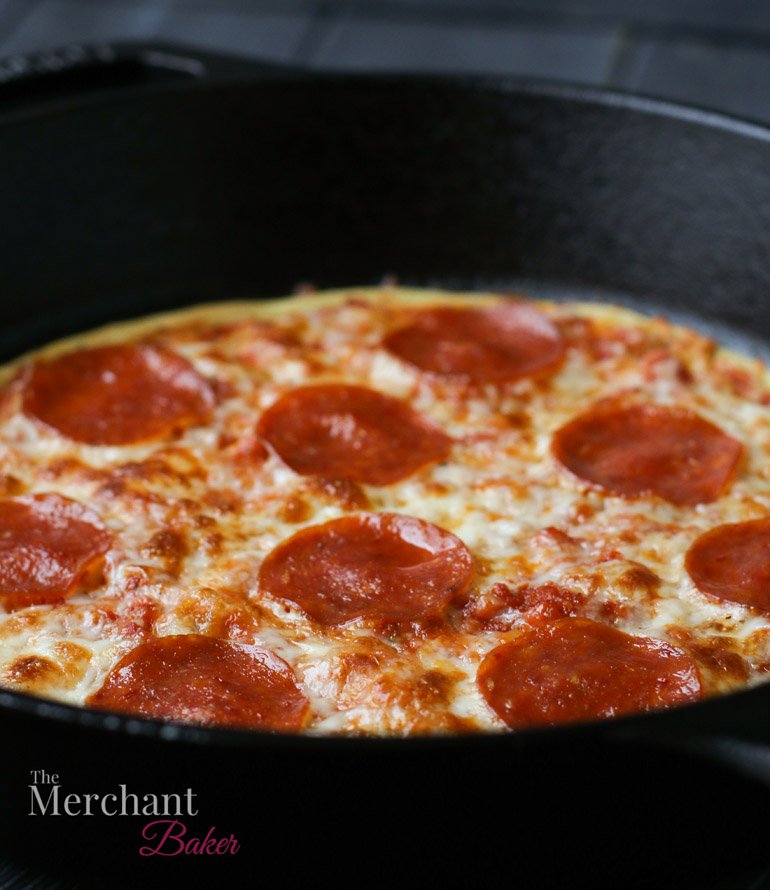 So, now that you have that cast iron skillet, it needs to be preheated before you add the batter.

Just pour some olive oil in the skillet and pop it into a hot oven for five minutes. This will help achieve those crispy edges.

After that, just pour in the batter and bake for about 15-18 minutes or until golden on top and beginning to brown on the edge.

The crust is going back into the oven for another 10 minutes once the toppings are added, so you don’t want to overbake it in the first step and then burn the crust in the second.

When you take the crust out of the oven, be sure to cover the handle with a dish towel or oven mitt!!! You WILL forget that the pan is hot and grab that handle. The towel or mitt will remind you and help to prevent an accidental burn. 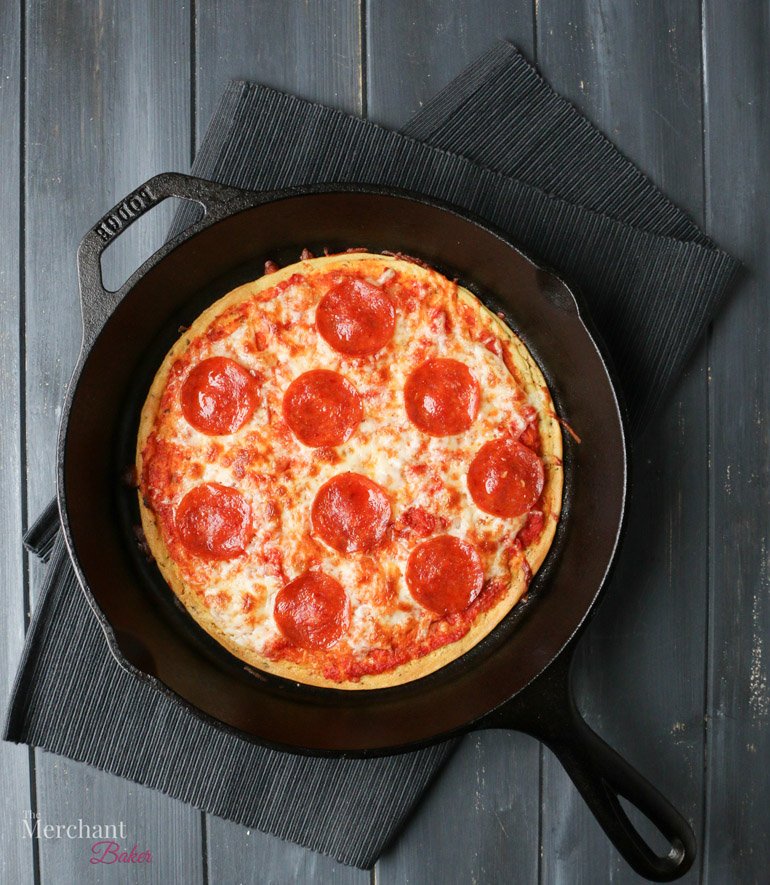 Once the crust is baked, it’s time to top it. I went with a simple pre-made pizza sauce and traditional toppings, mozzarella and pepperoni.

I’ve found that a spoonful or so is plenty. I’ve also found that using a silicone pastry brush {aff. link} makes easy work of spreading pizza sauce around.

I especially like using the brush when using those (not low carb) prebaked brick oven style rectangular pizza crusts. They have so many bubbles and ripples on top that trying to spread sauce with a spoon can be frustrating.

When I figured out that a brush would work, it was slightly life changing.

This crust doesn’t have all of those hills and valleys of a prebaked bubbly crust, but the brush was still more effective than the back of a spoon or ladle, especially when you’re trying to evenly spread a small amount of sauce. You’ll see. Try it! 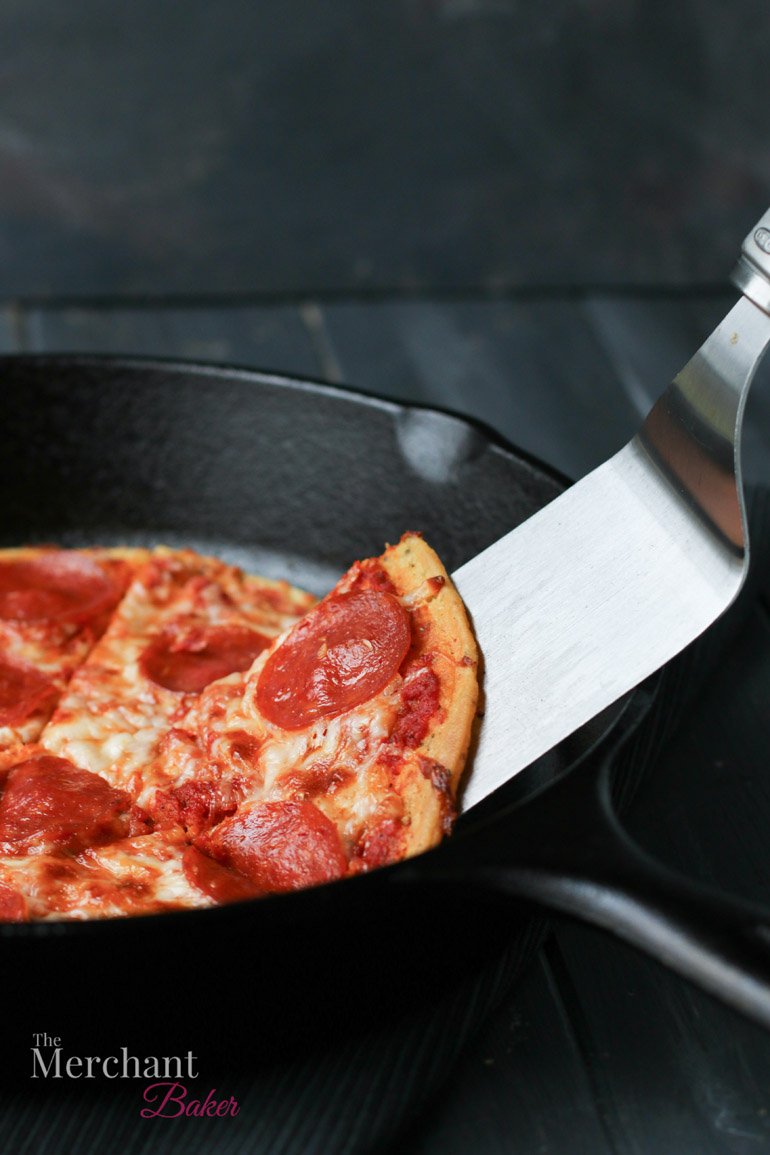 Can I freeze socca?

Yes. I freeze cooked and cooled socca wrapped in plastic wrap, then place it flat in a zip top freezer bag.

I happen to love the crispy edges of socca, so while you could theoretically microwave it, the best way to regain that initial texture is via direct heat.

The law in my house is never reheat pizza in the microwave. I feel the same way about this socca pizza.

Therefore, I recommend reheating at 400 degrees in a toaster oven or conventional oven with the socca placed directly on the oven rack. Heat for 5-10 minutes until heated through and edges are crisp and firm and toppings are bubbly.

So, it’s the first whole week of the new year. I know I’ll be eating lots of veggies and keeping sweets at bay. I also know that Socca Pizza is on the menu for a quick dinner this week. 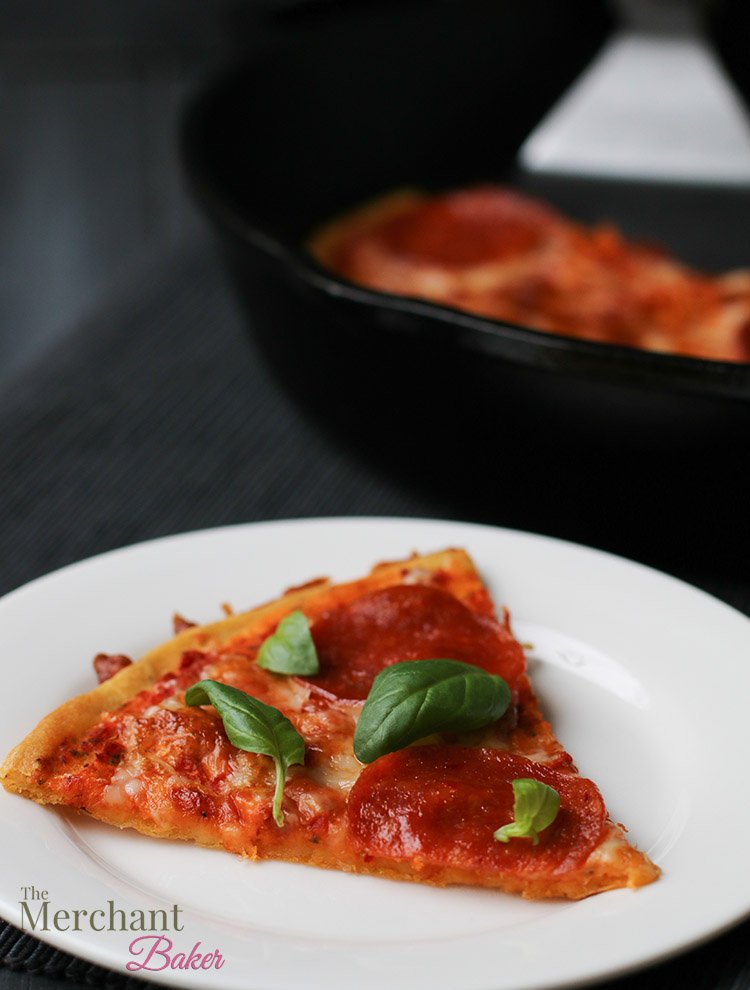 *I truly believe that a cast iron pan is best for this recipe. However, you can experiment using other oven safe skillets. Be careful about non-stick skillets as they often have temperature limits as far as using them in a 450 degree oven. I'm not sure if you'll have any issues with sticking if using a traditional skillet, but it's worth a try. You can also try using a baking pan.

*Many recipes recommend letting the batter rest for an hour or overnight before baking. If I have time, I'll allow for a one hour rest or at least mix up the batter before I even preheat the oven so that it gets a little bit of time to really hydrate before baking. If you have the time and have planned ahead, go ahead and let it rest. If not, just proceed with the recipe as I often do. I still think it's great even if it doesn't get time to rest.

*I didn't give a lot of measurements for toppings. Do what you like. I did give an estimate for sauce because the crust is quite thin, too much sauce will inhibit the crispness of the crust and weigh it down.

*While I love using socca for pizza, I also make it quite often for a quick bread option to eat with soups and stews or even just to snack on. If I'm not using it for pizza, I will let it bake a minute or two longer to get a bit browner and crispier in the oven.