Are you a “fruit in bread” lover? You know, like cinnamon raisin bread? If not, please avert your eyes… 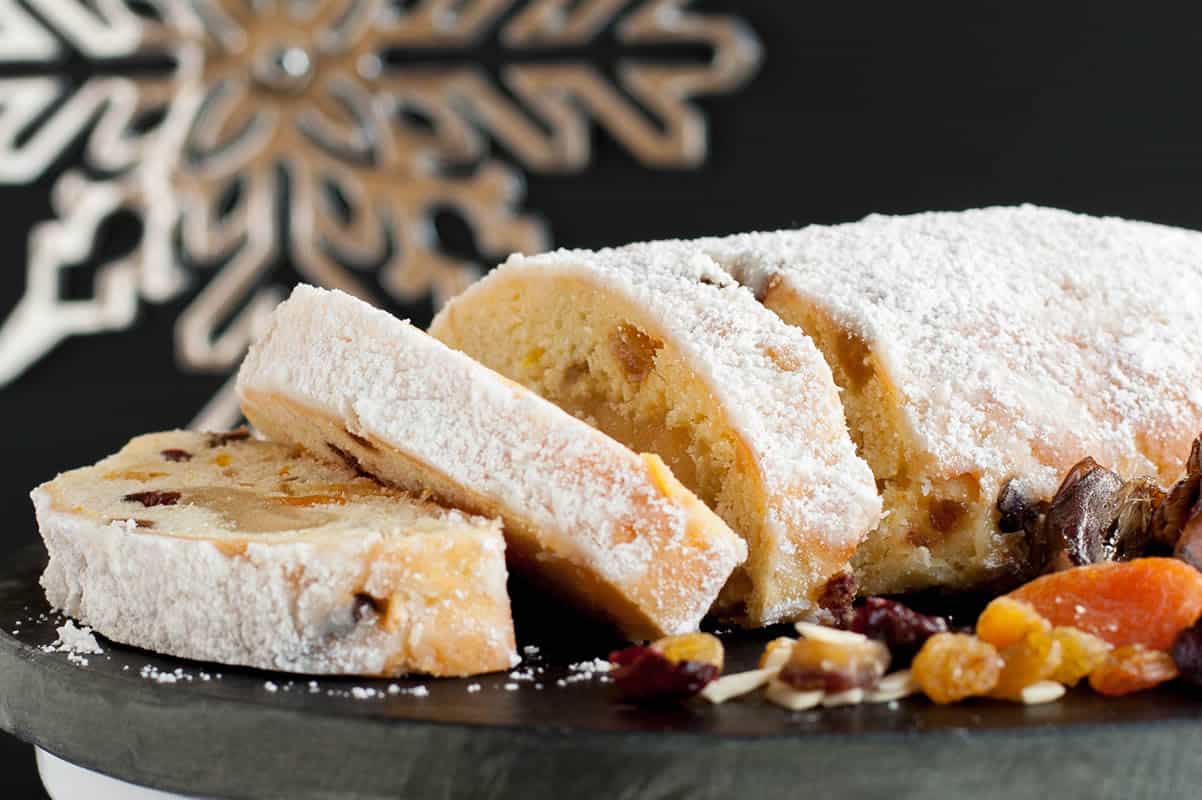 Everyone else? Come in a little closer, because do I have a treat for you! Shortcut Stollen! Yep…the flavors of traditional stollen all in an easy to mix up and bake recipe!!! This bread is so delicious I want to sing it from the mountain tops! It just tastes like Christmas, with all its buttery, citrusy almond flavors.

I started thinking about this bread last year, when I was making Irish Soda Bread from a most beloved recipe. I loved that recipe so much, I created a wonderful Chocolate Cherry Soda Bread. Then I tried other fruits and nuts but those were just not as flavorful without the caraway seed that went into the original.

Last Christmas, a good friend of mine told me she was deep in the long process of making Dresden Stollen. Dresden Stollen is a German bread made at Christmas that’s got traditions that date back to 1500 when it was first sold to the people of Dresden. 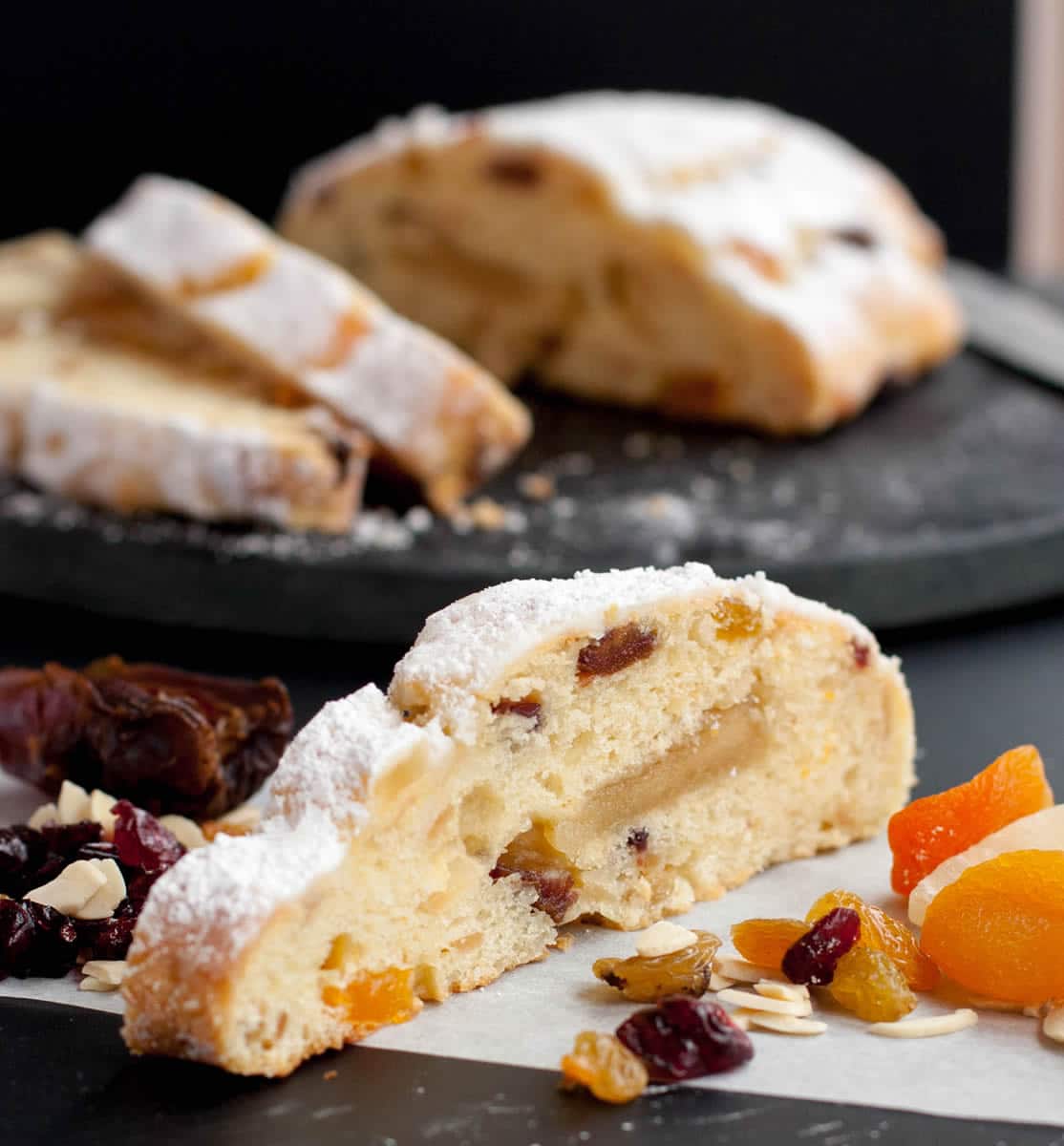 If I remember correctly, my friend was busy soaking the fruit and going through the whole process of waiting for dough to rise. She mentioned storing if for weeks so that the flavors could meld properly. It sounded amazing! (And knowing her expert baking skills, I’m sure it was :) It also sounded like I wish she’d just drop off a slice for me to taste so that I wouldn’t have to go through the whole long process.

I thought about my Irish Soda Bread and decided that some day, I would work on turning it into a Shortcut Stollen. I knew that my last attempt at just adding different fruits and flavors wasn’t enough and that I would have to dig a little deeper on how to best accomplish it.

I happened upon a recipe from King Arthur Flour and realized I wasn’t the first to try capture the wonderful flavors of stollen in a non-yeast bread. So, I took some cues from that recipe and re-worked my Irish Soda Bread recipe until I had something I loved. Oh, and I do love this bread! It’s like Irish soda bread and stollen and scones and biscuits and Christmas cookies and cake all rolled up into one delicious loaf of yum! The best part is how easy it is to make.  No yeast, no rising, nothing fussy. 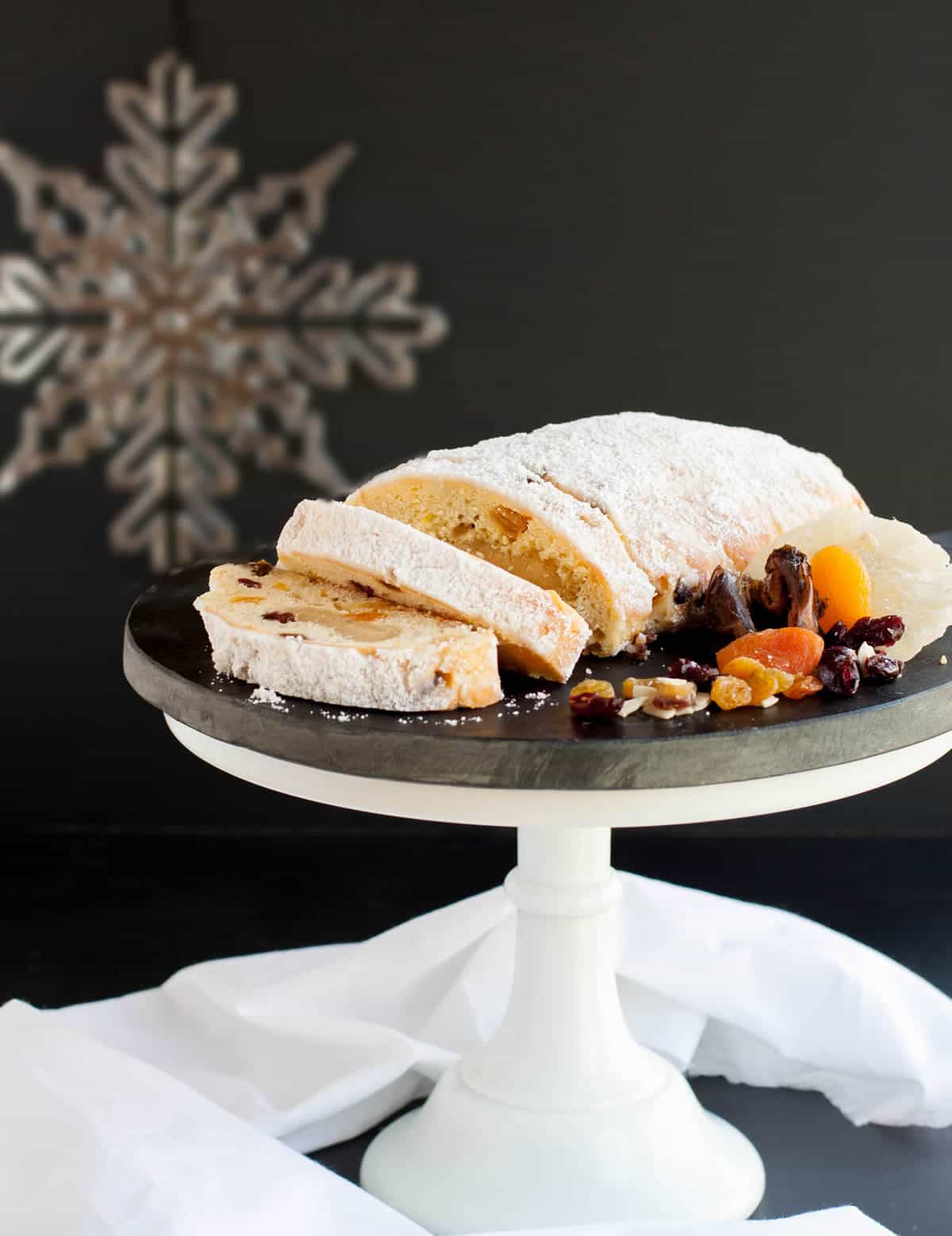 I started with whisking together my dry ingredients, cutting in some butter for some extra richness. Then the flavors…I thought about adding in vanilla, but I skipped it in favor of Buttery Sweet Dough Flavor. I used it in my Brown Sugar Butter Pecan Scones; it has a buttery citrusy flavor that is so perfect for this bread. I added more citrus flavor with the zest of a lemon and an orange. I toasted some sliced almonds and chopped up the same dried fruits (plus raisins) I used in my Goat Cheese with Honeyed Fruit and Nuts. The zest, nuts and fruit all get tossed around in the flour mixture, then the eggs and sour cream and other wet ingredients get incorporated.

Now you have a bowl of sticky dough. With the Irish Soda Bread, I would just pour it into my prepared springform pan, but for this, I poured it out onto a well floured surface to mix it a bit more. I used the same folding technique I used in Fluffy Buttermilk Biscuits. Basically, it looks a little like kneading, but I just folded it over and turned it a few times until it became a nice soft dough. You can check out the video in the Fluffy Buttermilk Biscuit post to see how to do that step. 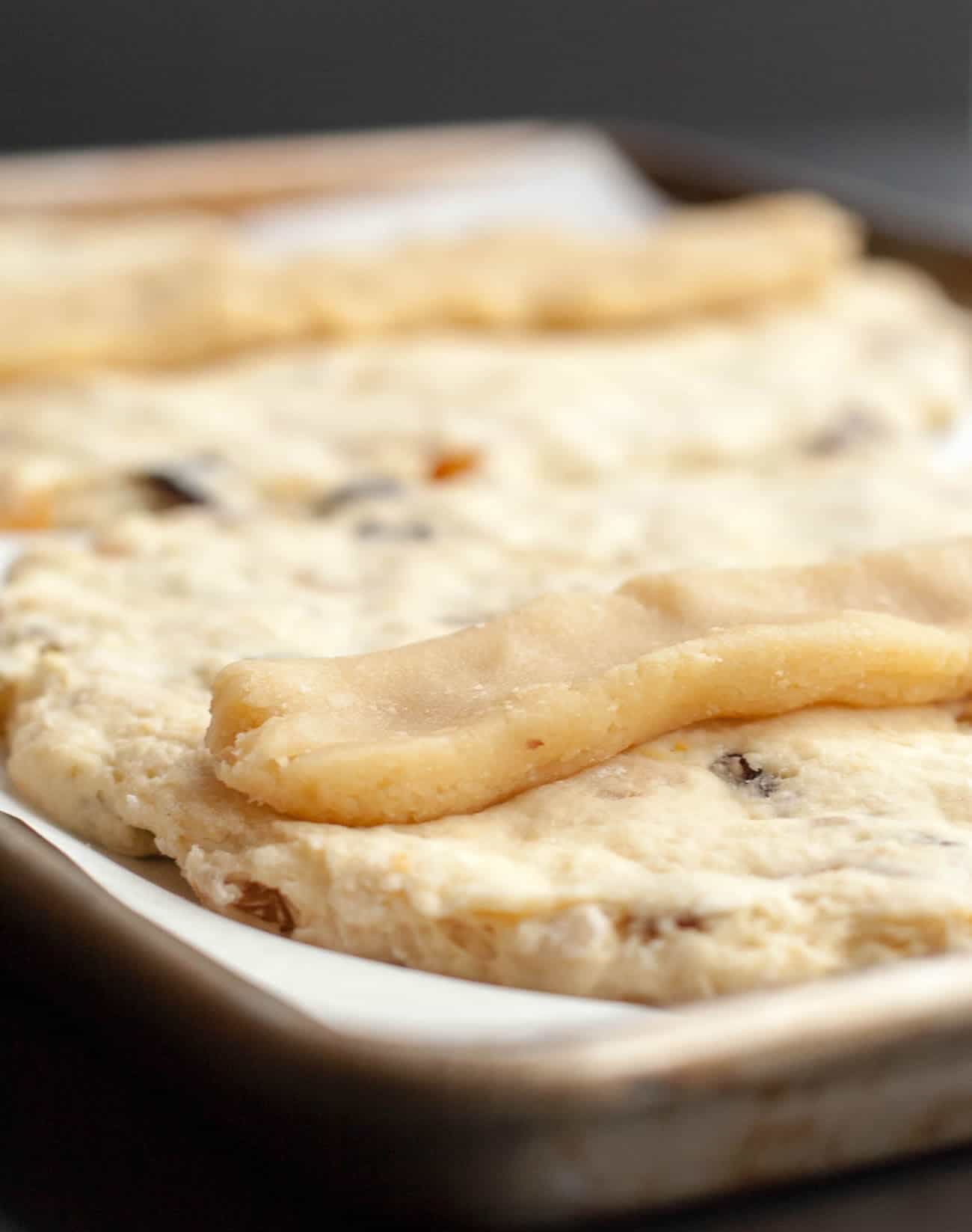 The dough is then divided in half and placed onto a parchment lined baking sheet. Press the dough into two ovals about 1/2″ thick. I used the whole width of my half sheet pan for the length of the loaves, so they were about a foot long and maybe 9 to 10 inches wide. I didn’t measure. I just patted them until they were about the 1/2″ thick and wide enough to fold in half. 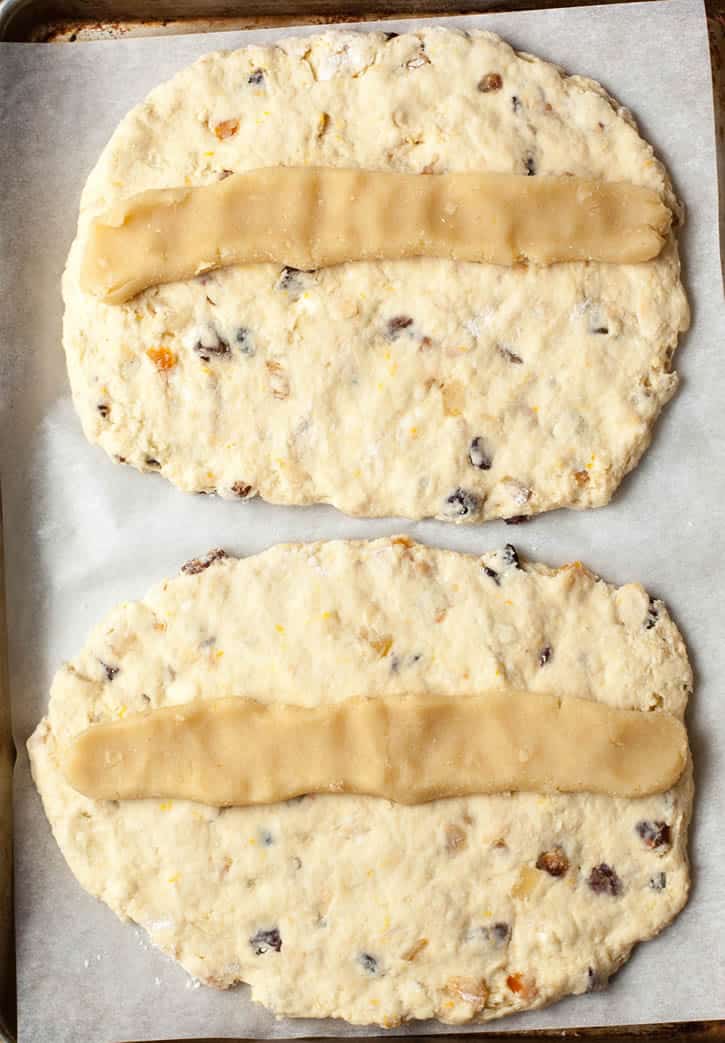 Then, I decided to add a strip of almond paste. I used Odense. (You can find almond paste in the baking aisle.) I divided one 7 ounce tube in half lengthwise, and formed it into a long strip that ran the full length of the oval. It’s very easy to work with and it comes ready to use right out of the package. Then, just lift and fold the dough over the almond paste just stopping short of the edge. I should have floured the pan a little so the dough wouldn’t stick, but I forgot. You’ll see some dough sticking to parchment. No worries. It worked out. It was just a little sticky to fold over, but it doesn’t have to be perfect. Just fold it over and press to seal. 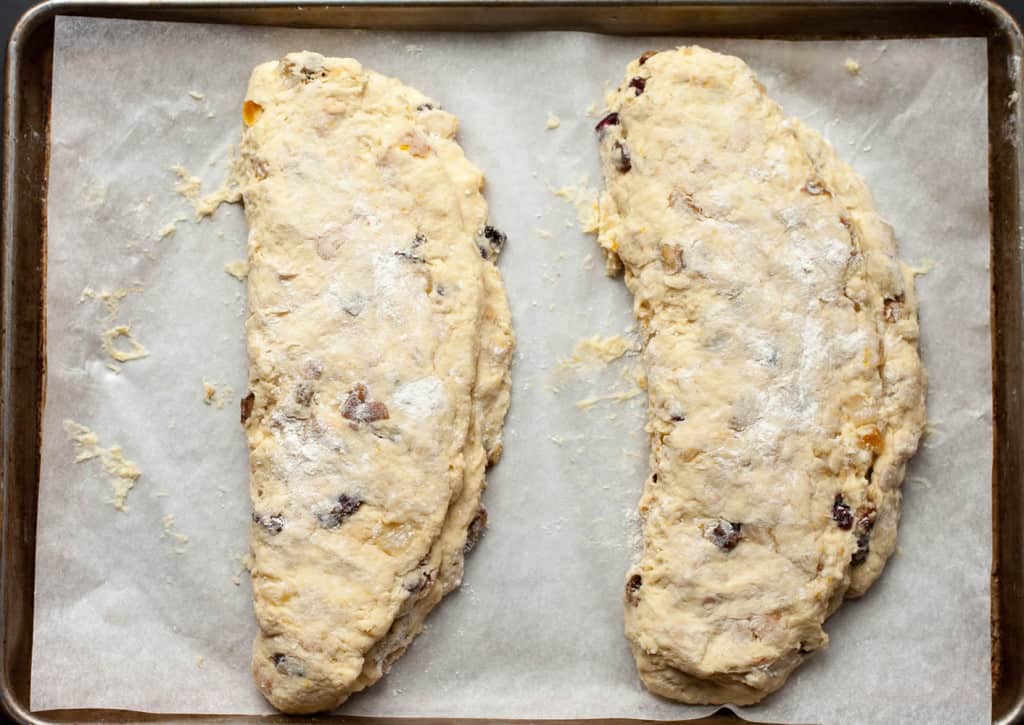 Bake it to a beautiful light golden brown, 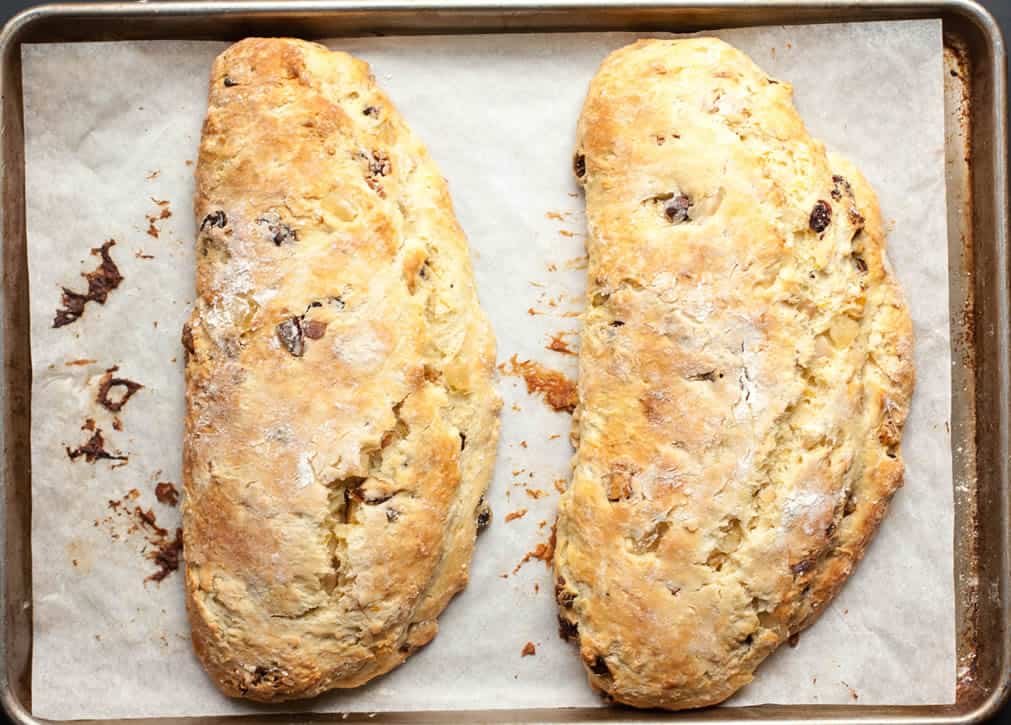 then, while it’s still hot, brush it with melted butter. (Swoon!) 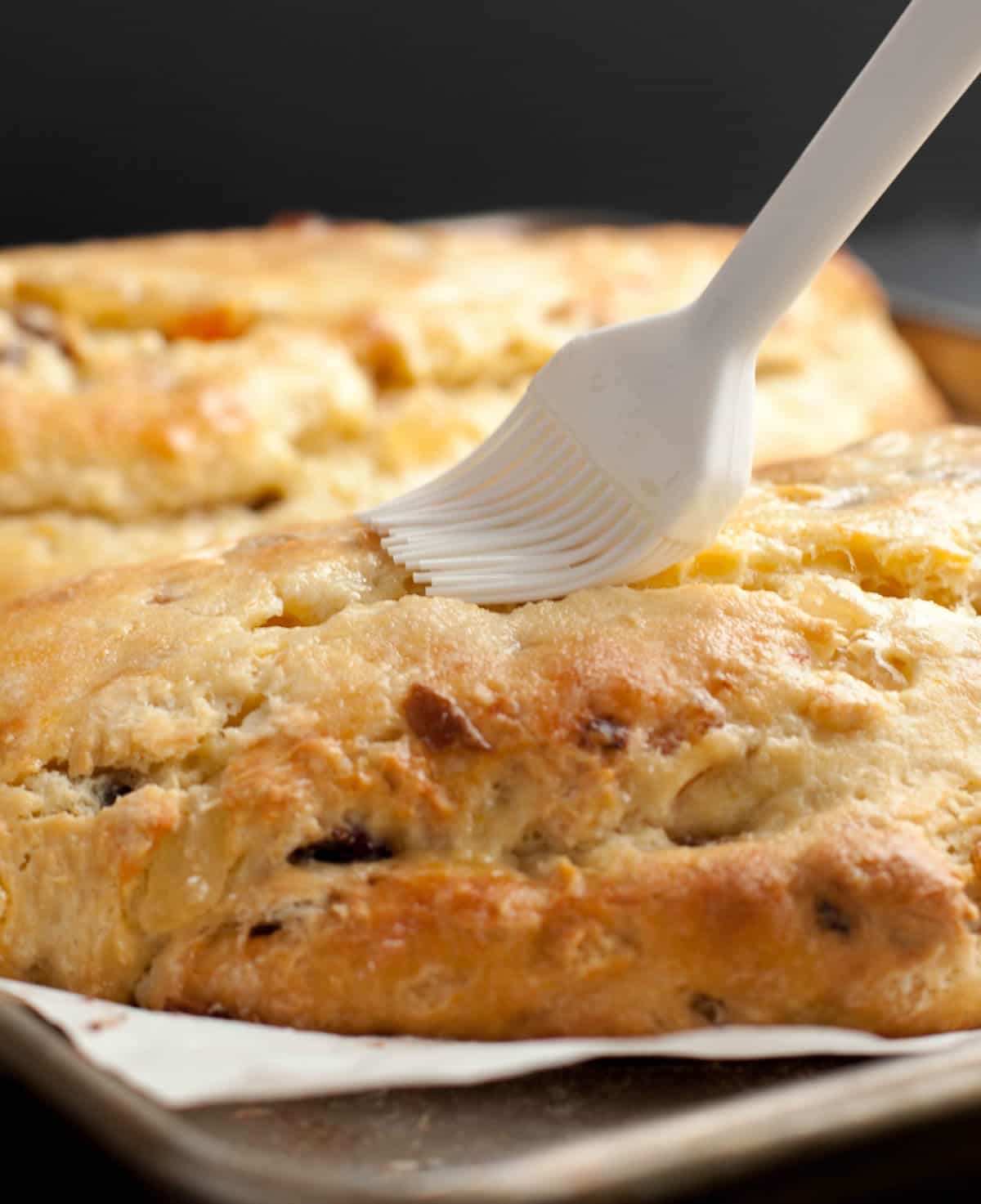 Then coat it with a generous layer of confectioner’s sugar. 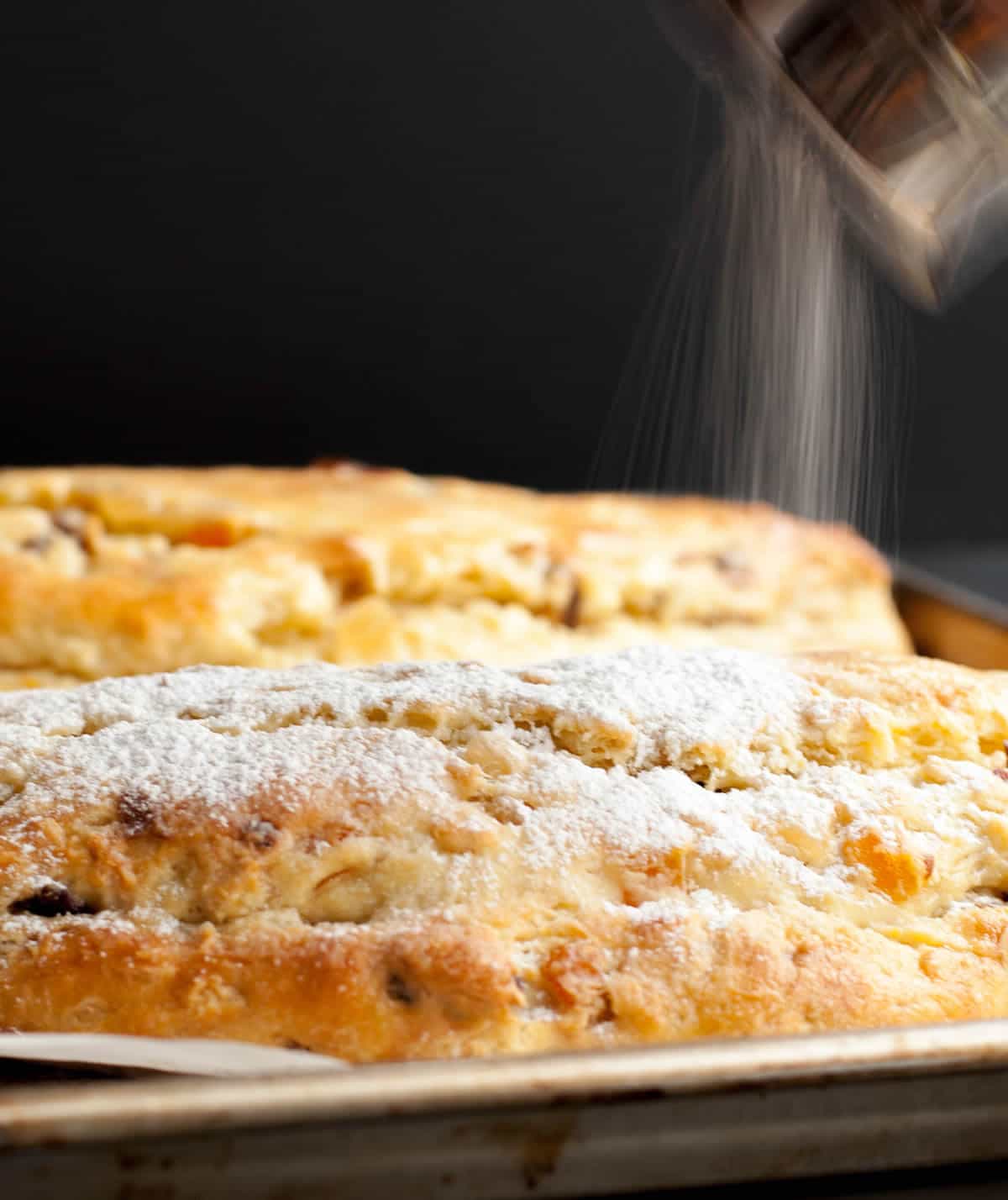 After it’s fully cool, it’s brushed with yet another layer of butter….yep, right on top of the layer of confectioner’s sugar…Then, just dust with a final layer of powdered sugar until you have what looks like a blinding blizzard of sugar. (I switched out from my shaker to a sieve for the second coating and it kind of went everywhere :/ 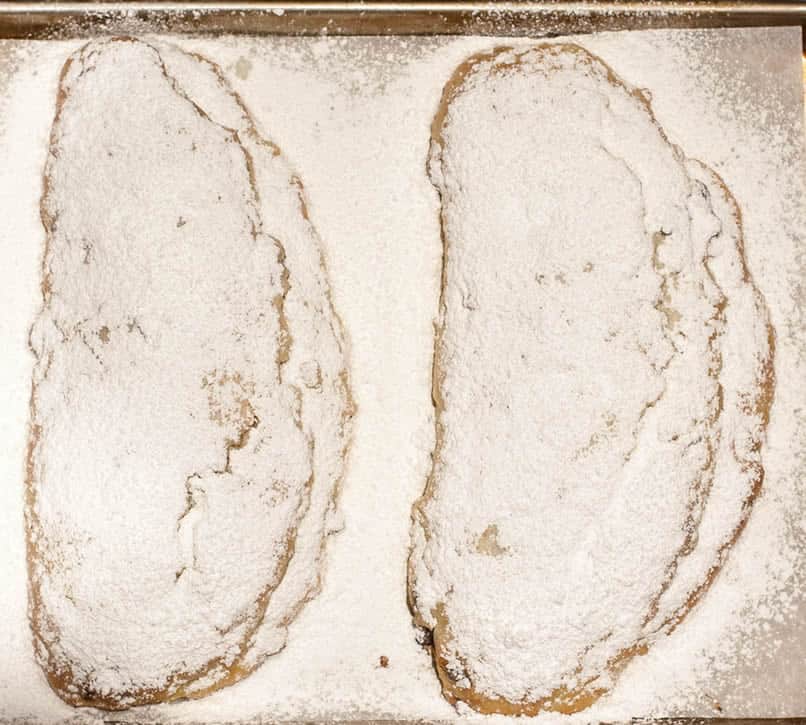 This double process creates a thick, sweet buttery coating on the top of the loaf that accents all of the wonderful fruit, citrus and almond flavor inside. (That coating of butter and sugar will also cover up any issues you may have had in forming the bread. See? I told you it didn’t have to be perfect:) 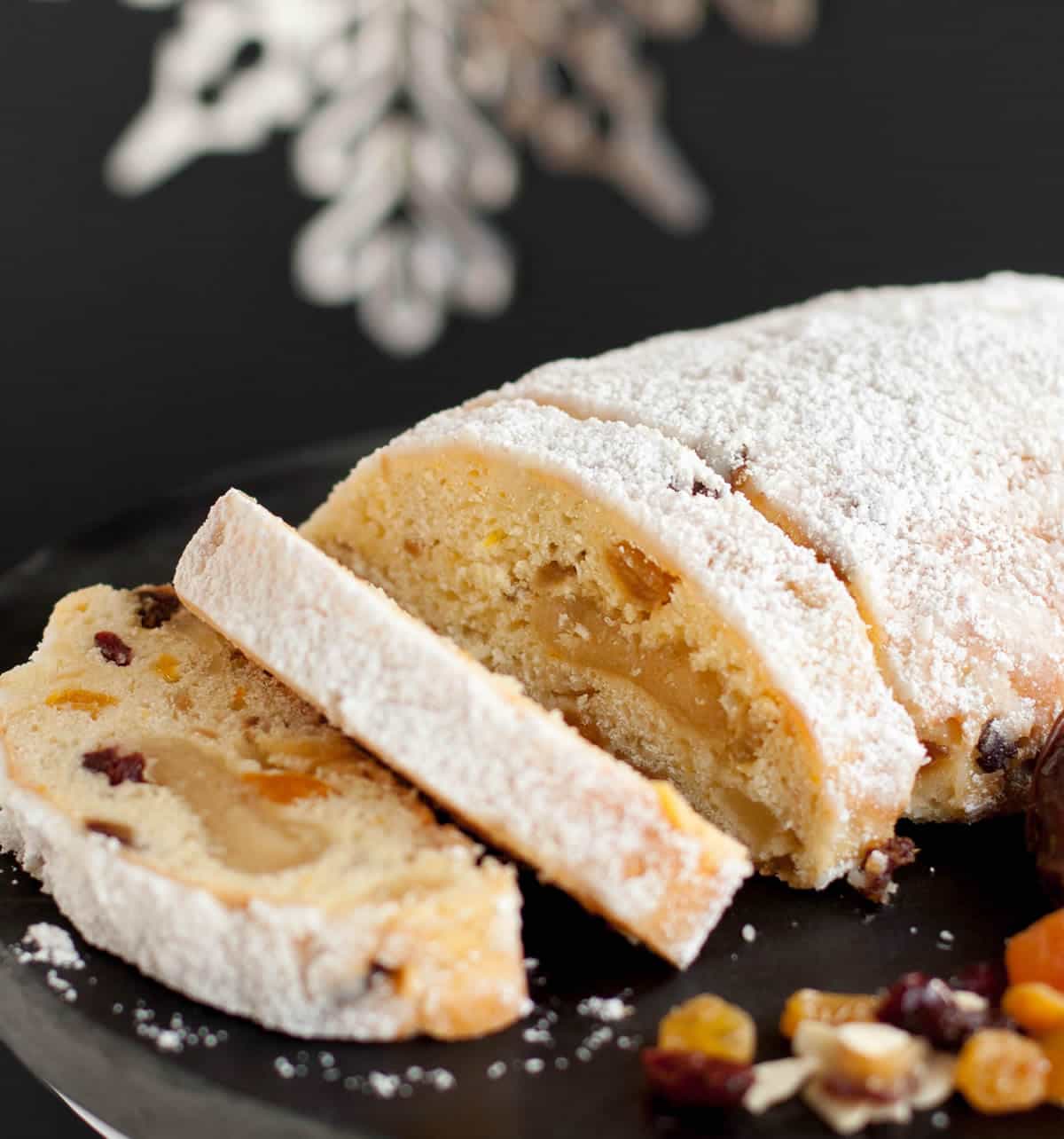 When you slice into it, you’ll see all of the fruits…the cranberries and raisins, the dates, apricots and pineapple. The sliced almonds kind of meld in with everything and give you just a gentle crunch now and then. I actually liked that. I tried the bread once with slivered almonds and I didn’t love the texture for this bread. It was too crunchy. Then, there’s that lovely strip of almond paste running down the center. It’s like a wonderful surprise in the middle of all of that fruit and delicious bread.

I think the bread is best the first two days. It starts to dry out a bit after that. I just had a slice after a week. It was just a bit dry, so I toasted it and that worked out very well. (Seriously, I’m noshing on that toasted slice while I’m writing this and it is wonderful.) I didn’t soak the fruit before adding, but I may try that next time. (I know the dried fruits soak up moisture from the bread over time, so perhaps soaking them will extend the life of the bread even further. I was worried that they might be too wet for the bread, so I’m going to have to experiment a little with that.) 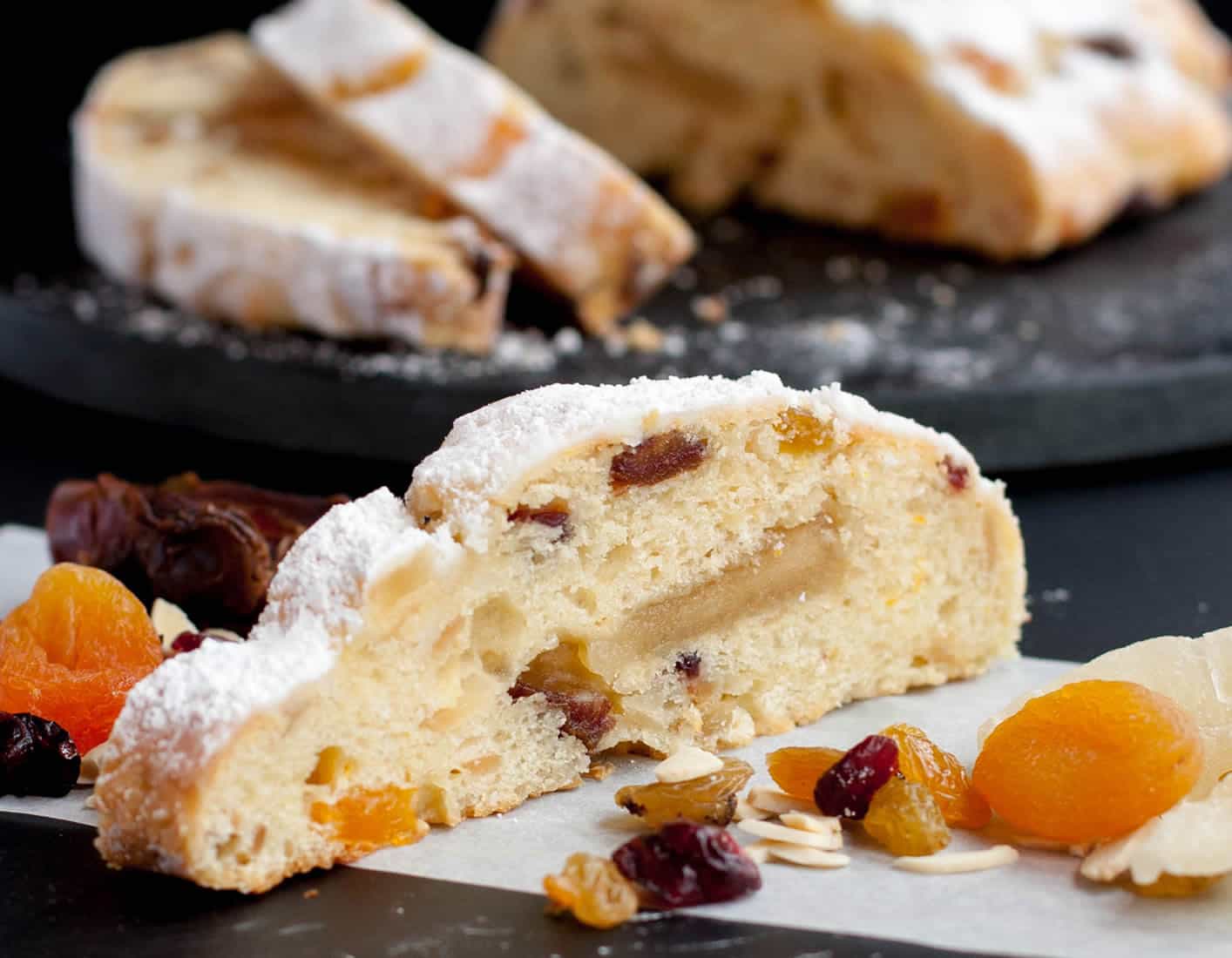 So, is this a traditional stollen? No. Have I ever had an original Christstollen from Dresden that was freshly made so that I could fall deeply in love with it? No (but I would love to…) Could this be a replacement for a traditional stollen? Maybe, if you’re not in the mood for a lengthy process, this will do quite nicely. Will my lovely German readers forgive me for stepping away from tradition? Hopefully, because this is the most delicious fruit filled bread I’ve made since the beloved Irish Soda Bread.

Shortcut Stollen. Inspired by a bread that’s been a Christmas tradition for hundreds of years. This one is so easy, perhaps you’ll start your own tradition of making it. For me, 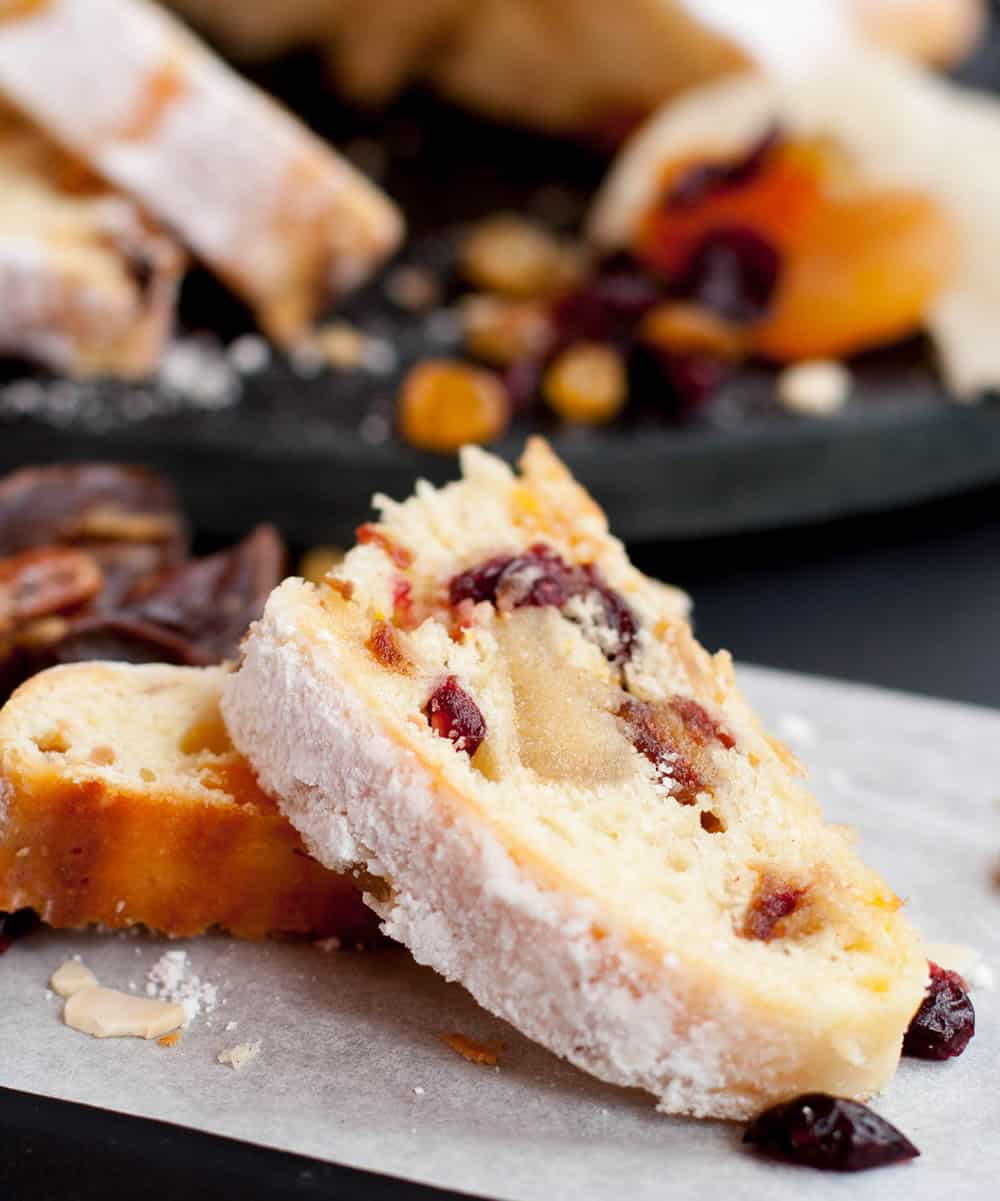 *I think the bread is best the first couple of days. After that, it begins to dry out a little. However, if you take a slice and toast it in a toaster oven, it will bring it back to a moister state...and it will be warm and a little toasty and delicious. Be sure to use foil when toasting or your topping will melt onto the bottom of your toaster oven.

*The next time I make this, I'm going to try soaking the fruit first either in hot water or other flavored liquid (you could use rum or other spirit.) I would drain the fruit really well before adding it to the mixture. I would also add them after the liquid ingredients instead of before since they will also be wet. I think the re-hydrated fruit will help prevent the loaf from drying out. I'm not sure how it will affect the texture, so I need to test it out before confirming how it will work.

*I chopped all the dried fruit up into about the size of raisins or dried cranberries.

*You can shape your almond paste anyway you want. You can make it a round tube or flatten it even further. You could even double the almond paste if you want more filling. This amount was perfect for us.

*I used light sour cream, but you could use full fat.

This is a great recipe! Just made it and I am amazed how it turned out. I used sifted spelt flour, because my daughter can't have wheat. My family says it's the best Christstollen they ever had!

Wow! This looks amazing. My mother-in-law is from Germany and would love it if I made this for Christmas. I will have to make it for her and report back. Looks so yummy and I LOVED your Irish soda bread. Thanks for a great idea .

Cyndi, it was so good! It's like the Irish Soda Bread but a little richer from the addition of butter and so full of Christmas flavor. Can't wait to hear back! (On a side note, I did buy extra almond paste because I'm dying to make the recipe you sent me :) One of the downsides of blogging is not having enough time to try all the recipes...but eventually, that cake will be made!