I make about 1400 cookies/candies every holiday season. 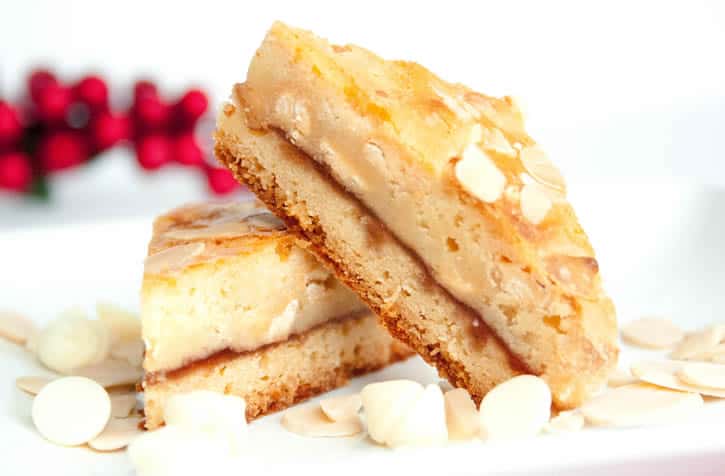 Yes.  1400.  It’s insane.  It’s usually divided up among about 16 different kinds, some recipes doubled, some quadrupled, but however you look at it, it’s a lot of treats.  I dialed it back last year by not doubling or quadrupling so much, trying to coordinate with our ever changing gifting needs.  I usually include a list of the cookies to help the recipient identify the different varieties.  Raspberry White Chocolate Almond Blondies  has been on the list EVERY year since the first time I made them.  They are a favorite of many and some ask me to include extra on their plate because they enjoy them so much. 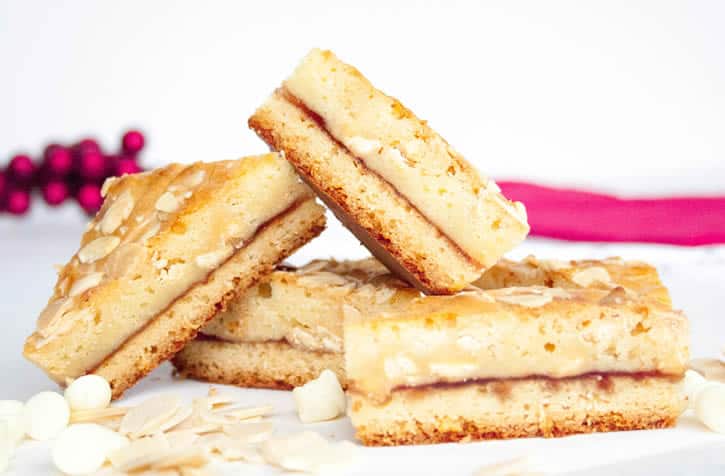 Each December, I try to cull down the list of cookies and candies I want to make.  It’s difficult because we have so many traditional favorites, but we also want to try new ideas as well.  I would need at least 25 different kinds of cookies to even begin to tackle the list I want to make.  This one is a no brainer.  I have to make it. I’m always asked for the recipe (now I can just tell them to check out the blog!)  And there’s a group of people who would be very sad if it wasn’t included as part of their cookie plate, not the least of which is my daughter.  I think this recipe falls in her top three favorite Christmas cookies. 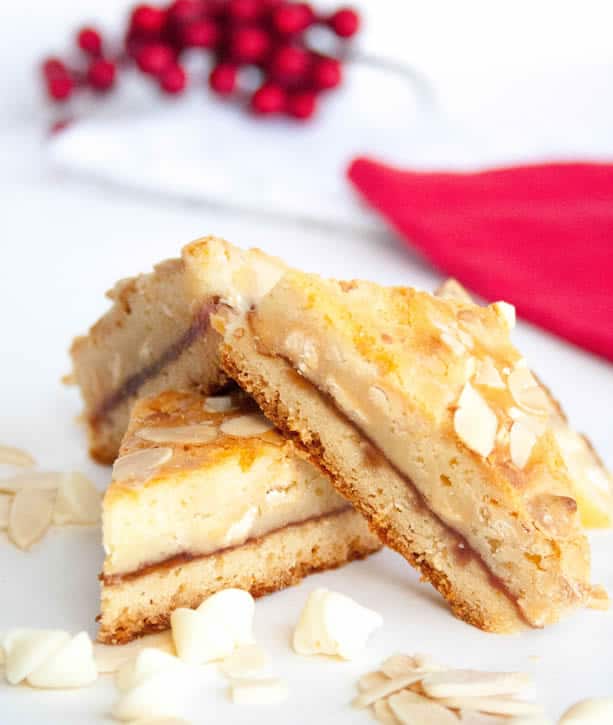 If anyone is reading this who’s received these cookies from me before, I’ve changed the name a bit.  I used to call them Raspberry White Chocolate Almond Triangles to help you identify them by shape on the tray.  As I was putting this post together, it occurred to me that they are very similar to blondies.  So, don’t be confused.  It’s the same wonderful bar you’ve come to know and love, just with a slightly different name, to help describe them better to the newcomers.

For those of you who are new to the recipe, you really have to make these at least once.  The bar is rich and buttery and sweet and dense and creamy and…ugh!  delicious!  I love, love, love the smell of almonds.  The almond extract in this recipe is a great complement to the sweet raspberry filling.  Toasted sliced almonds on top add just a mild crunchy texture and hint to the almond flavor within. 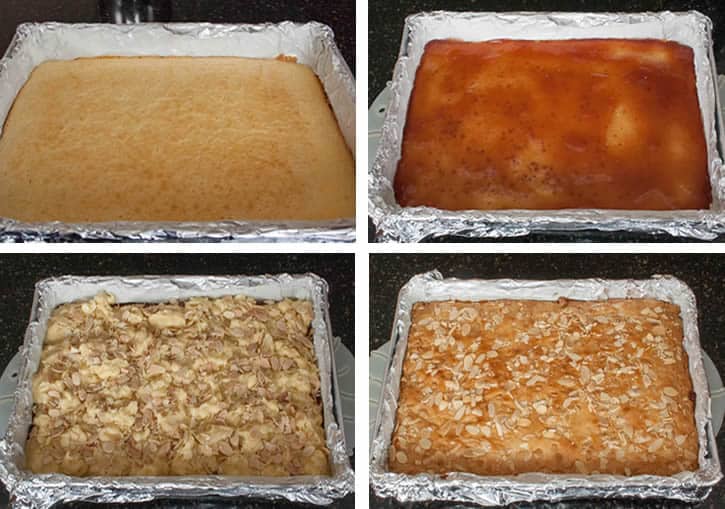 You’ll start with an easy batter, filled with some partially melted white chocolate.  This will be your bottom crust layer.  You’ll bake it for 10-15 minutes, spread with some melted raspberry jam, top with the rest of the batter that’s filled with even more white chocolate, sprinkle on some almonds and finish baking. 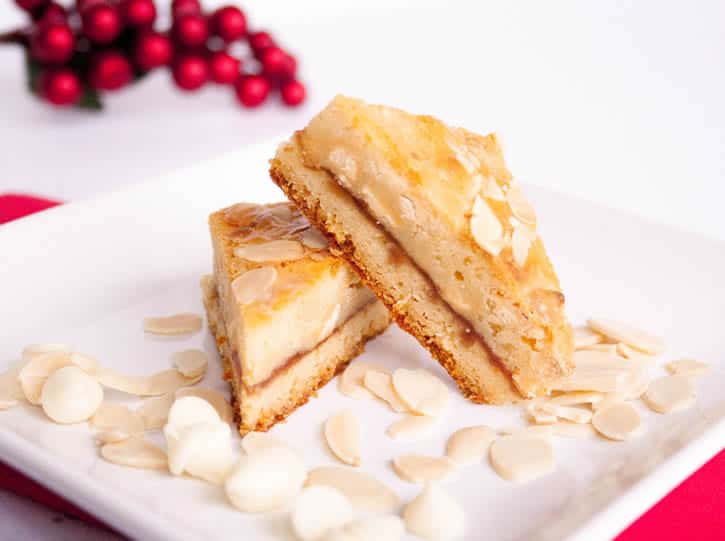 It’s such a great cookie.  It’s like a raspberry almond Danish pastry married a white chocolate macadamia nut cookie and had a blondie baby.  Hmmm…I might have gone too far with that description, but I think I leave it in and be embarrassed about it later…just in case it woos some of you over to trying the recipe.

So, get yourself some white chocolate and raspberry jam and throw this bar together.  It has all the wonderful tastes of the holidays wrapped up in one pretty little bar.  Raspberry White Chocolate Almond Blondies…Make them once…

And I’m willing to bet you’ll be making them again.

*This recipe may be halved and baked in an 8" or 9" square pan. Partially bake the first layer as directed for 10-15 minutes or until light golden brown. Once you've added the jam, remaining batter and almond layer, bake for 25-35 minutes or until toothpick comes out clean.

*You can also double this recipe and bake successfully in a 16 inch square pan, if you happen to have that size pan and you need a large quantity.

*The yield of 48 triangles is achieved by cutting 4 rows on the short side and 6 on the long side, then cutting each of those squares in half diagonally.

*Store in an airtight container at room temperature up to 3 days or pack in freezer bags and freeze up to 2 months.

These were perfect! I had to make some cookies for a bridal shower and made these. They have been on my must-try list for awhile. These really remind me of a cake that I make that has almond paste in the dough. I would love to send you the recipe as a thank you for so many great recipes. Have a great day!

Cyndi, so glad they were a hit! They truly are a favorite of so many who have tried them. I'd love to see your cake recipe. I adore almond desserts and your cake recipe sounds delicious! Tried and true recipes are the best kind! Thank you!

That's quite an impressive number of cookies! These blondies look so irresistible, and I always love the pairing of white chocolate & raspberry flavors!

The flavors are so good in this cookie and if you love almond...this is one really delicious bar!

Whooooaaaaa! 1400!!! That's insane! Last year I made around 500 cookies during the holidays and though that was crazy. I'll be waiting to see 1400 cookie recipes in the next 20 days...lol! These blondies look scrumptious!

I bow down to you, great cookie maker! WOW that's a lot of cookies. And these? Are fabulous!

Yes...but never have I baked that many cookies AND blogged about them! So we'll see how we manage with that new challenge...If only all those cookies were already baked and shot today...sigh...