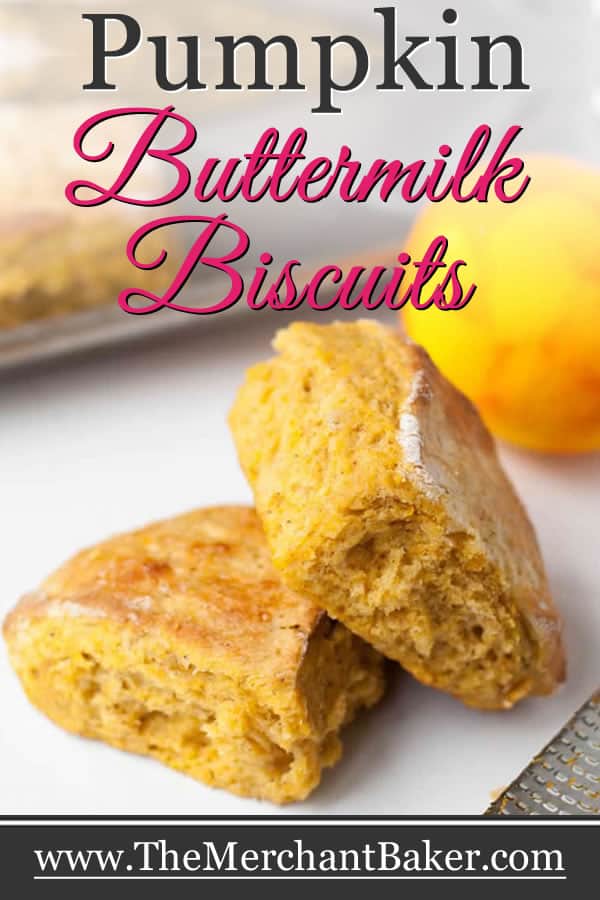 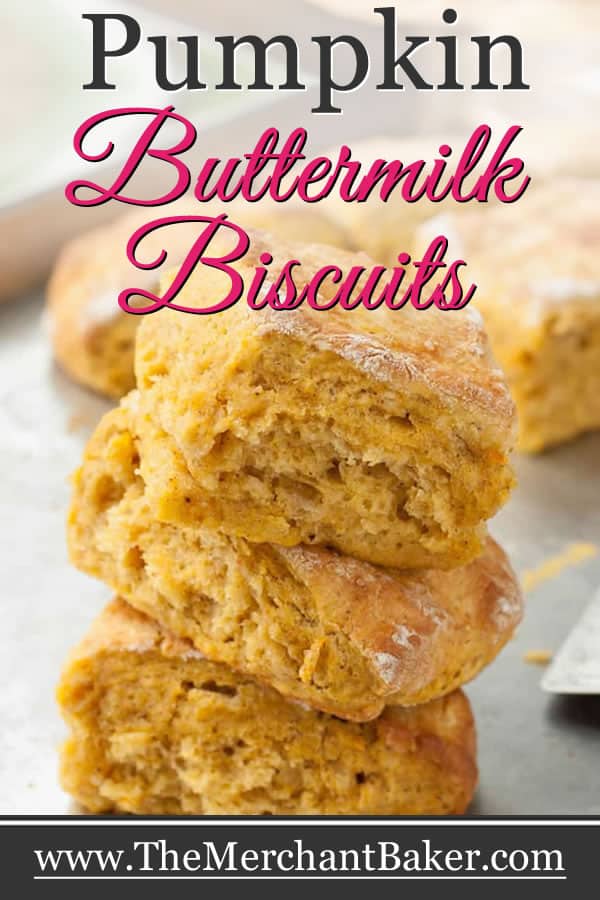 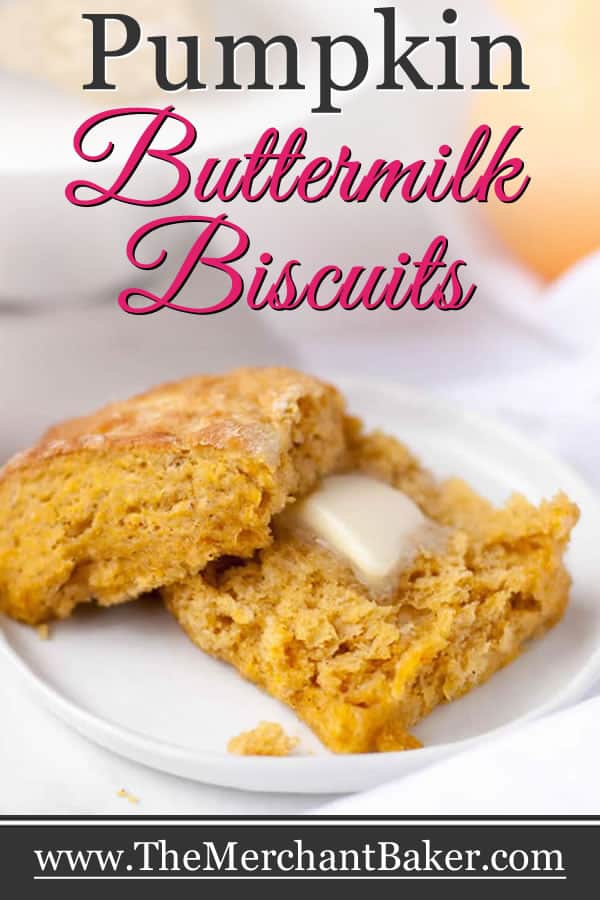 I’m sliding one more breakfast idea your way before Thanksgiving. 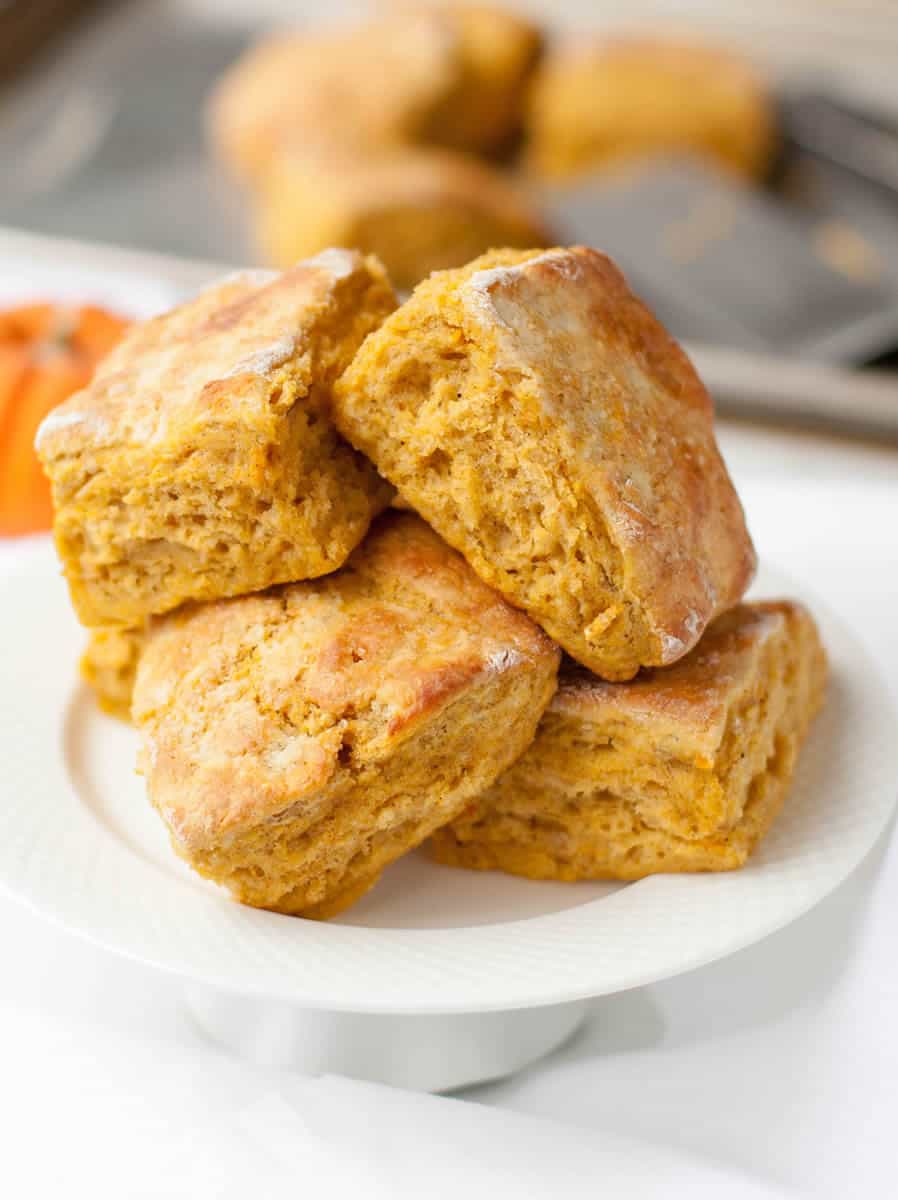 Pumpkin Buttermilk Biscuits. You know I love biscuits and scones. I’ve been dying to develop my own pumpkin version of both, but I kind of had a feeling I would nail the biscuit before the scone. Scone texture can get so tricky, especially since I like my scones “just so” and pumpkin can do all kinds of stuff to texture and density…I decided I wanted an easy win and went with the biscuit. 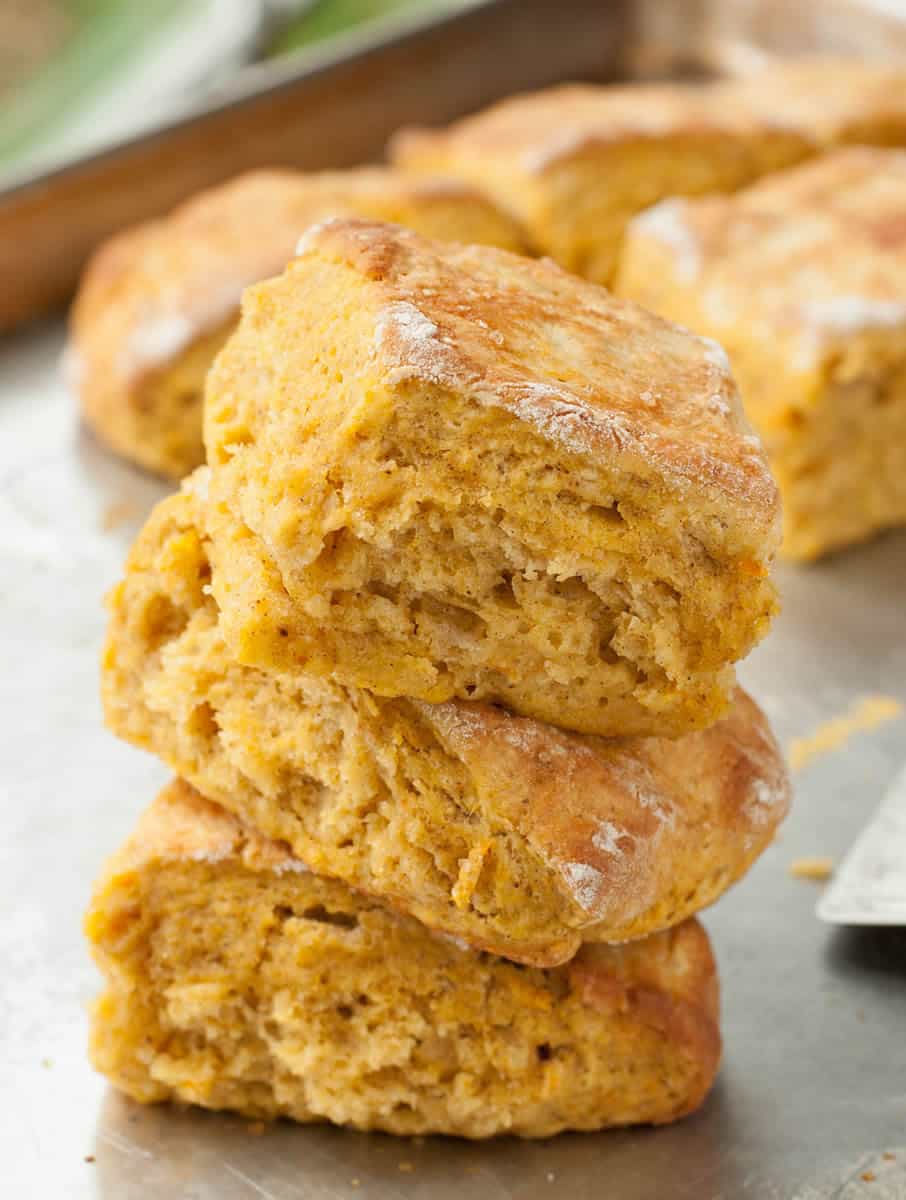 If you’ve checked out my Fluffy Buttermilk Biscuit post, you know I’m pretty serious about making them with all of the right ingredients. If you love a fluffy buttermilk biscuit, you must try that recipe. As an extra bonus, it doesn’t have as much fat as a lot of other biscuit recipes.  When I went down the road of testing a pumpkin version, I was so excited to nail it on the first try. Yay! I’m particularly excited because I have another pumpkin recipe that I’ve been developing that’s pretty much brought me to my knees…but it’s going to be really, really good…once I get it right. I’m not sure when that’s going to happen though, with holiday baking upon us. Will you be interested in pumpkin in March? Probably not… :( 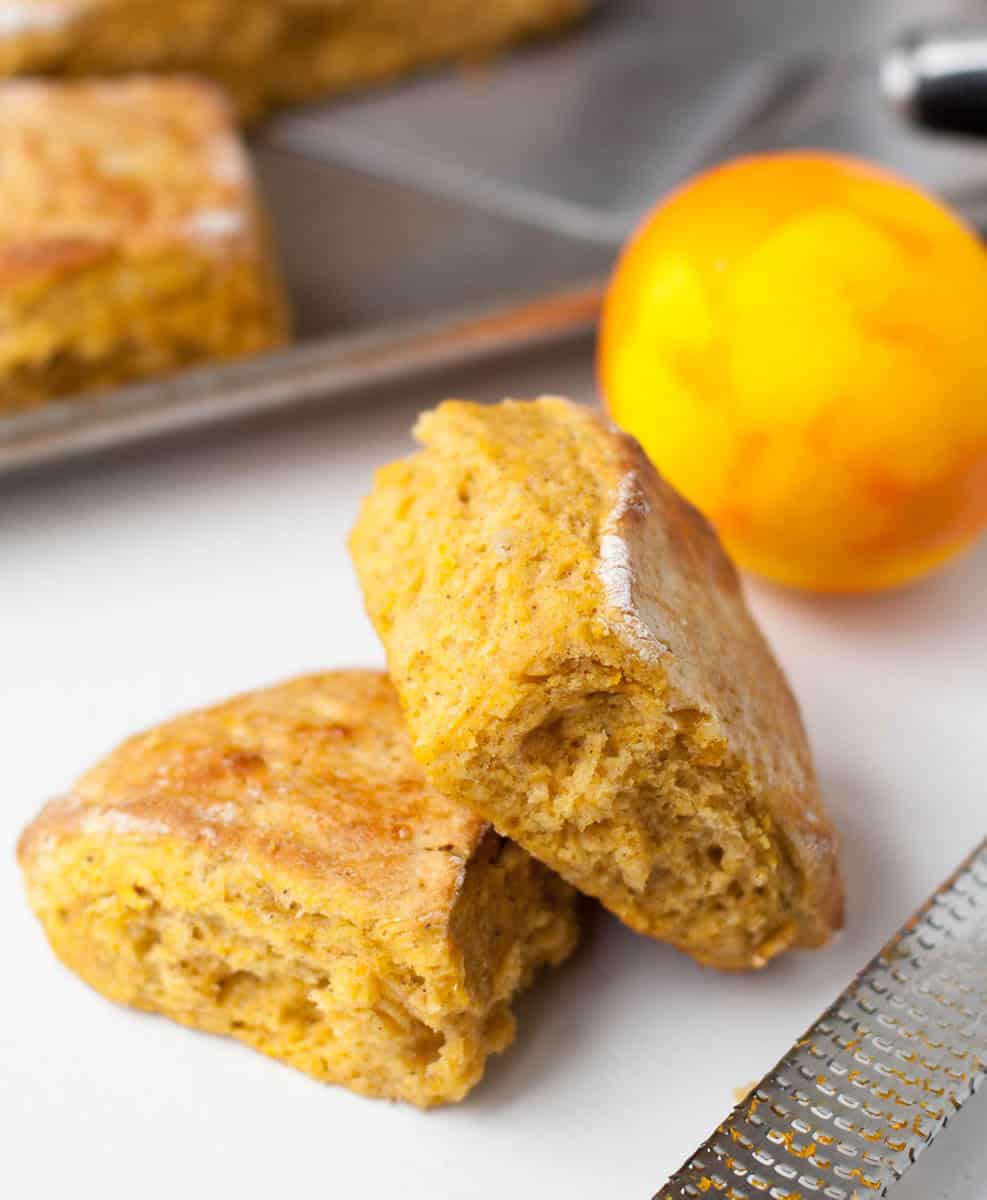 With this biscuit, I wanted to make sure I maintained all that lovely fluffiness, but in pumpkin form. I added the requisite pumpkin puree, backing down on the buttermilk so that my liquid proportion stayed in balance with the dry ingredients. I went back and forth about the pumpkin spice. I’ve made pumpkin pancakes before with no spice in them and I thought it was sacrilege, but you know, they were quite good with just the pure pumpkin flavor. But, I caved in the end and decided to add the spice.

Then, I thought it would be great to brighten the flavor with a little citrus. A little bit of orange zest goes a long way, so I zested half an orange and added it to the mix. My Fluffy Buttermilk Biscuits don’t add any sweetener, but I thought this iteration could use just a touch, so I settled on maple syrup. That’s right…these unassuming Pumpkin Buttermilk Biscuits have pumpkin and pumpkin spice…but they also have orange and maple. I’d say they are a perfect idea for Thanksgiving breakfast, or if you want to add something fun to your bread basket for the big meal. 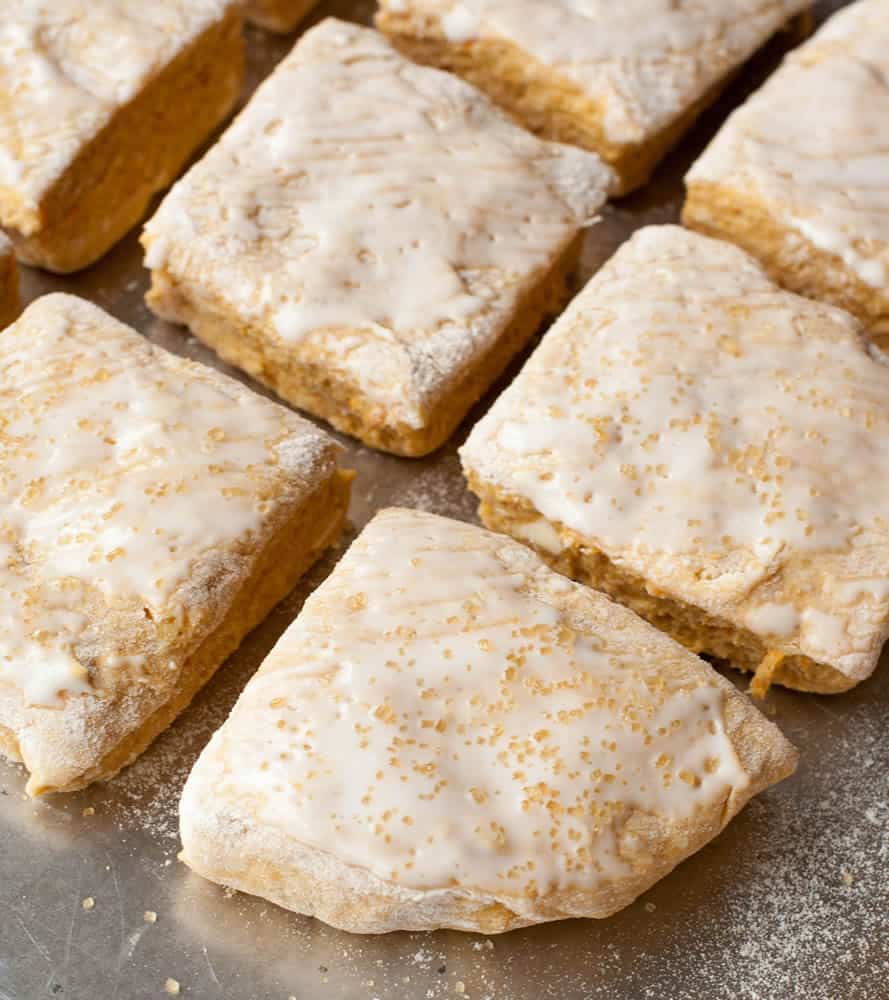 The dough came together much like the original recipe. I think it needed just a touch extra mixing and light kneading to get it to a perfectly soft dough, but that was it. (Check out these videos to see how it’s done.)  A brush of buttermilk and a sprinkling of raw sugar and they were ready for the oven.

They rose beautifully and the color was gorgeous deep golden amber brown. The texture came out perfectly as well, nice and fluffy. Of course, the pumpkin spice and orange made the house smell amazing while they were baking. 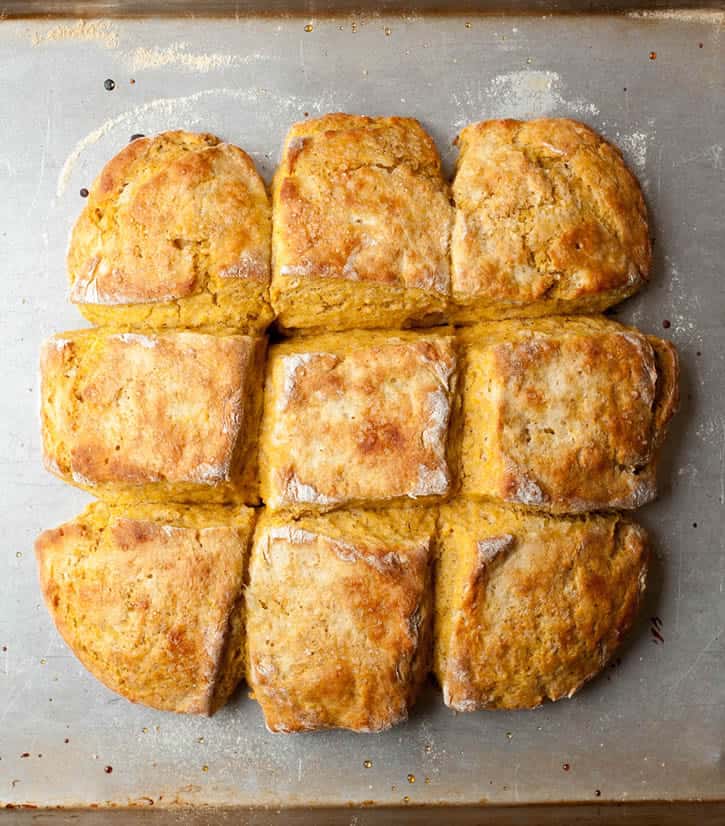 The flavor was nicely spiced with the orange flavor coming through clearly. I wasn’t sure if I would love the addition of orange, but it made it a little more exciting than just a pumpkin spiced biscuit. If you don’t want the orange to interfere with your pumpkin, it’s optional, so you can leave it out. I used maple syrup in the dough to give it just a little bit of sweetness, but I didn’t want to turn it into a very sweet biscuit. That way, you can use it as a bread choice with a meal without feeling like you’re eating cake. (Not that I personally have an issue with that :)

However…once you open it up and it’s hot and steamy and you slather some butter on it? All bets are off… 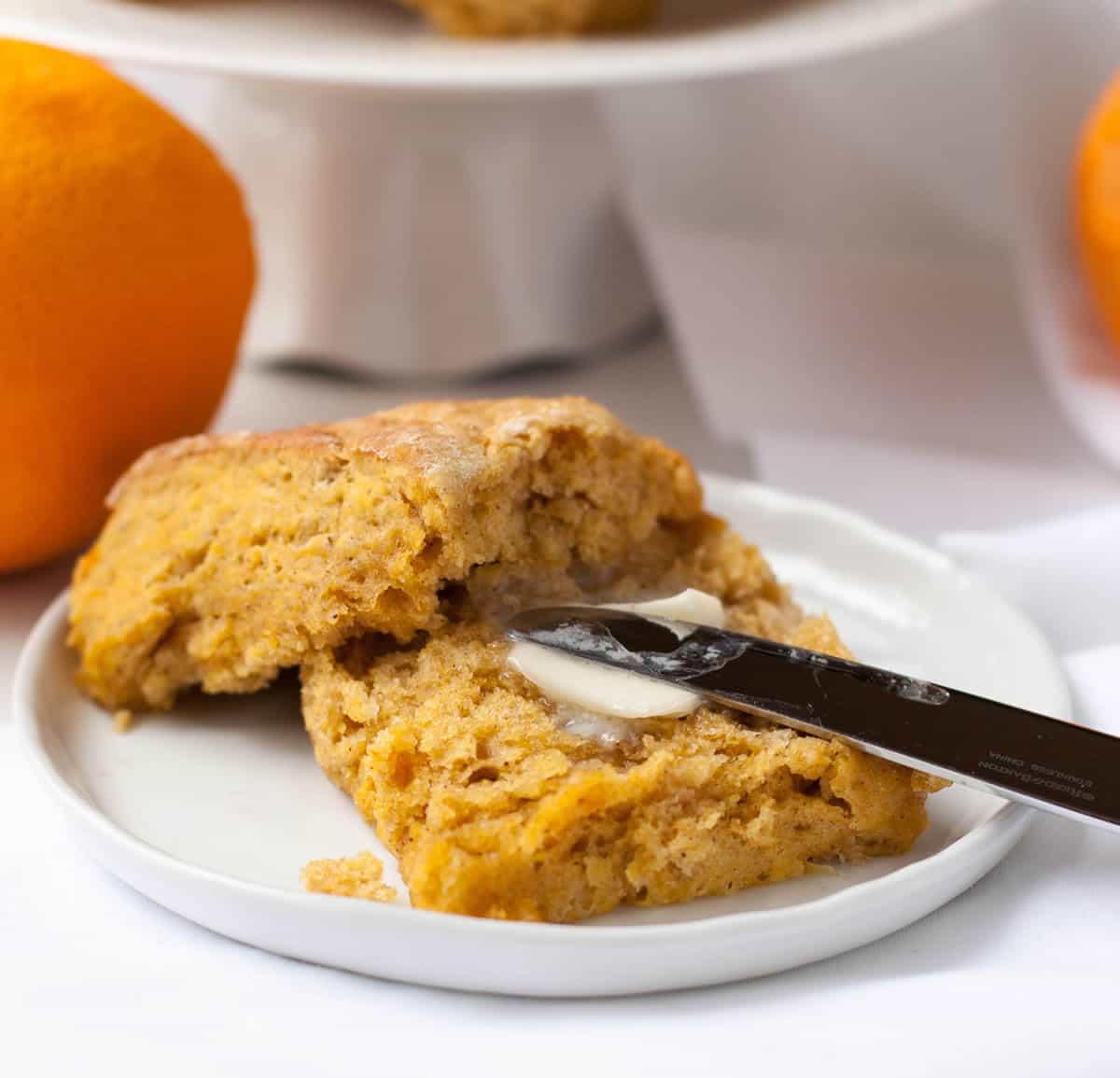 I ate one half with just the butter…and the other half I drizzled with some maple syrup. Normally honey is my sweeter of choice for a biscuit, but I wanted to echo the maple that was already in the biscuit. And, oh…that was a good choice. I should have taken a shot of that…I even considered taking a a shot of a biscuit tower with maple syrup dripping gloriously down the sides…but I thought, what am I going to do with a tower of sticky biscuits? You know, someone has to eat that tower and there wasn’t a crowd of people hanging out with me while I was shooting…and Thanksgiving is just days away…so I exercised restraint.

But just look at that butter melting on that hot biscuit…you can smell the pumpkin spice and the orange wafting up from the plate. Go ahead…pour on a little maple syrup… 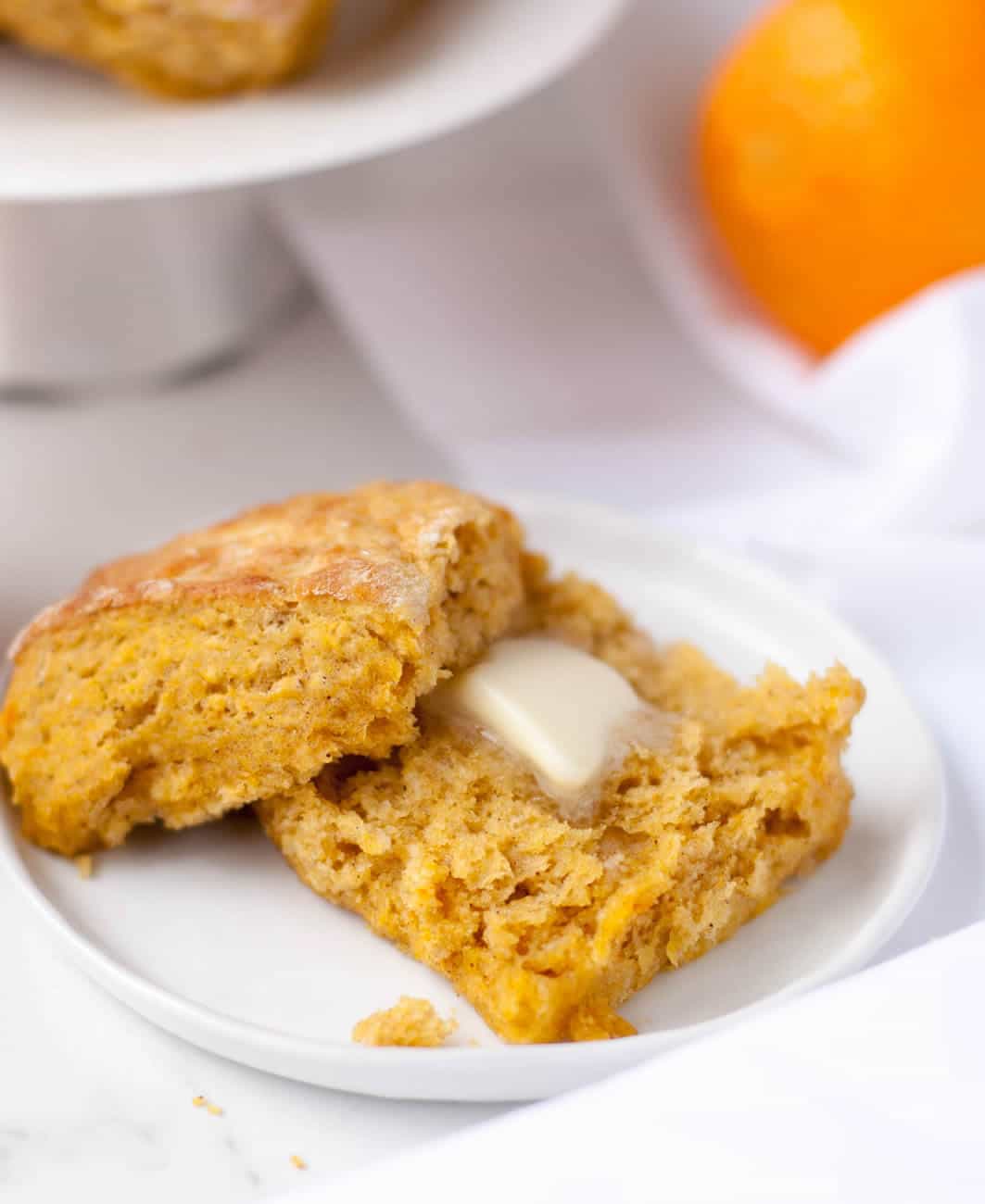 *Baked biscuits can be stored overnight at room temperature, wrapped lightly in foil. Even though they are best the first day, they reheat nicely in a toaster oven.

*You can completely eliminate the orange zest or reduce the amount to just a pinch for a lighter hint of orange flavor.

*If you prefer cutting your biscuits into shapes, roll or pat the dough and cut with a floured cutter. Push straight down with the cutter and do not twist to release it as you may seal the edges of the dough, making it more difficult for them to rise. Re-roll the scraps and cut again. (This is not my preferred method)

YUM YUM YUM! I have one of these fresh from the oven and slathered in butter in my hand as we speak. The flavor is awesome; I appreciate the "raw" pumpkin flavor as opposed to a super sweet pumpkin spiced la-ti-da. I definitely overmixed them probably two turns too many, so they could be flakier, but they are still delicious. It's so easy to do with biscuits, they are just don't like being touched! I am making these for Thanksgiving next week and I know my family will be jazzed about these.

Jenny, yay! A fellow biscuit lover! As I say in the recipe, I usually flatten and fold these over about 10 times. Most of those turns are just completing the mixing step once I take it out of the bowl. The rest is flattening and folding that helps create those layers. Check out the videos in my Fluffy Buttermilk Biscuit Post and you'll see exactly how I do it! Also, now that you've got this dough down pat, you can make my Pumpkin Biscuit Sticky Buns! Another yummy breakfast treat!

Will it work with gluten free flour mix?

If you read my original Fluffy Buttermilk Biscuit post, you'll see how picky I am about ingredients to get just the right texture and flavor that I want. I've never worked with gluten free flour mix, so you'd have to experiment to try it out. I certainly think it's worth the try, even if you make a half batch. They might be exactly like mine, but they might be really good in their own right:)

Oh Oh! It's me again! Sorry I'm just a little excited, but I came back to tell you that this recipe is now gracing the first row of Foodgawker!!! Woohoooooo!

Wow!...First row for a simple little biscuit? I guess you never know what's gonna ring their bells at Foodgawker :)...Thanks for all the kind words...really...I'm so grateful to have such a good foodie friend!

Oh Ramona d0 these look gooooood! I really appreciate the effort you put into developing a recipe and explaining the hows and whys behind its success. I love that you take out all the guesswork and give us everything on a silver platter. This, as well as your lovely taste in food, is exactly why I'm always so tempted to make your recipes with full confidence that they'll turn just right. For now though, I'm just gonna pin it until I find a tiny slot of time to bake for leisure...you know what I mean ?