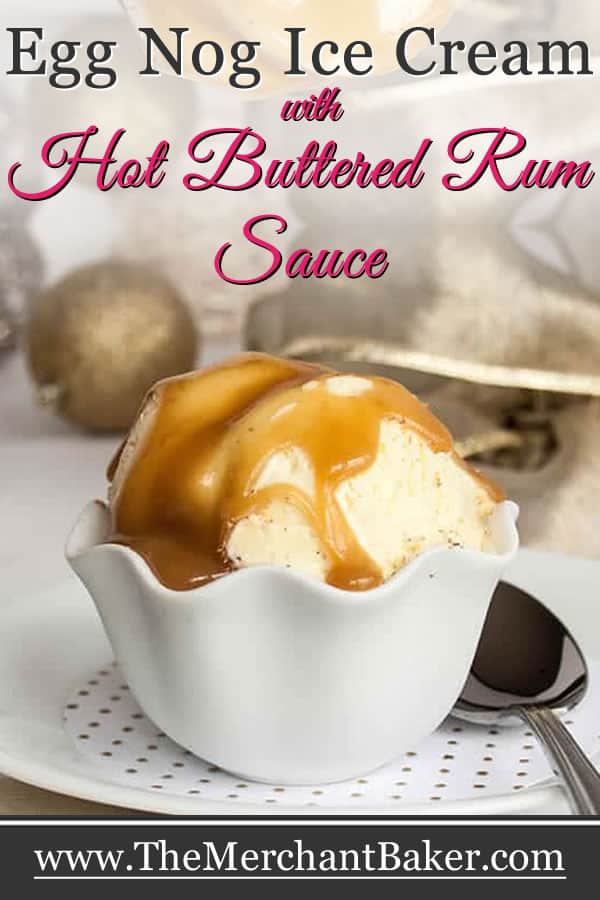 Guess where this recipe came from?

An executive recruiter.  Yes.  It’s true.  I would not have this recipe for Egg Nog Ice Cream with Hot Buttered Rum Sauce had I not met this particular recruiter.  I had left my last position and decided to take a break from the corporate world.  When I decided to see if I wanted to jump back in the game, I reconnected with recruiters I had worked with in the past and began networking with new ones.  Well, sometimes you just meet someone that you gel with…a person that in any other circumstance would be a friend.  I was lucky enough to find a couple of these great people during this particular leg of my search.  I call them, “good humans,” people with integrity and kindness that you would like know outside of the situation in which you met them.  People you would like to have live in your neighborhood, if you could create your perfect neighborhood. 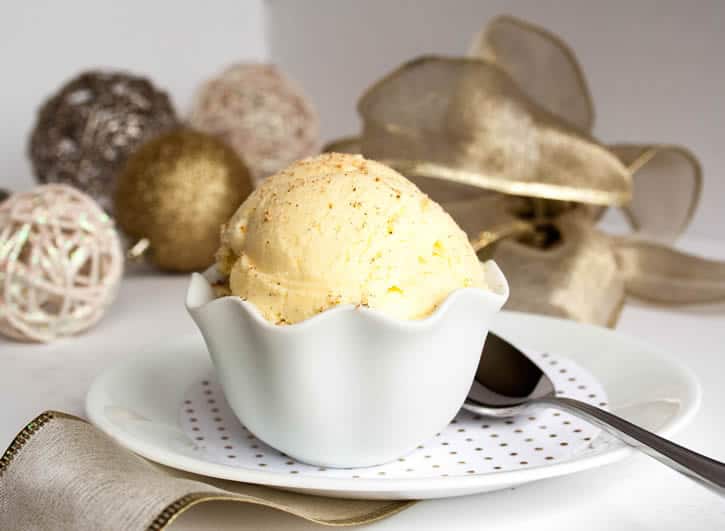 This particular recruiter was working on what I thought was a great opportunity at the time.  I was the lead candidate and, after multiple interviews, the CEO of the company told her I was perfect for the job.  My recruiter was a great advocate during the whole interview process and along the way we discovered we were both foodies. Well, that was the end of just discussing job opportunities.  We started sharing favorite recipes (I know, who’d have thought?) and began to bond over our love of baking and cooking.  After making a few of the recipes she sent, I found that we were aligned on what we liked, so I knew I would enjoy any recipe she sent to me.  One of the recipes she sent was for this ice cream. 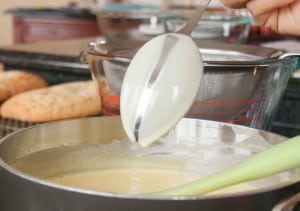 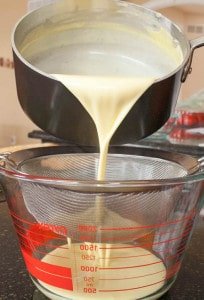 First let me say that I loooove egg nog!  When I read that there are people that are not fans, it’s hard for me to understand.  What’s not to like?  It’s vanilla custard goodness that you can drink!  I do get that it’s a splurge and I will admit that we might buy only one small carton of the good stuff during the season…and then cut it with some skim milk or almond milk so that we can drink a glass without feeling guilty.  (We also love the soy version of egg nog and it is far less guilt producing.)

I love grating fresh nutmeg on the top and getting that hint of spice with every sip.  Yes.  I am a die hard egg nog fan and use it in many different recipes.  In fact, I had to edit the recipes I chose to post this month because I ended up with four on the first draft, which is probably too many all at once.  Not for me…but just in case some of you aren’t big fans, I’ll pace myself on sharing those recipes. 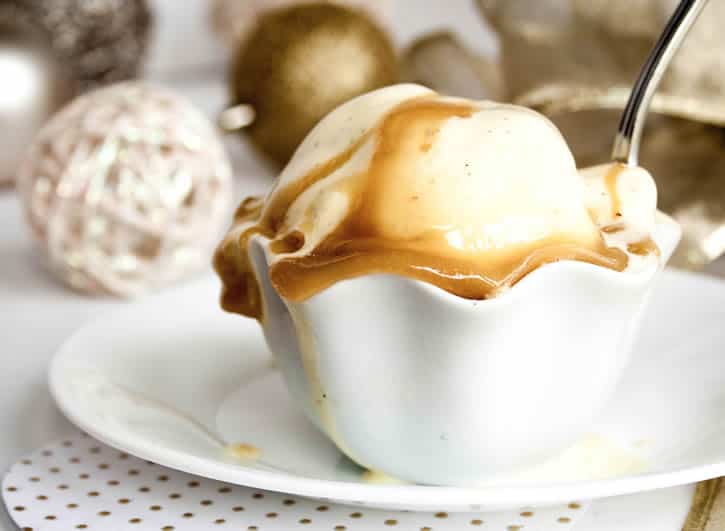 I’ve had egg nog ice cream and loved it, but never made it.  When she sent me this recipe, I thought the time had come.  I don’t make ice cream very often, but am always surprised how easy it is.  This ice cream is rich and very creamy, not guilt free, not cut with almond milk; this is the full monty.  It is custard based just like the drink for which it is named. The egg yolks give it that unmistakable egg nog French vanilla color.  A fresh vanilla bean steeps in the custard and leaves behind all of those tell tale flecks of sweet vanilla flavor.  I leave out the rum in the ice cream and opt instead to offer the Hot Buttered Rum sauce on the side. The Rum Sauce is a buttery, rummy hot caramel sauce that works perfectly with this ice cream.  If you love rum in your egg nog, then definitely add the rum and top it off with the sauce.  It’s this season’s version of a hot fudge sundae!  If not, leave it out, go sans rum sauce and just grate a bit of nutmeg on top…then again,  you could always top it off with some Buttermilk Caramel Sauce! 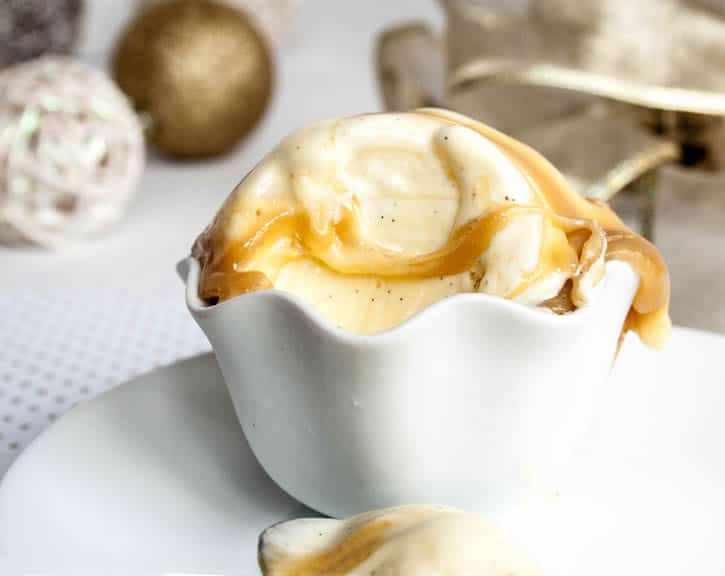 Oh yeah…that position? I didn’t get it.  Being “perfect for the job” just wasn’t good enough that time.  Oh, there were plenty of red flags along the way that warned me that maybe it wasn’t the amazing opportunity I wanted it to be.  My recruiter even commented once that perhaps I was trying to “drink this opportunity beautiful.” I think she was right and I was later thankful of the outcome.  It’s okay because I met a new “good human” and got this recipe for Egg Nog Ice Cream instead. 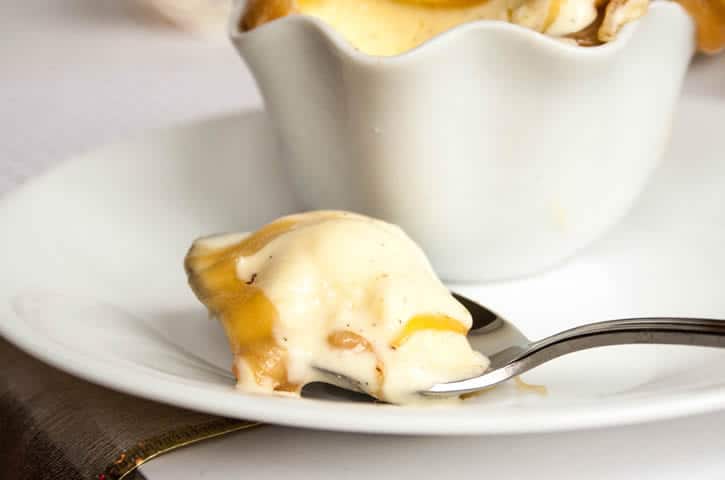 Some would say that I definitely got the better deal :)

For the ice cream:

* I don't like to put a steaming hot bowl of liquid into my refrigerator, so I place the bowl in a larger bowl filled with ice and water and stir the mixture every so often to bring it to a cooler temperature before placing it in the refrigerator.

*I put a range in for the nutmeg measurement. I love nutmeg so I used the full teaspoon. Nutmeg makes it taste like egg nog to me. If you like less, use less.

*The rum will also give it a traditional egg nog flavor if you're used to your eggnog spiked. We don't use it in the ice cream because of the kids, but if you like your desserts a little boozy and love the taste of rum, definitely add it in.

*The original recipe had 2 Tablespoons of rum in the sauce, if you like more rum, increase it to this amount. I think 1 Tablespoon gives it plenty of flavor without overpowering the sauce.

*You may need to add a pinch more of salt to your rum sauce depending upon what kind of butter you use. I love a salted caramel; the salt brings out the flavor, so season to taste.

Recipe Source from a trusted friend

I made this yesterday (with the rum sauce) and it's the best ice cream I've ever made! Thank you for a great recipe.

You're welcome Marny! I love that ice cream! It comes out so rich and creamy. Glad it worked out so well for you :)

Awesome Christmas Desserts That Are Full Of Booze | WORLD Warotter