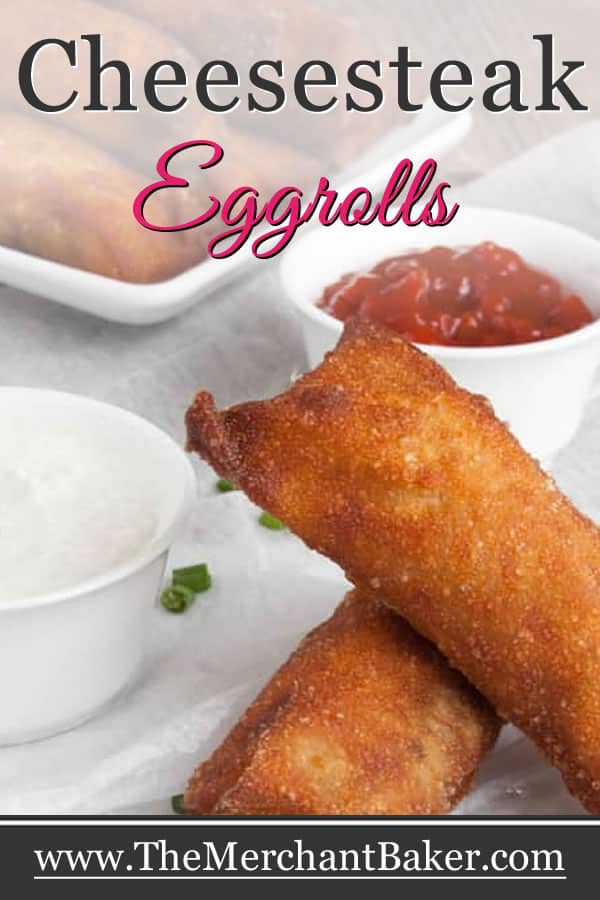 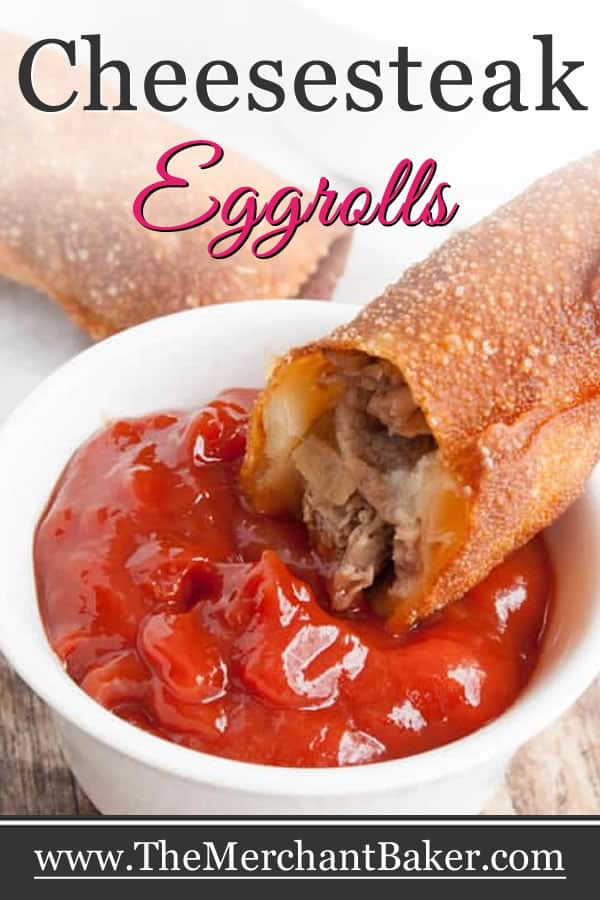 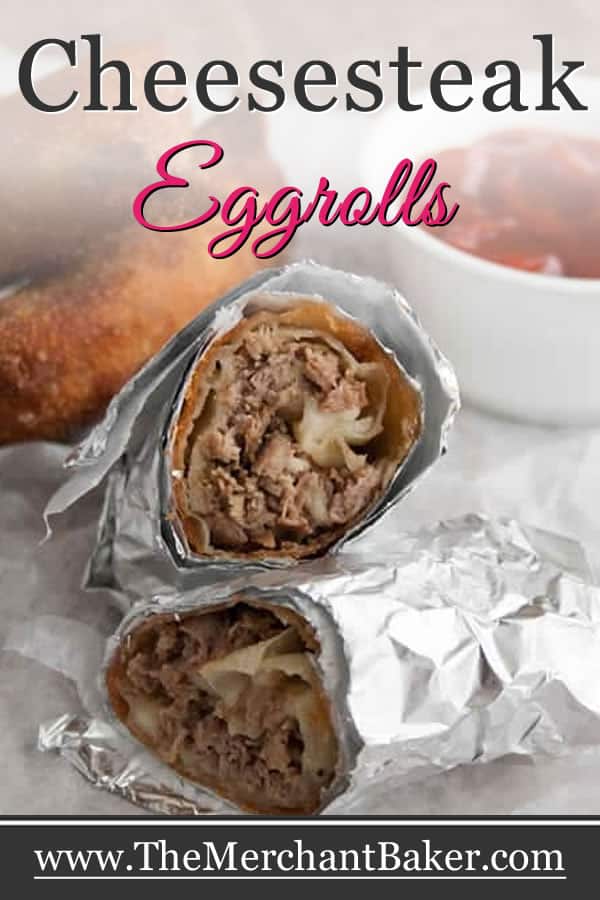 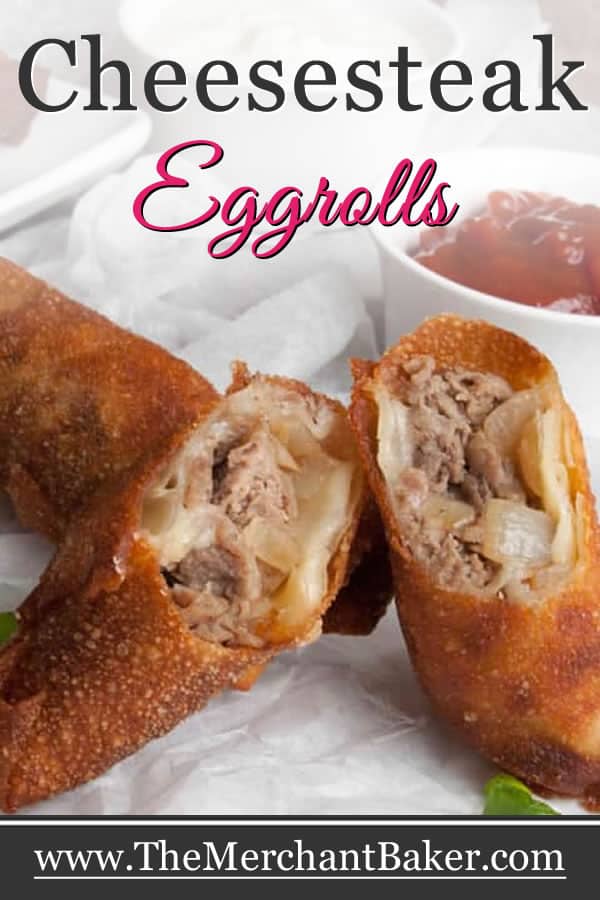 Well isn’t this the perfect little yummy dish for a blog based near Philly? 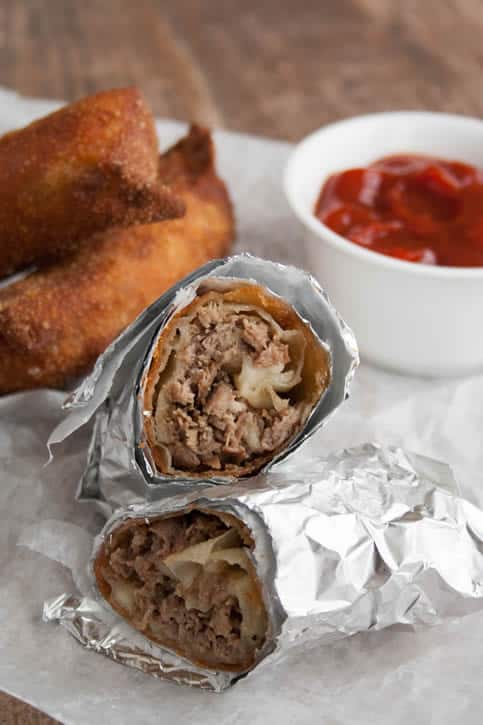 Cheesesteak eggrolls.  I grew up outside of Cleveland, so I’m not sure if cheesesteaks in any other form are sacrilege or not.  We had Steak-umms when I was a kid; I’m pretty sure they would qualify for that offense :)  My brothers and sisters and I loved them anyway. That skinny little red box in the freezer meant a fast yummy sandwich to us.

We first had this treat as an appetizer at a restaurant nearby.  It ended up becoming one of our favorite things on the menu.  An order was two eggrolls and my husband and I would split the order because the kids weren’t interested.  Then a few years passed and they became very interested, so we shared the order with them.  Everyone wanted more, so the next time, we doubled the order. With everyone fighting over the plate and still wanting more, I figured it was time to recreate this dish at home. I didn’t think it would be too difficult, having made thousands of eggrolls with my dad over the years (read more about that in this post); I certainly could make a cheesesteak eggroll. 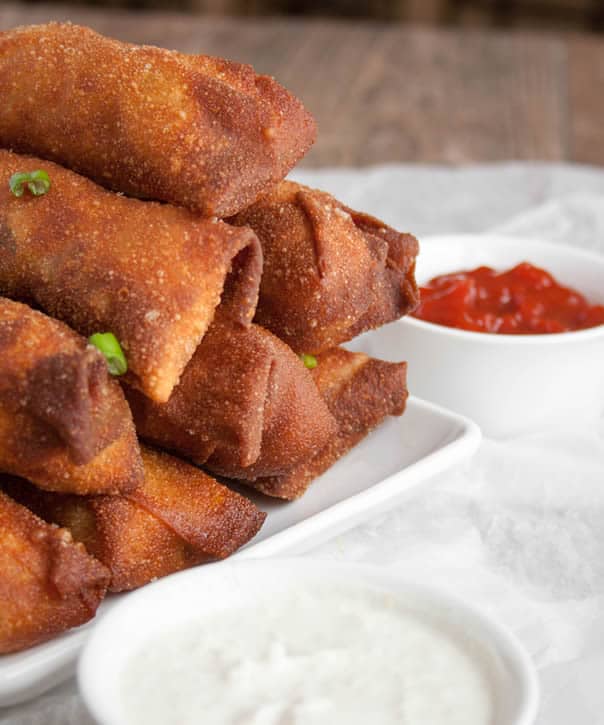 Everyone has their favorite cheesesteak in Philly.  Pat’s, Geno’s, Jim’s and Tony Luke’s are among the names you might hear, but there are many more whose names you might never have heard of that are local favorites.  We happen to like the cheesesteaks at a little pizza shop in our old neighborhood. We’d love to find one that compares closer to home, not that we eat them often.  They are a splurge treat to be sure, but if you’re going to splurge, you might as well make it worth it (yes, we will drive far for good food.) Bad cheesesteaks are really a terrible waste of a good splurge. 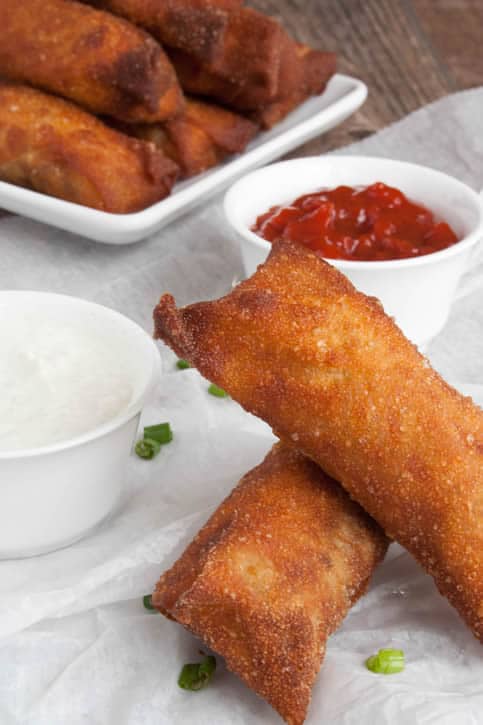 These eggrolls are a semi splurge.  They are deep fried, which is something we only do once or twice a year, max.  But they are much smaller than a cheesesteak and therefore have built in portion control. (Except that they are really, really good and you probably will eat more than just one!)  I have a good Southwestern Eggroll recipe that is both vegetarian and baked. Those are not a splurge and we make them often. I know you can bake these as well, we tried it… but they really are so much better fried. When you bite into that hot crispy wrapper and inside is tender steak, melted cheese and fried onions, you’ll say, “Yes, I’m glad I fried it.”  Ugh…soooo good! 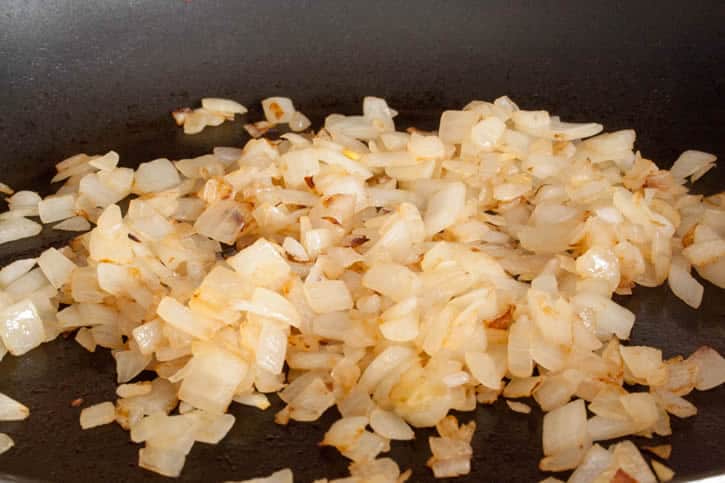 The eggrolls are filled with steak, cheese and onions. Everything is precooked and then cooled before rolling. I browned the onions a bit first to give them some color and flavor.  The onions are chopped so you don’t end up with any stringy pieces when you take a bite.  Then I used a thinly shaved steak.  If you can’t find it, the butcher can slice some up for you.  Ours was really shaved, as in I could barely separate the pieces when I cooked them.  I flash fried them in the same pan I used for the onions, and tried not to fully cook them. I achieved this by not cooking individual layers of steak which would have browned through almost as soon as they hit the pan, but instead piled about a 1/2″ of shaved beef in the pan, then separated them a bit while I cooked them.  I wanted some pink because they would be cooked further in the fryer.  Once I had a pile of cooked steak, I ran my knife through it once, in only one direction to break it up a bit, again so that it would make for an easy bite. 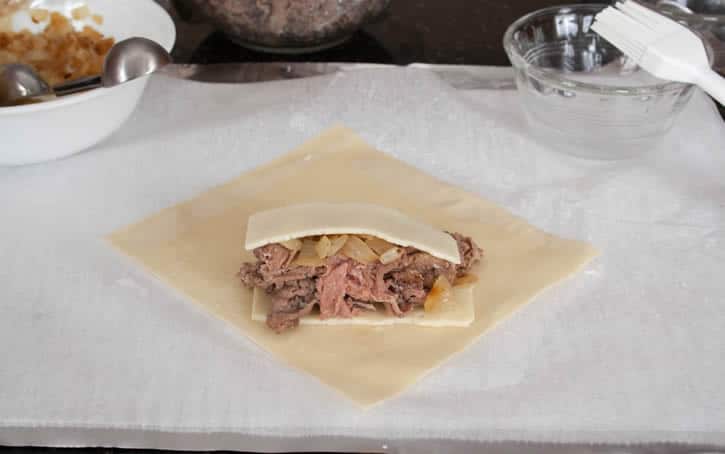 We used American cheese slices, but everyone has a preference.  I think the flavor and melting qualities work perfectly here.  I divided up the slice on the top and bottom of the meat so that it melts through evenly.  The photo shows a half slice of cheese, divided. If you put too much cheese in it, it overpowers the steak, so a thin half slice worked best.  It also makes for a neat little package to roll up.

These make a fantastic appetizer, but we had them for dinner one night and balanced the splurge with lots of vegetables for sides.  For me, two was filling enough for a meal.  As an appetizer, I’d cut them in half diagonally and prop them up on a platter with a few dips. 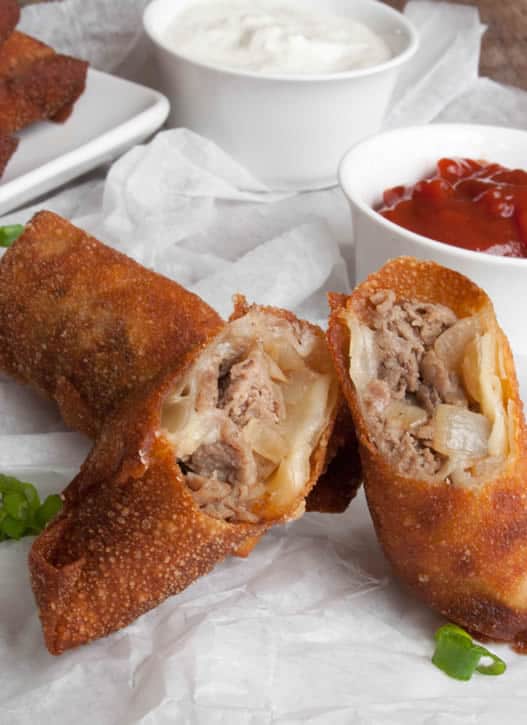 When we have traditional cheesesteaks, we order a bit of mayo on them, but for these rolls, I like good ole’ ketchup and a creamy horseradish sauce for dipping.  I actually like dipping them on my plate in both sauces for a really tasty bite.  You could make a spicy ketchup, a creamy mustard or other dip if you’d prefer; you could even go with no dip, but that’s no fun. 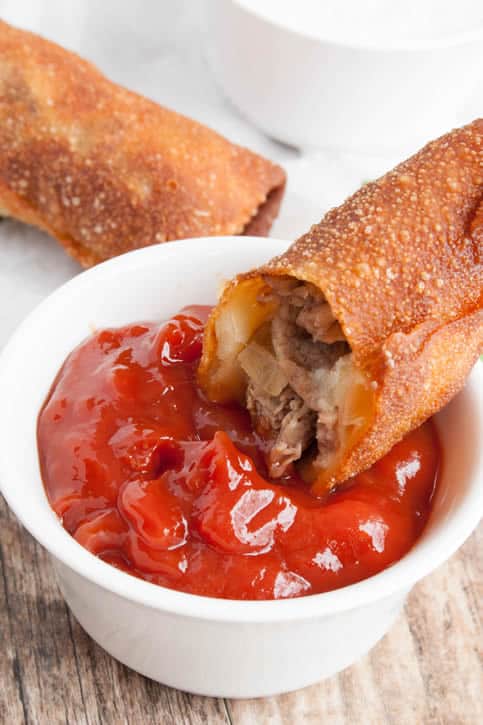 And why splurge on Cheesesteak Eggrolls if it’s not going to be fun?

These make a fantastic appetizer. Slice them diagonally in half for smaller servings, then prop them up on each other for a nice presentation.

For the horseradish sauce:

* Be sure to use an oil that has a high smoke point. Some oils, like most olive oils cannot tolerate the high temperatures of deep frying. I love using peanut oil but I've used canola or vegetable oil with success. Here's a list of smoke points for your reference.

*For the steak, I used Trader Joe's Shaved Beef Steak and it worked really well because it is sliced so thin. It's super tender with no chewy bits, which is perfect for an eggroll. Ribeye is a classic choice for cheesesteaks if you end up having to have your steak shaved by the butcher, or you could also ask your butcher for a recommendation.

*Eggrolls may be stored for up to 3 days in the refrigerator or longer in the freezer and reheated in a 375 degree oven until wrapper is crispy. Turn once halfway through reheating. If you are planning to make all of them ahead of time, I would be careful not to let them get too brown while frying as you will be planning to cook them again and you don't want them to burn. If you freeze them, I would thaw them in the refrigerator before reheating in the oven. You should also be able to bake them from a precooked frozen state, but I've never tried it.

Just reporting back that I made these for dinner last night. I did add some chopped mushrooms. Other than that everything else was the same. That sauce! ooooo!! So good I could eat it with a spoon. That would make a great sandwich spread. The eggrolls were outstanding! My mom came for dinner and said it tasted better than restaurant food. Thanks for a great recipe.

Yay! I'm so glad that you and your mom enjoyed them! My husband loves mushrooms on his cheesesteaks and I forgot to pick them up to add them in when I did this post. We're definitely going to do that next time. And, I'm with you on the sauce...perfect for a roast beef sandwich! (By the way, if you like steak recipes, you should check out the Hot and Toasty Steak Sandwich. It's another big favorite of ours.)

I just found your website and I'm so glad I did!! Can't wait to try these. Cheesesteak is my absolute favorite.

I'm so glad you found it too! They're not difficult to make and they are perfect for a die hard cheesesteak fan!

So I love Cheese Steak and I love Egg Rolls. Why not try them together?

It's a great match, that's for sure!